The Polish General Staff is working out the transfer of large military units over a distance of more than 800 kilometers. 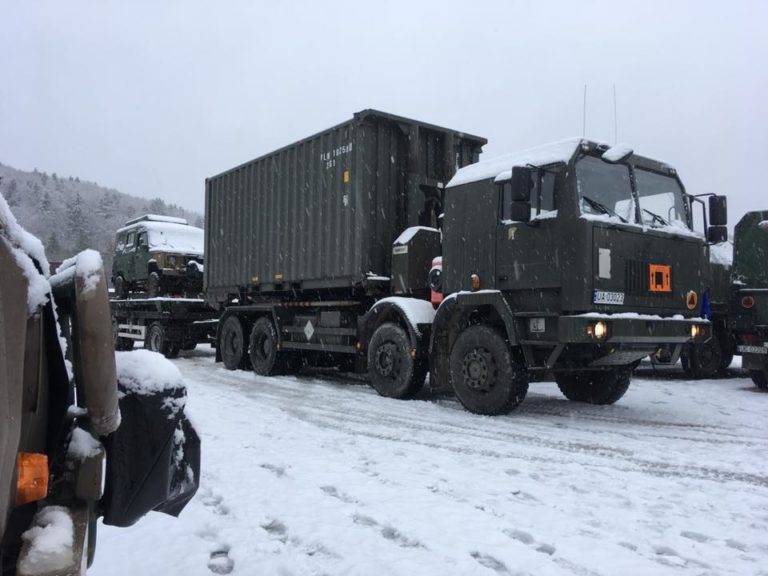 12-I mechanized brigade of ground forces of Poland began practical training for the exercise "Anaconda-18". The first stage was the transfer of military formations to the maneuvers "Allied Spirit VIII", which take place from January 15 to February 5 at the American military base Hohenfels in Germany.

Around 1200, military personnel and 300 units of military and special equipment, including the Wolverine BBM, off-road vehicles, trucks and engineering vehicles, made an 800-kilometer march. At the same time, part of the equipment (mainly wheeled) went under its own power, and the tracked vehicles were shipped by rail and road.

During the Allied Spirit VIII exercise, representatives of the 12 Mechanized Brigade will lead the multinational headquarters and work out the planning, management and logistics of subordinate international forces.

In principle, training in the march by units and units is a routine routine in the training of any armies in the world. Only here for conducting long-term marches of long duration most often requires a solid justification. After all, the resource of military equipment is quite small, and every year, due to the conduct of combat and operational training activities, has a tendency to decrease. And for the Poles, such a luxury, which is the march on 800 kilometers, is not always justified - for the sake of participation in some kind of non-standard teaching, it is in vain to spend the lifespan of technology. Moreover, such training has recently become too frequent.

Probably, the Polish General Staff began to practically work out the readiness of its armed forces to transfer a large number of military formations over long distances. And in the light of recent events, it is not even necessary to ask the question, where will the units of the Polish Army deployed in western Poland move to.

To do this, remember the transfer tanks Leopard to the Belarusian border and attempts to recreate a new (that is, well-forgotten old) division. And we are witnessing the concentration of significant forces of Poland at the borders of Belarus and Russia. Do not forget the American brigade (one full, and the other provided with equipment, it remains only to transfer personnel from across the ocean). But the 12th mechanized and 11th armored cavalry divisions are the second strategic echelon. Such a quantity of troops is enough for conducting offensive operations in the eastern direction.

It is strange that only the Poles and the Balts so actively support the policy of the United States to strengthen the military presence on the eastern flank of NATO. For all other member countries of the Alliance, such rhetoric is already pretty tired, and, as a rule, they try to manage only by accepting any agreements without increasing their armed forces dramatically. However, that Warsaw, Vilnius with Riga and Tallinn have just not stood on their hind legs in front of Washington. It is said that it is necessary to increase the military budget - please! But in recent years, Poland and the Baltic countries have been confidently leading among all other European countries in terms of the increase in defense spending.

Only now such an arms race may well turn the other side. Nothing good will come of it. But it is quite possible to force Minsk to strengthen its troops near the western borders or to expand the Russian military presence on the Belarusian territory.

Ctrl Enter
Noticed oshЫbku Highlight text and press. Ctrl + Enter
We are
For Latvia will fit, for England is no longerMilitary reform as an integral part of the security concept of the Russian Federation: Systematic dynamic assessment
16 comments
Information
Dear reader, to leave comments on the publication, you must to register.