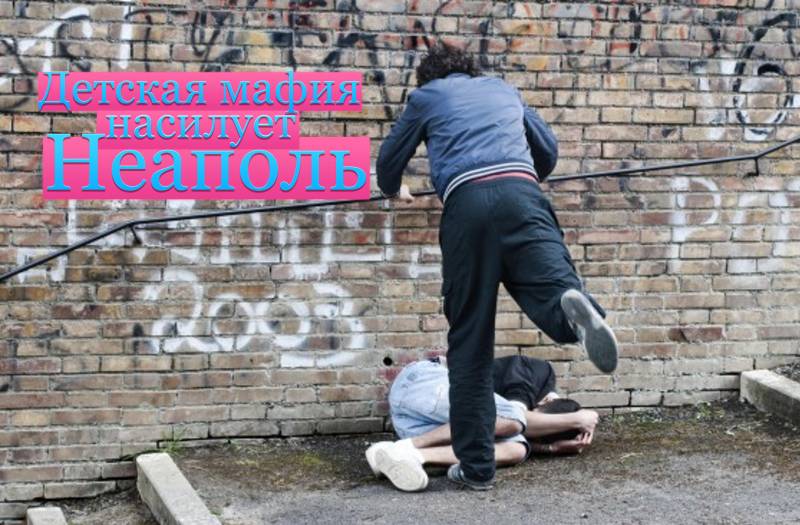 The wave of child aggression that swept all countries of the world raises the global question to humanity: “Why did we give our children to be raised by the Internet and mass media?”

And again Naples, beautiful and terrible. Mafia again. Again unjustified cruelty. This time, the young members of the Camorra gangs take to the scene of organized crime. And again, linguistic journalists are right there. The phenomenon is called the "gang of children" (baby gangs). It seems that Italian society pays more attention to the clarity of definitions than to interference in the process of imminent dehumanization of adolescents.

The great son of Italy, Sandro Botticelli, who wrote The Birth of Venus and the illustrations for Hell by Dante Alighieri, dreamed in his 13 years to become a skilled jeweler, and a little later an outstanding artist. The incredible Michelangelo Buonarotti, author of The Creation of Adam and The Roman Pieta (Lamentation of Christ), studied hard at 14 for years at an art school where he was noticed by the great Lorenzo de Medici, the ruler of Florence. 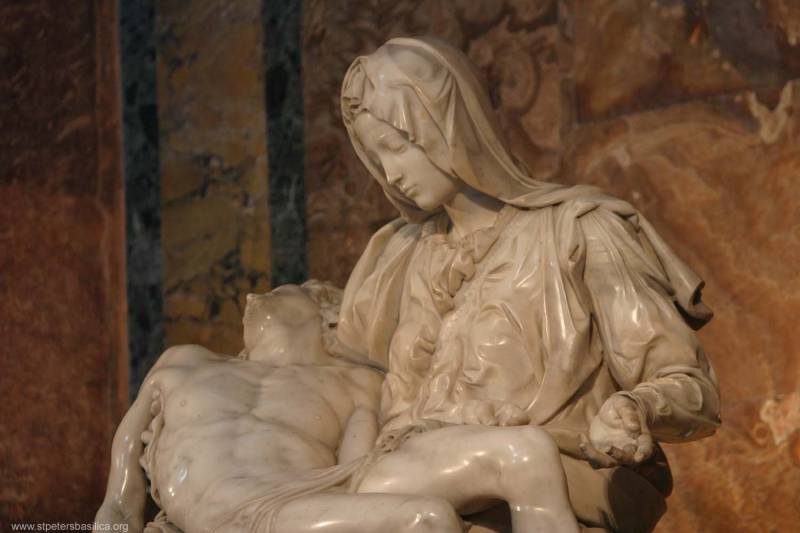 "Lamentation of Christ" by Michelangelo Buonarotti 1499.

The current teenagers in Italy, and especially the city of Naples, do not have to dream of high. All needs and dreams are crumpled up to the banal: beat the weak, steal money, eat well and pick up beautiful girls. But everything became simple and understandable, albeit primitive, as if in an article about basic, base human needs: needs for domination, profit, sex.

Recently, a march took place in Naples, the purpose of which was to show the position of a society condemning the aggression of minors. By the way, Italians love marches and demonstrations for any reason. This is an excellent occasion to meet friends who have not been seen for a long time. Let him not solve the march of all the problems, as the “team of KVR of KVN” would sing, but it would be more joyful for everyone, more fun for everyone.

There are enough reasons for such processions in Naples. Over the past two months, children have carried out more 20 store robberies, more 5 attacks on peers, more 30 acts of disturbing public order.

The “Great March of Solidarity” gathered all those who were outraged by the murder of 17-year-old teenager Arturo, who had been slaughtered by gang members in the throat near the metro station, and many unreasonably beaten children throughout the city. At such mass actions, people, holding posters "Stop violence", do not lose their benevolent disposition and are quite smiling, which may surprise an unwitting witness. 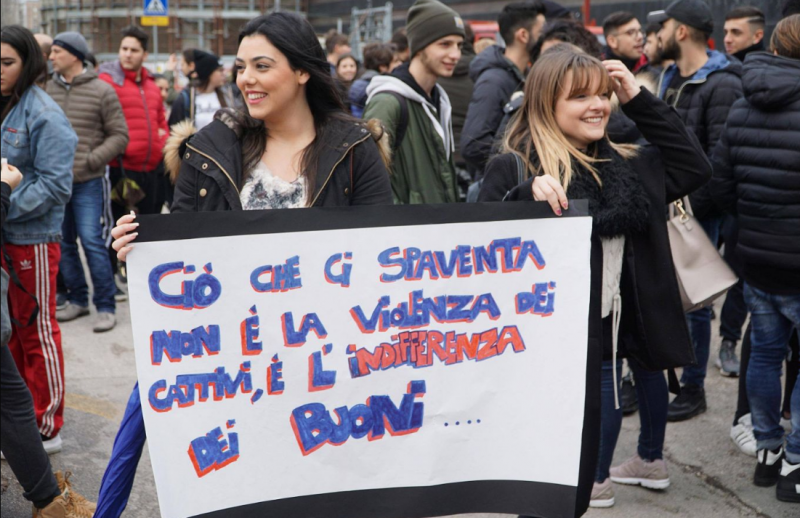 We have already written in previous articles that teenagers from Camorra are not even afraid of the military with machine guns when they interfere with the passage of their scooters. At the end of 2017, the case began to escalate, and the young Camorist began to probe the zone of the permitted, committing bold and strange crimes.

The thieves of tradition.

On New Year's holidays in the shopping gallery "Galleria Umberto I", a symbol of beauty, art and leisure, loved by tourists, a beautiful fir tree is set up, to which residents and guests of the city come to hang little notes with their secret desires on the branch. A wonderful tradition that was barbarously broken literally a few days after the installation of spruce. At night, several teenagers cut down a fir tree with a chainsaw and dragged the tree into the next quarter, where they simply threw it away. And for December 2017, the same thing happened twice! Thus, one of the “children's gangs” declared itself, frightening the competitors with the level of its serious attitude. Plank of absurd asocial behavior was fought. Socialist barbaric competition won. 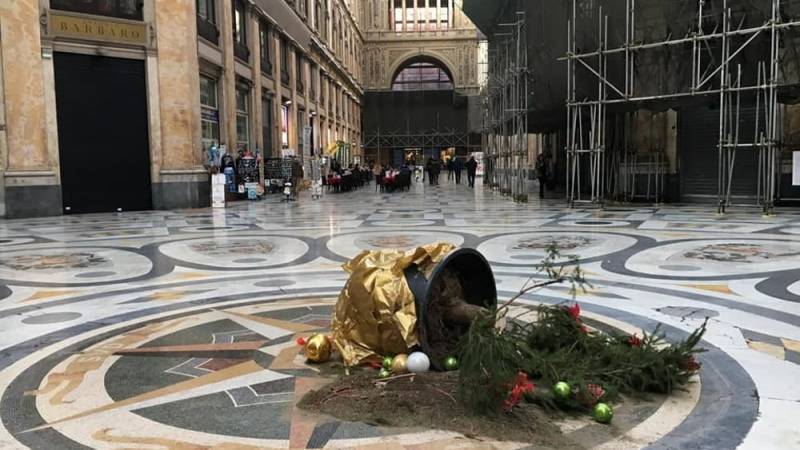 Remains of tradition in the center of Naples

By the way, adolescents have chosen this wonderful platform inside the gallery for their nightly activities - after 22: 00 it is used as a field for night football or as a track for racing scooters, or as a place for the demonstrative humiliation of the homeless. The reader may be asked the question “Where are the police looking?” (And wrinkles may frown over the bridge of nose). For Italian reality, this is an open question - apparently, the police have more important things to do. Although one of the municipal officials said that closing the gallery at night would be an insult to the city. Such strange in terms of order in the city statements and intertwined in a special Italian reality, which is difficult for a foreigner to understand. In our opinion, it would be easier to arrest all violators, close the gallery for the night. Or maybe things are not so simple ...

The governor of the region, Campania Vincenzo De Luca, spoke in favor of toughening the punishment of adolescents and announced that the punishment threshold was reduced to 16 years. There is a rule called repression, which becomes indispensable when a person wants to guarantee the peace of the community, therefore, ”concluded De Luca,“ we must also go to this level. But until they go, they just think.

The phenomenon of children's gangs. Evolution of camorra 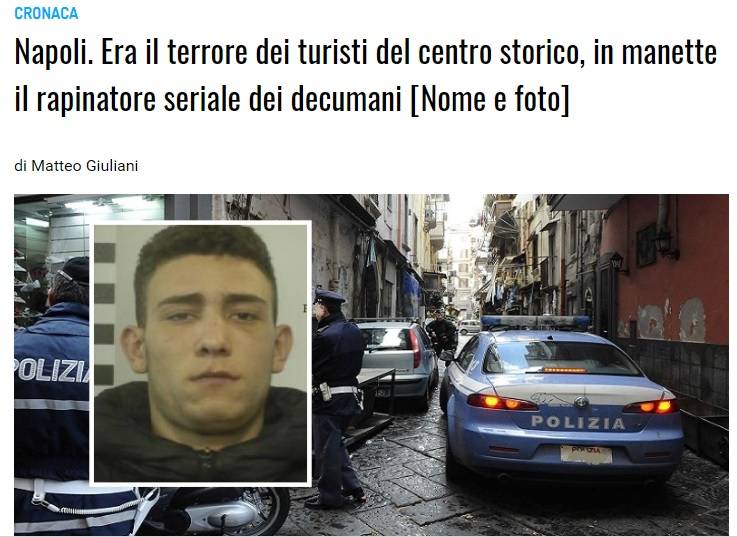 News about a teenager criminal on the Italian site

According to Roberto Saviano, the “Mafia mafia expert”, children's gangs are not a spontaneous phenomenon. This is the evolution of the mafia - the power from the elders, the so-called “dons”, is passed on to children who are in their puberty years, 14-16 years. Camorra is getting younger by empowering its young members. The elders, like the aristocracy, go into the shadows, controlling the process of their palaces. So safer and more stylish, like in the movies.

We can observe evolutionary processes when the mafia tends to be similar to the heroes of the films about the mafia, whose directors are ahead of each other in terms of “proximity to reality”, painting the Camorist more aggressive and meaner, which actually makes the real Camorist more evil and more aggressive. The vicious circle of the great of the arts! This is a very wake-up call for those who confidently say that the media does not manipulate people's minds ...

Is it being treated?

The other day Marco Rossi Doria, a teacher who has worked with complex teenagers for 35 for years, an expert from the Ministry of Education, arrived in Naples. His task is to analyze the origins of child aggression and propose solutions to the problem. 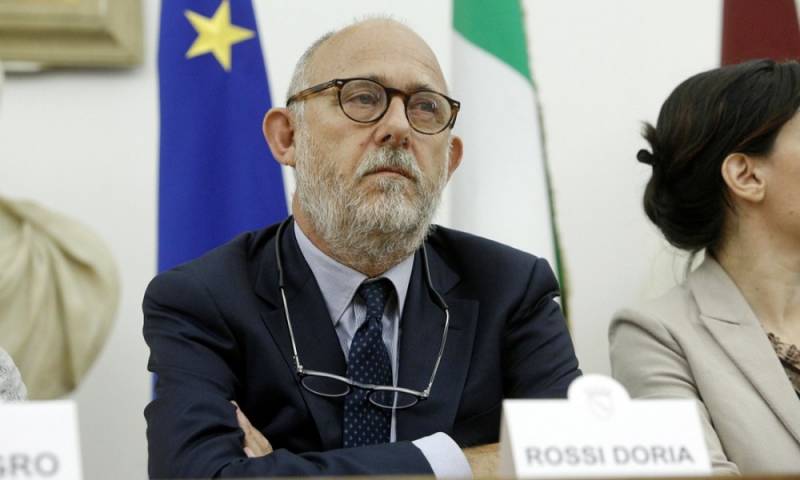 This is how Marco Rossi described the problem and suggested a way out of the emerging madness. The reader is invited to read the thoughts of the Italian expert on education, and to represent the schools of Perm and Ulan-Ude.

The picture is complex and must be seen. In Naples, there is the problem of having a state. It is a large city with high rates of social exclusion and a strong influence of organized crime. We do not know exactly what it is, but this phenomenon coincides with the model of Cormora, which simplifies the search for a solution.

From a descriptive point of view, these are groups of young children, whose families are not only poor, they are “broken up”, incomplete, they have one parent and they either do not work, or are at the lowest level of the hierarchy of organized crime. They live on the edge of already marginal areas and communities, and even within these communities are considered marginal.

The parents of these children do not have an understanding of how to raise a child.

Children do not go to school, they sit without any action, they ride scooters around the district, and at some point they come to mind to do something, get into an adventure, and in a few minutes they make a terrible catastrophe against anyone who happened to be in front of them. These guys don't have to have weapon, they are ready to fight with bare hands or kick their weak legs. These children were not intercepted by any adult figure in time: a sensible grandfather, a caring grandmother, a pastor, or a volunteer ... At some point they become a time bomb.

Violence is reduced if a system is created that brings together local educational communities. But it is very important - for a long time, with constant action.

In addition to school, youth centers are needed, in which adolescents will work, live by “adventures” and problems of their city, be useful to it.

We need regular sports, social projects, support for youth entrepreneurship. At risk include adolescents from 10 to 25 years. And all the listed strategic actions, which were known before, need not stop at least the next 10 years. Only then will the result.

We need a more flexible, closer school, a real vocational training. We need strong alliances between teachers and street teachers who are able to have proximity to territories that are within limits and act as antennas, who understand what children are, who tend to go beyond, and who are able to intercept them, suggesting alternative activities, where they can study and test themselves. Obviously, this offer cannot last one semester, it should last 5-10 years.

If government policy supports investments in the educational community, in territorial education, in the medium term, we can count on saving children. In addition to all this, there should be not so much a change in the law, but a certainty of sanctions, not even criminal ones: the educational program should be implemented, its implementation should be strictly observed and monitored. And if a teenager needs special help because of social problems, you need to listen to this. 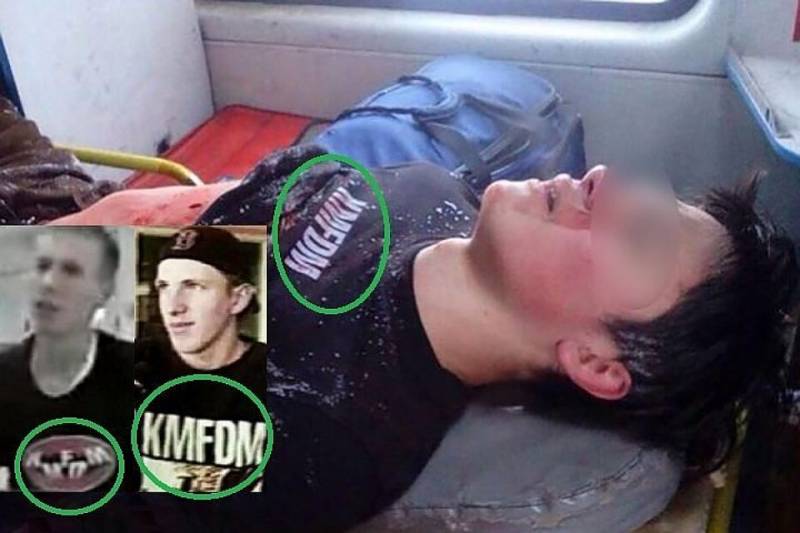 A great skill is to learn from the mistakes of others. When you try to understand the origins of aggression among Italian adolescents, you immediately begin to recall the latest events in Russia, in schools where teenagers took up arms to tell the world something.

An analysis of the phenomenon from Marco Rossi Doria is quite realistic. And if you put together all his conclusions, only one proposition comes out: children who are no longer loved by their parents take knives in their hands in order to regain their love and respect.

Children must remain children - in all the charm of their desire to develop and comprehend the world. When computer games and social networks verified by psychologists according to all canons of addiction development get in the way of this aspiration, children who have not received the love of their parents as an alternative go to the virtual world created by evil geniuses, fully accepting its rules.

Why do we give our children to educate the Internet and the media? Because we are afraid to make mistakes and because it is easier to give a tablet with the cartoon “Masha and the Bear” into the hands of a three-year-old child than to entice him with a game or live communication.

What can we do to save our children? It's simple - learn to love them!