Things and thoughts of Uncle Sam will survive a century. How to draw money from the whole world

January 31 2018
20
Budget deficit? No problem! Washington has already come up with a new strategy. More precisely, he revived the old one. After all, the new is well forgotten old. However, the US Treasury Department did not forget anything. When debts are big, you have to remember them. And make new debts. 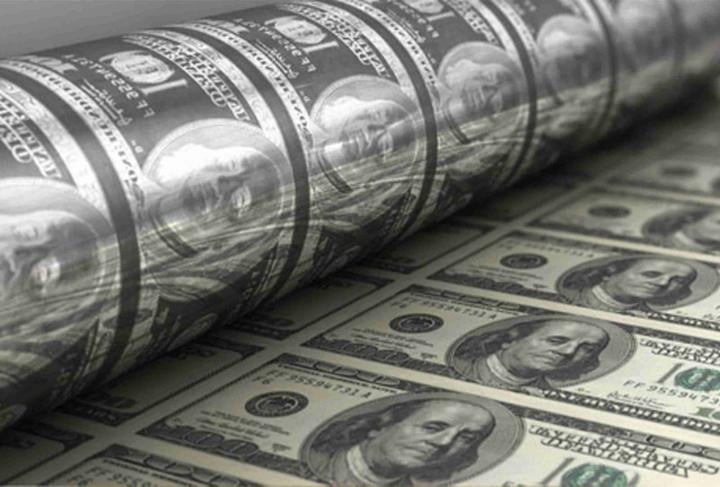 World hegemon decided to collect money from around the world. This is the good old plan that has already begun to be implemented. Things and thoughts of Uncle Sam will survive a century.

Washington plans to collect money all over the world on a voluntary basis. Let the rich, who have what to buy American debt securities, again throw off and help the great America to survive.

Most recently, the United States talked almost about the revival of American industry and the rise of the native economy, as well as the change of debt policy along with the Fed policy, and here you are! Truly, Mr. Trump is unpredictable.

However, it may be, everything is exactly the opposite. Trump needs to finance the arms race he has unleashed. So the financial policy is changing: Obama did one thing, Trump another. In the end, the last one for the Nobel Peace Prize does not hunt.

Here is a fresh message from Bloomberg Markets. The pages of this respected publication speaks of US Treasury bonds. About those whose release was slowed down. It turns out that now the US Treasury has planned ... correctly, to increase the placement of treasury securities! This is the first time since 2010. At least, Bloomberg says so, and in matters of finance he can be trusted with a hundred percent.

However, the decision of the Ministry of Finance was partly expected: the deficit of the American budget is growing. Not by the day, but by the hour. Treasury securities are just needed to reduce it. Financiers call these papers "a source of additional financing." At the same time, it must be remembered that this financing is quite real: real dollars are laid out for each nominated piece of paper, and the people who lay them out are called proudly “investors” (in common language - speculators).

The US Treasury Department is expected to publish a plan to increase sales of securities called US Treasury for the first time since the end of 2009, and the issue will be aimed at reducing the budget deficit. "Bloomberg" indicates that this very deficit is likely to reach the worst performance this year for "many years."

January 31 is the day when the office of Stephen Mnuchin officially announces plans to finance the state budget deficit. This is the plan for the next three months.

Wall Street forecasters are already anticipating large sales of securities, while speculators are predicting a rapid increase in supply. It is assumed that, according to the plans of the American Ministry of Finance, debt obligations of more than a trillion dollars will be issued. This huge amount sets a kind of record with 2010 of the year, if we take into account the sale of securities with short and medium term maturities.

Such a financial "background", the newspaper notes, contributes to forecasts of a relatively flat yield curve in 2018. In addition, one should take into account the expectations of the plans of the Federal Reserve System, which intends to raise rates as inflation increases.

Experts do not see all this in a rainbow of light. And even doubt the demand - or rather, in the reaction of buyers to the offer. There will be a question of price.

Economist Torsten Slok, a specialist in international finance from Deutsche Bank AG, argues that “there will always be demand,” but “the question is: at what price.”

America is “in the know,” the publication ironically says that it will have to “go even further beyond the red line” in order to pay for the growth of its expenditures on social security, medical care and an increase in interest expenditures on debts. This trend has intensified even more when Trump started a “tax adjustment” and conducted it last month. The Trump administration stated that its tax legislative initiatives would stimulate economic growth and “cover lost profits.” Meanwhile, the assessment of the US Congress shows that changes in the tax scenario of the Trump team will increase the budget deficit by more than 1 trillion. dollars over the next decade.

Douglas Holtz-Ikin (Douglas Holtz-Eakin), president of the American Action Forum (Washington), said that at first the country was on an “unmistakably ascending trajectory”, but then “tax laws” spoiled everything. And indeed: it smells like kerosene. The other day, the United States released its largest budget deficit, which has been since 2013. Well, the forecast is absolutely terrible: the Congressional Budget Office, even without taking into account tax reform, predicts that by 2027, the US government debt will increase by more than 10 trillions of dollars!

What can be said about the rapid growth of the budget deficit and the next increase in Washington's borrowings?

First, it is obvious that this is a direct consequence of Trump’s policy, which unleashed the arms race according to the recipes of his idol Reagan, in which military expenditures ate up to ten percent of the state budget. The growth of US government debt is largely the result of the policy of militarism, not only of Trump, but also of his predecessors. A particularly large increase in debt was recorded under Bush Jr. and then under Obama, who, in essence, received an unfavorable legacy from his predecessor, who unleashed two wars: in Afghanistan and in Iraq. Both wars became protracted and exhausting financially. Obama, having fought in Libya, then tried to reduce military spending and even came up with a ten-year plan to reduce them, but he only managed to start. Trump with these plans to reduce military spending ended in one fell swoop. The reason: “Russians are coming.”

Secondly, the financiers of the USA did not invent anything new. Huge holes in the budget will be plugged in the same way as before: by drawing money from the whole world. The US Treasury paper is considered reliable and offers the owner a small but steady income. As long as the dollar remains a strong key currency, you can issue these notes and, as the Trump team believes, is necessary. Interestingly, the US government bonds like to buy in Russia. Last year Kremlin investments in US Treasuries put Russia for 13-place in the list of the largest US lenders. Some analysts from the Russian Federation even call such an investment strategy the financing of the economy of the enemy. And how dare they? After all, everyone knows: money does not smell. Therefore, in connection with the release of a new portion of US Treasuries, we will wait for Russia to move higher on the list of creditors.

Third, there is the issue of inflation. And this is where Trump’s team understands something that’s not surprising, but impossible. Most likely, the President of the United States is cunning in this matter (he is no stranger to this, American newspapers have repeatedly accused him of lying even before he became president). The fact is that if the US Treasury Secretary Mr. Mnuchin in Davos spoke for a weak dollar and even said that the weak exchange rate is in Washington’s interests, Mr. Trump in the same Davos told the general public that he wants to see a “strong dollar” and suddenly stated that the dollar is just getting stronger.

Experts just opened their mouths, and something suggested that Trump forms fake news.

Recall that since Trump took office, the US dollar has lost 18% against the euro.

So, understand where the American finances are going.

Observed and commented on Oleg Chuvakin
- especially for topwar.ru
Ctrl Enter
Noticed oshЫbku Highlight text and press. Ctrl + Enter
We are
Overseas ally? Donald Trump - US Presidential CandidateResults of the week. “In our cooperative, the board is always agreed”
20 comments
Information
Dear reader, to leave comments on the publication, you must to register.