Why are they afraid of us and we are not?

January 30 2018
134
Interestingly, have you ever paid attention to oncoming people on the street? Just like that, without any particular interest. Have you seen a lot of scary things on the street? People who would even scare you with their own views? Is it scary to be on the street of your native city today? Or do you belong just to those who are afraid? 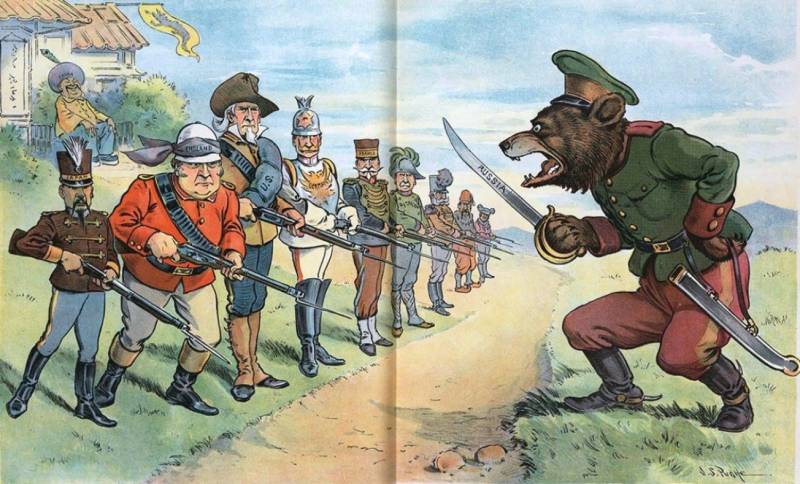 On the contrary. It is quite normal, beautiful and not very. Cheerful and sad. Carefree and busy. Men and women, boys and girls, old men and old women. With different hair color, with different noses, different eyes, different tongues, different facial oval. But normal, kindly and benevolent.

Have you ever wondered why we are all considered to be monsters? They are afraid of us! Russian for the West is a priori criminal. A priori, a man who only thinks about how to kill, rob, rape, steal. Russian soldier is always a conqueror. Even when it frees someone from a concentration camp. Even if destroys fascism. Because Russian!

We were originally a thorn in the eye of "civilized humanity." We are incomprehensible! We swear inside our own country, we call each other some nicknames. We are always unhappy with power. We are always dissatisfied with life. We always doubt.

That is why the usual expression once appeared: a colossus with feet of clay. How many millions of "civilized" belief in the correctness of this expression cost life. How many bones of these warriors rest in our land.

In fact, everything is both simpler and more complicated. We and the global "they" look at the world differently. We look at Europe and America in the same way as we look at the neighboring region. And Europeans see us as a neighboring European country. We perceive ourselves as “we” and, accordingly, perceive Europeans in the same way. Europe has never been "we." Europe is always "I."

Let's remember the story. How many times have they tried to conquer us? Almost from all sides. Completely different nations. And it always ended in failure for the conquerors. Only the Mongols had more or less successful conquest. And then because of the fragmentation of the Russian principalities. Gathered in a heap and kicked out the invaders.

Who spoke against the army of a united Europe? Only ethnic Russians? Not! Speech Russian! In the memoirs of the participants of that war one can often read about some unknown cavalrymen, who were dressed in a completely unthinkable for the Russian army uniform, absolutely did not speak Russian. And the Europeans smashed so that the drape was perceived as a feat. And there were still infantrymen, Cossacks, militiamen, partisans ...

And all this motley, mixed-voiced, mixed army crushed the victors of many European nations in the tail and mane. Hulk in Russia. Thunder in Europe. These were the Russians!

And what happened in the opposite army? And there things were going on exactly the opposite. Soldiers, officers, generals of European armies allied to Napoleon suddenly remembered that Napoleon had captured their countries. Inflamed with patriotism. And they began to scatter through "their apartments." Moreover, many rushed to the Russian emperor with the proposal of friendship and union.

Another pan-European, Hitler, united Europe in the same way. Tales about the fact that after the seizure of neighboring countries, they began to resist and fight against fascism, leave for schoolchildren. The Europeans lived quite normally under the "oppression" of the Germans.

Cut out the neighbors of the Jews. Cut out Gypsy neighbors. Cut out just neighbors. Not the Germans cut out. In Poland, the Poles slaughtered. In Ukraine, the nationalists. In Germany itself, the Germans. And so on. Look at the lists of Auschwitz employees. Overwhelmingly destroyed the captives by local residents. Poles.

But what happened next? And then the story of Napoleon repeated. In a more tragic form. With great sacrifices. But again, Europeans among the prisoners saw different Russians. Again they saw chubby Asians among the killed defenders of Moscow from Panfilov’s division. In Belarus, they saw the partisans. In the Caucasus, representatives of many nations. And they were all Russian.

And what is the enemy? It all happened again. As soon as the case smelled of defeat, the Allies ran. Cowardly, like jackals. Ran to save their own skins.

Why this excursion into history? Only in order to understand the situation of today. Nothing changed. We have genetically preserved the memory of our ancestors.

By the way, this is the problem of Ukraine. The west of the country, which historically remembered Napoleon and Hitler, and the east, which historically belongs to our world, simply do not understand each other. Therefore, military commissars cannot fulfill the conscription plan in Galicia or in the Carpathians. And vice versa, it is fully performed in Kharkov and Dnepropetrovsk.

But back to the united Europe. In modern times, the place of Napoleon or Hitler was taken by the Americans. It was the Americans who created NATO. Actually united army of Europe. Domestic and foreign policies of European countries actually solve the problems of the United States.

With what joy the Europeans participated in the victorious wars of the USA! Even microorganism countries sent their soldiers to such wars. It's nice then to say: "We plowed" ... But look at Syria. Something there is no particular desire for the Allies to fight there.

We perceive NATO in our own way. In Russian. But let's answer a simple question. If the United States suddenly stops financing the alliance and withdraws its troops from the continent, will the bloc remain? Germans rush to defend the Poles? Poles Balts? And all the French en masse?

By the way, only we call the Balts of the inhabitants of the Baltic states. For everyone else, they are citizens of Latvia, Lithuania and Estonia. And these citizens look at the neighboring states like a soldier at a louse. A sort of state farm.

Most Russians believe that in the event of a mess on the border, the Baltic states will rush to help each other. Very doubtful confidence. Will protect. But only myself. In the hope that the Americans, Germans and other allies will fight.

Today, when no one speaks seriously about the Russian attack, Lithuania, Estonia and Latvia are fighting among themselves for European money. Two beautiful and well-known examples.

Remember the decision of Belarus to build a nuclear power plant? We have not really talked about the beautiful combination of Minsk. Belarus could not build a nuclear power plant without prospects for exporting electricity. And in Lithuania, the construction of the Visaginskaya NPP was planned. It is clear that Lithuania will not pull such a construction by itself. Therefore, it was decided to make it a regional project. Then loans can be obtained in the EU.

In order for the union to collapse, Lukashenka only needed to hint that part of the Belarusian cargo traffic from Klaipeda would be redirected to the ports of Latvia. Everything!

And the terminal LNG in Klaipeda? Lithuania built, and Latvia and Estonia refused to buy expensive gas. The terminal is frozen. But there is still a disassembled railway and other little-known "Kakushki" to each other.

I repeat. Fear of Russians is based on a complete misunderstanding of our actions. We are trying to justify ourselves today. Although no one even thought to prove our guilt. We are looking for compromise in negotiations with notorious vrala. We strongly demonstrate our willingness to donate something. Even the saints for any Russian things: the country, the flag, the anthem. As it happens today in athletes.

At the same time, we showed sharp teeth in Syria. The Russian bear, as scientists have proved by experiment, has jaws an order of magnitude more powerful than tigers. And further. In any fight, be it street hooligans, war, diplomacy and all other spheres of our life, it is impossible to win, defending. Need to beat. The one who beats wins. Fist. And our people all their history was precisely this very fist, and not a delicate female palm.

Ctrl Enter
Noticed oshЫbku Highlight text and press. Ctrl + Enter
We are
Pasta Monster Ilona Mask, or the logical result of the adventureThe tragedy of the American army ("The Atlantic", USA)
134 comments
Information
Dear reader, to leave comments on the publication, you must to register.