Why did the Kazakhs go with Russia, and not with China or Dzungaria? 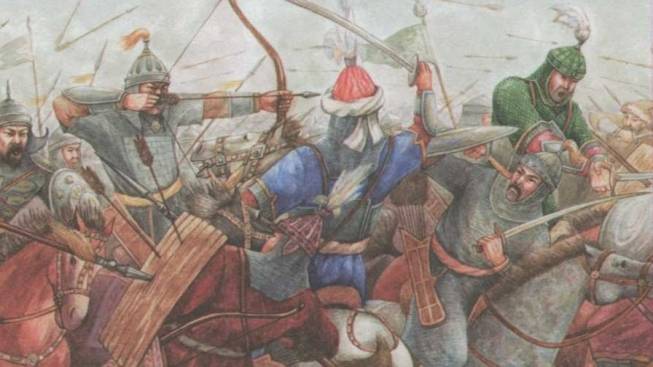 260 years ago, Dzungaria ceased to exist - the last nomadic empire on the Eurasian continent, under whose control for a long time was a part of modern territories in the east and southeast of modern Kazakhstan.

In the 18th century 40, the Kazakhs faced a difficult choice: who would they go on with: with Russia, Chinas China or Dzungaria? The most likely was the prospect of creating a single Dzungar-Kazakh state, believes Leonid Bobrov, nomadic scholar from Novosibirsk. So why this idea remained unfulfilled? And what would happen if it came true?

“The Dzungarian Khanate arose on the basis of the union of the Western Mongolian, or“ Oirat ”, tribes in 1635 year after the unifying congress of four large tribes under the auspices of the Choros princes, the scientist says. - Dzungaria can be compared with Sparta, where all aspects of life were also sharpened for war.

If you look at the Qing miniatures (the Qing Empire is a state that united the Manchus, the Chinese, and the Mongols), then you can see an interesting thing: the tsins are armed with bows, and the dzungars have guns. Dzungaria was the only nomadic state in Central Asia that managed to set up production of guns and cannons in the steppe.

And the surplus guns were sold abroad. For example, in the Russian fortress of Southern Siberia. Firearms production weapons The jungars got along with the help of captured specialists. One of them is a Swede Johann Gustav Renat, who was first captured by the Russians near Poltava, and then captured by the Dzungars. For some time Renat stabbed and dragged stones for the construction of the steppe palaces, but, having learned what valuable specialist got his hands, the Dzungarian ruler Tseven Rabdan instructed him to create an artillery park.

New ruler of Dzungaria Galdan Tseren I really didn’t want to let Renata go back to Sweden, but in the end I gave him up to insistent requests. The governor hoped that those masters whom Renat had taught would continue to pour guns. It is believed that the Swede made about twenty guns and ten mortars, but in reality there were more of them. But Renat hid it from the Russian ambassador, with a caravan of which he went to St. Petersburg. They could have arrested him for helping the Dzungars: Russia was afraid of its militant neighbors.

The ambassador, writing down data from the Swede in his diary, made a note: “Russian prisoners say that Renat did much more”. And put dots, but could not get the exact numbers. Galdan Tseren, realizing that the Russians could take revenge on Renata, sent along with the Russians his own embassy.

Upon arrival in St. Petersburg, the local authorities tried to detain Renata, but the Dzungarian ambassador rendered the Swede one last service - that was sent to his homeland without hindrance. In general, this история ended well: Renat returned to his homeland a rich man. Galdan Tseren, highly appreciating his services to Dzungaria, in parting generously gave the Swede gold and silver.

True, the most important gift of the ruler is a huge garden, which in the steppe was considered an element of luxury, he, leaving, of course, left. In Dzungaria, they remembered Renata for a long time: those masters whom he had taught continued to pour cannons. And by the 40 years of the XVIII century, the Dzungars had 50 guns.

Why did such a powerful nomadic empire disappear from the face of the earth, leaving almost no trace behind? The fact is that civilian war began in Dzungaria, and the famous prince Amursana fled to China, from where he led the Qing troops. Since he was his own, the compatriots did not fight with him, and Dzungaria, which was previously considered invincible, was eventually occupied by the Qing troops.

When Amursana came to his senses, it was already too late. Most of the territory controlled the tsin, and most importantly - part of the Dzungarian nobility went over to the side of the enemy. The uprising raised by Amursana was sunk in blood.

In 1757, the last nomadic empire on the continent ceased to exist - it was completely destroyed by Qing China. The population of Dzungaria was either slaughtered, or died from disease, or fled the country. Question: what does all this have to do with Kazakhstan? Now, for some reason, they overlook the fact that in the 40s of the 18th century, the Kazakhs, pressed from all sides by external enemies, faced an uneasy choice, with whom to go next - with Russia, Ching China or Dzungaria?

How Tsin China behaves, the Kazakhs saw the example of the same Dzungaria: in case of victory, entire tribes were cut in treacherously. In Dzungaria, by that time there was a strong Khan's power, where the level of centralization was significantly higher than in the Kazakh zhuzes. Therefore, the idea of ​​creating a single Dzunggar-Kazakh state seemed the most likely. But Galdan BoshoktuKhan, one of the first rulers of Dzungaria, fighting with the Kazakhs, demanded that they accept Lamaism. Galdan Tseren did not insist on this anymore.

He simply wanted the Djungars and the Kazakhs to unite within one state. The older zhuz even swore allegiance to Dzungaria, and many Kazakh rulers sent their sons there hostage. But this humility was imaginary, in general, the Kazakhs did not obey the Dzungars and, at every opportunity, fought for their freedom. There was too much blood and mutual resentment between them. In short, the prospect of creating a Dzunggar-Kazakh state turned out to be difficult to implement due to the most severe contradictions.

If we turn to modernity, it would be equivalent to reconciling Germany and the USSR quickly and immediately after the Second World War, creating one single state. Therefore, the Kazakhs preferred Russia as a third party in this conflict.

But Kazakhstan, like China and Russia, is in a sense the heirs of Dzungaria. By the end of the 50 of the XVIII century, the Qing empire cut out almost all the Dzungars. That is, in Dzungaria, the Dzungar itself is left. It was divided into three parts. Eastern Turkestan and part of Western Mongolia went to China, Gorny Altai to the Russian Empire, and the Ili, Tarbagatai river basin and the south from Balkhash became Kazakh. In general, it turned out that the Kazakhs won the most from the defeat of Dzungaria - they managed to occupy the most fertile nomads. Interestingly, in Kazakhstan, the Dzungars are still perceived as enemies. This is comparable to the victory of Moscow Rus over the Golden Horde in the battles on the Kulikovo Field and on the Ugra River: the Russians occupied the territories that once belonged to the enemy. And as now the history of the Horde is part of the history of Russia, so the history of Dzungaria is part of the history of Kazakhstan. This, according to Leonid Bobrov, should encourage Kazakhstani scientists to study more closely not only the Dzungar-Kazakh wars, but also the cultural exchange between the Dzungars and the Kazakhs.

Ctrl Enter
Noticed oshЫbku Highlight text and press. Ctrl + Enter
We are
What you didn't want to know about EnglandKazakh secret of survival. Historical lessons
147 comments
Information
Dear reader, to leave comments on the publication, you must to register.