Rosenberg. The ideologist of the Third Reich

January 31 2018
54
The name of this person will never appear on the honorary list of graduates of the Bauman (Moscow State Technical University named after N. Bauman / Moscow Higher Technical School), although it is known to the whole world. At the dawn of his life, he received a quality education in the Russian Empire, and in his maturity he brought colossal evil to his homeland. He not only directed against the country where he was born, the army of invaders, but also hatched plans for its complete destruction and dismemberment. Alfred Rosenberg was the main ideologue of the Nazi party and the author of the plan to develop the "eastern territories", playing a crucial role in unleashing a war of aggression against the Soviet Union.


It is unlikely that the Revel shoemaker Waldemar Wilhelm Rosenberg, a Baltic German in origin, and his wife Elfried Karolina Zire, who came from a family of French Protestant Huguenots who moved to Estland, could assume that their son Alfred, born 12 January 1893, was born, XNUMX, significant role in the world stories.

Today Revel is called Tallinn and is the capital of Estonia, and then, in 1893, it was part of the Russian Empire as the capital of the Estland province. Most of the urban population of Estland were Baltic or Baltic Germans. A lot of Russian statesmen, generals and naval commanders, scientists, engineers, doctors, cultural figures came out of the Ostsee Germans. But there were among them, such as Alfred Rosenberg, who hated Russia and had never identified themselves with it.

Young Alfred was educated at the Revel Petrovsky Real School, and in the autumn of 1910 of the year, in 17 years, he entered the architectural department of the Riga Polytechnic Institute (now Riga Technical University). The shoemaker Woldemar and his Elfriede lived well, since they were able to provide a good education for their future son. When World War I began, Alfred was 21 year. But he did not get into the Russian army or to the front: he transferred to Moscow, to the architectural department of the Moscow Higher Technical School, which he graduated from in 1918 at the age of 25 years. In the same year, 1918, Alfred returned to his native Revel. 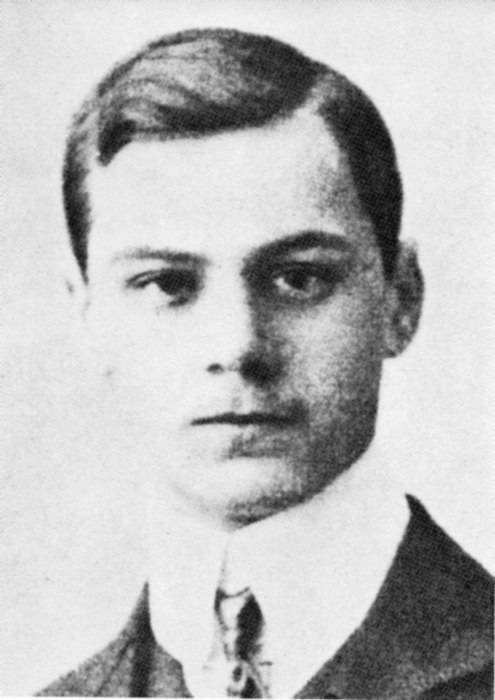 By this time, Estonia was already in the hands of the German troops. The RSFSR, under the terms of the Brest Peace Treaty, abandoned its claims to the Baltic lands, and Germany, in turn, refused to recognize the independence of the Republic of Estonia and established an occupation regime here. In the young Rosenberg, who studied yesterday at a Russian university, they leaped into national feelings. He applied for entry into the German expeditionary corps, but he was not accepted for military service. The command verdict was unequivocal and offensive for the Ostsee German Rosenberg - “Russian!”. The young man had no choice but to get a modest teacher at the Revel male gymnasium (now Gustav Adolf’s Grammar School in Tallinn). However, such work seemed ambitious to a young man, and even in such a hectic time, boring and unpromising. In addition, Rosenberg with extreme hatred for the October Revolution, for Marxist and communist ideas. It was anti-Bolshevism that pushed the young engineer, the architect and the schoolteacher, to more radical nationalist views.

At the end of 1918, Alfred Rosenberg moved to Germany, or rather to Munich. In the Bavarian capital, by this time the “Thule Society” was operating - not the occult, or the political organization that united the German nationalists of a particular kind - the so-called. “Feulkishe” (from Völkische Bewegung - Popular Movement). Members of the Thule Society sought the origins of the Aryan race and sought to justify its superiority over other races. It was a small circle of the Munich intellectuals, who, perhaps, could not imagine, what consequences for humanity in two decades their theoretical and philosophical research will lead.

Alfred Rosenberg got acquainted with 50-year-old Dietrich Eckart, a talented playwright and journalist who played a very important role in the early stages of the development of German Nazism. It was Eckart who introduced Rosenberg in the Tula Society, and soon a young Baltic German met with World War I veteran Adolf Hitler. By the time of his acquaintance, Rosenberg, an educated and erudite man who had closely followed racist and anti-Semitic ideas, was already engaged in journalistic activities. He had a very large ideological influence on Adolf Hitler, contributing to the strengthening of the anti-Semitic views of the latter (before Hitler was very indifferent to the "Jewish question" and even tried to avoid insulting remarks about the Jews). 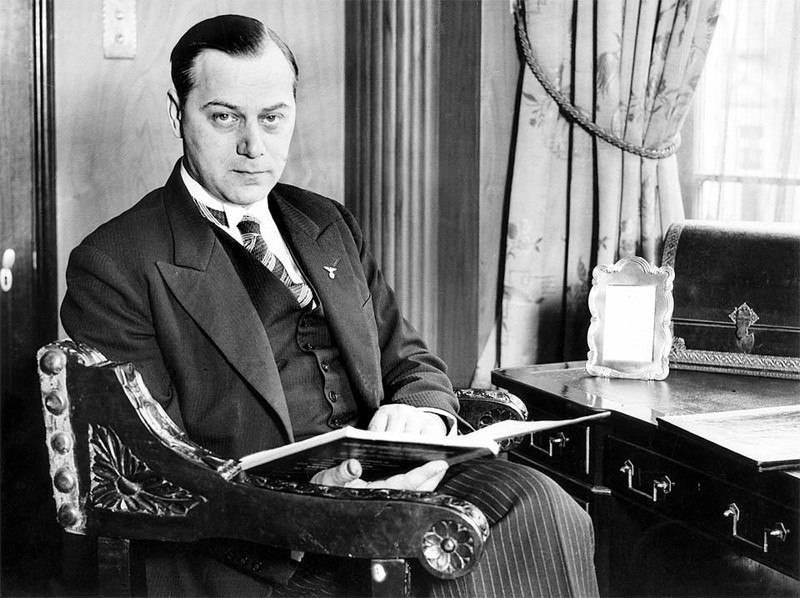 Unlike most of the founders of the “Tule Society” - intellectuals and dreamers, far from the “popular politics”, Alfred Rosenberg was distinguished by his ability to explain racial ideas in a form that was popular and accessible to the masses. He considered all the events taking place in the world from the point of view of racial theory. The October Revolution, of course, which Rosenberg hated, also came. In 1920, Rosenberg joined the National Socialist German Workers' Party and received the party ticket number 625. He quickly became one of the most important figures of the party, actually becoming its main ideologue. In 1921, Rosenberg occupied the post of editor-in-chief of the party newspaper Völkischer Beobachter, and in April 1933 headed the NSDAP Foreign Policy Department. Peru Rosenberg owns a number of books outlining the basics of the Nazi racial theory. The most important work of Rosenberg is the book "Myth of the twentieth century." Already after Hitler came to power, Alfred Rosenberg was appointed ombudsman for the Fuhrer in charge of overseeing the general spiritual and ideological education of the Nazi Party and all related organizations in 1934. Simultaneously with 1940, Rosenberg headed the Central Research Institute for National Socialist Ideology and Upbringing. Another project, which was headed by Rosenberg, was the author's "Reichsleiter Rosenberg Headquarters". It was this structure that undertook during the Second World War the plundering of cultural property from the territories of the occupied countries and their export to Germany.

Since the spring of 1941, Alfred Rosenberg has become one of the key figures in the design of Hitler’s Germany’s plans to attack the Soviet Union. Of course, not being a military leader or a "strongman", Alfred Rosenberg was solely responsible for the ideological and political support of the upcoming "blitzkrieg". 2 April 1941, Hitler commissioned Rosenberg to develop the foundations of Germany’s occupation policy in the east. After a little more than two weeks, on April 20, 1941, Hitler appointed Rosenberg as authorized for a centralized solution of the issues of Eastern Europe. Obviously, the Führer believed that selflessly devoted to the ideas of National Socialism, a Baltic-born Rosenberg, was an ideal figure for leading the occupying administration in the east after the Soviet Union was defeated.

At the same time, there was a very ambiguous attitude towards Rosenberg in the Nazi military and political elite. On the one hand, both the Führer and his entourage recognized Rosenberg’s ideological services for the formation of Nazi ideology, on the other hand they treated him very condescendingly, since Rosenberg’s manager was very mediocre. Playing an important role in the Nazi party from the very first years of its existence, Alfred Rosenberg could not become a truly influential ally of the Führer not in ideological, but in organizational matters - he enjoyed far less influence than Goering, Hess, Himmler, Goebbels, Bormann and some other important leaders of the Third Reich. 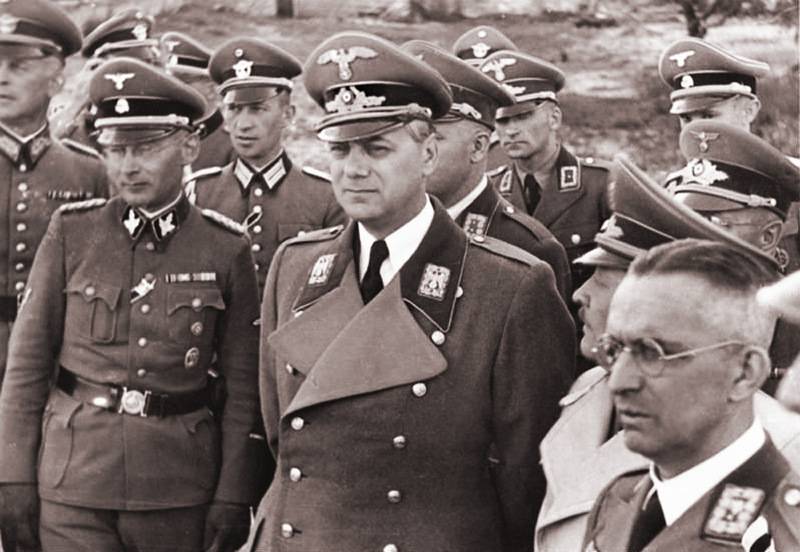 It was to Rosenberg that Hitler entrusted the creation of a special plan for the dismemberment of the Soviet Union. The ideologue of Nazism was convinced that in order to crush the power of the Soviet state, it was necessary to encourage separatist movements in the territory of the Soviet Union, to cultivate Russophobic nationalism among the peoples of various republics of the USSR. 22 June 1941 of the Year Germany and her satellites attacked the Soviet Union. Less than a month after the start of the war, the Imperial Ministry of the occupied Eastern Territories was officially established on July 17. Minister became Alfred Rosenberg. Thus, it was he who headed the activities of all German government bodies in the occupied territories of the Soviet Union - in Ukraine, Belarus, Latvia, Lithuania, Estonia and some regions of the RSFSR. This circumstance makes Rosenberg one of the main Nazi war criminals responsible for the destruction and robbery of the Soviet population in the occupied territories.

The fact that the Nazis worked in the occupied territories of the Soviet Union, it is still impossible to remember without a shudder. The list of Nazi war crimes in Ukraine, Belarus, in the Baltic States, in the North Caucasus is huge. And a huge share of the blame for them lies with Alfred Rosenberg, a man whose bigotry in many ways pushed the Hitler leadership to the atrocities that it had not originally planned. So, it was Rosenberg who initiated the total annihilation of a number of national groups of the Soviet Union (Jews, Gypsies), at the same time he tried to cultivate anti-Russian sentiments in the occupied territories to the maximum - among Ukrainians, Belarusians, Cossacks, Baltic peoples. 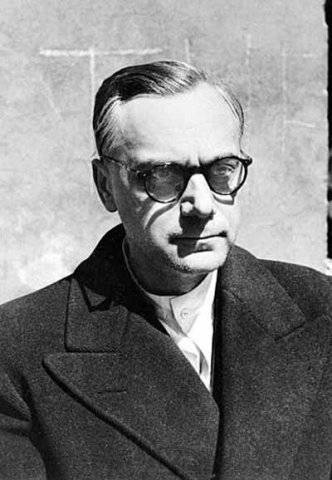 Under the direct guidance of Rosenberg, the export of cultural property from the occupied cities was carried out, and, as we know, quite a few works of art, literature, just historical and cultural values ​​were exported. There are wines of Rosenberg and in the hijacking of Soviet citizens for slave works in Germany and other European countries. It is known that Rosenberg treated the peoples of the Soviet Union as people of the second or even third class. The architect himself was a theoretician by education, who did not fight and did not kill people, Rosenberg expressed the most bloodthirsty and anti-human ideas even in comparison with other Nazi leaders.

However, already in 1944, most of the territory of the Soviet Union was liberated. The officials of the Reichskomissariats were in a hurry evacuated, fleeing from the advancing units of the victorious Red Army. But Rosenberg continued to insist on the expediency of preserving his Ministry of Eastern Territories even when the Nazi armies were ousted from Ukraine, Belarus and the Baltic states. Rosenberg’s desire to preserve the ministry irritated even the closest party comrades, who already constantly laughed at the main Nazi ideologue who was good at talking about defective races, but almost didn’t manage normal administrative work.

Nevertheless, Rosenberg remained Minister for Eastern Affairs until the very last days of the existence of Hitler's Germany. After the victory, he fled to the north of the country, where the government of the official Hitlerite successor, Admiral Karl Doenitz, settled. However, on May 19 1945 at the Flensburg Hospital, Alfred Rosenberg was arrested by soldiers of the British 11 Army. Avoid responsibility for crimes during the bloody war unleashed largely with the direct participation of Rosenberg, he failed. 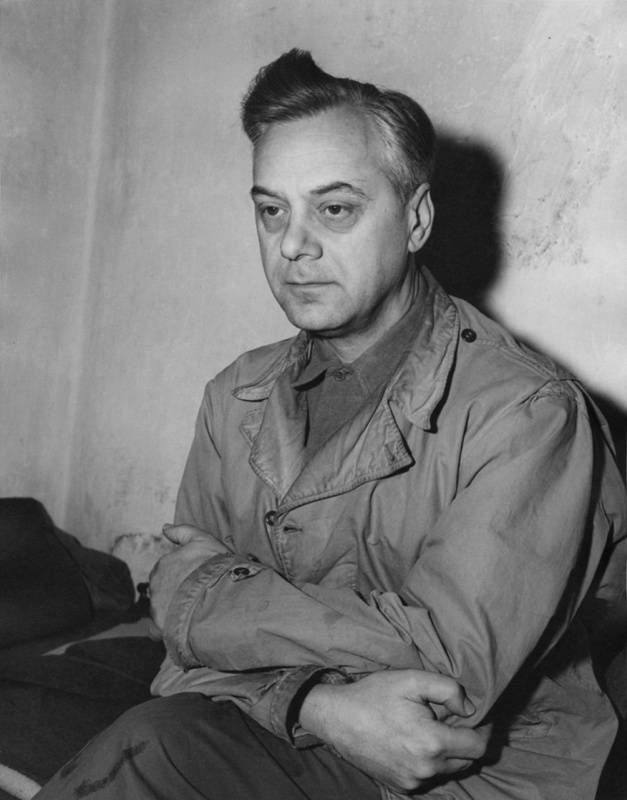 Hitler's ideologue and minister for Eastern territories became one of the main defendants in the famous Nuremberg trials. Unlike many other prominent Nazi leaders who even tried to depict repentance, Alfred Rosenberg did not repent of anything, at least publicly. He refused the last word before execution and ascended the scaffold, never renouncing the beliefs that led to the death of millions of people and cost life and to himself. October 16 1946 of the Year Alfred Rosenberg ended his existence on the gallows in the Nuremberg prison. He was 53 of the year.

Ctrl Enter
Noticed oshЫbku Highlight text and press. Ctrl + Enter
We are
Results of the week. "Well, do not change me because of every idiot!"Yaroslavl Military Financial School - 75 years
54 comments
Information
Dear reader, to leave comments on the publication, you must to register.