Italians presented the first F-35B Lightning II, assembled outside the US

January 29 2018
18
The Italian Navy received the first fighter of a new generation. According to the portal navaltoday.com, at the FACO plant located in the city of Cameri (Novara province), a transfer ceremony was held the fleet the first F-35B Lightning II aircraft.


The fighter with the tail number BL-1 is the first F-35B, assembled outside the United States and the first to enter service with a non-US army. Its assembly was carried out at the factory FACO, which is a joint venture of the Italian company Leonardo and the American Lockheed Martin. 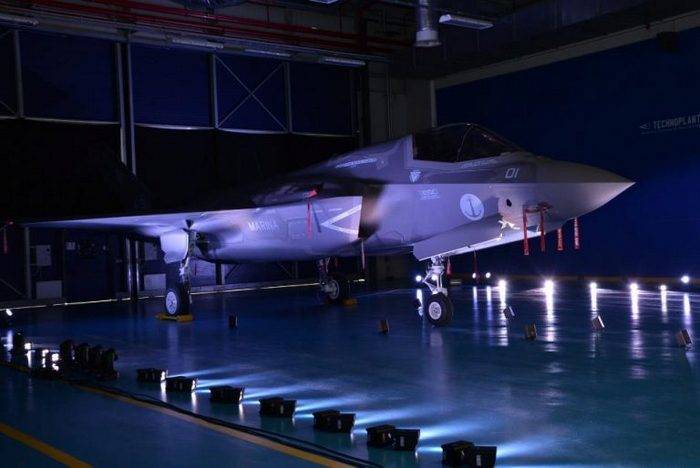 The assembly of the first F-35B, the most sophisticated model in the F-35 family, here at the FACO plant, is testament to the outstanding capabilities of the Italian aerospace industry. FACO continues to act as F-35 European Center of Excellence
- said Doug Wilhelm, vice president of program management for F-35 Corporation Lockheed Martin.

Italian F-35B will be based on the aircraft carrier "Cavour", adopted by the Italian Navy in the 2009 year. Earlier, in 2015, the FACO transferred the first "classic" F-35A fighter to the Italian Air Force.

The F-35A and F-35B aircraft will replace the Panavia Tornado multi-role fighter, the AMX light attack aircraft and the AV-8B Harrier II vertical attack and take-off aircraft. Total Italian Air Force plan to adopt the X-NUMX F-90 (35 F-60A and 35 F-30B) fighter jets of the Italian assembly. In addition, the F-35 will be assembled at the FACO plant for the Netherlands Air Force, as well as the maintenance of the F-35 fighter jets of the US Air Force based in Europe, reports "Warspot".

Ctrl Enter
Noticed oshЫbku Highlight text and press. Ctrl + Enter
We are
The rollout of the first F-35B Lightning-2 fighter took place in ItalyThe Italian Air Force received the first "domestic" F-35A
18 comments
Information
Dear reader, to leave comments on the publication, you must to register.