Dragon in the Arctic. New Silk Road will become polar

January 30 2018
16
The State Council of the People's Republic of China has published a White Paper on the Arctic policy of the state. China does not have its own territory in the Arctic, but Beijing considers itself to be the “interested party” in the affairs of the Arctic. The new Silk Road became “polar”. Analysts say that within the framework of the Chinese initiatives, Russia has a chance to build partnerships in the development of the Northern Sea Route. 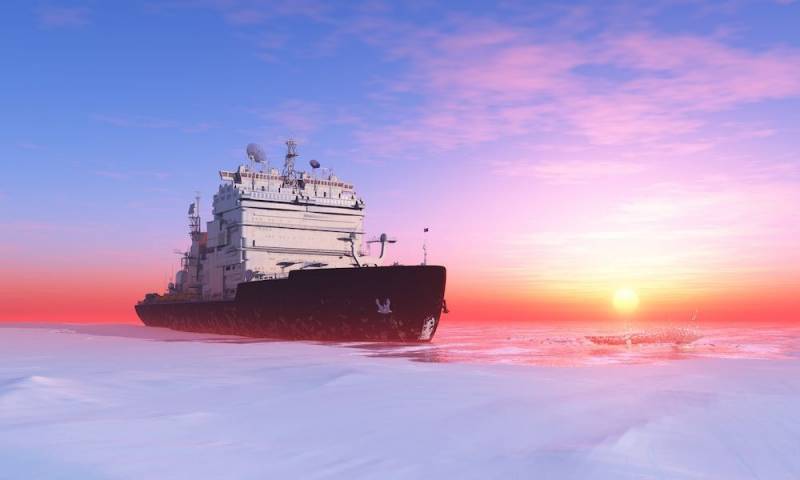 What does a “dragon” need in the Arctic? After all, China does not have its own territory in the Arctic. The answer is simple: China needs trade sea routes. And strengthening through such commercial relations with different countries. China produces a lot and therefore wants to sell a lot. And in order to sell, we need “ways” all over the planet. And the Arctic will not be an exception: after all, routes through it will reduce many traditional ways of cargo delivery.

26 January Beijing quite openly and officially announced the development of the initiative of the Polar Silk Road. We are talking about the creation of maritime trade routes in the Arctic.

Such a loud undertaking can be considered as another economic step in the development of the Middle Kingdom, the outcome of which will be another milestone in the expansion of the “dragon” around the globe.

The message of intention to develop the initiative of the Polar Silk Road came to the Russian media from the press office of the Chinese State Council. The Office informed about the publication of the first White Paper on Chinese policy in the Arctic.

The State Council does not hide the fact that China considers itself an “important stakeholder” in Arctic affairs. The issue with the geography of the "dragon" settled as follows: the State Council noted the "geographical proximity" of China to the areas of the pole.

In addition, it is noted that the Chinese “Polar Silk Road” will become part of the general program “The Belt and the Road”, which includes the projects “Economic Belt of the Silk Road” and “Sea Silk Road of the 21st Century”.

The expansionist strategy of the PRC has every reason. In the framework of the former economic life, the “dragon” has long been close. China's foreign trade is growing rapidly and even beats records. The reason for the change in government financial strategy.

At the end of 2017, China’s foreign trade grew by 14,2%. But during the two previous years, the indicator, on the contrary, showed a downward trend. According to the General Administration of Customs of China, Chinese enterprises saved about 53,08 billion yuan per year due to the reduction of duties or exemption from them. China has revised taxation and cooperates extensively with other countries using free trade agreements. And here's the result: China’s revenues from customs duties for the past year showed a record: 1,89 trillion. yuan (about 300 billion.). how сказал the head of the department of Guangzhou, the volume of collected payments increased compared to 2016 of the year by 23,26%.

Not only the use of the sea routes, but also the exploitation of the natural resources of the Arctic can seriously affect China’s economic development. The Northern Sea Route will allow the "dragon" to quickly deliver goods to Europe. Now the road from the ports of the PRC to Rotterdam via the Suez Canal takes 48 days. And here is another example: the Arctic tanker Christophe de Margerie arrived from Norway to South Korea (without an icebreaker) and spent just a dozen days on the way. The difference is more than tripled!

The Chinese are not idle. As notes Finmarket, among the Chinese cargo ships, the Northern Sea Route (Northeast Passage) in 2013 was first mastered the first Yong Sheng. In the summer of last year, 6 of the Chinese ships passed the same route.

In addition, in September 2017, the research vessel Xue Long flew along the Northwest Passage along the northern coast of Canada: the journey time from New York to Shanghai was thus reduced by 7 days compared to the traditional route (via the Panama Canal) .

Finally, China is one of the thirteen observer states under the Arctic Council. “Dragon” today is actively involved in addressing global and regional issues related to the Arctic: from climate change to exploration and exploitation of natural resources.

In accordance with the new White Book, “dragon” enjoys freedom and rights to navigation, fisheries, scientific research, overflight, cable laying under water and pipelines, to explore and extract natural resources in the international seabed areas and special marine areas and the Arctic the ocean. This right is enshrined in international treaties and the United Nations Convention on the Law of the Sea.

For such a vague formulation is the specific interest of China: to take, if not the leading, then the leading economic positions in the Arctic region. The Chinese are assertive, enterprising and able to profit from everywhere, and therefore, of course, they will achieve their goal.

“China needs to look for new ways to develop its economy, to explore new horizons,” says Reedus Amarkets lead analyst Artem Deev. - The Celestial always has big ambitions. Probably, the Chinese intend to take a leading position in this region, although they do not have direct access to the Arctic and are unlikely to get what they want in full. Maybe Russia will support China’s aspiration, but the Scandinavian countries and America will probably not be happy with the emergence of such a major player in the region. ”

“China cannot encroach on the shelf in any way,” the expert adds, “but it may encroach on the international section of Arctic transport communications: the Northern Sea Route, the South-Western Passage, some new ones, perhaps, routes will appear. If the ice melts further, there are many different options. ” At the same time, the Arctic “way” will become a very costly project for the Chinese, the expert believes. But there is an option: the “path” will be beneficial for the “dragon” if on its territory the strongholds are provided by the “bear” - Russia. “The Arctic for navigation is a very difficult region, but, taking into account the projects that China is implementing, it is likely that this project has a chance of success,” says Deev.

As a result, we note that China and Russia have another reason for what various experts now call “partnership relations”. This time the partnership will develop around the Northern Sea Route. There is every reason for this project: Moscow itself set its sights on this route in order to supply the Chinese with what the bear economy is strong about: energy resources.

However, Moscow is now bad with money: oil in the world is not sufficiently expensive, or there is a hole in the budget, or Western sanctions are in the way. So, the calculation will be on Chinese investment in the development of the Arctic region. Experts confirm this point. “A number of experts believe that this is a promising topic: joint development of the Arctic using Chinese investment resources. They have their own experience in the construction of icebreakers and special equipment. Others believe that this is a very difficult topic and should not be much integrated with the Chinese in the exploration of the Arctic. But the process is still going quietly, ”says Nikolai Kotlyarov, head of the Russian-Chinese Center for Financial Academy under the Russian government. However, China’s “bypass Russia” will not work: it’s probably only about joint development of routes, that is, on mutually beneficial terms. What can be these conditions is not yet clear.

Observed and commented on Oleg Chuvakin
- especially for topwar.ru
Ctrl Enter
Noticed oshЫbku Highlight text and press. Ctrl + Enter
We are
Results of the week. "God forbid to see Russian revolt, senseless and merciless!"Chinese cargo on the Northern Sea Route
16 comments
Information
Dear reader, to leave comments on the publication, you must to register.