January 29 2018
155
Revival, but not that. Stagnation has come to Russia. That ruler that sits at the very top reminds General Secretary Brezhnev. In the West, the epithet “eternal” is already being used in relation to Putin. But Putin still has 6 years ahead! After Secretary General Brezhnev, the USSR quickly slipped into restructuring, followed by an economic and political collapse of the system. What nightmares are waiting for Russia after Putin? The answer is known: Putin will go for a fifth term. 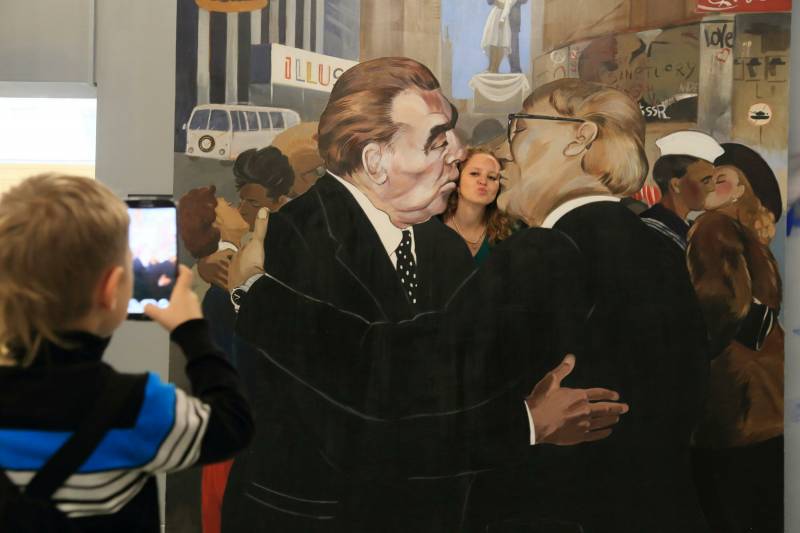 Andreas Rüesch talks about this in a large Swiss newspaper. "Neue Zürcher Zeitung".

Putin "led his country into a dead end," says Ruche.

The Russian president stubbornly rules the country and already looks like Brezhnev, the eternal Soviet leader, the journalist said. But this is not enough for him: he wants another six years to remain in power! But only Putin “is not in a position to offer a way out of the impasse in which he himself led his own country,” the commentator points out.

In the meantime, the Russian elite is nervous - and nervous more and more. The day “X” is approaching, and many Russian oligarchs (“Oligarchen”) are afraid of this day. And not only they: the Kremlin, as the author believes, also has a “headache”.

It is, reminds the author of the article, not about the presidential elections, which will be held in Russia in March, but about the date of January 29. On this day, the US government is obliged to announce new sanctions under the previously adopted law.

Punitive measures of the United States are directed, on the one hand, to businessmen who have connections “with the Russian security apparatus,” and on the other hand, Washington wants to publish a black list of “oligarchs” and their relatives, who will come under pressure from sanctions later.

It seems that the message is very clear: anyone who is related to the “Russian ruling elite” and receives benefits “from the Kremlin’s corruption system” will be punished. All these figures are waiting for "international ostracism", ironically Ruche. The American law, in his opinion, is aimed at a flaw in the Russian system, a well-known contradiction: the authorities in Moscow “scold the West for anger and immorality,” and “secretly transfer their money to tax havens, send their children to Western schools and the pleasures of the convenience of American cities. " This "beautiful double life of the Kremlin magnates" is now likely to be "endangered." The clock is ticking!

As for Putin’s re-election, it is, the Swiss author laughs, “has already been completed.” The ruling class, even if it is divided into rival camps, does not see an alternative to Putin.

Putin’s greatest opponent is not at all one of the opposition candidates, but “apathy in the country”, which can lead to a horribly low electoral turnout. The journalist also points to the “fact of election fraud by the Putin regime”: after all, “with the help of a judicial farce”, the candidate of the democratic opposition Aleksey Navalny was excluded from the race. This is “the Kremlin’s incredible paranoia”: despite its “huge propaganda apparatus”, the Kremlin is afraid to take a chance and allow the anti-corruption activist Navalny to the polls.

The new Putin term will be the last (in accordance with the Constitution of the Russian Federation). And no one can say what will happen next. It is known that in his stories Russia suffered a lot of bloody coup d'etat and “does not have the tradition of a peaceful transfer of power from one elected head of state to another,” the columnist reminds. Even if it turns out that Putin, like Yeltsin, will impose on the people the “continuity of the regime”, a struggle for power will inevitably begin in the ranks of the “many losers”. And this is what makes the Kremlin nervous.

The fact that the clock is ticking, undoubtedly, Putin himself knows, continues the Swiss author. He, who once called himself a “slave to galleys,” has ruled the state for 18 for years, if we take into account those 4 of the year (from 2008 to 2012) when he “gave” the presidency to Dmitry Medvedev and sat in the chair of the prime minister.

Putin is already in power longer than the rules of the USSR, General Secretary Leonid Brezhnev. Brezhnev, the older generation of Russian people know as a ruler, symbolizing the "golden era of stability." But at the same time, the name of the Secretary General is identified with "stagnation and a fatal inability to reform." 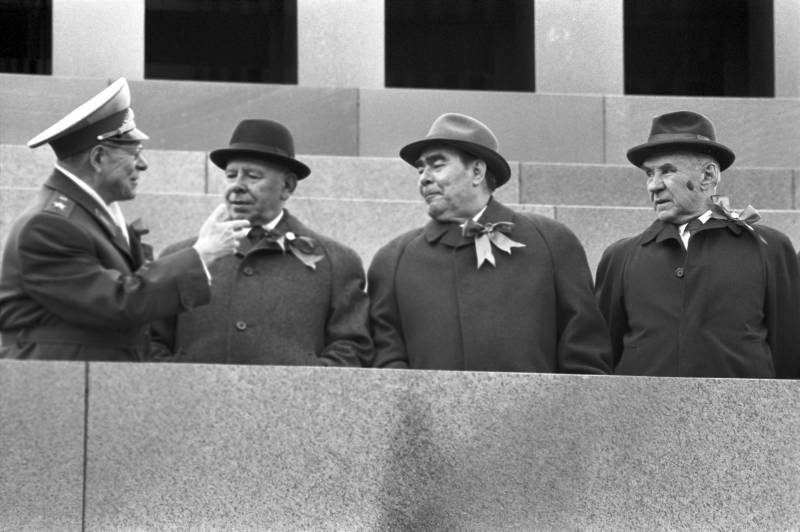 At first glance, the Swiss commentator notes, “consensus politician Brezhnev and Putin’s tough tactics” have little in common. The Soviet leader, who died "right on the post" in 1982, was a wreck and served as an object for countless anecdotes. But 65-year-old Putin seems to be fine in this sense. True, his "kingdom" also decayed. Russia's fat years are over, the economy is lame in both legs. By 2008, Putin managed to achieve an impressive average growth rate of seven percent, but since then Russia has already experienced two recessions and lagged behind other countries with developing economies. Politically explosive is above all the increase in poverty in the country. Real incomes have fallen markedly since 2014. The economic problems are based on “structural deficiencies”.

And what does the “regime” do? Never mind. The regime compensates for this with “shrill ultranationalism”, with statements about the desire to “revive the great Russian state.” The Kremlin is simply reeling: Kremlin propaganda depicts Russia, surrounded by enemies, and the West, which is in a state of "decline." Along with this, propaganda shows “Ukrainian Fascism” and “Cancer of Islam”.

An explosive mixture, but Putin managed to play well here. The annexation of Crimea gave it almost the status of a “national savior”, and the successes of military intervention in Syria and the creation of an anti-Western alliance with Turkey, along with “exciting hacker attacks in the US”, seem to have convinced the public that Russia has once again taken the path of a great power.

But just the Brezhnev period of stagnation should serve as a warning to Putin, the commentator believes. The Soviet Union under Brezhnev overloaded the economy with excessive military spending. Putin does the same. Expenditures on health care and education are being reduced “for the sake of re-equipment”.

The support of Putin, who is now “above criticism,” easily hides the fact that “the reputation of his corrupt government team has plummeted.”

“The paralyzing fear of change” - this is how the Swiss sees the political situation in Russia. Putin may be the ruler who will come to power again (“indisputably”), but it was he who led his country “into an economic and political dead end.” And the period before 2024 will pass for the Russians "under a bad sign."

Economic stagnation is likely to continue, especially since Putin avoids reforms and proposes the electorate only a “continuation” of the previous course. The continuity dilemma will sharpen: without renewal, the Kremlin regime cannot cope with a balance of internal rival forces.

The open elections in Russia are “out of the question”: after all, “the entire Kremlin leadership is afraid of criminal prosecution and fear of losing accumulated wealth during a regime change,” writes Ruche.

The author further hints that the Russian elite in 2024 will put the question: why change anything at all? Why not sit Putin for the next six years? The script is quite realistic, the author believes. The constitutional amendment on the abolition of the deadline “is not a serious obstacle,” ironically Ruche. In the 2030 year, at the end of the supposed fifth term, Putin would have been just 77 years old, and he would have been in power longer than Stalin or Tsar Nicholas II.

Other Western commentators still anticipate the "spring" in Russia. If not in Moscow, then at least in the provinces.

For example, Leonid Ragozin (Leonid Ragozin) writes about the “spring” in the regions of Russia, whose article was published in «Bloomberg».

Despite the fact that the oppositionist A. Navalny was blacklisted by the state television channels of the Russian Federation and was not allowed to take part in the elections, he is not sitting idly. The author recalls the planned "demonstrations against injustice", which will be held under the sign of the March elections. Navalny’s goal is to deprive popular support of the so-called inevitable victory of Putin. The organization of Navalny has already 84 regional offices, and in the coming weeks, it will appeal to the people not to go to the polling stations on March 9th.

The task of the protests is obvious. Today, the Russian economy is on the verge of stagnation, Western sanctions are acting against the state, in addition, Moscow is participating in the war in Syria. And the liberal opposition, which previously existed only in the major cities of the country, is now spreading its influence to relatively small cities and towns. And let the current President Putin still be entitled to a deadline, supporters of Navalny are counting on what they call the Russian spring.

It’s hardly likely that supporters of Navalny will be able to influence the outcome of the elections. Opinion polls conducted by various foundations confirm it all as one: Putin’s rating is still high. Not 86, so 80%. You can blame such a high result on propaganda, but the fact remains: Putin’s re-election, in which Swiss Ruche is in no doubt, will take place. It will take place, despite the gradual increase in the number of people who do not trust Putin and prefer stagnant change.

It should also be noted that the issue of change in Russia is extremely difficult, because its decision does not mean the onset of the very bright future, which politicians asserted during the days of Secretary General Brezhnev. Please: change brought the country Gorbachev and then Yeltsin. “We want change,” sang in one famous song. But the change of these Soviet Union collapsed.

Ctrl Enter
Noticed oshЫbku Highlight text and press. Ctrl + Enter
We are
Results of the week. And what about the “Putin regime”?Project "ZZ". Russia needs Stalin. The Kremlin is building an "ideological foundation"
155 comments
Information
Dear reader, to leave comments on the publication, you must to register.