January 29 2018
19
Since January of this year, Poland has taken its place among the non-permanent members of the UN Security Council, replacing the neighboring Ukraine here. The new status gives Warsaw the right not only to take part in resolving acute international problems, but also to initiate the discussion of issues relevant to its national interests. What the Poles immediately took advantage of. 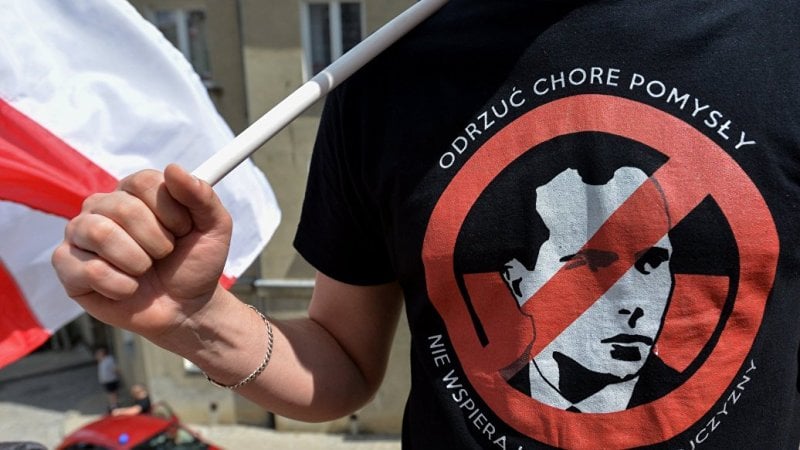 Nationalism walks on both sides of the border

Already in mid-January, Poland registered a draft resolution of the UN Security Council on the recognition of acts of genocide of violent actions of Ukrainian nationalists against ethnic Poles during the Second World War. Moreover, the document reflects “serious concern about the fact that the Ukrainian government supports nationalists who carried out ethnic cleansing.”

Such resolutions usually have an exclusively propaganda function, which aims to achieve international support in condemning one or another phenomenon. The document proposed by the Poles may become a resolution of practical application. Through the UN Security Council, referring to the provisions of Chapter 7 of the UN Charter, Warsaw wants to ban such organizations of Ukrainian nationalists as the OUN, UNA-UNSO, C-14, SNA, the Bandera and ONS All-Ukrainian Organization.

Let us note, by the way, these nationalist formations of Ukraine have long been banned in Russia, but Western democracies still show tolerance towards them, as, incidentally, to other destructive actions of the current Kiev authorities, which in many respects rely today on nationalistic forces and glorify their doubtful heroes.

There is no need to go far for examples. Last Monday, President Petro Poroshenko, speaking on the occasion of Ukraine’s Unity Day, urged Ukrainians to teach history and make the right conclusions. As an auxiliary material for this study, Poroshenko suggested propaganda delights of the nationalists Simon Petliura and Nestor Makhno.

In his speech, the President of Ukraine remembered the Polish nationalist Pavel Skoropadsky, whose book “Memoirs” was recommended for reading “to all politicians, officials, deputies”. This seemingly harmless council was an obvious injection to Warsaw for its initiative in the UN Security Council.

After all, whatever one may say, in Poland itself the power was also saddled by nationalists - the heirs of the militants from the Army of Kraevoy. (It is enough to look at the family history of the current leader of the ruling Poland party Law and Justice, Jarosław Kaczynski.) During the war years, this Army was marked, among other things, by bloody actions against the Polish resistance movement Guards Ludovoy, as well as the local Ukrainian and Belarusian population.

Today, the heirs of those Polish nationalists hold marches, demonstrating their unity to the country and the world. I remember this action in the city of Przemysl. It was called “March of the Peremyshl and Lviv marches”. "Eaglets" called Polish participants of the Polish-Ukrainian war for Galicia. It was almost a century ago.

Now a new generation of “eagles” is walking in anti-Ukrainian marches. In Przemysl, these people were shouting "Death to the Ukrainians!" The local government reacted with approval both to the march itself and to its militant slogans. No wonder the Kiev authorities then banned the entry to Ukraine Mayor of Przemysl.

Such mutual bans arose more than once. They were accompanied by demarches of high officials. The most notable of these was the refusal of the Polish Foreign Minister, Witold Vashchikovsky, to visit the National Museum-Memorial of the Victims of the Occupation Regimes “Prison on Lontsky” during his visit to Lviv. Vashchikovsky then formulated "the main problem of the Polish-Ukrainian relations - the construction of the Ukrainian state on the ideals of Bandera."

There are problems in Poland itself. Recently, by order of the prosecutor's office, leaders of the public organization Pride and Modernity were detained here. In a statement to the media, the press secretary of the Prosecutor General's Office, Ewa Bialik, noted that they "were charged with, in particular, the propaganda of the Nazi regime."

One of them was seized weapon and ammunition. In the detainees' apartments, they also found “objects, in particular, uniforms and other things that contain materials that promote the Nazi structure of the state”. The Polish press has written more than once about the organization Pride and Modernity. The first publications appeared last spring.
Then the journalists visited incognito at the local Nazi event dedicated to the celebration of Hitler's birthday. Now TVN has published a report on this story, after which the detentions described above followed. It should be noted that this happened only after Poland in the UN Security Council condemned the glorification of Nazism in Ukraine.

At the end of the week, the Polish Diet added pepper to the topic. On Friday, the lower house of the Polish parliament passed amendments to the law on the Institute of National Remembrance of Poland. For the denial of crimes of Ukrainian nationalists during the Second World War, punishment was imposed in the form of imprisonment for up to three years.

This rule applies to both Polish citizens and foreigners (read: Ukrainians), who have been banned by the law for propaganda of Bandera in Poland. Commenting on the decisions of the Seimas, the Polish Foreign Ministry confirmed its previous plans to build a strategic partnership with Ukraine, but stressed that this partnership "must be based on truth."

Meanwhile, the main Polish opposition in the face of representatives of the Civic Platform party criticizes both the decision of the Sejm and the initiative of the Foreign Ministry in the UN Security Council. According to them, the goal of these actions is “to hit the Ukrainians even harder”. This position is remarkable in that the Civic Platform expresses the interests of pro-European politicians in Poland, and one of its leaders (Donald Tusk) today heads the European Council.

Europe, as we know, is quite tolerant of the manifestation of nationalism in Ukraine, the activities of those organizations, the ban of which Polish diplomacy decided to achieve. It is explained simply. The current government in Kiev relies on nationalist forces and without this support it simply cannot stand.

Europe has invested heavily in the Kiev regime (according to various estimates, Kiev received from five to seven billion euros from the EU after Maidan), but has not yet received the expected dividends. Therefore, the nationalists in Ukraine are quietly tolerating rampant and even forgot about “human rights and other European values” in this country.

Poland is another matter. Its ambitions are clearly defined in several geopolitical projects at once, the meaning of which comes down to Warsaw trying on the role of the center of power in Eastern Europe. The center is fairly independent of Brussels, which forms its political agenda on a large part of the continent.

It is almost impossible to do this without subordination to the will of the neighboring countries. Ukraine has a special place here. Unlike other countries in the region, it is geographically larger than Poland and potentially richer. This piece is easy to choke. Warsaw decided that it was possible to outplay Ukraine only on the ideological field.

The opposition "Civil Force" sees all this from within Poland quite well. Therefore, one can trust its assessment that the new initiatives of the Polish authorities serve not so much the assertion of historical truth in relations between the two countries, but rather self-elevation over the Ukrainians in achieving geopolitical preferences.

It seems that it was felt in the high UN offices. The diplomatic attack of Poland so far has bogged down in the snares of the local bureaucracy. For two weeks, the Polish initiative has not advanced further than the registration of the resolution - outwardly relevant and objectively necessary. In fact, experts see this document as an attempt to change the balance of power between the nationalists of the two countries.

It is unlikely that the world will arrange such a half measure. After all, Nazism is an infection, which requires not selective condemnation and prohibition, but universal polls. Not everyone is ready for this yet ...

Ctrl Enter
Noticed oshЫbku Highlight text and press. Ctrl + Enter
We are
Results of the week. "Everything! Kina will not be! Electricity is over! ”Reports from the militia of New Russia for 27-28 September 2014 of the year
19 comments
Information
Dear reader, to leave comments on the publication, you must to register.