As 10 troops from Sweden and Switzerland, two Koreas "restrain"

January 29 2018
8
In the 2018 year (July 27), Korea will “celebrate” the 65 anniversary of the division into the northern and southern parts. Between a single people laid the wall both directly and in figurative sense of the word. The term “38” parallel in this case became in fact the nominal meaning of contention, on the one hand being the demilitarized part of the border of the DPRK and the Republic of Korea, on the other hand, showing one of the most intense troops and border lines technology in the world.


In the summer of 53, on this very line, having a length of 250 km and a width of approximately 4 km, the United Nations decided to create, if I may say so, neutral forces of a kind of border control. Very little time passed since the end of World War II, and therefore they didn’t try to find neutrals for a long time - they took advantage of the “services” of those who had a neutral status in WWII. This is about Switzerland, an example of its neutrality (including its banking structures) during the most bloody war years in stories humanity once again confirms the saying that for whom - the war, and for whom ...

So, the UN decided that it is difficult to find anyone better than the Swiss military to monitor the border situation between the North and the South on the Korean Peninsula. But they decided not to leave the Swiss alone and added to them other European “neutrals” of the Second World War - the Swedes. And this mixed military contingent has been “monitoring” what has been happening in the demilitarized zone (DMZ) for almost 65 years, every time shuddering when it comes from Pyongyang, then from Washington there are claims that the time has come to show “Kuzkinu mother”.

Startled so that sunk to Bern and Stockholm, when a few days ago the so-called Doomsday clock was decided to be transferred by Western surveyors to 23: 58 - “two minutes before the start of nuclear war” - the Swiss and Swedish observers of 38 parallelism, as they say in diplomatic circles, they are seriously concerned. Very seriously...

What is this unique unit, which, for all the seriousness of the confrontation, looks like a funny detachment (it is very difficult to call it a regiment)? We are talking about a narrow group of military personnel of the above-mentioned European states, one of which (Sweden), NATO wants to draw into its ranks. The group is really "narrow." To date, the demilitarized zone of the Korean Peninsula rather strange functions are performed only by 10 troops from the Swiss and Swedish armies. 10 people who can not be called either peacekeepers or representatives of the armed forces (the zone is demilitarized). Rather, it is the separation of highly paid military personnel, which demonstrates only one thing - how 65 years ago the United Nations was an international body in which even major military conflicts could be negotiated and stopped. In today's UN, with its frank inability to resolve a single serious issue (if serious issues do not include funding for the UN itself), the largest international diplomatic institute that was originally conceived by the creators is hard to guess. But that's another story.

Who is in the contingent of neutrals on the 38 th parallel? The Swiss press reports that there are people for whom the Korean business trip is not the first foreign and not the first “dangerous” one. Commander of the five Swiss soldiers Colonel of the National Armed Forces of Zurich Beat Klingelfuss. 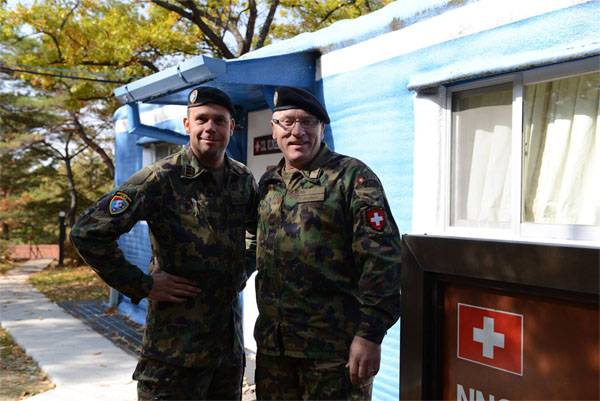 Change of UN Commander in DMZ in 2015

Klingelfuss has participated in the UN missions in Afghanistan, Lebanon, Bosnia and Herzegovina, as well as in the hearth of the Indo-Pakistani confrontation in Kashmir. The colonel, who has been on a Korean business trip for about 2 years, notes that "only outwardly service in the demilitarized zone on the Korean Peninsula looks calm." According to Klingelfuss, “the most important mission is actually to ensure independent and impartial monitoring in a divided territory.” The representative of the Swiss armed forces, a group of representatives of neutral states on the border of the two Koreas - "the eyes and ears of the international community."

What do these eyes and ears do? - Understandably: they look and listen ... Then the data on the situation for a certain period of time (usually two weeks, in case of an increase in tension, more often) is transferred from the DMZ to the United Nations international commission responsible for adhering to the cease-fire.

In the Swiss information sources it is reported that the “missionaries” live in specialized barracks, painted in blue paint and more like a mini-hotel with a considerable number of stars. The similarity with the expensive hotel adds the presence of the piano (according to other data, the piano) in the general (I almost said - “Lenin's” ...) room. The extent to which the UN costs the content of this amusing squad with special preferences in classical music is not reported. But just by the published menu, one can conclude that “ensuring monitoring of the cease-fire regime” on the 38 parallel is a very expensive thing. The United Nations, in order not to lose face - after all, a whole “nuclear war” now has to be “restrained”, cannot afford to let the soldiers of the neutral corps feed on soldier porridge. From the menu, one is the name of individual dishes in which it is clear that the Korean contingents, who are Swedes and Swiss “monitor” with a lot of their direct participation, have a copious salivation of the Korean contingents:
salmon soup (or pea soup with meat), jerked dry meat (jamon), raclette (a national Swiss dish prepared in the image and likeness of another dish - fondue - from special varieties of cheese), an abundance of fruits and vegetables, juices, several kinds of seafood.

In the free from the "vigilant monitoring" time, the Swedish-Swiss contingent from 10 can correct the physical form (after jamon and raclet) in the gym with modern simulators.

From the statement of Colonel Klingelfuss (quoted from SwissInfo):
For all this time, we and our Swedish colleagues have become one big family (hopefully, not a “Swedish,” author’s note). We have a lot in common, and, for example, we celebrate Christmas together.

As it turns out, the Swiss-Swedish contingent spends not so much time directly at the DMZ (even with a royal table and practically not barracks, and a hotel accommodation option with music playing) as much as it was possible to assume initially. So, five Swiss soldiers, four nights a week (plus most weekends) spend on the territory american military base near Seoul. Neutrals are the same ... Their family members can live there for any time.

Representatives of the UN contingent constantly explain their reluctance to remain in the DMZ by the fact that “noise interferes there”. We are talking about broadcasting flows, which one Korea periodically sends to the other, trying to prove itself to be propaganda, then specifically psychological. From the DPRK side, bravura marches and speeches about the greatness of the whole family of Kim rulers, from South Korea, the answer is in the form of pop or statements from the series how Koreans live well in the South and how “awful” to live in the communist North.

The senior lieutenant of the Swiss army, Jannis Loher, declares that initially “this noise affects the psyche and enrages insanely, but with time you can get used to it”. The Swiss say that during the months of their stay in the demilitarized zone, they learned the entire Korean propaganda (on both sides) repertoire. 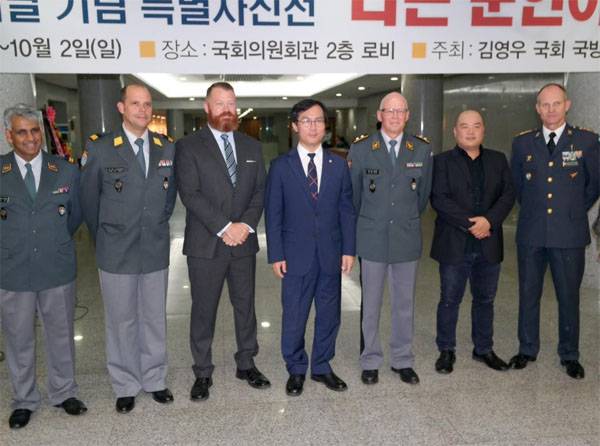 History is silent about who is monitoring the situation, while the UN contingent is having fun on the territory of the American base.

When the journalists asked the representatives of the contingent about the ultimate goal of his stay on the border of a divided state, the answer was: Be present when signing a peace treaty.

But if you consider that a few dozen kilometers from the border is one of the largest US military bases in the region, then
Signing a peace treaty between Seoul and Pyongyang can be waited for the next 65 years ... And wait - the UN has not yet canceled the financing of the UN of this amusing mission.

Ctrl Enter
Noticed oshЫbku Highlight text and press. Ctrl + Enter
We are
Strangulation: the context, conduct and consequences of the American naval blockade of ChinaIs the Korean Peninsula on the brink of war?
8 comments
Information
Dear reader, to leave comments on the publication, you must to register.