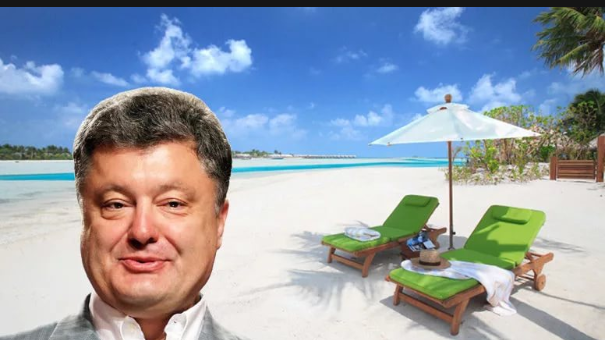 The first week of January, President Poroshenko and his family spent in the Maldives. Ukrainian people are delighted with this.

Open letter to the soldiers of the ATO

“We, fighters of the ATO, are writing this letter in a damp dwelling under shelling of the enemy. Sand is poured from the ceiling, the ground is shaking, and each projectile flying toward us can be fatal for us.

In the morning, the commander said that our president, who is also the Commander-in-Chief, recently spent 8 days of rest in the Maldives. This news filled us with joy and pride for our Peter Alekseevich. We are well aware of the severity of his shoulders. Of course, he needs rest.

We hope that Pyotr Alekseevich, having spent 8 days for eating 18.6388 dollars, regained his strength. Diving for 18,705 dollars undoubtedly helped to strengthen his shaky nervous system.
The total amount of 500,000 dollars spent by our president on vacation, we consider as a donation to improve our country's defense.

Peter Alekseevich!
We appeal to you with a request: send us your photos taken in the Maldives! We will decorate the walls of our dugout with them and each time, going into battle, we will look at them, so as not to forget who and what we are going to die for.
With war greetings, N-unit fighters.

PS Pyotr Alekseevich, we also ask you very much: send us 1 (one) box of stew and 1 (one) box of condensed milk, as well as warm blankets, how many are not sorry - we are very cold and have nothing to eat.

PPS We heard that the Russians have missiles that can fly to God knows where. So, the exact coordinates of the hotel Cheval Blanc (Cheval Blanc), in which P. Poroshenko likes to rest, 5,337 N. and 73,18 i.d. Look, do not miss! ”

- Well? “Poroshenko looked at Geletey in front of him in disgust,” there are still letters from peasants, factory workers, and students. Everyone expresses their "delight." What do you have to tear off?
The colonel-general was silent and very wet, especially in the armpit and perineum areas.
The President looked at the head of the State Guard Department:
“You can't trust anyone, freaks.”
Then he crumpled the letter in his hand and shouted:
- Why do state information of the highest degree of secrecy become known to the last swineherd in the country ?! How was this possible ?! Who?! Who is disheveled ?!
“Your vysokovazhnist,” the head of the State Guard Department began, “Radio Liberty was the first to announce the information ...”
- Did they know where from ?! - he hit his fist on the table Poroshenko, - how did they know your mother ?! Where from ?!
- Your eminence, the organization of your rest was entrusted to the most qualified specialists of our department: lieutenants Zaderikhvist and Durnolap, captains Ekalo and Drigailo. Directly the operation was led by Major Skachkistribaylo. All true patriots, heroes of the ATO ...
- All to introduce all to the awards. Posthumously.
The general jerked the Adam's apple:
- We will do, Your Excellency.
Poroshenko continued to look at the general:
- and everything?
After waiting a few seconds, Poroshenko pressed the button, entered the secretary.
- Star of Hero of Ukraine, a decanter of vodka and executioner. Vodka to me, everything else to him.
The secretary went out.
Poroshenko turned the hourglass on the table:
- In 5 minutes you will become the Hero of Ukraine, and posthumously or ... or whatever, you decide. Think fast.
- Your Majesty, I propose to spread the message that so-called. “President’s vacation in the Maldives” was part of a secret operation to rescue the president from an assassination attempt. I will take care of the development of the operation and its implementation personally.
The door opened, the secretary entered. On the tray was a decanter covered with a glass, lay "Gold Zirka" and an ax.
- Where is the performer?
Tears appeared in the eyes of the secretary:
- Pyotr Alekseevich, dear father, for your sake ... - the secretary threw a carnivorous glance in the direction of Geletei, - let me, myself!
“Look, as it is in a hurry,” Pyotr Alekseevich thought approvingly, “saliva dripping from the fangs”.
But he said aloud:
- It's too early for you. On cats, first practice. Leave the vodka, take the rest.
The secretary left, obviously not hiding his disappointment.
Poroshenko slowly poured a glass of clear liquid into a glass and knocked it into his throat, closed his eyes. His eyes were kinder:
- That's the only way with you, bastards, and it is necessary. Go to work. And remember my secretary.

Official report of the State Security of Ukraine

“The media that was recently bought off by the enemy began to spread information about the recent trip of our president outside the country. At the same time, the fact was interpreted in the most negative way, discrediting the head of state. Officially declare that this information does not fully correspond to reality.

The Office is authorized to report that, over the course of many months of development, a wide-ranging network of the enemy was opened, aiming at an attempt on the life of the president.

From 1 to 8 in January, the Office carried out an operation to eliminate the exposed underground organization. In order to ensure the safety of the president and his family members, all of them were secretly taken out of reach of terrorists during the operation.

During the forced rest, the president, however, did not for a moment let go of the reins of the state, and moreover, he passed the training course of a submariner-saboteur.

Currently, the terrorist network of enemies completely eliminated. The arrested are already giving confessions about working for the Kremlin’s special services. During the operation, lieutenants Zaderihvist and Durnolap, captains Jekalo, Drigailo and Major Skachristibaylo, died a heroic death. Eternal memory to the heroes! ”

The fatal greed of the president

And the Geletey Gold Star did not receive. When he tried to hint to the president about his promise, he silently showed him a fig. “Okay,” the general thought vengefully, “your stingyness will get you sideways.”

Locking himself in his office, he took out his phone and pressed a few keys:
- Hi it's me. Need to meet. Time and place - as usual. The conditions are the same.
“Okay,” said the Radio Liberty correspondent, hung up and rather stretched out in his chair: another information bomb loomed on the horizon.