First impressions of the speech of Donald Trump in Davos

January 29 2018
33
Ended another economic forum in Davos. The world watched with interest the speeches of leaders of countries, leading politicians and economists, businessmen. It so happened that it was in Davos that many of the events planned for the near future were first voiced. 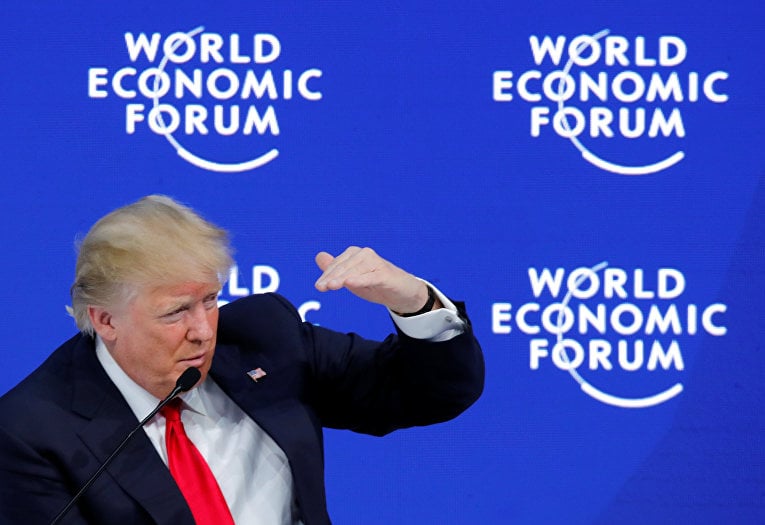 Talking about the results of the forum is quite problematic for me. Like most readers, at the event itself was not. On the sidelines did not communicate. And I am not a specialist in economics. But I wanted to listen and analyze the performance of one person. It is clear that this person is the president of the United States Donald Trump. Moreover, Trump spoke in Davos in two faces: the president of a great country and a world-class businessman.

Today, many publications publish the speech of the American leader. True, in full rarely anyone. Often at the level of their own comments and conclusions. I think that I should not depart from the world tradition. Those who are interested in speech will be able to read the original on their own.

So what is Trump's first impression? It is the American version of the report on the work done before the board of directors of any corporation. "You are very lucky that you have me." Like that.

"Over the past year, we in the United States have achieved outstanding success. We provide assistance to forgotten residents of the country, create new exciting opportunities and help every American find their way to the American dream - the dream of good work, a safe home and a better life for their children."

Like this. No snot about the difficulties and difficulties. Trump clearly follows his own course, which he proclaimed back in the election program. America for Americans, and all the rest for America. Rough? Maybe. But then try to question the Trump achievements.

“After many years of stagnation in the United States, there has been a significant economic growth again. The stock market is breaking record after record, and after my election, it has increased its assets by more than seven trillion dollars. Consumer confidence, entrepreneurial confidence and industrial confidence have reached their highest in recent decades level

Since my election, we have created 2,4 million jobs. Business optimism in small business is at an all-time high. The number of new applications for unemployment benefits has dropped to almost the minimum level, which we have not seen for almost half a century. "

But the speech also contains other numerous facts of actual growth of the American economy. not tasks for the future, for later, but already accomplished facts. It seems to me that ordinary Americans, to whom all those Ukrainians, Europeans, Russians, Chinese and others, absolutely completely damn it, already understand today that they have chosen the one who was necessary for America.

It is strange to write this, but I agree with the citizens of the United States on this. Trump businessman makes the USA a large and successful corporation. A corporation that operates with one goal is profit, improved quality of life, domination in the world market.

And only this global goal forces the United States to demand the execution of laws by others or, on the contrary, to spit on all laws and treaties. Trump president at the economic forum gave way to the Trump businessman.

In principle, the main objective of Trump businessman achieved. World business heard it. And the above evidence of the success of domestic policy, especially in the field of economics and the revival of business in the United States, is quite untrue. Americans quickly reshape their own economy in a new way. They bring back the US appeal to world business.

And what about Trump President? We often speak and write precisely about the president, about US foreign policy.

It will be interesting to learn about who today is for the United States in the enemy. Do you remember the recent speeches of American politicians and the place of Russia? Alas, but in this speech the American president “forgot” about Russia. In the first place is the DPRK. But now the Americans no longer rely on their own strength. now Trump remembered the UN.

"My administration is proud to have led an important historical "work in the UN Security Council and around the world to unite all civilized states in the framework of our campaign, the purpose of which is to exert maximum pressure to achieve the transformation of the Korean Peninsula into a nuclear-free zone."

US appeals to the world community for help to fight the North Korean leader. Practically recognizing that own forces are not enough even for a small country. But Trump would not have been American if he had not appropriated at least a small victory to his own country. "Headed" the fight. Although the whole world perfectly saw the attitude of the United States to the resolutions of the UN Security Council. And an armada of ships off the coast of the DPRK.

The next enemy was, quite predictably, Iran.

"And we continue to urge partners to oppose Iran’s supporting terrorists and block its path to creating a nuclear weapons".

There is absolutely nothing unusual. After Trump effectively broke off the agreement on the Iranian nuclear program, it became obvious that Tehran would make every effort to go the way of North Korea. Agreements with the United States really are not worth the paper on which they are written.

Evidence of such a decision may well be the active actions of Iranian citizens in Ukraine, for example. Recall the recent detention of a Ukrainian citizen at Borispol airport with secret documents "on the sonar systems of the frigate Getman Sagaidachny." Americans are well aware that Ukrainian reality contributes little to the preservation of technology within the country. Including nuclear.

The next enemy of the United States is also traditional. ISIS (terrorist organization banned in the Russian Federation). Here again an American victory. The release of almost the entire territory of Iraq and Syria, efforts in Afghanistan to prevent terrorists on its territory. the truth is it looks rather pathetic.

Interesting conclusions? More than. Especially considering the anti-Russian hysteria in Washington. As well as statements of all kinds of military about the "tomorrow" Russian attack on NATO and the United States.

The American president could not help but touch on the topic of his own military spending. Especially since literally just these expenses have increased by 13%.

"We also invest heavily in the US military - because we cannot flourish without providing security."

Handsomely? Full The main thing is logical. Big business must be protected. And where should we have a big business now? In the United States. So the American money will be used to strengthen the state territory. Kim Jong Un frightened the Americans with his missiles.

But then the question arises about the "best friends of the United States" from Europe. NATO, which has always been talked about as an alliance of rich European states, is in fact just zilch without American funding. Ball inflated ambitions. And Trump understands that perfectly. Understands and once again "bends" the European elite. By the way, here you can "notice Russia and China."

“To make the world more secure from rogue regimes, terrorism and revisionist powers, we appeal to our friends and allies to invest in our own defense and fulfill our financial obligations. For our common security, everyone needs to contribute their fair share” .

There are things in Trump's speech that amaze with their wisdom and simplicity. Things that are spoken about, probably, in any country of the world. At least on our television, we can hear it right now with a bit of remote control.

“To be successful, it’s not enough to invest in our economy — we have to invest in our people. When people don’t think about them, when they are forgotten, the world is torn apart. Only by listening and responding to the aspirations of forgotten people, can we create a bright future, common to all of us. The greatness of a country is not only what it produces, but something more. The greatness of a country is all its citizens: the values, pride, love, devotion and character of the people who call this country their home. "

Well said. You can, of course, add something. You can say about the inhumanity of the political system itself. Everything is allowed. Just do not want. It would be desirable for us to say that and, most importantly, to do it.

We have forgotten a very small person by the scale. With his problems, desires, achievements and troubles. We are talking about ambitious projects and do not notice the absence of a doctor in a rural ambulance station. We are talking about the victory in Syria, but we do not see huge omissions in the culture and upbringing of children. We build, modernize, increase, strengthen ...

“Let's make a decision together to use our power, our resources and our voices not only for ourselves, but also for our people - in order to facilitate their share, inspire hope and support their dreams. Protect their families, people near whom they live, their history, their past and their future. "

This is not my phrase. This is the phrase of the American president from a speech at the economic forum in Davos 2018 of the year ... And it was said not to the voters at some rally. This is said to those who really can change a lot in this world. Due to political or economic weight. By virtue of his world-class talent. By virtue of his scientific genius.

Ctrl Enter
Noticed oshЫbku Highlight text and press. Ctrl + Enter
We are
Overseas ally? Donald Trump - US Presidential CandidateResults of the week. “In our cooperative, the board is always agreed”
33 comments
Information
Dear reader, to leave comments on the publication, you must to register.