Cinema: the death of Stalin, hysterics and hamsters ...

January 29 2018
106
With a brisk pace in specific Russian (well, technically “Russian” technically) media, the scandal around the comedy film “Stalin’s Death” has been forged by the media. “Pocket” film critics, network hamsters, belolentochnye youngsters and other liberal zoo are catching up to this event. At the same time in their political orgasm about the film itself almost forgotten that it is not surprising.


A little about the picture itself. If the “Red Heat” was a typical “cranberry”, insisting on an exquisite cognac of the “cold war”, then the “Death of Stalin” is the same “cranberry”, but floating in some kind of village Braga with a characteristic stench. And the point is not that the creators' brains have nothing but western mythology about our Soviet period storiesNo, not at all. The problem is that in the modern world under the screen of satire, free interpretation, etc. you can shove anything. Therefore, the authors of the picture are ready to laugh not only at the "stupid shovels", but also at the "victims of the Gulag." Which, by the way, is quite dogmatic for the West. In fact, who are we to them? Papuans True, the Papuans with nuclear weapons, space and nuclear industry, their own civilization, which does not allow zapadentsev sleep at night. So the kids decided to "joke." 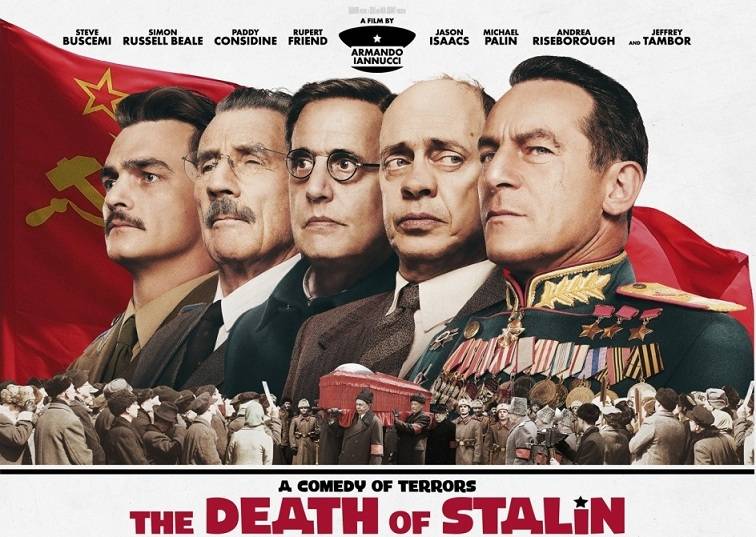 The director of the film was a typical semi-finished product of the united Europe - Mr. Armando Iannucci. This Italian boy was born in Scotland and still eats up on the land of Foggy Albion and Hollywood, shooting near-political comedy series. Having eaten up on these hacks himself a sickly self-conceit, he apparently decided that he could take something more substantial than a seasonal television product. Yes, and no extra money.

So it came to this Italian women almost all Soviet party leaders inadequate idiots. Against them, even Marshal Zhukov looks like a positive hero. This is despite the fact that he is depicted as a brutal uncle with a touch of the severity of Conan the barbarian, Zhukov in the film is endlessly hohmit with or without. The acting in this film is generally discouraging. Actors, of which noisy hamsters claim to be masters of "first magnitude" (this, by the way, is far from being so), recklessly make faces and make faces. As a result, they bring the tape to a natural circus freaks. To look at it becomes disgusting, even if you forget about who these actors embody on the screen. At the same time, I do not mention the “chafing” of endless shootings that took place in the “bloody scoop” instead of breakfast, lunch and dinner. 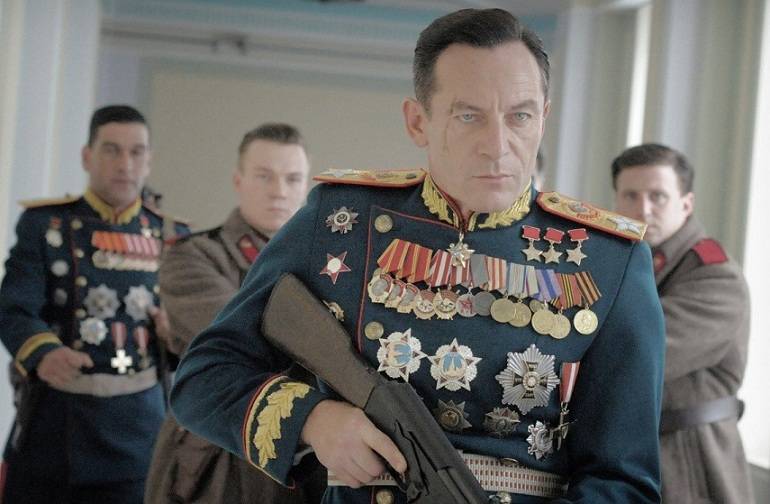 Naturally, a citizen of Russia, who has enough self-respect not to consider himself a Papuan and also has enough respect for history as a science, will have a normal desire to take the Italian by the breasts. Later, in the process of companionship, remind the presumptuous European semi-finished product of the frozen Italian icicles of the 8 Army, apparently lost in our steppes, or suggest joking about the Holocaust. Or bring an Italian proverb, which vividly depicts the attitude of the Italians themselves to their military-political figures - “if a newborn Italian hit on the ass, and he screams, it means he will be a great opera singer, and if he is stuck, he will be a great Italian commander”.

But, I fear, this artisan from the cinema simply does not understand this. After all, this European non-cosmopolitan fully shares the “European values”, and since there is a void behind the latter, they are replaced by various complexes. What is really there, the whole project called “The Death of Stalin” is a gall cynical spittle towards Russia (yes, yes, Russia, not the USSR) from Europe and its permanent owner, the United States, in order to get rid of these complexes. Well, what else can Europe justify its humiliated position raped by African and Middle Eastern aborigines? Europe, in which the witch hunt in the form of a fight against harassment zaskmarila men from Lisbon to Oslo? Europe, whose values ​​turned politicians and special services into impotent? Right, show the wild East. You look and a couple of thousands of fertilized Europeans is not such a high price.

By the way, the collective American-European character of this hack is emphasized not only by the national hodgepodge of actors (in one of the roles even Olga Kurylenko, now a representative of a European farm, is lit up), but also by the original source, on the basis of which this storm was removed. The basis was the French comic, which "progressive" hamsters persist in calling it a "graphic novel." Well, for those who didn’t read anything more than Navalny’s Twitter, of course, this is a novel ... The comic itself is totally permeated with the spirit of Шар Charlie Hebdo ’, therefore the humor in it is of an appropriate level.

Naturally, the scandal had to break out. But, as if the trash story in the free interpretation was not enough, promotion of hysteria around the project began long before the mention of this trash in the media. The story is downright detective with the wondrous scent of a well-played provocation and a touch of cultivated artificially liberal hysteria. 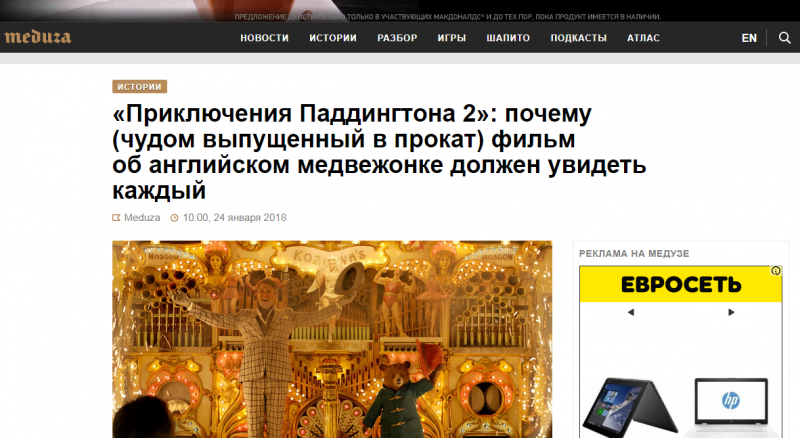 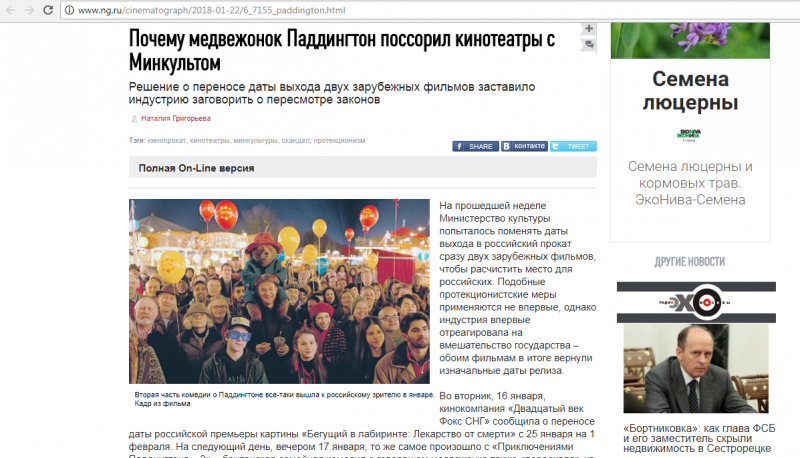 Some time ago, the media began to replicate the message that the family tape "The Adventures of Paddington 2" trying to ban. Mobilized network hamsters and hysterical citizens, nurtured by a “mime” Internet view of the world in which pink unicorns, if they vomit, it was a rainbow, were enraged. You see, “bloody mordor” is not only totalitarian, but also stupid, since it prohibits a completely innocent film. When it became known that no one forbade the picture, but simply postponed the date of the premiere, the mobilized hysterics made the face a book, pereobulsya and began to sink against interfering with the free market. And when news appeared in the information field that the premiere of “Paddington” was pushed for the sports drama “Movement Up” - a screech in a liberal monkey house forced the glass to break even in neighboring open-air cages. Considering that only one type of Soviet sportswear acts on the “handshake” like holy water on possessed with characteristic hiss and the release of sulfur, the reaction was expected.

But how does this relate to the painting “The Death of Stalin”? First of all, Paddington, the mimic British bear cub, and the death of Stalin, the same office, the Volga company, which has offices in the USA, rolls over the thrash. In general, for this desk scandal - just a gift. Secondly, "Stalin's death" is trying to push through right before the presidential election. At the same time push through with a thunderous crash and scandal. And finally, thirdly, in order to warm up the media space and tame juvenile hamsters, it was necessary first to demonize the Ministry of Culture with the example of fake information about banning a family movie. It’s not that I defended our Ministry of Culture and its head, this unlicensed version of Harry Potter, which turned part of the RVIO official website into its bookshop, but they didn’t aim at them, but at the stability of the information environment of the country, young people, already disfigured by modern education . 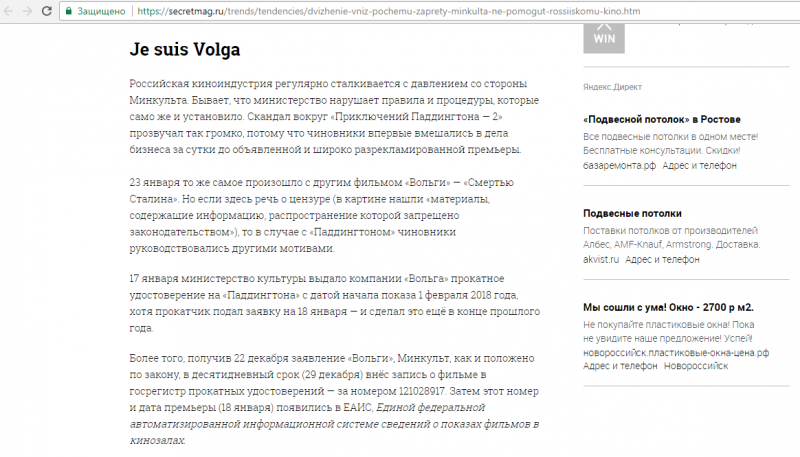 Well, you can come up with something yourself, hamsters?

It bore fruit. After the artificially bloated scandal with “Paddington”, not very clean liberal figures squeezed the Ministry of Culture into a full-blown “breath of freedom” in the form of the project “Death of Stalin” and excitedly shouted that the censorship was back. Moreover, this censorship immediately attacked the poor little bear first, and then stood up for the "bloody tyrant"! Horror!

Racing, without checking the information and without going into details, the assistants hurried to rush on this topic. And, no, they didn’t buy, they didn’t send out new training manuals, it’s just that when a kneeled pro-Western position becomes a fashion in certain circles, it’s just scary to fall out of the cage of “your party”. Talent, these guys do not shine, who needs them outside of this sewage life? One has only to look at the headlines of their information hack, as it becomes clear. The whole range of lack of talent - from the fierce kowtow to the witty level of the 5 class toilet class for boys. 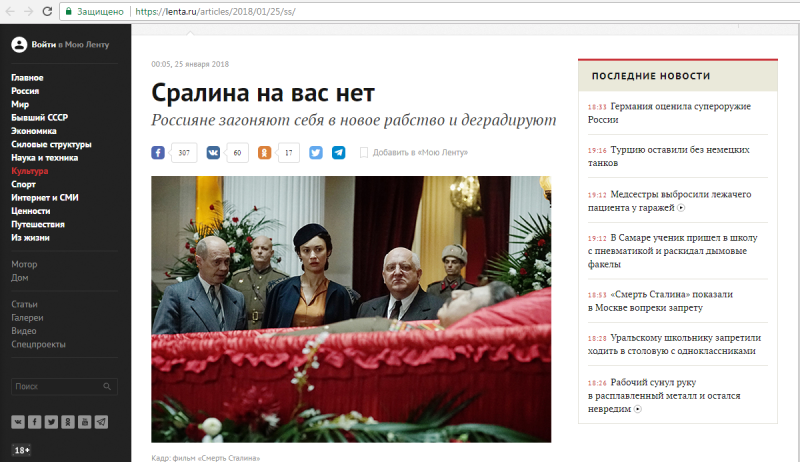 At the same time, even relatively sane cries for lost profits or the right to access information are also past the box office. The premiere of The Death of Stalin masterpiece took place ... in September 2017 of the year! Drain pictures in the network has already passed, and enthusiasts from the cinema have already posted their reviews on the network at various sites specializing in the film industry. By the way, some of these same reviews, instead of working with a screen like "people's opinion", on the contrary, only proved the absolutely political provocative nature of the situation. More than half of the laudatory texts consist of stinging near-political spittle, and the reviews themselves are mostly from the pen of the audience of our political pedophiles a la Navalny. However, they know how to foul up the comments and wind up the rating even for assorted paintings.

Therefore, the ban to roll a picture is quite reasonable, since it has nothing to do with either business or art. And, perhaps, this is the only thing that is capable of temporarily knocking down informational turbulence with the characteristic sprinkling of people around. Well, until the hamsters and their owners find another opportunity for “righteous” anger ... By the way, it’s not long to wait - the authors of the original comic about Stalin already paint pictures about the death of the Russian empire. Poklonskaya them in the pole.

Ctrl Enter
Noticed oshЫbku Highlight text and press. Ctrl + Enter
We are
Reports from the militia of New Russia for 27-28 September 2014 of the yearResults of the week. "Well, do not change me because of every idiot!"
106 comments
Information
Dear reader, to leave comments on the publication, you must to register.