World experience in the operation of submarines (PL) shows that accidents associated with various technical malfunctions and violations of the requirements for the operation of batteries (AB), resulting in fires and hydrogen explosions, are not extremely rare in the practice of submarine fleets. Over the past 70 years, they account for at least 3% of all accidents and disasters that occurred on the submarine.

Experience in eliminating accidents associated with a hydrogen explosion at submarines in various fleets countries of the world shows that the very fact of an explosion, the subsequent fire and their consequences, however, rarely lead to a submarine disaster and the loss of the entire crew. In most cases, the submarine floats to the surface, the fire is localized by the crew, and the submarine moves to a safe place under its own power or with the help of a tug. At the same time, the submarine's crew at sea can be evacuated by specially deployed rescue forces or ships, civilian ships and even submarines that are close to the accident.

What happened to the San Juan diesel-electric submarine

A number of Russian authoritative military experts agreed with this version and suggested that the explosion could occur due to violations of the operating conditions or malfunctioning of the battery itself. The root causes of the hydrogen explosion, according to the operating experience of the battery, can also include contact with seawater on current-carrying parts of the battery, which can cause a short circuit and an explosion in conditions of high hydrogen concentrations in the submarine compartments. This root cause of the accident on the submarine "San Juan" is considered as the most likely.

Subsequently, the Argentine Navy confirmed the root cause of the accident by making an official statement that during the last communication session, the commander of the Argentine submarine San Juan reported that water had entered the snorkel during battery charging, which led to a short circuit in the AB contact group. Snorkel is a submarine retractable device that provides diesel operation under water and is used to supply atmospheric air to the diesel compartment in the periscope position and remove diesel exhaust gases (in the domestic fleet it is called RDP).

The Argentinean military department is also considering another possible cause of the accident - a technical malfunction of the battery itself. Thus, the San Juan diesel-electric submarine in 2007 – 2014 underwent medium repair. In the process of repairing engines and batteries were replaced. The atypically long average repair period is explained by the lack of financial resources and the necessary number of qualified personnel. Moreover, according to Argentine media reports, it turned out that violations were discovered when purchasing batteries for the San Juan submarine. An inspection conducted by the Argentine Defense Ministry revealed that the established procedure for concluding contracts for the purchase of batteries for the San Juan submarine was violated. As a result, batteries with an expired warranty were purchased for the submarine. It is likely that these problems have affected the quality of repair of the electric power system, as well as the preparation of the San Juan diesel-electric submarines for release to sea.

Since the Sun Haun submarine has four compartments, and the buoyancy reserve is no more than 8 – 10%, flooding any of the compartments makes it impossible to ascend independently, even from small depths of several tens of meters. If the submarine failed for the maximum depth in the area of ​​the ocean depression and crushed it, there was no chance for the crew to rescue. But the question of what happened at San Juan can only be answered after finding the submarine and inspecting the outer and inner parts of the hull structure, as well as all the submarine equipment, studying material evidence of the causes of the accident, watch documents, technical control data, and so on. d.

Today, an international team involved in the search for the missing submarine has up to 30 ships and aircraft, as well as up to 4 thousands of people from 13 countries of the world. In addition to Russia, Germany, Brazil, Canada, Chile, Colombia, Spain, the USA, France, Norway, Peru, the United Kingdom and Uruguay participate in the search operation.

Russia sent to Argentina specialists from the 328-th expeditionary search and rescue team with a remote-controlled underwater vehicle (TPA) "Panther Plus" (lowered to a depth of 1 thousand meters), as well as the oceanographic research vessel "Yantar", equipped with two deep-water devices, allowing to conduct surveys at depths up to 6 thousand meters. During their participation in prospecting work off the coast of Argentina, the specialists of the search and rescue service of the Russian Navy aboard the Argentine Navy tug "Islas alvinas "fired several tens dives TPA" Panther Plus "at a depth of up to 125 1050 m for the bottom of the survey. During this period, two sunken fishing trawlers and two concrete blocks were discovered and classified.

As the experience of search and rescue operations of emergency submarines in different countries shows, especially many problems arise when they are organized at the initial stage. At the same time, a lot of time is lost on assessing the situation, various consultations and coordination. And in this case, every submariner knows, every minute is dear. Extra time loss can result in loss of real opportunities to save the lives of submariners. In this regard, in order to increase the efficiency of rescue of emergency submarines without extra coordination and consultations, Russia proposed the creation of an international coordination center to assist emergency submarines. This was announced at the 54 International Submariners Congress, which was held in St. Petersburg in June 2017. All participating countries, including Argentina, supported the Russian initiative.

An important practical step to ensure this idea was the revival in Russia of the specialization of deep-sea divers. The research institute of rescue and underwater technologies together with the expeditionary rescue team of the Russian Navy began training rescue divers for diving to depths above 400. Practical diving of deep-sea divers will begin this summer. 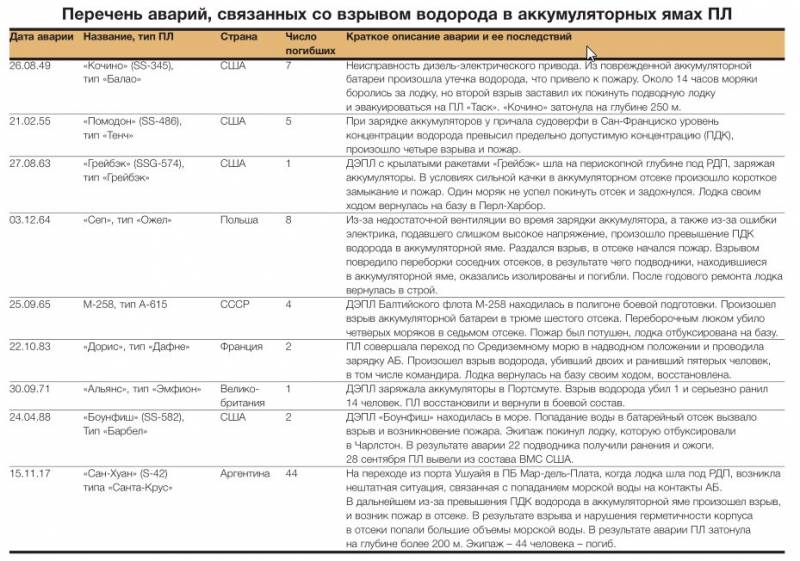 Ctrl Enter
Noticed oshЫbku Highlight text and press. Ctrl + Enter
We are
Hot underwater raids beginning of the Cold WarWhy do Americans "drown" our submarines?
20 comments
Information
Dear reader, to leave comments on the publication, you must to register.