The phenomenon of "Water Dragon" from the Middle Kingdom 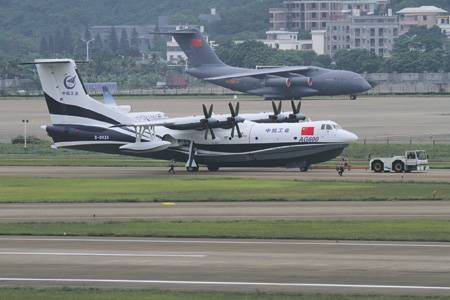 China does not cease to amaze specialists with its achievements in various fields of science and technology. Last year, the country set another record in the field aviation - Chinese experts independently developed, built and lifted a heavy amphibious aircraft.


The first flight of the first pilot prototype amphibious aircraft of the national development and construction of AG-600 "Jiaolong" ("Water Dragon") took place on December 24 2017 of the year from the airfield of Jingwan, near Zhuhai city in Guangdong province in the south of the country. The take-off took place at 09.39 in local time and passed normally. Flight AG-600 lasted about an hour. The chassis during the flight was not removed. During the first flight of an amphibious aircraft watched numerous spectators, specially collected at the airport. After landing, a new Chinese amphibian to the sounds of the march and the cheers of the crowd passed through the water “arch” formed by the jets of water from the fire engines.

However, the path to this success did not begin yesterday, but also in the 70s of the last century.

The first heavy seaplane developed in the PRC was the SH-5 seaplane (Shuishang Hongzhaji - "sea bomber"), created by the Harbin Aviation Plant (now Harbin Aircraft Manufacturing Corporation - HAMC) at the end of the 1960-s to replace the outdated Soviet Flying Aircraft Be- 6. The SH-5 design was completed in February 1970, however, the first flight of a Chinese seaplane took place only on 3 on April 1976, and serial production and supply of naval forces of the People’s Liberation Army of China (PLA Navy) was launched only in 1986.

When creating their seaplane, Chinese designers widely borrowed technical solutions used in Soviet and Japanese flying boats. In particular, the contours of the boat and retractable roll-out chassis were similar to the Japanese PS-1, and the tail empennage - an increased analogue of the plumage of the Soviet Be-12. In addition, the wing and engines of the Y-8 transport aircraft (the Chinese equivalent of An-12) were used. The maximum take-off weight of the SH-5 was 45 t.

In total, six SH-5 aircraft were manufactured, including the fleet four were transmitted (tail numbers 9113, 9123, 9133 and 9143). The first two prototypes (tail numbers 02 and 03) were used to test various equipment and weapons, while one machine was converted into an experimental fire-fighting aircraft - a water bomber. Both prototypes were the first to be decommissioned, in particular, the board “02” is currently on display at the Beijing Aviation Museum.

SH-5 seaplanes entered the 3-th separate naval aviation regiment based in Qingdao. By 2010, at least two cars were in flying condition, which, of course, no longer met modern requirements. However, this did not prevent the PLA Navy from attracting seaplanes to the combat training activities of the fleet forces.

In February, the 2013 of the year SH-5 participated in an exercise in which questions of conducting marine intelligence and conducting search and rescue operations were practiced. During combat training in May 2013, in the Qingdao region, one amphibian was lost (the tail number is unknown). However, the depreciation of the material part and the obsolescence of the seaplanes took their toll, and by the end of 2015, not a single SH-5 remained in the naval aviation of China. However, by this time, work was under way to create his successor.

THE BIRTH OF "DRAGON"

Officially, the AG-600 Chinese amphibian heavy aircraft program was launched in the 2009 year. The aircraft was developed at the Research Institute of Special Engineering (China Special Vehicle Research Institute, also known as the General Aircraft Research Institute) of the AVIC corporation. The Chinese are very jealous and carefully protect any information related to their defense programs anyway, therefore this machine was previously known by the designations JL-600, TA-600 and D-600. The current AG-600 index is used from the 2014 of the year.

Initially, it was planned that the first prototype should have been lifted into the air in the 2013 year, and deliveries of the first serial amphibians were to begin in the 2014 year. However, when creating the AG-600, Chinese specialists apparently faced numerous problems, which led to a three to four year backlog of work on this project from the originally planned schedule.

The plant in Zhuhai, in fact, is an assembly site, while the amphibian itself was built in broad cooperation with other aircraft manufacturers in China. In total, about 600 institutes and research centers and 150 enterprises of the PRC industry are involved in the development and production of AG-70. In this case, the developers say that more than 90% components for amphibians produced in China. At the same time, the AG-600 creation program is one of three Chinese programs for developing “large” aircraft that have a national priority (the other two are the creation programs of the Y-20 military transport aircraft and the С919 passenger airliner). According to reports in the Chinese media, about 600 billion was spent on AG-2009 since 3 of the year.

The solemn ceremony of rolling out the first flight prototype of an amphibian AG-600 with serial number 001 took place nine years after the launch of the program - July 23 2016. And already October 30, sparkling with fresh paint, the amphibian, which received the board number B-002А, took its place at the static parking lot of the Airshow China-2016 international aerospace salon.

Initially, amphibious developers announced their intention to fly the first AG-600 prototype into the air in 2016, but as part of the Airshow China - 2016, it was announced that the Chinese amphibian will make its first flight in the first quarter of the next, 2017, year. However, in reality, this period was also significantly shifted to the right.

FEATURES OF THE DESIGN

In terms of its aerodynamic layout, the Chinese “Water Dragon” is similar to the Japanese amphibian ShinMaywa US-2. This is a high wing monoplane equipped with advanced mechanization and a T-shaped tail. Like the Japanese car, the emphasis in the design of the aircraft was placed on achieving long-range and high seaworthiness. Like all US-2, tunnel longitudinal channels are located on the bottom in front of the cheekbone to reduce flooding in the bow. The main landing gear is also, apparently, made in the image of the Japanese car. The AG-600 powerplant includes four Chinese turboprop engines (TVD) of the WJ-6 type with six blades JL-4 propellers. Note that, in terms of its take-off mass, the Water Dragon has become the world's largest amphibian aircraft with turboprop engines, ahead of its Japanese prototype.

The main objectives of the new amphibious creators called the execution of maritime patrol and search and rescue operations, as well as extinguishing fires. It should be noted that on the first AG-600 there is no large cargo lifter in the bottom of the boat (like the domestic amphibians Be-12 or A-40), but there are two pairs of small hatches (probably water tanks) in the bottom behind the redan.

According to the developers, in the “water bomber” version, the Chinese “Water Dragon” will be able to take up to 12 tons of water on gliding in 20 seconds. According to the above calculations, at one refueling, the AG-600 will be able to dump up to 371 tons of water into fires. In the search and rescue version of the AG-600 can take on board up to 50 affected - at a distance of 1600 km from the departure aerodrome.

Despite such peaceful tasks assigned to AG-600, most likely, its “habitat” will nevertheless become disputed island territories in the waters of the South China Sea. However, the creators themselves amphibians note that in addition to the above, it is possible to create other modifications, including the military. And the Chinese state news agency "Xinhua" in general bluntly called the plane "defender of the seas, islands and reefs." In the Chinese press, it is noted that the new amphibian, based on the Chinese island of Hainan, is capable of reaching the coastal waters of the Malaysian island of Borneo without refueling.

According to Chinese official sources, an order for the Water Dragons 17 has already been issued. In total, the needs of China are estimated at 50 amphibious aircraft of this type. It is planned to achieve the pace of production of AG-600 at the level of five aircraft per month.

In addition, China expects to export these aircraft. “From the first day of the design, AG-600 was intended as an aircraft for sale on the world market. We are confident of export success, since our aircraft has no equal in the world in terms of its characteristics - in terms of the maximum take-off mass and flight range - ”said CAIGA general manager Qu Jingwen. He also noted that "AG-600 interested countries with numerous islands, such as Malaysia and New Zealand, and we are in contact with them." In total, according to forecasts of Chinese experts, taking into account exports, it is planned to build X-NUMX amphibious aircraft AG-150.

So, the new Chinese amphibian took off. But what next?

"The first flight was successful, and this fact puts China in the ranks of the few countries in the world capable of developing a large-sized seaplane," said Juan Lincai, chief designer of the AG-600 seaplane. This is true, and it should be noted that in recent years, the vector of development of the world seaplane building industry has confidently shifted to the Far East. And this is primarily due to the activities of Chinese aviation engineers and designers. 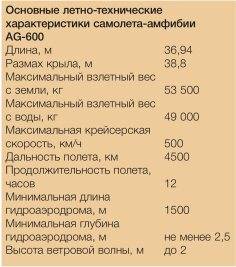 Nevertheless, it cannot be said that the future of the Water Dragon is cloudless. Ahead are flying from the water, which will show how far Chinese experts have advanced in areas such as aerodynamics and hydrodynamics, as well as the creation of corrosion-resistant materials. It is significant that in recent years, the Chinese side has been very actively showing interest in domestic seaplane construction, in particular, the Russian Be-200 and Be-103 seaplanes. However, it seems that Beijing in this case is not so much interested in large-scale deliveries of Russian amphibian aircraft, but in the possibility of obtaining appropriate technologies.

In addition, it can be considered an accomplished fact that the new aviation seaplane manufacturer entered the world aviation market, which will certainly complicate the promotion of the domestic amphibious aircraft Be-200 on the markets of Southeast Asia (this is currently the most promising market for domestic seaplanes). Therefore, we must be prepared for tough competition with both Chinese and Japanese amphibious aircraft, in particular, to draw the necessary lessons from the loss of the domestic machine of the Japanese flying boat US-2 in India. In addition, there is an urgent need to intensify research and development work on the development of new amphibian aircraft, now practically collapsed.

Ctrl Enter
Noticed oshЫbku Highlight text and press. Ctrl + Enter
We are
An-12 in AfghanistanMiG-21 in Afghanistan
15 comments
Information
Dear reader, to leave comments on the publication, you must to register.