Washington is worried about Russia and China 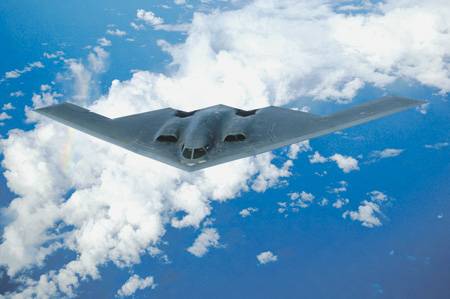 During his election campaign and after his election victory, Donald Trump repeatedly spoke of his firm intention to put the US strategic nuclear forces (SNF) at the top of the world nuclear pyramid. Indeed, the first order issued by the Supreme Commander-in-Chief of the Armed Forces (AF) of America to his appointed Secretary of Defense retired General of the Marine Corps (ILC), James Mattis, was an order from January 27 2017 about assessing the current capabilities of the United States nuclear forces and formulating proposals for their further development . And 11 in January of this year in the American press, a message appeared on the draft report entitled “Nuclear Posture Review” and its full text.


After discussing the “Nuclear Forces Review” (SNF), the size of which is 47 pages, the Pentagon will submit its edited version to the President in various interested instances. The draft SNF corrected the last similar document issued in 2010, formulated a new nuclear policy, established the number of required nuclear units and formulated the concept of their further construction.

CONTAINING THE MAIN ENEMY OF AMERICA

As noted in the draft, today the main opponents of America in the field of nuclear confrontation are Russia, China, the DPRK and Iran.

Russia, as always, appears as the main antagonist of Washington, because its nuclear potential is so high that only Moscow is capable of delivering a nuclear attack on the United States, the consequences of which can lead to their complete destruction.

As noted in the document under review, today Russia has ceased to be the Soviet Union, and the cold war is over. However, despite all the efforts of the United States, at the present stage, the Kremlin views America and its NATO allies as its main opponents and main opponents of the realization of its geopolitical goal in Eurasia.

Today, the document indicates, Russia has significantly increased the combat capabilities of its conventional forces in order to ensure dominance in the territory of its neighboring states. However, it has violated and continues to violate numerous treaty obligations and many other international agreements.

The greatest concern in the United States is caused by the policy of the Russian leadership in ensuring national security, strategies and doctrines, which include provisions on limited nuclear war, as well as measures taken by Moscow to improve nuclear forces and expand their combat capabilities. The Kremlin, as indicated in the document, declares Russia's right to be the first to launch a nuclear strike. The basis of this approach, as the authors of the SNF project believe, is the erroneous opinion of the Russian leaders that such a threat or limited nuclear attack can paralyze the United States and its allies and allow it to end any conflict under conditions advantageous only to Russia. 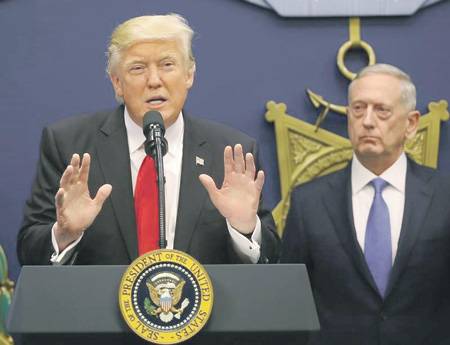 At the present stage, effective deterrence of Moscow from a strike by conventional or nuclear forces on the United States requires convincing the Russian leadership that it does not imagine the consequences of such a confrontation with the United States or with its allies. The Kremlin must clearly understand that such actions will not only ensure the solution of its tasks, but also lead to an escalation of the conflict and will cost him dearly. Therefore, at the heart of the United States nuclear strategy, it is stated in the draft review, is the White House’s desire to convince the Russian leadership that any use of nuclear weapons, even on a limited scale, is completely unacceptable.

The US strategy to contain Russia must be adapted to demonstrate the risk it may face in the event of an aggressive policy. Only such a strategy, the authors of the considered document are sure, is able to guarantee that the Kremlin is finally aware of the fact that it does not have any advantage over potential adversaries, even in conditions of increasing the combat potential of conventional and nuclear forces, which would make it possible to solve standing tasks in normal or limited nuclear war.

At the NATO summit in 2016, it was stated that the countries of the alliance will firmly follow the established principles of collective security and protect those members who are threatened from the outside. The bloc countries will in every way develop their capabilities to counter external aggression and ensure the protection of their citizens. To ensure that these tasks are resolved and influence the false notions of the Russian leadership on the superiority of its Armed Forces, the SNF draft says, the US president should be given every opportunity to deter Moscow from attacking the United States by conventional or nuclear forces, which today may include strikes against control systems America's nuclear forces, both in space and in cyberspace.

Professor Keith Payne, head of the Defense and Strategic Studies Department at the University of Missouri, said that the West should demonstrate to Russia that, despite its leadership’s assessment of the combat capabilities of conventional forces and nuclear formations, allegedly superior to NATO troops, the leaders of the countries of the Alliance have enough political will and military formations to resist the Russian aggressor, even in conditions of roses of nuclear war.

The draft “Review of Nuclear Forces” cites the words of Secretary of Defense James Mattis, who said that at present the US strategic nuclear forces are in a state of combat readiness capable of ensuring effective protection of the country, its allies and partners. But the new document of the American military department says that all means of delivering nuclear warheads to the target, the warheads themselves and the control system of the nuclear forces are outdated, have reached their deadlines and do not meet modern requirements.

Therefore, in the short and long term, the Pentagon will need to implement a large set of measures that will bring all the components of the nuclear triad in line with modern requirements and maintain them at the level necessary to solve their combat missions in a changing world situation and ensure strategic stability .

In 2028, the Pentagon plans to begin deployment in the army of new intercontinental ballistic missiles (ICBMs), developed under the program Ground Based Strategic Deterrent. These missiles will replace the “Minuteman-3” ICBM (LGM-30G), which have been in service with the American Armed Forces for almost 40 years. In addition, modern missile control systems and their rear support components, which are being created or upgraded under the same program, will be put into operation.

The United States Department of the Navy has implemented programs to upgrade strategic Ohio-class nuclear-powered submarine missile carriers, which have allowed them to extend their service life from 30 to 42 years. But a further increase in the duration of the life cycle of these submarines is no longer possible. Therefore, in the coming 10 years, all the necessary funds should be allocated for the implementation of the new Columbia strategic submarine missile carrier program, which will replace the Ohio submarines.

The Ministry of the Air Force (Air Force) is working on the modernization of the strategic bombers B-52 and B-2. These aviation nuclear weapons delivery systems are equipped with new radar stations and other equipment that will allow them to solve their problems in the context of counteracting enemy air defense systems. But the Pentagon’s aviation ministry’s main efforts are focused on creating stealth B-21 Raider long-range strategic bombers. These bombers will be able to successfully overcome all enemy air defense systems. They will be able to carry both conventional and nuclear weapons. It is assumed that starting from the middle of the next decade, the B-21s will begin to complement, and closer to the 50s of this century, the B-52H, B-1B and B-2A strategic bombers that are in service with the US Air Force will be completely replaced. The total number of new generation bombers should be 100 units.

In accordance with the nuclear plans of the Pentagon, the US Air Force will continue to develop a new high-precision long-range cruise missile (Long Range Stand-Off - LRSO) with a nuclear warhead. They also lead the implementation of the program to extend the life of the B61-12 thermonuclear tactical bomb, and most recently successfully tested it. In accordance with the Nuclear Forces Survey project, the arrival of these bombs in troops should begin early in the next decade, and LRSO missiles will be mounted on US Air Force bombers in the early 2030s.

According to the draft Trump administration’s new nuclear plan, Washington intends to lower the threshold for banning the use of nuclear weapons. The White House is going to announce its right to use nuclear weapons in response not only to a nuclear attack, but also to the use of non-nuclear means, which resulted in large human losses, the defeat of the most important elements of the national infrastructure, similar facilities of their allies or partners, the defeat of the US nuclear or nuclear weapons. their allies, disabling communication centers and control of strategic forces, as well as warning systems and assessment of the means of attack.

One of the proposals from the authors of the SNF is to equip the Trident II (D5) sea-based ballistic missiles with new low-power nuclear warheads. Changes in the design of warheads, according to experts, will lead to the fact that these missiles will move into the class of tactical nuclear weapons, equipped with conventional small-capacity nuclear weapons.

Thus, the Pentagon intends to obtain a new toolkit for "deterring Russia." According to the initiators of this proposal, the beginning of the war between Russia and NATO will inevitably force the Kremlin to use tactical nuclear weapons in the theater of military operations in order to narrow the gap in the military potential of the parties. The authors of this approach are absolutely confident that Russia will try to take advantage of the reluctance of the United States to use sufficiently powerful nuclear weapons in local conflicts in Eastern Europe.

One of the special points of the White House's new nuclear program is the return to the US Navy’s arsenal of TLAM-N cruise missiles. These missiles can carry nuclear warheads ranging from 5 to 150 CT. They are intended for striking a ground target at a distance of up to 2500 km. Missiles of this type remained in the arsenals of the American fleet until the beginning of the 2010-x, but by 2013-m were removed from service. After upgrading, their nuclear warheads W80 were supposed to be used for LRSO cruise missiles.

The draft “Review of Nuclear Forces” does not give the total figure of the costs of introducing all the innovations in America’s nuclear economy. However, according to recent estimates by American experts, in the coming 30 years, the US will have to spend at least 1,2 trillion on the development of US strategic nuclear forces. Half of them should be spent in the 20s of the current century. Most likely, that will happen.

Publication of the final version of the document in question should take place in February of this year. And then it will become perfectly clear about Washington’s nuclear intentions and to what compromise in this area came its politicians, administrators and military. But now we can say that this document is unlikely to undergo any significant changes and Russia will cease to be the main enemy of America, and the White House, with the suicidal obsession, will cease to lead the world to a third world war, after which the land can become completely uninhabited.

Ctrl Enter
Noticed oshЫbku Highlight text and press. Ctrl + Enter
We are
Trillions to the third worldAmerica will have to pay a trillion dollars for a new nuclear fist
14 comments
Information
Dear reader, to leave comments on the publication, you must to register.