German media: "New armored vehicles of the Bundeswehr are too old" to intimidate Russia

January 26 2018
54
The new German infantry fighting vehicles are “too old” and are not suitable for participation in a military operation against an “attacking enemy who uses the most modern types of weapons,” said journalist Sabine Ziebold in an article for the German TV channel N-TV. 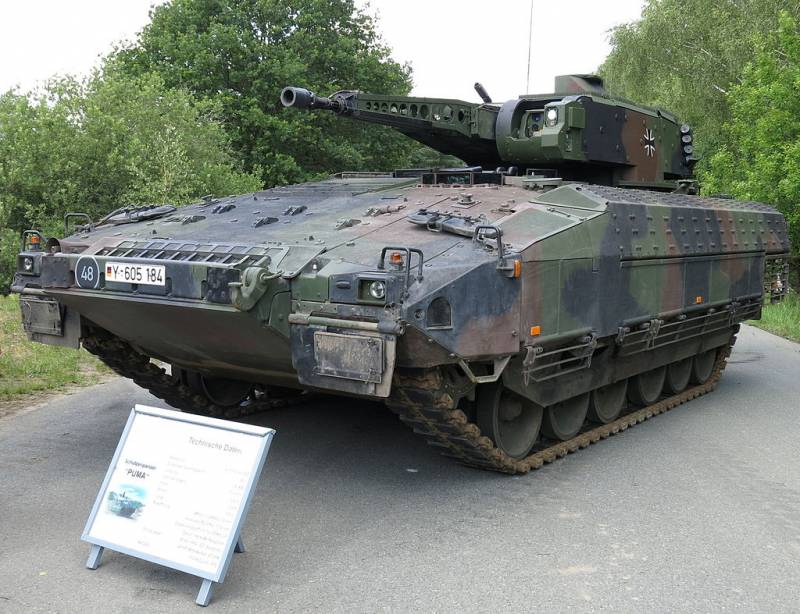 However, Puma, it seems, has rather become a new difficult child: weapons are already outdated, additional equipment is expensive, and time to combat use just enough.
quoted by the author InoTV.

According to the journalist, about € N 500 million are required, so that the armored vehicles necessary for the 40 миссии mission ’are ready for it.

She notes that currently "the Bundeswehr has already received 190 from 350 Puma armored vehicles, ordered from Krauss-Maffei Wegmann (KMW) and Rheinmetal." But they arrived in the basic configuration and are not suitable for participation in a military operation against the "attacking enemy, which uses the most modern types of weapons."

We put what we agreed in the contract,
A spokesman for Krauss-Maffei Wegmann said.

"German Tanks are needed to intimidate Russia, and the last word - whether additional equipment of 40 Puma armored vehicles will be carried out - remains with the German Ministry of Defense, ”writes Siebold.

In conclusion, she stressed that “according to the information of knowledgeable persons, the ministry has still not decided whether to approve or not the allocation of the necessary 500 million euros for this”.

Ctrl Enter
Noticed oshЫbku Highlight text and press. Ctrl + Enter
We are
World market and production of armored vehicles (part 1 of 3)
54 comments
Information
Dear reader, to leave comments on the publication, you must to register.