January 26 2018
43
The first of the fifth-generation F-35A multi-purpose combat aircraft purchased in the United States arrived on Friday at the Japanese Air Force Base Misawa in the extreme northeast of the main island of the country Honshu. He flew there from a military airfield at the plant of the industrial corporation Mitsubishi Heavy Industries in Aichi Prefecture, where these machines are assembled and tested, reports TASS with reference to the news agency Kyodo. 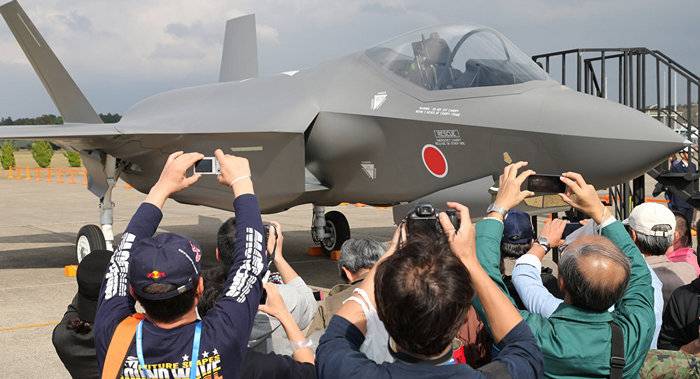 In total, ten F-2018A air forces of Japan will be deployed to the Misawa base in 35. Their deployment there is primarily intended to strengthen the combat capabilities of Tokyo in relation to the DPRK.

In total, Japan plans to purchase at least 42 F-35A in the United States, which will become the basis of the power of the national Air Force.

The question of the additional acquisition of such aircraft is being studied. The press, in particular, reported that the possibility of purchasing their modification, capable of a very short run and vertical landing, is being considered. Such aircraft could potentially equip two Izumo-class helicopters of the Japanese Navy, which after this would actually be converted into light aircraft carriers.

Tokyo has also made a decision to purchase long-range air-to-ground cruise missiles for the F-35A.

The purchase of such aircraft with excellent combat characteristics is of great importance in conditions when neighboring countries significantly increase the capabilities of their military aviation
- Japanese Minister of Defense Itunori Onodera said at a press conference in Tokyo on Friday.

Ctrl Enter
Noticed oshЫbku Highlight text and press. Ctrl + Enter
We are
Mitsubishi Heavy Industries has introduced a new armored personnel carrier for the rapid deployment brigadeThe Japanese demonstrated the first F-35, assembled in the country
43 comments
Information
Dear reader, to leave comments on the publication, you must to register.