Because of the advantages of NATO, war with Russia will be nuclear

January 29 2018
96
A military conflict between NATO and the Russian Federation will lead to a nuclear war. The nuclear scenario is most likely when NATO has an advantage. In this world war, billions of people will die. 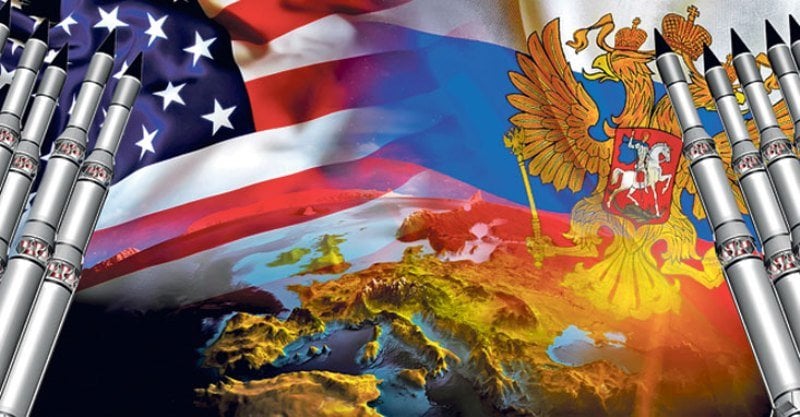 About the possible advantage of the North Atlantic alliance in the war and the offensive "Doomsday" writes in a popular magazine "National Interest" famous analyst Dave Majumdar.

Why does the war with Russia lead to a nuclear catastrophe that will kill billions of people? That was the question Dave Majumdar asked. And tried to answer it. In a written form.

A counter-attack by the NATO forces of the Russian forces would be a bloody response and would lead to the highest risk of an escalation of the conflict, the analyst believes. However, just such a scenario is “one of the likely results of the Russian invasion,” the specialist is confident.

In the case of a NATO counterattack, traditional Russian forces, “of which only a part are well trained and well equipped,” will suffer serious losses or will be completely destroyed, explains Majumdar. And if NATO forces then attack targets inside Russia, or even "move onto Russian territory," the Kremlin may conclude: there is a danger of "state existence." In the end, after all, Moscow has repeatedly “expressed concern” that Western plans for regime change in Russia are “too real a danger”. And in this situation, Majumdar points out, Russia can decide to oppose the advancement of NATO forces "with its arsenal of tactical nuclear weapons».

A recent study by the RAND Corporation showed that Russia could capture three NATO states within sixty hours: Estonia, Latvia and Lithuania. Nor did the war games of the brain trust imitate the use of nuclear weapons. If a war breaks out between NATO and Russia, “nuclear weapons will certainly come into play, especially if the conflict develops in a bad direction for Moscow,” the analyst believes.

In contrast to the Soviet Union, which adhered to the policy of non-first use of nuclear weapons, modern Russia, the author recalls, "directly rejected" this provision - and this refusal happened back in 1993 year. The traditional military forces of Moscow were falling apart during the economic and social crisis of the 1990s, and Russia finally adopted the “de-escalation” doctrine. Here is the 2000 doctrine of the year in brief (in the vision of Majumdar): if Russia faced a large-scale attack, the result of which would be the defeat of its traditional forces, Moscow could resort to nuclear weapons.

In the 2010 year, the foreign author continues, Russia “revised this doctrine somewhat” as its usual forces began to recover. And in the current version of the doctrine it is stated that Moscow will use nuclear weapons in those situations “that would endanger the very existence of the state”.

The current RAND study shows that Russia could easily have seized the Baltic, but the war game did not consider the case when a NATO offensive would be launched. It speaks only of the quick defeat of the Baltic countries, as a result of which the North Atlantic Alliance would be in a bad situation and with a limited number of answer options. All the answers would be “bad”: a counteroffensive fraught with blood, losses and the risk of escalation of the conflict. The most peaceful option from NATO is a temporary “concession” to the Russians, that is, recognition of defeat. This has disastrous consequences - no, not for the Baltic countries, but for the alliance.

Meanwhile, according to Majumdar, it is precisely the NATO offensive, albeit bloody, that would become "one of the likely consequences of the Russian invasion." And in this case, the Russian traditional forces would most likely be destroyed. Or they would have suffered significant damage.

As for the Russian tactical nuclear arsenal, the analyst writes further, it is not as large as the Soviet arsenal was once. True, the exact data "difficult to find."

It was believed that the Soviet Union possessed from 15.000 to 25.000 units. tactical nuclear weapons of all types, up to medium-range ballistic missiles.

According to the US Congress, Moscow is gradually destroying its non-strategic arsenal. The reduction has been going on since the end of the Cold War. In today's Russia, however, there are up to 4.000 tactical nuclear units. However, other experts suggest that Russia has only 2.000 tactical units of nuclear weapons. But these data are hardly accurate. A relatively recent analysis by the Royal United Service Institute of Igor Sutyagin (Great Britain) showed that Russia has no more than 1.040 units. non-strategic nuclear weapons. Of these, from 128 to 210 warheads are in service with the Russian ground forces. In Russian navy there are about 330 tactical units of nuclear weapons, the Russian Air Force - 334 units The air defense forces of the Russian Federation have another 68 to 166 tactical nuclear weapons mounted on various ground-to-air missiles. Finally, according to a report presented by the Federation of American Scientists, Russia generally has no deployed non-strategic nuclear weapons. All tactical units are "in the central storage", and "several thousand decommissioned non-strategic warheads are awaiting dismantle."

On that "study" of experts and analyst Majumdar ends. The idea of ​​specialists is clear: Americans and NATO should not be so afraid of the Russian nuclear response and the "escalation" - the Russians may not have time to give a tactical nuclear response. They are all gathering dust in warehouses or outdated and waiting for disassembly.

On the other hand, analyst Majumdar hints at the “billions” of future victims of the new war. Obviously, behind these words lies the analyst's opinion about the possible use of Russian strategic nuclear weapons, and not tactical ones. It is logical: since the Russians are not ready to fight with tactical "units", strategic ones will be used. But what about: there is a danger to the "existence of the state."

The specialist sees salvation for the West in one thing: in the power of NATO. The alliance must certainly have “advantages” over the Russians. Apparently, this is the main message of the whole article. The more NATO has the military strength and technical advantages, the less chances Mr. Putin has for the occupation of the Baltic countries.

But why does the Kremlin need the Baltic countries? Not a single Western expert not only answers this question, but, in fact, does not even put it. The only answer that foreign analysts and politicians give is this: Putin wants to restore Russia's former greatness and extend the borders of the Fatherland to the former borders of the USSR. However, this is only a parody of the answer.

Observed and commented on Oleg Chuvakin
- especially for topwar.ru
Ctrl Enter
Noticed oshЫbku Highlight text and press. Ctrl + Enter
We are
Results of the week. Russian leaders in everything!The National Interest: this is why the Russian army is a paper tiger
96 comments
Information
Dear reader, to leave comments on the publication, you must to register.