January 29 2018
145
If someone believes that the era of screw warplanes is forever in the past, he is mistaken. In Brazil, the aircraft manufacturer Embraer is not so sure. It is here that the EMB 314 Super Tucano light turboprop attack aircraft is produced today, which is in demand on the international arms market and consistently finds its customers. Since 2003, Brazil has already produced more than 240 of such attack aircraft that are used by the 18 Air Force states, while the 99 of the Embraer EMB 314 Super Tucano light attack aircraft are in service with the Brazilian Air Force.


Speaking of attack aircraft, many immediately recall the Soviet / Russian attack aircraft Su-25 “Grach” or the American A-10 Thunderbolt II “Warthog”, however, for the solution of a number of tasks, the capabilities of these aircraft seem clearly excessive. The lightweight turboprop EMB 314 Super Tucano successfully exists in its own niche, proving that despite the past golden age of assault aviationthat fell on the Second World War, such aircraft are still in demand and do not have to be reactive. The light attack aircraft Embraer EMB 314 Super Tucano, also known as the A29 Super Tucano, belongs to the class of counterguerrilla aircraft.

Lightweight turboprop attack aircraft EMB 314 Super Tucano was created by engineers from the Brazilian company Embraer based on a light two-seat turboprop combat-training aircraft EMB 312 Tucano. The development of this combat training aircraft began back in 1978, the first prototype took off in 1980, the aircraft was actively exported from 1984. When looking at these two aircraft their relationship becomes unquestionable, both cars are easily confused. 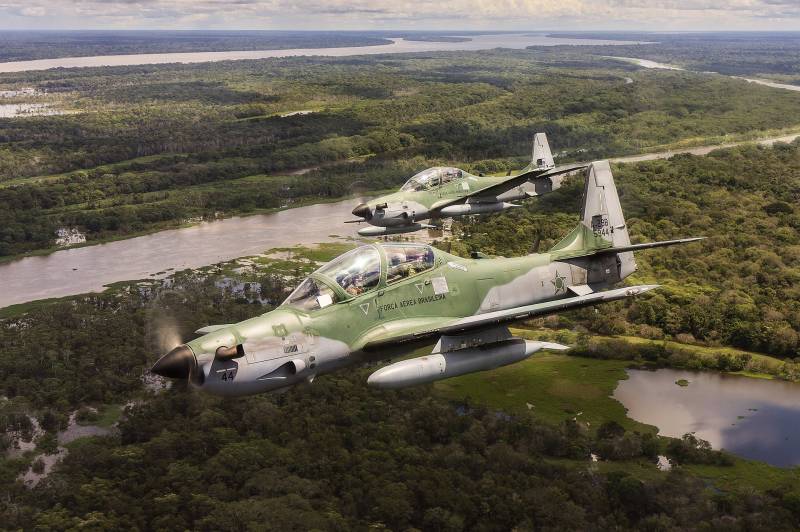 EMB 314 Super Tucano / A-29B Brazilian Air Force
The EMB 314 Super Tucano is notable for its increased length, enhanced airframe, increased combat load and a more powerful engine, and the cockpit dimensions were also increased for more convenient pilots. In addition, the aircraft received modern avionics and the so-called "glass cabin". The pilot has at his disposal two large liquid crystal displays with an active matrix of size 6 x8 inches. Also, the attack cockpit received protection in the form of Kevlar armor. In the cab can be installed ejection seats Martin-Baker MK-10lCX. On the plane appeared on-board oxygen equipment with a system for generating oxygen, anti-overload suits for pilots and some other improvements, for example, the climate system that ensures the most comfortable work of the crew. And the presence of a modern military autopilot reduces the burden on pilots when performing long-term flights.

The first flight of the EMB 314 Super Tucano prototype took place in the 1999 year, since 2003, the aircraft has been in service with the Brazilian Air Force and is being actively exported. The cost of one aircraft is estimated at 9-14 million dollars. The price is one of the main advantages of the Brazilian light attack aircraft. One aircraft costs much less than helicopters used for the same purpose. For example, the cost of the Russian Mi-35M combat helicopter is more than 36 million dollars. The advantages of attack aircraft also include the possibility of action from any runways, including unpaved airfields. The aircraft can easily change its location. In this case, the machine has not gone away and the functions of a training aircraft. In places of permanent deployment, the lightweight Super Tucano attack aircraft can also be used to carry out training missions, very often the aircraft is used to improve combat skills by jet pilots.

Embraer EMB 314 Super Tucano is made according to the normal aerodynamic configuration, it is a low-wing aircraft with a straight wing. The fuselage of a semi-monocoque aircraft. Chassis - tricycle, each landing gear has one wheel. A Pratt & Whitney PT6A-68/3 turboprop engine is used as a power plant, developing a maximum power of 1600 hp. Thanks to this engine, the aircraft can accelerate in flight to 590 km / h. 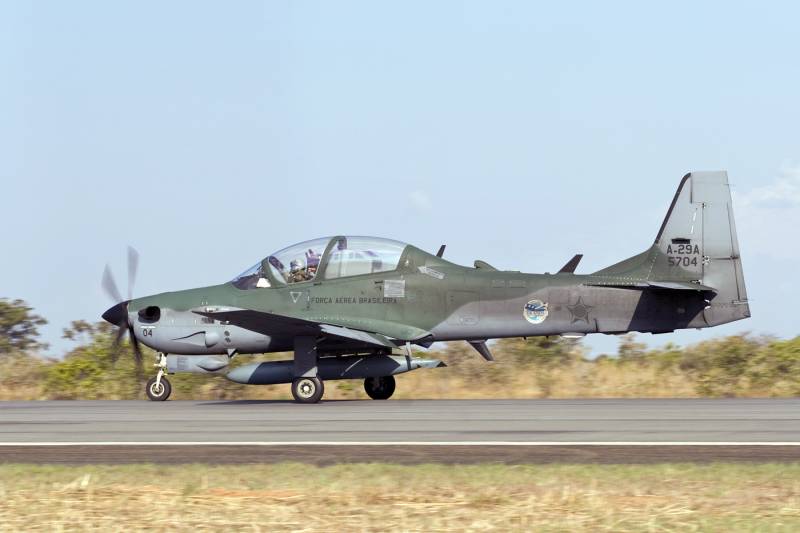 EMB 314 Super Tucano / A-29A Brazilian Air Force
As noted in the company Embraer, the glider of the aircraft in single and double versions was designed taking into account the latest technologies and automation of design processes. When performing standard training missions, the manufacturer guarantees the aircraft a service life - 18 thousands of hours or 12 thousands of flight hours, depending on the load and tasks solved by the aircraft. The airframe design has reliable corrosion protection and has good strength characteristics. Light attack aircraft can withstand overloads in the range from + 7 to -3,5g.

The aircraft can be used in conditions of high humidity and ambient air temperature; it has very good take-off and landing characteristics, which makes it possible to use it effectively even from short runways. The attack cockpit is protected by Kevlar armor, which provides protection against rifle-rifle armor-piercing bullets - 7,62 mm from 300 meters. Also, according to the manufacturer, the cockpit can withstand a collision with a bird at a speed of 270 knots (500 km / h). In addition to Kevlar armor, the crew and aircraft are also provided by modern information systems: MAWS (Missile Approach Warning System) missile warnings and aircraft radar warnings of the enemy’s RWR (Radar Warning Receiver) missile warnings, attack aircraft, and DPS and IR shooting devices. - traps. 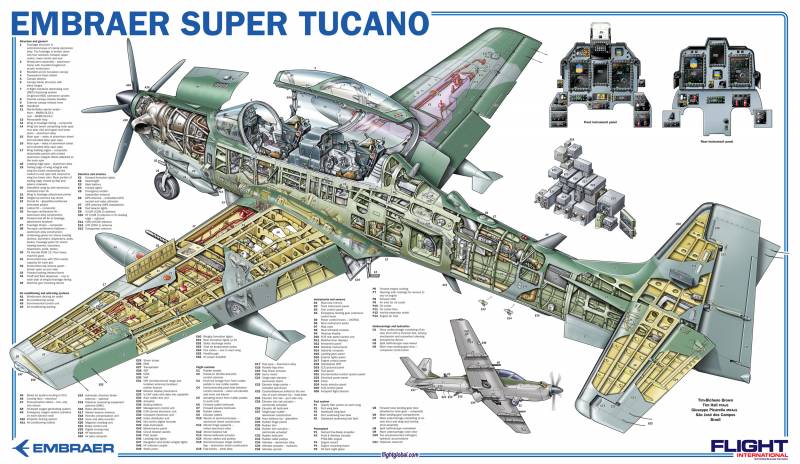 The shock version of the Super Tucano turboprop aircraft differs from the more common model in that the 400-liter protected fuel tank is installed at the location of the co-pilot, which significantly increases the time the aircraft is in the air, expanding its combat capabilities and increasing the time and patrol range. Single light attack aircraft Super Tucano, according to the assurances of representatives of the company Embraer, can be equipped with equipment that allows it to operate at night. So it turns into a kind of real night fighter, which can be used to intercept light aircraft of drug traffickers and smugglers. The tests have shown that the aircraft can effectively be used to fight the enemy’s helicopters.

The main advantage of the double version of the A-29B Super Tucano, as you might guess, is the second crew member. This is the case when the proverb “one head is good - and two is better,” reveals itself fully. The second member of the attack aircraft crew, acting as a weapon operator and observer pilot, can be very useful in conducting operations that involve a long patrol of the terrain with a subsequent transition to the shock phase.

The EMB 314 Super Tucano light turboprop attack aircraft can carry various types of weapons that can be easily combined depending on the combat missions to be solved. Two large-caliber 12,7-mm FN Herstal M3P machine gun with 200 ammunition per barrel are built into the wing of the aircraft. Also, an 20-mm fast-firing aircraft cannon can be installed under the fuselage of the aircraft, and an additional two 12,7-mm or four 7,62-mm machine guns (500 ammunition cartridges per barrel) can be additionally mounted on the wing wing assemblies. 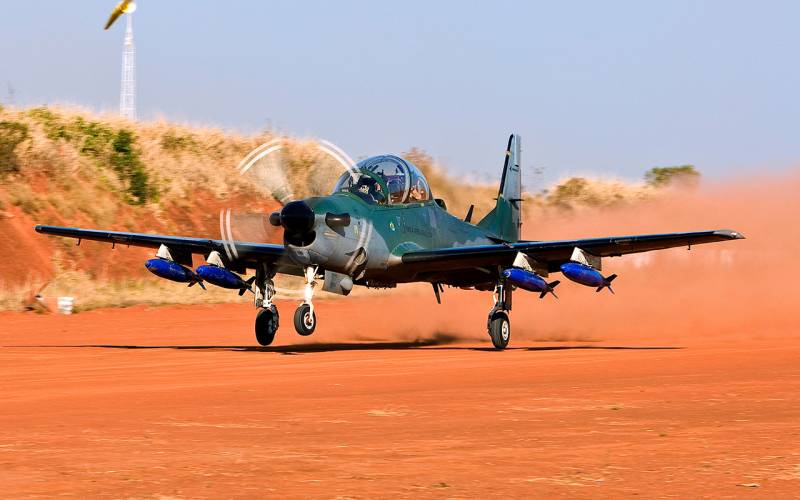 The EMB 314 Super Tucano light attack aircraft was actively used to fight partisans and drug mafia representatives in Colombia. Also in combat conditions, these attack aircraft were used by the Afghan Air Force. There is no information about lost attack aircraft in combat. In addition to the shock functions of the aircraft is often used for reconnaissance and observation of the terrain. For example, in Brazil, this attack aircraft actively participates in the Sistema de Vigilância da Amazônia (SIVAM) program, which is aimed at combating drug trafficking and illegal logging and burning forests in the Amazon jungle. 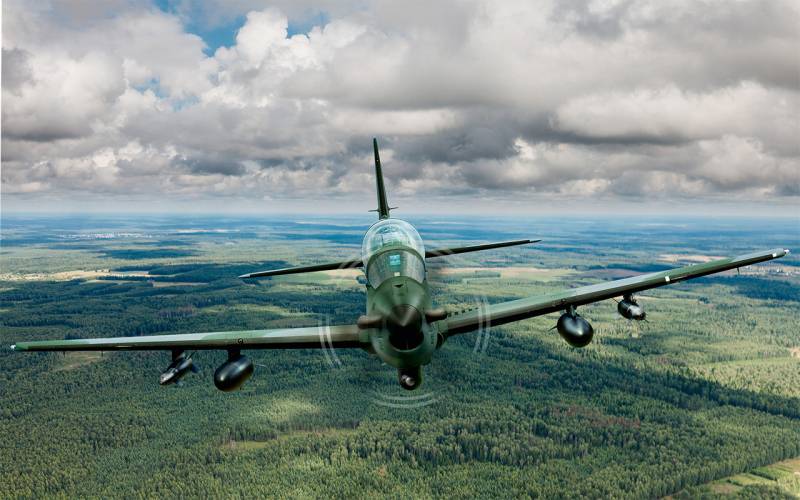 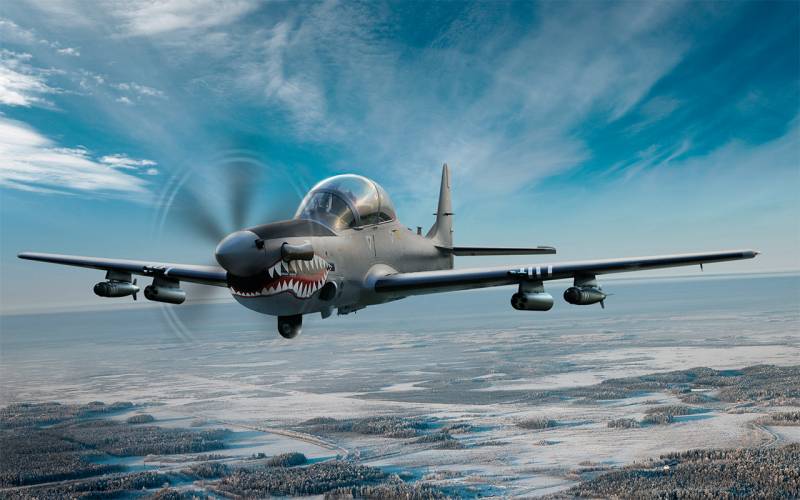 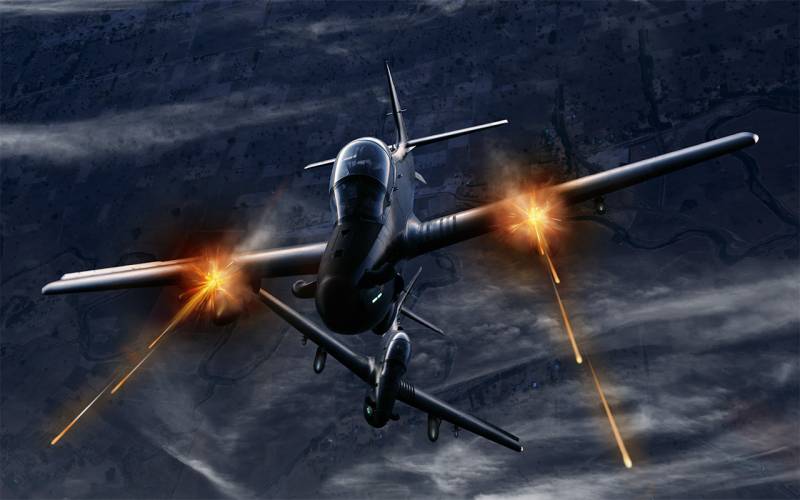 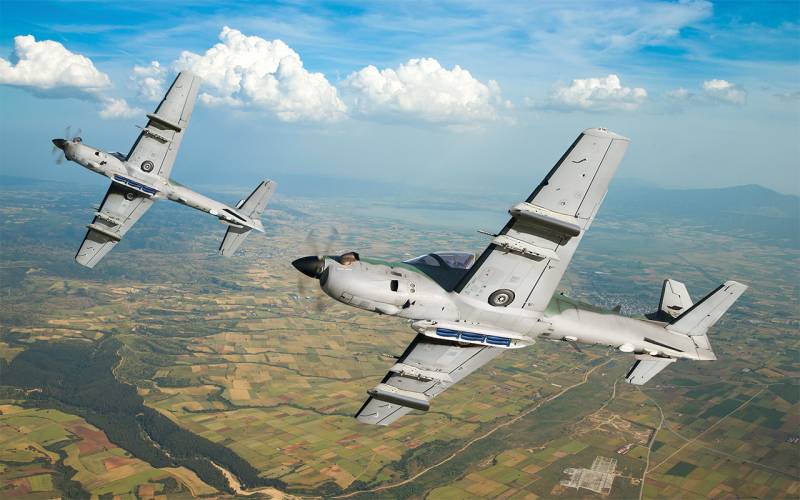 Ctrl Enter
Noticed oshЫbku Highlight text and press. Ctrl + Enter
We are
Announced the station of visual and optical interference "Grach"Embraer KC-390 military transport aircraft preparing for tests
145 comments
Information
Dear reader, to leave comments on the publication, you must to register.