January 30 2018
28
Vladimir Iosifovich Rdultovsky - one of the outstanding designers of the Russian Empire and the USSR, the creator of fuses, ammunition and explosive devices. Without exaggeration - it is a star of the first magnitude, and the world level. 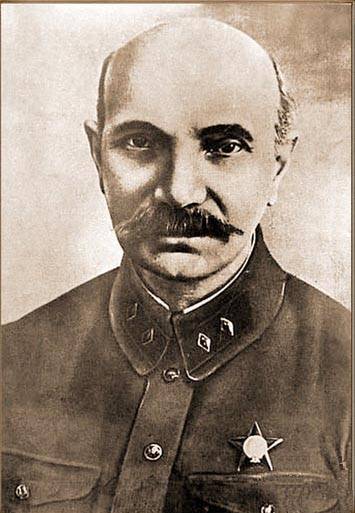 Vladimir Iosifovich was born in 1876 in Vladikavkaz - in the family of the captain of the Caucasian army who had served out of ordinary soldiers. His father died early (in 1888), and the son, out of respect for his father’s military merit, was accepted to the Voronezh Cadet Corps for public support, after which (in 1893) he entered the Mikhailovsky Artillery School. The Mikhailovsky Artillery School is a military educational institution that gave very serious special training. Graduates of the school noted that the contingent and the whole atmosphere of the school made an impression of a temple of science based on well-organized management and discipline, and widespread scientific (primarily mathematical) education led to the fact that its pets resembled scientists rather than frivolous junkers. V.I. Rdultovsky graduated from college in the first category (1896) and became an officer.

After production, he served for some time in the 2 of the East-Siberian artillery brigade, and then was accepted to the Mikhailovsky Artillery Academy. The Academy Lieutenant V.I. Rdultovsky graduated from 1902 in the city - also in the first category. And for the "excellent success in the sciences" was made in the captains.

After graduating from the Academy, V.I. Rdultovsky occupies a number of responsible positions related to the work of the Main Artillery Directorate, develops new types of artillery weapons, participates in the construction of military factories, organizes mass production of ammunition, which Russian artillery needed in World War I, and works in the artillery armament front supply bodies. By October 1917, Vladimir Iosifovich was in the position of the chief of supply of heavy artillery, and, without interrupting his work, he joined the Red Army and was confirmed in the same position.

Vladimir Iosifovich is actively involved in the work of rearming artillery of the Red Army, investing in this business all his knowledge and experience gained in the previous period. At the same time with the great design and research work, he teaches in a number of higher educational institutions. So, from 1926 to 1929. he read the Ammunition Course at the Artillery Academy, was a lecturer and permanent chairman of the State Examination Commission at the Military Mechanical Institute, and from 1932 until the end of his life read the Course of pipes and fuses at the Naval Academy. Divingener V.I. Rdultovsky worked in experimental and design bureaus, was the first director of the Trinity Equipment Factory.

For his fruitful activities aimed at improving weapons, the Imperial and Red armies Vladimir Iosifovich repeatedly awarded. In 1915, Colonel V.I. Rdultovsky was a knight of the Order of St. Vladimir of the 3 degree. In 1924, he was thanked the Revolutionary Military Council and was awarded a cash award for the excellent performance of the special task of the Government. In 1928, for his work he was awarded the title of Honored Worker of Science and Technology. In 1933, he was awarded the Order of the Red Star for developing weapons models, and in 1935, he was awarded a gold watch from the People's Commissar of Defense. In 1938, the government awarded him the XX Years of the Red Army medal for his many years of service in the Red Army.

The role of Vladimir Iosifovich in the development of artillery equipment in our country was very large.

The Russian field artillery entered the Russian-Japanese war 1904 - 1905, having only shrapnel in service - to which, due to a profound error, the universal properties of the "single projectile" were attributed. The very first months of the war revealed the unsatisfactory nature of such a primitive ammunition, and insistent demands on high-explosive grenades began to come from the front. Vladimir Iosifovich immediately responded to the needs of the army, designed the first 76-mm high-explosive grenade and organized its production in such a way - that already in 1905, it began to flow to the Far East. This circumstance is all the more remarkable that the issues of high-explosive grenade equipment with powerful explosives were not studied in Russia at that time, and the gross production of such projectiles was in its infancy during this period.

In 1906, Vladimir Iosifovich is sent abroad for five months, where he studies methods of loading high-explosive shells, the technology of making pyroxylin, nitroglycerin and cordite, extracts information about trinitrotoluene and tetryl that have just been adopted in Germany and brings explosives to Russia. From that time on, the first works on the equipment of high-explosive shells with TNT and the use of tetryl as a detonator in fuses began in Russia. In 1906 - 1908 Vladimir Iosifovich designed the 76-mm high-explosive grenade with TNT equipment, developed the technology of its equipment and personally organized the equipment of the first gross batches - this grenade was the basis of the ammunition for batteries armed with 76-mm cannons during the First World War and remained in service with the Red Army under the name of “old” high-explosive grenades. 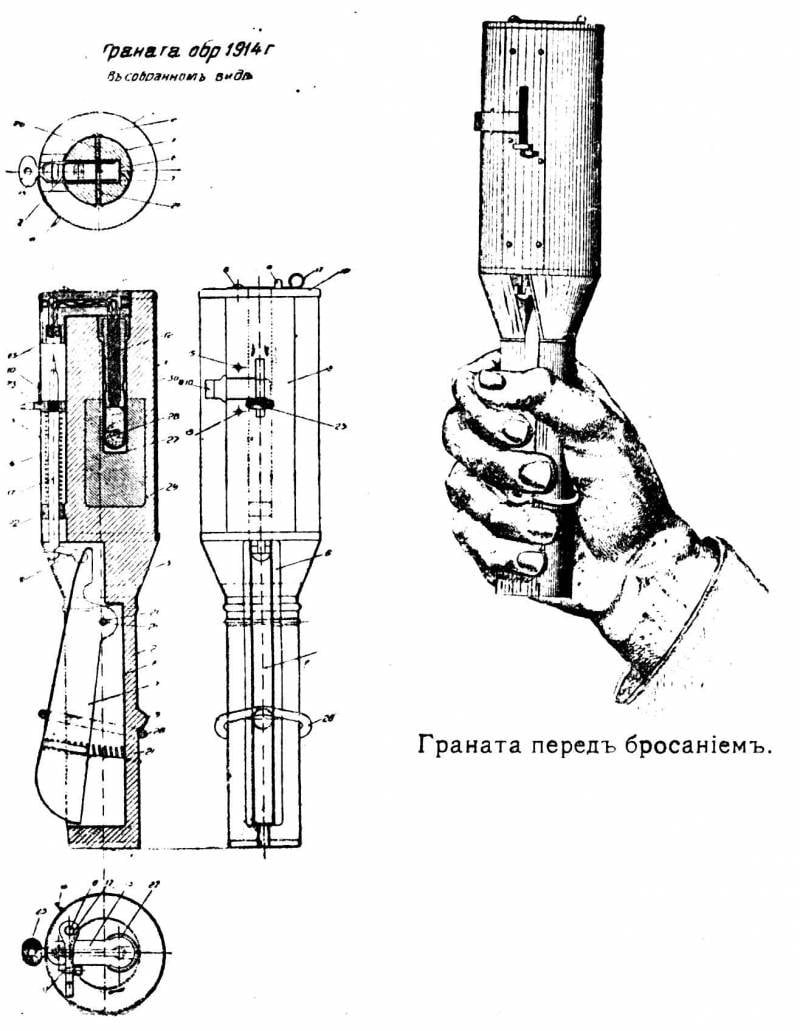 During the First World War, he also developed a number of remote fuses for anti-aircraft grenades, known under the brands of RD, RTZ, RTZ (UG), etc.

Vladimir Iosifovich played a great role in rearming artillery of the Red Army. Among the major works in this area, his projects of fragmentation projectile for small-caliber artillery, fuses WG-6 and their modifications should be particularly noted.

Along with the development of individual weapons, Vladimir Iosifovich paid much attention to the experimental selection of such important elements of the shot as pipe caps - creating samples that are widely used in various fuses. Rdultovsky - the founder of the theory of design of fuses. Vladimir Iosifovich personally carried out dangerous work with caps and fuses, risking his health more than once and often his life.

V.I. Rdultovsky developed a large number of samples and 80 draft designs, although not adopted, but served as markers for him and other designers on the way to choosing the most rational and perfect options.

A characteristic professional trait of Vladimir Iosifovich was to bring almost every project to gross parties and surrender them to the troops - which was of extremely important national importance for such an object as ammunition. In this respect, his work on the first high-explosive shells with TNT equipment, hand grenades and fuse samples is most indicative.

In addition to performing purely design and production tasks, Vladimir Iosifovich conducted a number of research projects. The works on determining the durability of explosives when fired and the factors affecting the sensitivity and speed of action of instantaneous fuses, on radial and axial detonation, on the selection of decelerations and a number of others have brought the greatest notoriety. Under the leadership of the famous artilleryman V.M. Trofimov, he took part in the development and testing of fusiform projectiles. 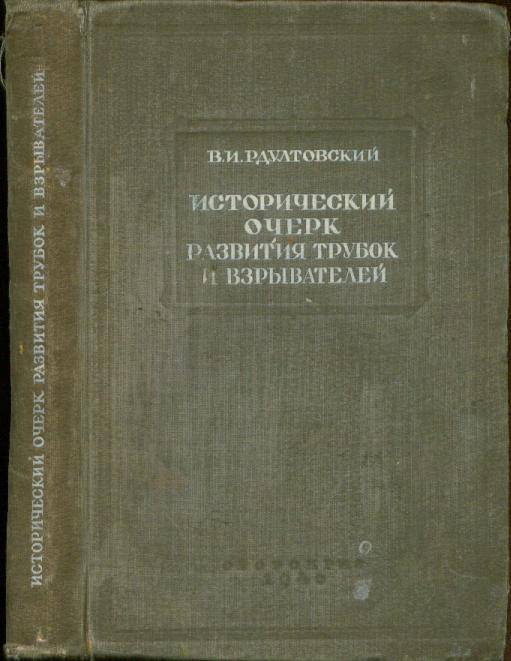 Throughout his life, Vladimir Iosifovich did not confine himself to the circle of issues of his specialty, being a widely educated engineer and a person of high culture and erudition. Until the last days of his tragically broken life (13 died on May 1939), he was interested in the history of wars, issues of tactics and strategy, skillfully linking them with issues of the development of military equipment.

After his death, there was a rich material - the fruit of vast experience in the development and production of ammunition.

Vladimir Iosifovich Pdultovsky, an ammunition specialist, designer and teacher, Honored Worker of Science and Technology, devoted thirty seven years of his life to developing the artillery combat capability of his Homeland - and inscribed in golden letters in its glorious history.