Russians in Germany. truth against myth

January 28 2018
44
In 1945, fighters came to Germany to see the disastrous consequences of the Nazi occupation. They made their way from the Volga to the Oder across the devastated land, constantly encountering destroyed cities, burned villages, corpses filled with wells.


In 8 km from the liberated Kerch, 245 children's corpses were found in the moat. Thus, the fate of the missing children, which the German commandant's office ordered parents to send to the school from where they did not return, became clear. Representatives of Western civilization buried them alive ...

Chad lover invaders did not suffer. Another confirmation of this is the letter received by the Red Army soldier Sidorov from his sisters Zina and Vera from the Smolensk region and published by the Red Star 9 of August 1942 of the year (No. 186 (5250) under the heading “Detericides”: “Kolya, it’s hard to write everything that we survived. The secretary of the village council, Valeu Ivanova, and her daughter Nina, the son Grisha, you know very well. The Hitlerite officers, wanting to get information about our partisans from her, decided to influence her by torturing her children.

Having tied her hands to Vale, these wild animals in her eyes cut off her right ears from Nina and Grisha, then the boy gouged out her left eye, the girl chopped off all five fingers on her right hand. Valya could not bear these wild tortures and died of a heartbreak. Fascist butchers tortured children to death were taken to the forest and thrown into the snow. We buried their corpses in the same grave with Valya.

The executioners also brutally acted with the girl teacher Maria Nikolaevna. Knowing that her husband was in a partisan detachment, the savages began to torment her daughter Vera. To a six-year-old girl, they pierced their palms, hands, ears with red-hot needles. Then, not having achieved anything from Maria Nikolaevna, they poisoned Vera. Maria Nikolaevna herself was subjected to inhuman torture. For 30 – 40 minutes, the German robbers forced her to stand barefoot in the snow, poured gasoline into her mouth, twisted her arms, and pricked her whole body. Dying from torture, Maria Nikolaevna did not say a single word about the partisans.

In the neighboring village of Maloye Petrovo, Hitler's cannibals forced all the adult working-age population to forced labor, and exterminated all children and old people. Having driven a 80 man into the barn, they poured gasoline over them and lit it. An hour later, only a pile of charred corpses remained in place. ”

The terrible picture was typical of the occupied territories of the USSR. But even amateurs cannot even blame the soldiers-liberators with Nazi thugs for accusing the Red Army men of such crimes.

War veteran poet David Samoilov argued that “the people of Germany could suffer even more if it were not for the Russian national character - gentleness, indecency, love of love, cordiality, lack of a sense of superiority, remnants of religious and internationalist consciousness in the thick mass of the soldiers. Germany in 45 was spared by the natural humanism of the Russian soldier ... "

The Soviet education also affected. The historian Anatoly Utkin in the book “World War II” rightly wrote: “It is impossible to imagine a Soviet teacher who would proclaim the organic superiority of the Soviet people over others. With any attitude to socialism, it is impossible to refute the fact that it did not proclaim national exclusivity, did not rank neighboring nations lower, did not appeal to the dark instincts of blood, did not give rise to arrogant arrogance. During the years of the desperate battle to save the country from the invading enemy in Russia, German thinkers and poets published it. Today, trying to equate the two polar value systems is possible only by betraying historical the truth in favor of the political malice of the day. "

As in any war, rape has occurred. They were also recorded in those areas of Germany, where the Americans, British and French entered.

The behavior of the allies of the American historian Charles MacDonald described as follows: “Robberies ranged from petty theft to theft of objects of exceptional value. Crimes such as desertion, misbehavior on the battlefield, murder, rape were also committed. When hostilities took on the nature of the pursuit of the enemy, the number of rapes sharply increased. ”

The most stringent measures against the rapists, including the execution, were applied by the Soviet command. Beevor lies, claiming that the Soviet fighters were not punished "for the very facts of the rape they committed. Punishments followed only when soldiers were infected from German women with a venereal disease. ”

A shock Germans really experienced. Here is the testimony of the Berliner Elizabeth Schmeer: ​​“On January 3 my son came on leave from the front. He served in the SS units. My son told me several times that the SS units in Russia did incredible things. If the Russians come here, they will not be “doused with rose oil”. It turned out quite differently: the defeated people, whose army caused so much misfortune to Russia, the winners give more food than the previous government gave us. It's hard for us to understand. Apparently, only Russians are capable of such humanism. ”

Life itself forced the Germans to change attitudes towards the Red Army.

And modern provocative "stuffing" about the fierce cruelty of the Red Army and "hundreds of thousands of raped German women" work on the myth promoted by the West about the equal responsibility of the USSR and Germany for initiating war and the crimes committed during it.

With the help of lies, the West expects to completely revise in its favor the geopolitical results of the Second World War. 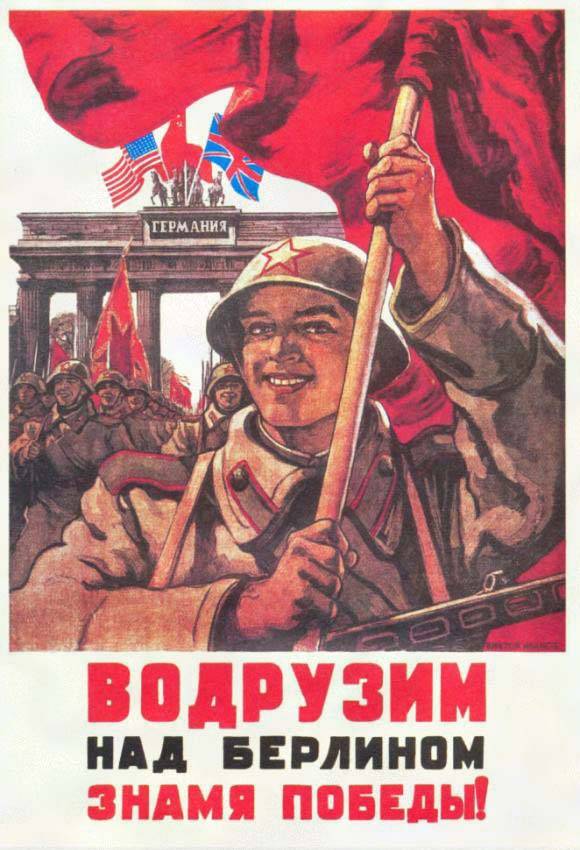 Ctrl Enter
Noticed oshЫbku Highlight text and press. Ctrl + Enter
We are
My grandfather's front-line letters (part 2)Myths of the Great Patriotic. Papier mache helmet
44 comments
Information
Dear reader, to leave comments on the publication, you must to register.