How has the world balance changed in seven years?

January 26 2018
21
When I wrote 2011 layouts for a year, the situation was largely undefined. And if the struggle for hegemony between the United States and China was predictable, then whose side would Russia choose is not yet clear. 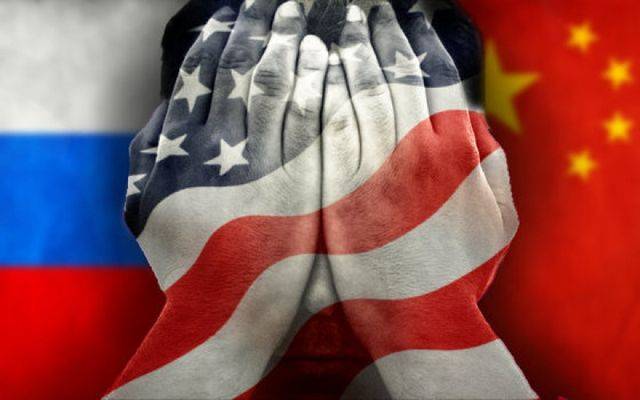 Yesterday, one person sent me a link to my own article from 2011 of the year, describing the main geopolitical contours and layouts, on the basis of which it is worthwhile to build your understanding of what is happening in global politics.

A good analyst is not ashamed to take up the archives of his publications and demonstrate his old achievements - because they are realistic. This is not Zhukovsky and Demur, who are forced to hysterically ban all those who ask them when to wait for the dollar for two hundred rubles.

The man accompanied the link with the words “It was from this article that I began to read you,” and asked if there would be a sequel.

In seven years, of course, a lot has happened. "Arab Spring", the overthrow and murder of Gaddafi, the coup in Ukraine and the civil war with those who did not agree to be slaves of the West for visa-free and cookies, the beginning and the turning point in the war in Syria and much more.

When I wrote 2011 layouts for a year, the situation was largely undefined. And if the struggle for hegemony between the United States and China was predictable, then whose side would Russia choose is not yet clear.

And I was very worried that the Americans would be tricky enough to bribe the Russian elites and slay Russia with China (they are still trying to make it ridiculous stuff about the Chinese seize the Far East). This would be the worst possible scenario. Apparently, the Kremlin also thought so.

In addition, the Americans, instead of bribing and co-opting the Russian elites into their system, tried to bend the Russians out of habit (as the living classic said, cowboys). And it doesn't work with Russians.

And the Russians went to rapprochement with China (and I exhaled with relief, because the rule “the Englishwoman harms” never deceives). Well, the Anglo-Saxons have neither friends nor allies (the “Unthinkable” plan clearly confirms this).

In response, the United States staged a coup in Ukraine. They already planned it, but a year later (there is a huge amount of evidence), and here they had to accelerate. The result was a false start, the Crimea went to Russia, and the LDNR was tied up by all the forces of the American Reich Commissariat "Ukraine".

Washington’s attempt to make peace with Iran has failed. The short period of "warming relations" was quickly replaced by the resumption of hostile rhetoric.

Suppressing the rebellion against US hegemony in Venezuela with the help of another Maidan failed (including thanks to Russian and Chinese aid).

In Syria, American plans to create a Caliphate (long voiced by a number of Western analysts) and leaks from the CIA and other intelligence agencies also failed. And now the destroyed “Islamic state” cannot be used either against Iran or against Russia.

Judging by recent events, the Kurdish card Americans also fail to fully play (that is, a certain amount of instability will still be sown, but no "Great Kurdistan" from the Pentagon cards and from the calculations of "StratFor" will not work).

I am already silent about the titanic efforts of the Obama administration to build a “belt of hostility” around China, which naturally turned into full agony.

Again, the attempt to provoke Russia into an open military conflict with Ukraine failed. If this happened in the 2014 year, then the Americans would be able to create a broad military coalition from NATO countries.

And now, not only Poroshenko’s regime has completely discredited itself and is deadly sick of everyone (now the Kiev regime says it can “break off relations with the IMF”), but there is no agreement in NATO itself.

Contradictions of interests of the EU and the USA regularly generate new conflicts. And Turkey, which just a few years ago was not against participating in a showdown with Russia (at least indirectly, through its proxies in the form of Gray Wolves and all Tahrir), licked at least to the Crimea, after the American coup attempt and their support of Kurdish separatists reached a confrontation with the United States to the stage at which it closes American bases on its territory, purchases Russian air defense systems and bombes the American airfield Minnig.

More recently, the seemingly monolithic Western coalition is falling apart before it has entered into battle. And this is largely the result of both the Kremlin’s wait-and-see policy and the completely idiotic strategic and tactical mistakes of the Americans themselves. As well as the brilliant successes of Russian diplomacy, which fully managed to take advantage of these mistakes (although at times it was possible to squeeze harder).

This is also accompanied by a split within the United States itself, which, a year after Trump’s election, not only does not think to calm down, but also becomes stronger and more insidious (and the more irrational the conflict, the harder it is to extinguish it).

It is also worth adding an appeal to the Russians to the chief editor of the largest Chinese edition of the Global Times, in which he says that Russia and China need to accept a reality in which it is impossible to come to an agreement with the United States. And Xi Jinping appeals to the PLA, where he calls on the Chinese army to be as ready as possible to repel foreign (read "American") aggression.

So in the likely future confrontation there will be no “lonely Russia against a consolidated West”, as they dreamed of in Washington a few years ago. And "the weakening and fragmented US against the union of China, Russia and Iran" (and maybe Turkey, the question of which, as Moltke said, "three divisions").

Although the most preferable (and one of the most likely) options is to further weaken the US economy, the dollar loses its status as a global reserve currency (not for one day, of course) and the US is sliding into a civil war. The first scenario of the future of the United States from the "California trilogy," Kim Stanley Robinson.

No one has yet succeeded in deceiving the cycles of hegemony (as described by Immanuel Wallerstein), and I have no doubt that Washington will not succeed in this either.

PS It will be interesting to raise this text after another seven years to see to what extent I am right in my calculations and forecasts.

Ctrl Enter
Noticed oshЫbku Highlight text and press. Ctrl + Enter
We are
A great interview with Sergey Lavrov: about Ukraine, Obama and IranWhat you didn't want to know about England
21 comment
Information
Dear reader, to leave comments on the publication, you must to register.