Slaves - a pillar of democracy

February 1 2018
87
A lot of testimonies of those who happened to live in the classical period of ancient stories, and these people (highly educated for the most part) considered him a perfect time. And are they wrong? Temples were erected on the Acropolis, sculptors sculpted marvelous statues of amazing perfection, and scholars made great discoveries. At the same time, the ancient Athenians founded a democracy, a completely new, more progressive system of governing society, than the monarchy. But what was the basis of Athenian democracy? What was its economic basis? This will be our story. 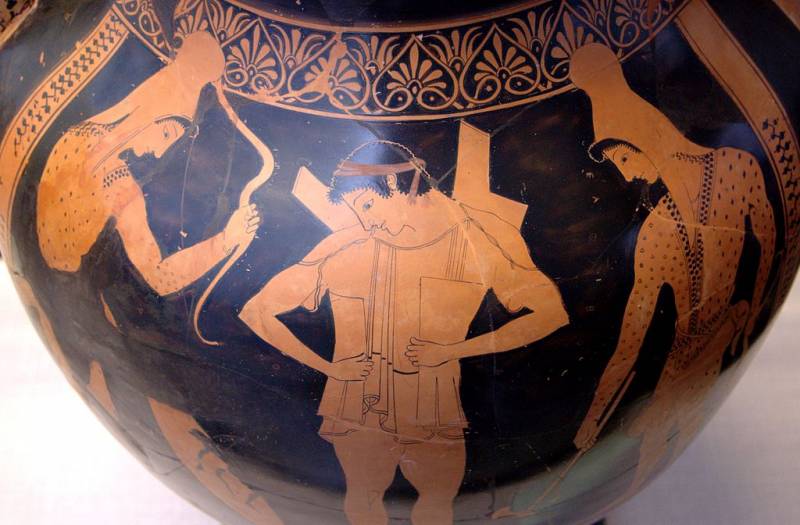 Even freed, the Athenian slaves had no right to serve in the army. At best, they could be rowers on triremes. Hoplite could only be a citizen. The image of the hoplite putting on the armor on the side “A” of the red-figure amphora. 510 — 500 BC er (State Antique Collection. Munich)

Democracy for the elect

First of all, democracy in Athens did not exist for everyone, but only for the elect. For example, slaves, of whom there were a great many, had absolutely no political rights, however, Athenian women also. Foreigners, the Athenians called them Meteks, who lived and worked in Athens, were not considered citizens, and therefore also did not have the right to vote. Scientists have calculated that only 30 000 citizens of Athens from the three hundred thousand population of the city (and this is only ten percent), could take part in the political governance of the state.

When in 447g. BC. Pericles voiced the idea of ​​restoring the temples on the Acropolis (the Persians without mercy destroyed the sanctuaries of the Athenians). So almost all the work of recreating them fell on the slaves.

It is curious that Xenophon, the Greek historian, in one of his writings once remarked that in a perfect family a man is obliged to sleep with his spouse, and not a slave. He was extremely negative about the fact that the rebel slaves had children, because he believed that the offspring of slaves would be much worse than their ancestors.

The cares of the owners - on the slave shoulders

The true power of the people in Athens did not exist until the time when in 507 BC did not carry out reforms of Klisfen He divided the local population not according to wealth or position, but exclusively “by place of residence”. And something similar to our modern constituencies came out. Important decisions taken on issues of domestic and foreign policy were taken by Ecclesia or the general meeting of citizens, convened forty times a year. According to the meeting, for the adoption of legal decisions on cases of public administration required the presence of six thousand citizens.

In addition to the meetings of citizens, there were many diverse councils and meetings that collegially made decisions on problems of justice and law, as well as resolved issues of command and control, fleet, ecclesiastical institutions and other equally important components of Athenian society. It is known, for example, that only the Trial Chamber (Dicasterium) held meetings two hundred times a year.

In Athens, any resident could participate in public administration. However, the one who took part in the case of truly national importance, and then also did homework, carried a rather heavy burden: it was extremely difficult to combine both cases. It was possible to solve the problem in a very simple way - to “buy” more slaves and ... let them do housework for the owner! That is why in Athens the children of slaves, growing up, became slaves, and even if the slave owner himself was their father, this did not save the children from slavery. Fortunately, it was not accepted to slave for debts in Athens, since the reforms of Solon in 594 BC. it was canceled. Solon forbade the sale of indigenous citizens for the debts of slavery. For the citizens themselves, this was a great relief.

The Greeks thought of themselves as a cultural nation thanks to the fortunate location of their state, which the Mediterranean and Black Sea reliably guarded against barbarians. The Greeks perfectly understood their advantage among other states of the Mediterranean and Black Seas. But there was a commodity that was extremely necessary for the Greeks - slaves. Actually, the demand for slave labor was a stimulus to the formation of colonies. Because of them, then there were wars, expeditions were equipped, or it was a peaceful trade aimed at buying slaves.

The slaves either bought, or there was an exchange for cloth or wine, for those goods, acquiring which, the owner joined the cultural life. Wealth, exported from Greece, were acquired by local nobility. She never hesitated to sell the poor Athenians into slavery to the Greeks, just to find the desired goods and drinks. The fate of the “foreign slaves” sold outside of Greece was sad: they, as a rule, were assigned the lowest place in the slave hierarchy, and their work was not the easiest - silver mining in the mines of Lavrion. They worked at the mine in 483 BC, and since coins were made of mined silver in Greece, silver became the basis for the strong economy of Athens!

The luxury of Athens and child labor

Yes, the wealth of Athens was mainly formed on silver, which was mined by slaves in the mines of Lavrion, located approximately forty kilometers from the city. Ancient historians believed that men were miners there, but current historians believe that they used child labor everywhere. And since children are smaller, they were free to move along narrow tunnels of mines.

During the excavations near the mines, scientists seem to have confirmed this assumption. Finds in the graves and letters on the stones confirmed that in one of the five cases they had child skeletons. Alternatively, it can be assumed that the slaves lived at the mines with their families, and children's graves ... Well, death does not spare children. And yet, even large child mortality cannot explain such a number of children's graves, and even the children in the Lavrio graves were much older than those buried in other places where there were no graves of slaves. Scientists find this a serious proof that children were actually used in the mines, and died from overwork. Contemporaries reached Greek vases depicting the labor scenes of the miners of Lavrion, and very large ones are depicted next to the large figures, and it looks like they are children! So, all these amazing sculptures, wonderful ceramics, magnificent Parthenon architecture - all this was paid for by the hard work of children-miners, children of slaves.

Every Athenian family - according to the slave!

A great many Athenian families owned slaves. The poorest citizens also had at least one slave. Such a considerable demand for slaves could not satisfy either the influx of prisoners of war, nor the large birth rate in the families of slaves, because the townspeople acquired them in the slave market. Price varied according to age, gender, and health. The most expensive slaves were ranked in one talent, which is equivalent to 6000 drachmas. In the bulk, slaves were cheaper, however, their price did not fall less than 200 drachmas (for reference: the attic silver dram weighed 4,32 g of silver), and the price for children was much lower.

In the markets "slave goods" was exhibited as cattle. Often, male slaves were set completely undressed on the podium, so that buyers could see them from all sides. The slave was forced to perform several exercises, this made it possible to identify physical defects, if any. If the slave concealed flaws and the buyer discovered this, then the transaction could be invalidated.

Back in Athens there was a rule: if a slave died at the hands of the master, then the master should be deprived of life. The Athenians believed that otherwise the gods could be angry not only at the murderer, but also at all the inhabitants of the state. In all other respects, the master was free to do whatever he pleased with his own slaves.

Sometimes riots broke out among the slaves, sometimes they tried to escape. Caught waiting cruel spanking. However, bringing slaves from all sorts of places, the master risked much less. After all, the possibility that the slaves conspired and revolted was almost close to zero, because they spoke in different languages, therefore, did not understand each other! For example, in 414 BC, in one of the thirty-five registries found there, the twelve slaves recorded there were from different districts.

Freedom to the oppressed!

Alas, most of the slaves found death in captivity, but slavery in Athens was not always life-long. Slaves could count on liberation from slavery, if only the master would be so merciful. Or in old age, when, due to his age and infirmity, the slave could no longer work for his master all day long. And this happened only when the owner himself was already close to death.

Slaves-artisans had a greater chance, compared to other slaves, to gain the desired freedom. They could save a certain amount of money, and thus buy their freedom. Such actions were often considered unlawful, and therefore the slave was obliged to argue his right to redeem freedom. The cost of going to court was very high. To pay, an amount equal to five incomes of a slave was required. However, such expenses were worth it, because the fact of the release of a slave must be recorded. In addition, slaves had the right to assist each other in acquiring freedom through eranos. Then there was this type of lending. It was a kind of association in which slaves could keep their money, and then, as needed, take it. Freedom slaves often continued to contribute their share in eranos, thus helping materially to all those who wanted long-awaited freedom.

Ctrl Enter
Noticed a mistake Highlight text and press. Ctrl + Enter
We are
Chernobyl notebook. Part of 3Father told
87 comments
Information
Dear reader, to leave comments on the publication, you must to register.