Russian Olympians clamped down, and in the Kremlin "deeply" regret

January 26 2018
218
The International Olympic Committee does not allow famous Russian athletes to the Winter Olympics. We are talking about those who are not involved in doping scandals. While Moscow "deeply regrets", the West continues to bend the anti-Russian line. If Moscow went to a boycott of games, the West would have been fools: there would be nobody to let go! 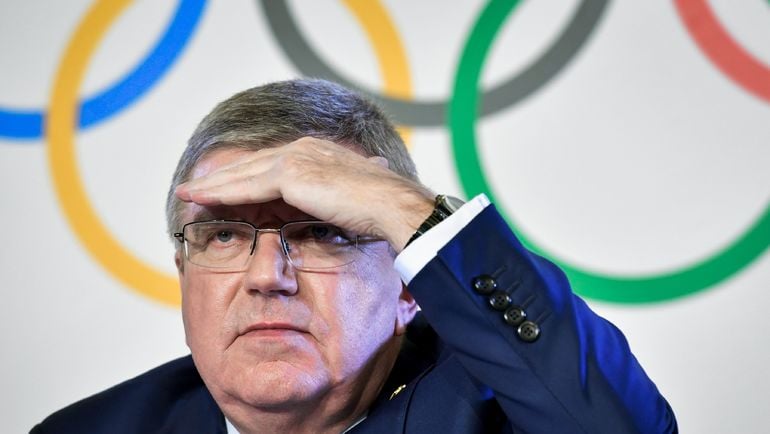 “The shock for Russia” (“Schock für Russland”) was the current decision of the IOC: no famous Russian athletes who are not involved in doping scandals are expected at the Winter Olympics. Moscow is shocked. "Shock" hit the pages of the world press - this is written in the major Western media.

How popular German daily edition tells «Handelsblatt», a large list of Russian athletes (five hundred people), whom the Independent Organization for Anti-Doping Testing (ITA) included in the list of invitees from the very beginning, has already lost weight on 111 names. The publication believes that the exclusion of the leading athletes from the list means a "heavy blow" for Russia.

The so-called list of “preliminary invitations” of the International Olympic Committee lacks three bright stars of Russian and world sports, which have never been banned from participating in games due to doping scandals, the German edition writes.

Russian winter sports stars - biathlete Anton Shipulin, short trekist Viktor An and skier Sergey Ustyugov - did not make it into the list of those invited to Pyeongchang for starting games. Russia protested and demanded explanations, which the IOC in a specific form has so far refused to give.

The reason for the exclusion of names from the list was the December decision, according to which the Olympic Committee of Russia was “blocked” because of the doping scandal at the Olympic Games in Sochi: the doping was allegedly organized by the state. And only "crystal clear" Russian athletes can participate in competitions in South Korea - under a neutral flag and without a national anthem.

Now the Independent Anti-Doping Testing Organization continues to “work” on a list of previously invited Russian athletes. And already 111 athletes are excluded from the list. Initially, the list included 500 athletes.

In the Russian sport and in the power of this news caused a real stir. “We deeply regret in this regard, if such decisions are really made,” the Kremlin spokesman Dmitry Peskov commented on the explosive situation. The question should be clarified from the IOC, he said.

Also, Handelsblatt reports that Stanislav Pozdnyakov, Vice-President of the Russian Olympic Committee, rejected the idea of ​​a boycott of the current games. “This will not be a boycott,” he told Interfax.

At the same time, the exclusion of sports stars from the list is “a heavy blow for Russia,” further writes. And leads the arguments.

Shipulin, winner of the Winter Olympic Games in Sochi (2014), captain of Russian biathletes, is known precisely as a critic of the use of doping in sports.

Naturalized An is a true short track legend: he has six Olympic victories.

And these three have never been involved in the use of doping. “Many of the samples that they passed during their careers prove that they are pure athletes,” noted Pozdnyakov.

In addition, there are no other Russian stars on the lists: for example, Olympic champion in figure skating Ksenia Stolbova and Ivan Bukin (ice dancing).

At the same time, the IOC refused to comment on individual cases of delisting - ostensibly to “protect the rights of those concerned.” The list is intended to provide an invitation to exceptionally clean athletes. The IOC made it clear that new investigations and anti-doping tests could be initiated. They will be assigned to "a variety of athletes." Indeed, it was only in December that it became known that the World Anti-Doping Agency (WADA) obtained data on doping from the Moscow laboratory for 2012 — 2015 years.

The German edition also reports on the division of "suspicious Russian athletes" into two categories.

First: the IOC believes that the fact of doping has been proven. And in this regard, 42 lifelong Olympic ban. Currently, cases are being reviewed by the Sports Arbitration Court.

Second, no doping was detected, but there are indications that the samples were "processed". And such and such suspicions may relate to those mentioned by Ana and Shipulina. This, at least, was reported by the French newspaper Le Monde, citing information obtained directly from the investigators.

On Saturday this week, the IOC intends to make a final decision on invitations to the games in South Korea.

As for the opinions of Russian sports leaders, for example, Alexei Kravtsov, president of the Russian Skating Union, a member of the executive committee of the Russian Olympic Committee, believes that the exception of Viktor An is a glaring injustice directed “against Russian athletes over the past three months”.

“Russian Koreans cannot go to Korea,” the Russian newspaper Sport-Express mocks the behavior of the proponents with sadness.

Among the others excluded are bobsleigh, hockey, snowboard and many other Russian athletes. Chairman of the State Duma Committee on Physical Education, Sport, Tourism and Youth Affairs, Mikhail Degtyarev, believes that the attacks on sports are directed in Washington. Their goal is to provoke the Kremlin to announce a boycott to the Olympics in Pyeongchang.

A specific response from the IOC could not be reached and the Russian media. For example, RBC I tried to clarify the situation with short-tracker Ahn, but the IOC did not comment on reports about the non-admission of the six-time Olympic champion before participating in the games. The IOC press service gave the following response to the agency: “To protect the rights of individuals within the framework of the process [at the invitation of athletes from the Russian team at the Olympics], the IOC cannot comment on the information on each of the individuals, but will send a list of invitees whenever possible.”

Messages in the media about the possible removal of Viktor Ana excited not only Russia, but also Korean fans. The South Korean press is also "in shock." The fact is that An can be said to be a national hero: after all, he brought the country three gold medals at the Olympics in Turin (then was unfairly dismissed due to injury and proved his skill and willpower under the Russian flag).

And, as it should be, some commentators on the web are outraged by the exclusion of Ana from the list, others approve of this exclusion.

“It smacks of some inconsistencies. There are only 17 days left, and if he couldn’t go, didn’t they know about it beforehand? ”The website quotes sm10 from the Naver Sports portal RIA News".

“I hope this is not true. I want to see him in Pyeongchang, ”wrote another user, under the nickname DoubleU.

Along with this, a version is being circulated that this athlete could violate anti-doping rules while in the Russian national team. Opponents of the sports star already scoff at An, who has replaced citizenship. “And rightfully this Russians, if we recall that their federations worked in Sochi. Viktor An is not a Korean athlete, so it does not matter whether he will participate or not, ”the user writes under the nickname Irisam. Another nickname, someone JasonBourne, generally called Russia a “doping country”:

“These Russians are hopeless. Not only Viktor An, but many other athletes will not go, so this is quite in the spirit of the doping countries of Russia. Is it normal for 33 medals received at the Olympics to cancel 11 medals due to doping? In their country, not only the referees are bribed, but they are also pumped up with doping. It is necessary (them) to be forever removed from the Olympics. ”

There is an opinion in Russia that Russian officials are to blame for the problems of Russian athletes. And the government itself.

Lyudmila Velikova, Honored Trainer of Russia (Ksenia Stolbova and Fyodor Klimov among the students), said "Free Press"that "the whole problem with the admission to the Olympics-2018 appeared due to the fact that our government did not protect us." “Initially, I missed the situation out of control, and when I realized it was too late,” she added.

With the fact that the officials are to blame here, the two-time Olympic champion in biathlon Anatoly Alyabyev agrees.

“How was it possible to sit and wait idly on the anti-Russian decisions of the IOC? Wait and ... do nothing to remove all these wild suspicions with scratched tubes from the guys? From the very beginning it was clear that the IOC was faced with the task of removing 80% of Russians. In general, I cease to understand the principle on which our officials are appointed - non-resistance to evil, or what? Immediately, the very first charges had to be answered sharply, snap, bite. And what are they? Apologized ... "

As for the current games, then, according to the athlete, such games are “to hell!” Alyabyev admits that he should have acted according to the 1984 scenario of the year when the Soviet government decided to boycott the games in Los Angeles: “Yes, they did not succumb to provocations . So it was necessary to act now. It is a pity that President Putin himself withdrew from this problem. I think he should have intervened. Then today they would not cry through the lists. ”

The situation, we add, is clear as day: Russia will be humiliated at any occasion and in any possible way. Do not forget that big sport has long become a big policy. The worldwide popularity of the Olympic Games leads to the fact that they also become political games. And if so, then Russia is still waiting for sanctions, sanctions and more sanctions.

The “deep regret” of Russian officials about the list being shattered is indeed puzzling and the realization that the current Russia on the world stage is far from being a giant of the USSR.

Today there is an obvious political game of exhaustion of those Russian teams that were previously allowed to play in South Korea. To snatch from the ranks of the participants of the strongest athletes. Everything is done to ensure that even those who perform without a hymn and under a neutral flag do not win significant victories. And everything is being done to finally consolidate the image of Russia as a “doping country”.

Observed and commented on Oleg Chuvakin
- especially for topwar.ru
Ctrl Enter
Noticed oshЫbku Highlight text and press. Ctrl + Enter
We are
Russian sport "in neutral status", or WADA against RUSADAOlympics without Russians? Not interested!
Military Reviewin Yandex News
Military Reviewin Google News
218 comments
Information
Dear reader, to leave comments on the publication, you must sign in.