Putin announced the adoption of a new weapons program 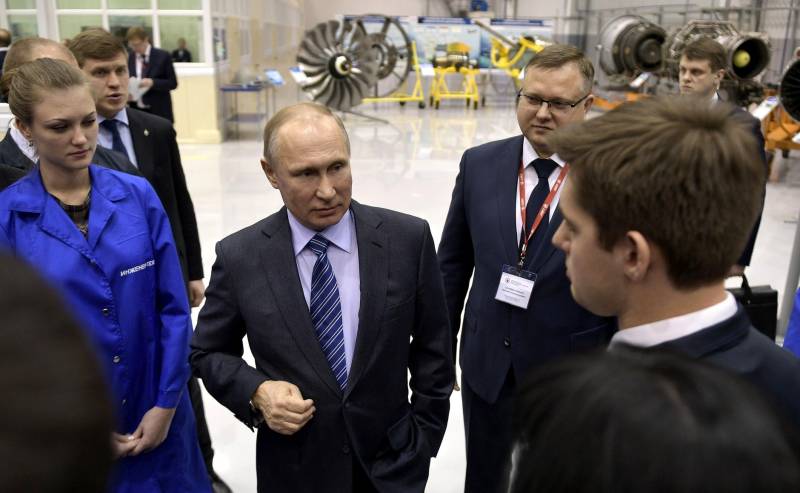 We accept, we have already adopted a weapons program and a state (defense) order until 2027,
the president said during a visit to PJSC United Engine-Building Corporation - Ufa Engine-Building Production Association.

Putin said that the defense industry in these years will work "stably and rhythmically."

At the final board of the Russian Defense Ministry at the end of 2017, the Russian leader stated that special emphasis in the state registration program would be made on equipping troops with “high-precision weapons air, land and sea-based, unmanned strike complexes, as well as personal equipment of military personnel, the latest intelligence systems, communications and electronic warfare. "

The Deputy Minister of Defense of the Russian Federation, Yury Borisov, earlier stated that Russia could create fundamentally new weapons in the middle of the next decade.

I think that the future program period will be characterized by the introduction of fundamentally new types and systems of weapons. The hardships gained in this direction by the leading defense industry enterprises make it possible to expect that by the 2025-2026 years there will be completely new types of weapons that will make major changes in the strategy and tactics of warfare,
said Borisov.

We will start the creation of a new generation aircraft carrier in the second programming period of the SAP,
said the deputy commander-in-chief of the Navy, Viktor Bursuk.

In addition, the Russian fleet is planning to receive two helicopter carriers before 2025, they can be equipped with the latest Ka-52K Katran helicopters.