January 26 2018
16
Alpha Jet - lightweight jet attack aircraft and training aircraft, which became a joint development of the German aviation Dornier and the French concern Dassault-Breguet, also known as the Dassault / Dornier Alpha Jet. The plane was created in the early 1970s, but despite its age it is still in service with the air forces of many countries and is widely used by them. During production from 1973 to 1990, 480 Alpha Jet aircraft of all modifications were built.


At the end of 1969, an agreement was reached between the Federal Republic of Germany and France to work together on a new lightweight shock twin-engine subsonic combat aircraft. It was originally planned that the new aircraft can be used as a training and light attack aircraft. The development was carried out by engineers in both countries based on the Dornier P.375 and Breguet Br.126 projects, the new light attack aircraft was called the Alpha Jet. According to the original plans, each of the participating countries of the project planned to build such aircraft on 200. The construction of the aircraft was to be carried out in two countries on the basis of the factories of the Dassault and Dornier companies, respectively. Initially, the American General Electric J85 engines, which proved themselves very well on the F-5 fighter and training aircraft T-38, were going to install a light attack aircraft, but the French managed to insist on installing their own Larzac 04-C6 engines, which developed 1350 kg traction. To eliminate the destruction of the aircraft by a single anti-aircraft missile or projectile attack aircraft engines smashed as far as possible along its sides.

Requirements for light attack aircraft Alpha Jet and its tactical and technical characteristics were developed, based on the characteristics of the alleged hostilities in the European theater of operations. At that time in Europe there was a huge number of Soviet armored vehicles, as well as a powerful system of military air defense, saturated, including self-propelled anti-aircraft artillery systems and mobile short-range medium-range air defense systems. The attack plane was planned to be used in combat operations characterized by transience, dynamism, massive use of various types of armored vehicles, the need for constant struggle with enemy landings and blocking the approach of its reserves. 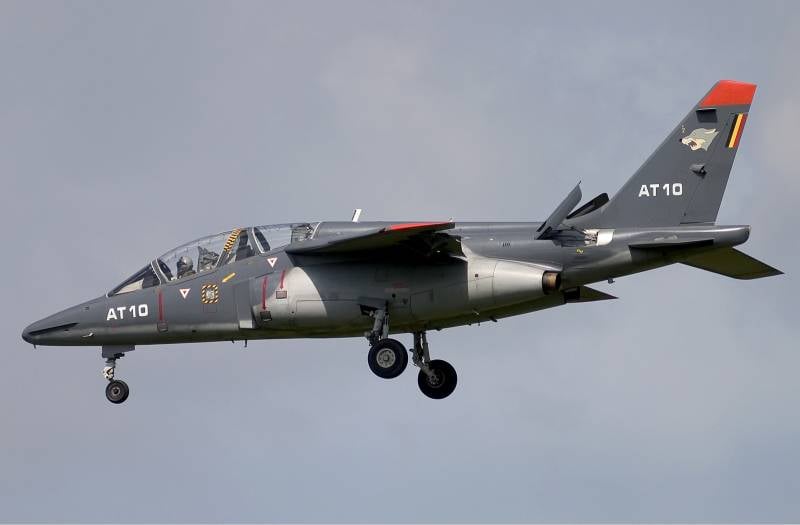 Alpha Jet 1B Belgian Air Force
The first flight of the Alpha Jet made 26 on October 1973, four years later, the aircraft began to enter service with the French Air Force, and some time later the German Air Force. During an extensive testing system, it was found that in 600 cases of sticking an Alpha Jet into a spin, both during normal and inverted flight, its control remained quite effective, and when the pilot removed the effort from the pedals and control knobs, the aircraft independently left the spin . When flying with the landing gear retracted and flaps, the plane went into a tailspin at a speed of about 185 km / h. With the engines running, a stall warning (manifested in a perceptible shaking) occurred at the angle of attack of 15 degrees, and the stalling occurred when the angle of attack of 18 degrees was reached. The minimum practical speed of a light attack aircraft with landing gear and flaps was only 157 km / h.

The first production training aircraft Alpha Jet E began to enter service with the French squadrons in December 1977, and the serial light attack aircraft Alpha Jet A began to appear in the Luftwaffe half a year later. As part of the German Air Force, the aircraft replaced the Fiat G-91 fighter-bomber, and in the French Air Force they were designed to replace the outdated CM-170 and Lockheed training aircraft T-33.

It is quite obvious that the aircraft intended for use in the French and German Air Forces had significant differences in the composition of the avionics and weapons. The French initially relied on using a new two-seat subsonic jet plane as a simple training machine. The Germans, in turn, were interested in obtaining a light attack aircraft, which could be used to combat enemy armored vehicles. In this regard, the German machines received a more advanced aiming-navigation complex. Total German Air Force ordered 175 attack aircraft, the French Air Force - 176 aircraft. In addition, the 33 aircraft in the version of the Alpha Jet 1В, very similar in composition to the onboard electronic equipment to the French Alpha Jet E, was built specifically for the Belgian Air Force. 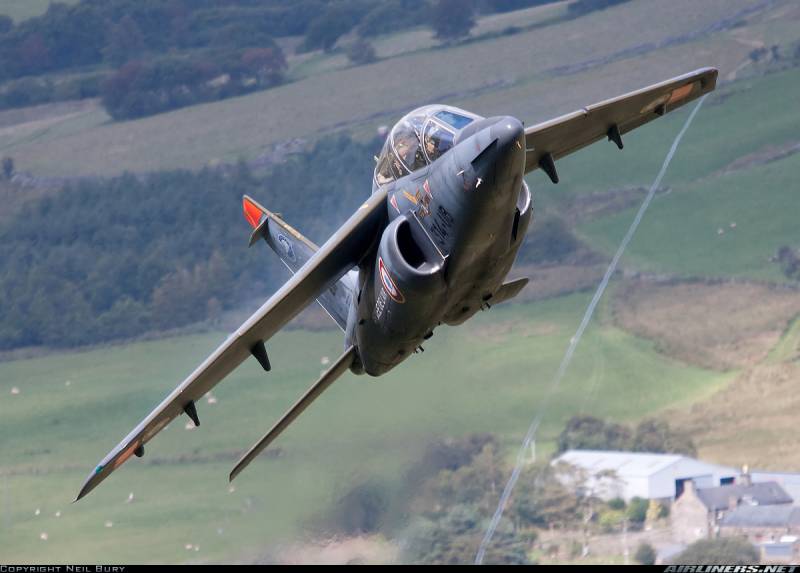 Alpha Jet E French Air Force
The Alpha Jet light attack aircraft had one specific advantage: the aircraft could fly at significantly lower speeds than the F-5E, Mirage-3E, A-104C, F-15, F-18 aircraft, for which such a flight was simply unavailable . This advantage allowed the crew of the Alpha Jet to evade attacks from supersonic enemy fighters. According to the characteristics of the angular speed, turn, turning radius in the horizontal plane, the light attack aircraft markedly surpassed other representatives of combat tactical aviation of NATO countries, including the American attack aircraft A-10, which was specially designed for direct air support of ground forces on the battlefield. And with the decrease in flight speed, these advantages of the Alpha Jet attack aircraft only increased.

At the same time, like all subsonic jet planes, which are characterized by relatively small thrust-to-weight ratio, the Alpha Jet was significantly inferior to supersonic combat vehicles in climb. In order to reach the height of 9150 meters from the moment of separation from the airfield strip, it took him about 7 minutes. Taking into account the flight characteristics of a light attack aircraft, its main means of protection against attacks by enemy fighter aircraft were: a small turning radius in the horizontal plane, the use of extremely small flight altitudes and the possibility of a wide flight speed maneuver.

The presence of a reliable and simple duplicate hydraulic control system provided the attack aircraft with very good piloting in all speed ranges and flight altitudes. Given the specificity of the use of Alpha Jet and frequent flights at low altitudes in the zone of increased turbulence, the safety margin of the light attack aircraft design was very significant. The maximum design overload was for it from + 12 to -6 units. During the test flights, the pilots repeatedly dived out at supersonic flight speeds, while the machine maintained adequate control, without showing a tendency to dive into diving or turning over. At the same time, in the combat units, the maximum speed of the aircraft without load on the external sling was limited to 930 km / h. At the same time, the maneuverable characteristics of a light attack aircraft allowed him to conduct air combat with enemy helicopters and left a chance in battle with the fighters that were in service with NATO at the turn of the 1970-80-s. 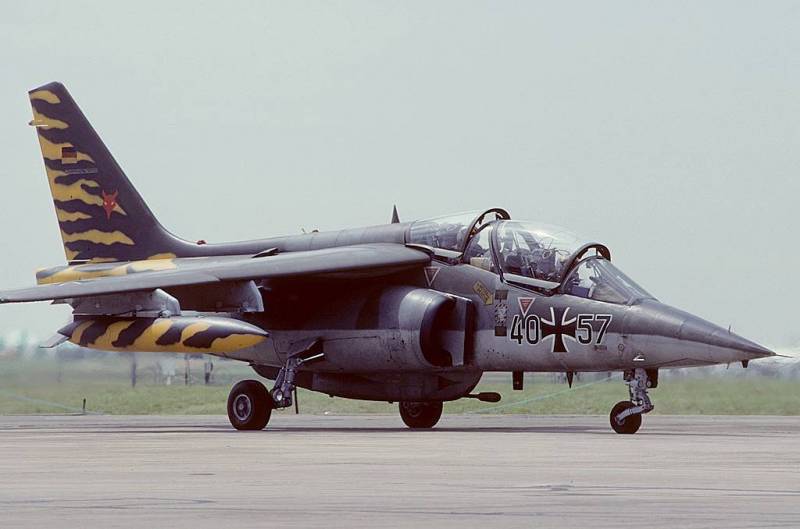 Alpha Jet A German Air Force
To overcome the developed enemy air defense system, the crews of Alpha Jet A light attack aircraft were advised to fly at low altitudes with abrupt anti-missile and anti-aircraft maneuvers that were sharp in direction and speed. To protect the aircraft, the crew could use passive and active EW facilities that could be installed in outboard containers before making a combat departure. According to the reviews of military pilots who had the opportunity to fly an Alpha Jet, this machine had excellent combat and flight capabilities. In many respects, this provided the aircraft with long service as part of the air forces of many countries (the air forces of France, Belgium, Portugal, Egypt, Morocco and other countries still use this aircraft as a combat trainer).

Resistance to combat damage in a light attack aircraft Alpha Jet was quite good. A well-thought-out layout, the presence of a duplicated hydraulic control system and two engines spaced along the sides of the fuselage gave the aircraft a chance to return to the airfield, for example, with the defeat of Strela-2 man-portable air defense systems.

Lightweight all-metal attack aircraft Alpha Jet was performed on the normal aerodynamic configuration with a high-wing swept form. The engines were widely separated from each other and were located in gondolas on the sides of the central part of the aircraft fuselage. The fuselage also had side air intakes. 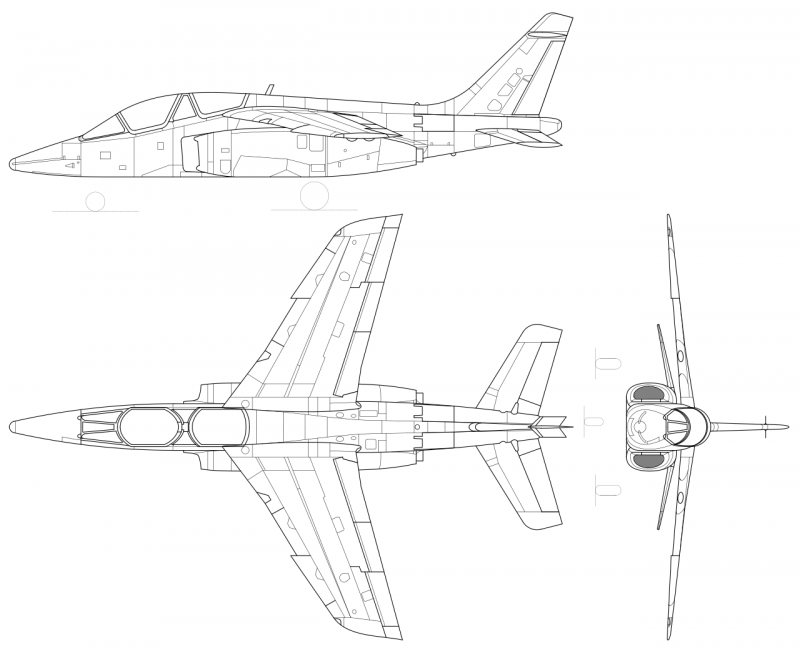 The crew cabin was double (the French insisted on this option) with a tandem crew arrangement (one after another). The rear seat was installed with some elevation above the front, which provided the second member of the crew with a good overview, which allowed them to perform their own landing. The crew could count on two separate cab lights, opening back. French airplanes were equipped with Martin-Baker Mk.4 ejection seats, which allowed the crew to leave the plane at speeds of at least 166 km / h, German planes received Stense SIIIS ejection seats, which provided bailouts and zero-speed aircraft.

The chassis of the light attack aircraft Alpha Jet was three-point, there was a nose wheel. All landing gear were single-wheel, drive - hydraulic. The front landing gear was manageable, it was retracted into the fuselage of the aircraft by turning forward and was shifted 200 mm to the right from the axis of the attack aircraft. The main landing gear was cleaned under the channels of the side air intakes. The design of the landing gear and the technical characteristics of the aircraft made it possible to use it from unpaved airfields. Experts noted that the good adaptability of the machine to actions from small unpaved runways allowed them to be in the front-line, often the place where I was based. With a normal take-off mass, the takeoff run was only 430 meters, and the run was 500 meters. In this light attack aircraft Alpha Jet A, designed for the German Air Force, was additionally equipped with an emergency delay hook. This technical solution made it possible to use brake cable systems for landing in order to reduce the path length.

The armament of a light attack aircraft was quite diverse and depended on the nature of the tasks it was carrying out. The combat load of the aircraft was 2500 kg on 5 suspension units. On the ventral node suspension could be placed container 30-mm French aircraft gun DEFA 553 (Ammo 150 shots rate 1300 Venue / min) or German 27-mm aircraft gun Mauser BK27 (Ammo 120 shots, different firing rate - 1000 / 1700 Venue / min), a container with two 12,7-mm machine guns (250 cartridges per barrel) could also be installed here. Two AIM-9 Sidewinders air-to-air URs and two AGM-65 Mavericks air-to-air URs, free-fall bombs weighing up to 400 kg, as well as incendiary bombs, cluster munitions, caliber NAR could be placed on the four underwing nodes of the suspension. 70-mm, napalm tanks, towed targets or suspended fuel tanks with a capacity of 310 l. 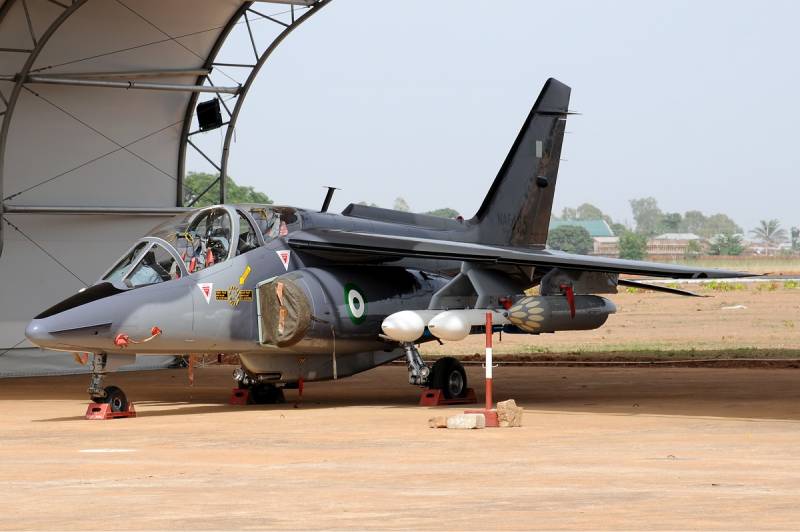 Combat Training Alpha Jet E Air Force Nigeria
Taking into account the wide variety of weapons options and a relatively large relative combat load of the aircraft (up to 30% of take-off weight), experts believed that a light German attack aircraft could successfully hit various targets on the battlefield. Light attack aircraft Alpha Jet could equally well hit stationary and moving targets on the battlefield, and in the tactical depth of the enemy defenses. They could be used for direct fire support of ground forces, isolation of the battlefield, depriving the enemy of the possibility of bringing ammunition and reserves, conducting aerial reconnaissance with strikes on targets found in the frontline. The aircraft could also be used to intercept enemy helicopters. Among other things, the Alpha Jet could be used for strikes on the starting positions of tactical missiles, radar stations, airfields, points of contact, fuel depots and ammunition and other important military targets.

Ctrl Enter
Noticed oshЫbku Highlight text and press. Ctrl + Enter
We are
Are there any prospects for the "flying party" CP-10?Results of the week. "Well, do not change me because of every idiot!"
16 comments
Information
Dear reader, to leave comments on the publication, you must to register.