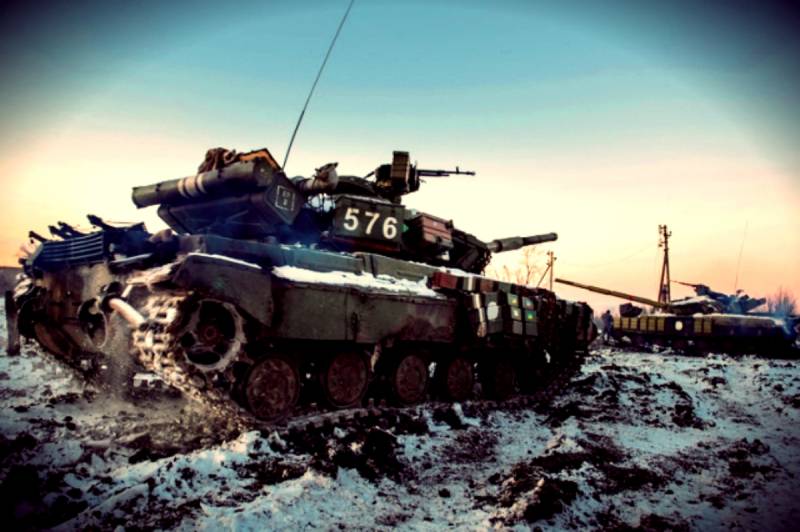 While some of the sides of the long-discredited Minsk-2 continue to harbor illusory hopes for at least some progress from the upcoming meeting between Russian presidential aide Vladislav Surkov and the US special representative for Ukraine Kurt Walker, the General Staff of the Armed Forces of Ukraine intensifies the implementation of the undisclosed (and not of the most militaristic and criminal draft law №7163 “On the peculiarities of state policy to ensure state sovereign and Ukraine on the temporarily occupied territory of the Donetsk and Lugansk regions "(Law" On the reintegration of Donbass ").

Three days after the ratification of the document, the first tragic and egregious provocation occurred with the shelling of a regular bus on the southern access road to the Yelenovka checkpoint. The vehicle was fired from 7,62 mm PKM from a distance of about 1,94 km (while the Ukrainian machine gun crew was deployed 800 meters from the contact line, in a narrow forest plantation where it was pulled from the village of Slavnoe). As the second option under consideration, there may be the penetration of the Ukrainian DRG, armed with PKM, into the western forest planting adjacent to Elenovka, i.e. the fire could be fired from an even closer range, because in the first case, the review at the Elenovka checkpoint was partially blocked by the very near (western forest plantation), which could interfere with firing by Ukrainian militants. The result of the bloody action of the Armed Forces was the death of a 57-year-old man and a previously 66-year-old elderly man who are passengers of the bus. If you look news reports for January 2015 and 2017, you can observe a direct pattern. So, on January 20, 2017, the Etalon bus on the Donetsk-Dokuchaevsk highway fell under fire, as a result of which 52-year-old passenger Melikova Natalya was injured in the lower leg. Two years earlier, on January 13, 2015, the Etalon regular bus near Volnovakha was struck by the initiation of a directed anti-personnel mine MON-50 AFU, which resulted in the deaths of 12 people. Almost every January, Ukrainian militants organize provocations with shelling of civilian vehicles. But back to the current picture.

The so-called bill “On the reintegration of Donbass” was delayed, “finished” and flatly refused to accept for more than a quarter. And now, all of a sudden, they ratified 18 on January 2018 of the year, sending Poroshenko to sign. As if someone did not try to deny this, but the fact of the interrelation of the entry into force of document No. XXUMX with the approval of the supply of "Square" lethal is obvious. weapons (small and anti-tank) from the USA and Canada. Kiev needed to receive final guarantees that the western "players" were ready to officially become a party to the conflict and carry out military-technical support for the Ukrainian military formations, which later took place.

It is quite logical that the pro-government congressmen and the White House did not have any other way, since the rating of the current American leadership has already dropped “below the plinth” after the failure of the planned capture of Abu Kemal by the SDF, as well as the bluff of the commands of the Navy, Air Force, Herbert McMaster, James Mattis and Donald Trump on the readiness to deliver a preventive impunity strike on the DPRK. When, in terms of supporting Kiev from Washington and Ottawa, the points above “i” were already set, the command of the Armed Forces of Ukraine began discussing the approximate delivery dates for the 210 ATGM FGM-148 “Javelin” and 35 paid for by the US defense budget for them. In particular, the head of the General Staff of the Armed Forces of Ukraine, Victor Muzhenko, dated the nearest period of the possible supply of Javelinov with March 2018, which is why a separate contingent of Ukrainian anti-tank operators is undergoing a brief course of technical English needed to complete the training on the use of FGM-148 in one of the NATO countries - exploiters.

Literally "magically" in the same time period (February-March 2018-th) two other events fit in, which are guaranteed to serve as a convenient excuse for playing an "escalation card" in the Donbas theater of operations. First, this is the last phase of the election campaign in the Russian Federation. Despite the fact that the data of the four VTsIOM polls conducted from 20 December 2017 of the year to 15 of January of 2018 of the year clearly indicate the result of the presidential race, no one has canceled the unrest that was previously paid for due to the mound. distressed Russian 5 th column. It was at the peak of the planned destructive actions that the Ukrainian military formations could undertake attempts at offensive "throws" at once on several operational directions of the southern and northern sections of the LDNR contact line. Hopefully, in the event of such a scenario, the Ministry of Defense has already developed a whole range of responses.

Secondly, this is 2 February 2018 of the year, the day when the Ministry of Finance, Secretary of State, and US National Intelligence Director Dan Coates are obliged to submit a report listing the foreign bank accounts of the largest Russian billionaires, as well as majority accounts for the US Congress review in the summer of 2017. their relatives. As it is known, the US Department of the Treasury OFAC (Office of Foreign Assets Control) division, which has almost unlimited access loopholes to any state or foreign financial structures under US jurisdiction, is actively engaged in the formation of the above list.

For example, 5 in January 2018 of the year, OFAC successfully replenished the sanctions list by Iranian enterprises involved in the development and mass production of operational-tactical ballistic missiles and medium-range ballistic missiles (Shahid Harrazi, research center Shahid Eslami) etc.); The sanctions are to completely block the assets of these companies. Similarly, the 30 billion-dollar “bins” of Muammar Gaddafi were frozen before a strategic aerospace offensive operation “Odyssey. Dawn "in March 2011 of the year, of which the OFAC specialists lasted about 2 days. Today, this “office” is working on the lists of our largest entrepreneurs, and therefore, since August 17, anxiety has continued to grow regarding the situation that may prevail after the submission of the above-mentioned report (in the framework of the draft law “On Counteracting the Opponents of the United States through Sanctions”).

Regarding the US National Intelligence, you should not be deceived either, because the 74-year-old head of department, Daniel Ray Coates, is the “hawk” of the old school, who has distinguished himself by far from one tough anti-Russian statement (including a plane crash of intercepting MH17 over the Donbas, etc.). This subject, included in the sanctions list of the Ministry of Foreign Affairs of Russia, certainly will not miss the opportunity to contribute to the report that is being prepared for consideration. The above details can make some unpleasant adjustments to the level of rigidity of the position on the issues of upholding the interests of the Donetsk and Lugansk People's Republics. We hope that this will not happen.

Thirdly, this “magical” winter-spring period of coincidences includes the expiration of the mandate of the mission in Donbass in March of this year, announced by the first deputy head of the OSCE SMM in Ukraine, Alexander Hug, at a meeting with local authorities of Mariupol on January 23 2018 of the year. Relying on objective sources of information in the NMs of the DPR, it can be stated that individual OSCE patrols assisted the Ukrainian army in providing the coordinates of the 1 AK artillery batteries and, by means of its UAVs, even throwing away Donbass will finally untie the hands of the Ukrainian militants hands for the implementation of the bloody actions against the LDNR, planned to the pre-election turmoil in Russia. After all, far from discussing humanitarian problems in the Donbas and the process of exchanging prisoners, Kurt Volker met with the two main curators of the aggression against the LDNR - Head of the General Staff of the Armed Forces of Ukraine V. Muzhenko and Secretary of the National Security Council A. Turchinov.

The validity period of the OSCE SMM can be extended only after approval by all member countries of the organization (as you know, this time, far from all participants benefit from the presence of “extra eyes” in the Donbass theater). The situation will begin to clear up by the 10 days of February, and so far the only news on the evening of 24 January is a massive attack by the APU from the 120-mm mortars 2Б11 from the vicinity of Mariupol to the settlements of Leninsky and Sakhanka (immediately after the departure of Alexander Khug to Donetsk), as well as the transfer to Svetlodar arc of an entire division of 18 combat vehicles MLRS 9K51 "Grad" with additional ammunition.

Ctrl Enter
Noticed oshЫbku Highlight text and press. Ctrl + Enter
We are
Summary of the week 30 September-6 of October on the military and social situation in the DNR and the LC from the military officer "Mag"Mattis's “secret cookies” to the “school truce” promise an “anthology of cauldrons”. Donbass "at the gate" big change!
12 comments
Information
Dear reader, to leave comments on the publication, you must to register.