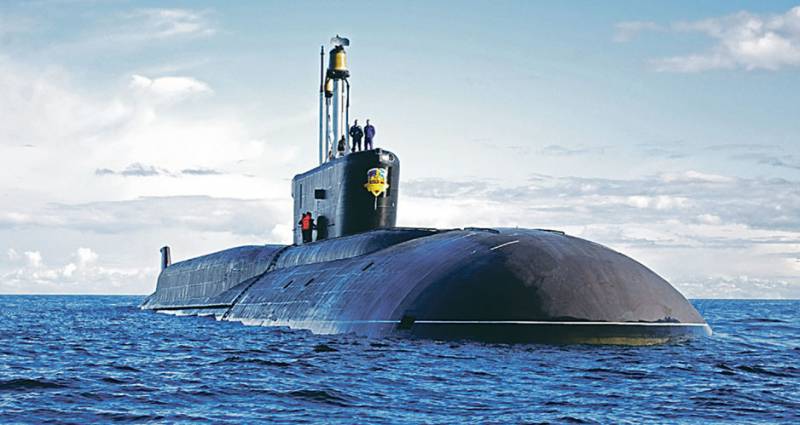 A likely opponent probably sees a breach in the defense of the Russian Federation - the low quality of underwater target detection systems. Now ensuring domination in the oceans is due to the development of the infrasonic range of hydroacoustic signals. Our developers, however, stubbornly remain in sound, and even archaic transformation methods are used. But at the same time they manage to instill in customers confidence in the excellent qualities of domestic SJCs.

In the open press, there was information that the submarine “Borey” is equipped with the MGK-600B Irtysh-Amfora-B-055 hydroacoustic complex, with a range (320 km) superior to Virginia’s (230 km). Note, on these Navy submarines of the US Navy installed GAK, operating in the frequency range 10 – 480 hertz.

The domestic Irtysh-Amphora is equipped with piezo-ceramic hydrophones operating in the area of ​​sound frequencies, which are attenuated 10 times in water at a distance of 10 kilometers. Accordingly, the Irkysh-Amphora State Joint-Stock Company can successfully work on targets with acoustic sound components present in the acoustic spectrum - the same high-speed surface vessels. For the detection of low-noise submarines of a potential enemy, whose radiation lies mainly in the infrasonic range, this SAC is far less suitable.

Modern submarines of the US Navy, when moving underwater at a speed of about eight knots, have a noise level of 120 – 130 decibels in the 10 – 10 000 hertz frequency band. The same indicator for the first serial submarines was 160 – 170 decibels and more, which means that the measures taken led to a decrease in noise by about 40 decibels, and it was in the audio range. Infrasound frequencies, on the other hand, cannot in principle be weakened, and it is permissible for them to compare the effectiveness of hydroacoustic complexes.

The amplitude piezoceramic transducers used in Russian GAK are not physically able to provide their hopes for effective reception of infrasonic signals. Domestic developers are stepping up efforts to create multicomponent systems for receiving sound signals - those that the underwater enemy almost does not emit. And if you do not seriously engage in ensuring the effectiveness of the primary conversion of hydroacoustic information, the domestic submarine fleet will be thoroughly blocked at the locations of superior quality SAC of the likely enemy, and the shelf zones of the Russian sea borders will be opened for unauthorized visits by foreign submarines.

What is the arsenal of domestic hydro-acoustic weapons? These are GAK antennas - phased discrete arrays of complex shape, consisting of several thousand piezoceramic transducers, which should provide reception of signals. The piezoceramic transducer is a high-pass filter, it is characterized by low noise immunity, as well as dependence on changes in static pressure and temperature. The efficiency of piezotransformation is maximum in the region of its own resonance and decreases with decreasing frequency. At the same time, the noises of the sea are amplified just as the frequencies approach the infrasonic range. What kind of early detection of submarines by the existing receivers can be discussed if the sea is at least 60 decibels louder than the useful signal in the infrasonic range?

Systems with towed antennas for operation in a wide range of frequencies are also equipped with piezoceramic elements that provide signal conversion in the audio frequency domain. Little in the operating mode, each receiving element of the system is at a different depth, so they are all clogged with signals from the wake stream. There are also stationary GAK in the arsenal to protect the shelf zone from unauthorized penetration of surface ships and submarines: Liman, Volkhov, Agam, Dniester. Wasn’t one of these complexes installed on the shelf of the Rybachy peninsula polygon, near which in 1992 the American submarine “Baton Rouge” collided with the Russian “Kostroma” (“Hydrophone call”)?

35 years ago, the leadership of the Navy was puzzled by Morphispribor by developing an optical differential conversion method that provides high efficiency. In 1991, funding for this topic was discontinued due to the lack of acceptable technical solutions. But it is precisely the development of an optical hydrophone that is the most promising; the efforts of foreign specialists are focused on this area. In order to materialize such a method, a revision of the basic positions of signal conversion is necessary. Alas, the lead developer, Oceanpribor, does not set such tasks and prefers to be guided by conservative ideas inherited from previous generations. If so, then hope should be left for the implementation of Presidential Decree No. 327 of July 20 of 2017 “On Approval of the Fundamental Principles of the State Policy of the Russian Federation in the Field of Naval Activities for the Period to 2030 of the Year”, at least in terms of parity with the likely opponent the field of sonar weapons.

Ctrl Enter
Noticed oshЫbku Highlight text and press. Ctrl + Enter
We are
The navy will purchase hydroacoustic complexes of the “Mallard” familyWhy do Americans "drown" our submarines?
39 comments
Information
Dear reader, to leave comments on the publication, you must to register.