Knights and Knights of the Rose War era (part 1)

January 29 2018
49
It happened so that the publication of three materials by my university colleague Svetlana Denisova here in VO aroused great interest among the readership of the site and my wishes to write in more detail about the military affairs of this era, tactics, armor and weapons, knights and chivalry of that era, which became the end of the Middle Ages and the beginning of the New Age. It was not possible to do this within the framework of the three publications, moreover, they had the character of a historical sketch, no more. Today we fulfill the request of a number of active participants in the discussion of this topic and will gradually try to answer all the questions asked as part of its discussion. 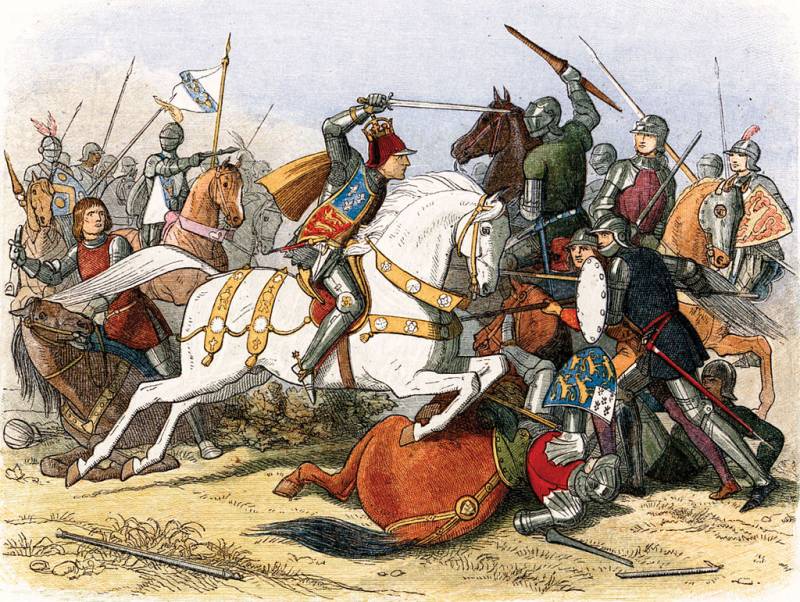 So, as always, let's start with historiography. In the materials of S. Denisova, the names of English-language works devoted to the War of Roses were cited, however, it should be remembered that these are just fairly popular materials. As is the case with history Russia, which should be studied with reference to the “Complete Collection of Russian Chronicles”, the Rose War has its own purely British “chronicle” basis, represented by many so-called chronicles. There are many of them and they are all remarkable and curious in their own way. These are: The Banet Chronicle, The Gregory Chronicle (1189 – 1469), The Short English Chronicle (1465), The Harding Chronicle: The second version for the Duke of York and Edward IV (1460 - 1464), The Harding Chronicle: The second “Yorkist” version, written for Henrikh VI , Capgrave (1464), Kommin (1464 – 1498), Chronicle of the Lincolnshire Uprising (1470), The Story of Edward IV's Arrival in England (1471), Vaurin (1471), The English Chronicle, also known as the Chronicle of Davis (1461), XRUMX, English Chronicle, also known as the Chronicle of Davis (1422) (1471 – 1485), Fabian (1480), Rose (1486 - 1149), The Kroyland Chronicle (1486 — 1500), The Warkworth Chronicle (XNUMX?). So for people nd, who know the English language of the time, the material can be said in abundance. Both from the "whites" and the "red", as well as the Tudor historians. These are the so-called “primary sources”, on the basis of the study of which, strictly speaking, the whole English-speaking historiography of this topic of subsequent centuries is based. Now the main thing - all these sources will never be available to us! Well, who owns the so-called "average English"? Therefore, our historians can work only with secondary sources, and their chronicles and manuscripts are available to them except "pictures", that is, miniatures. However, as it has already been noted here, the British studied in the most scrupulous way all these materials and described the events and facts of interest to us that were quite accessible to us in modern English. 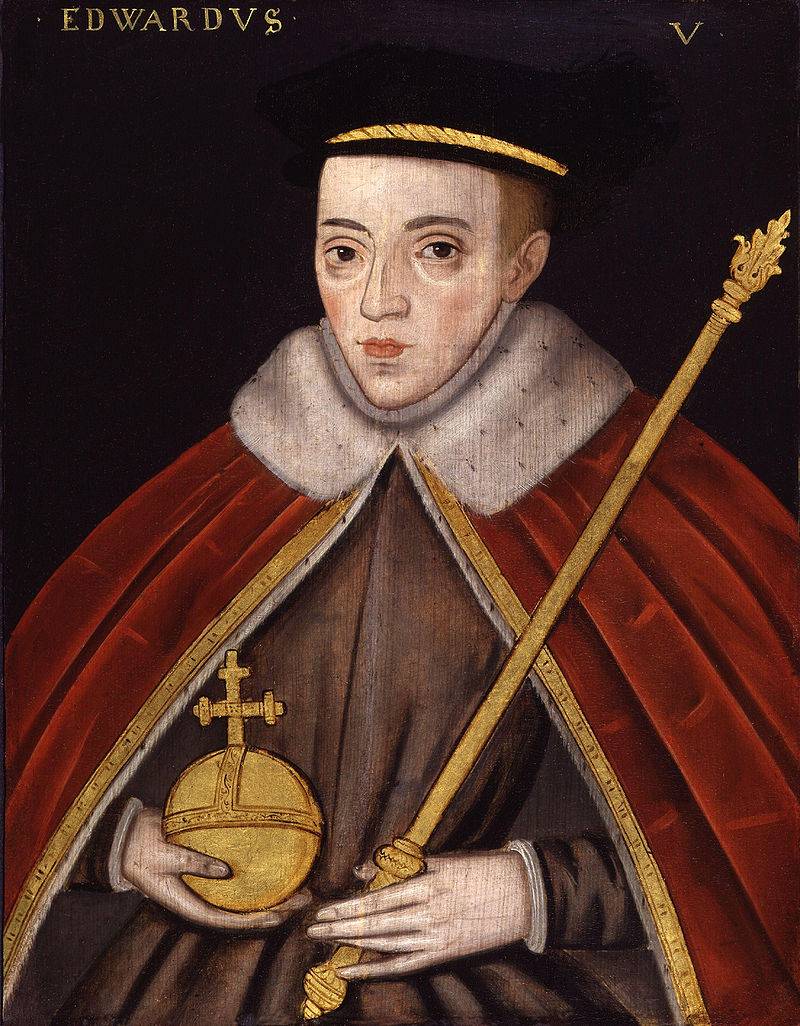 To begin with, we emphasize that the War of the Roses was a war for ... resources. The country was defeated in the Hundred Years War and its human and material resources were largely undermined. But the feudal clans associated with the throne, still had everything that was not all those who were removed from it. And it is clear that by any means they wanted to eliminate their rivals and put "their king" on the throne. Hence the bloody nature of this strife. 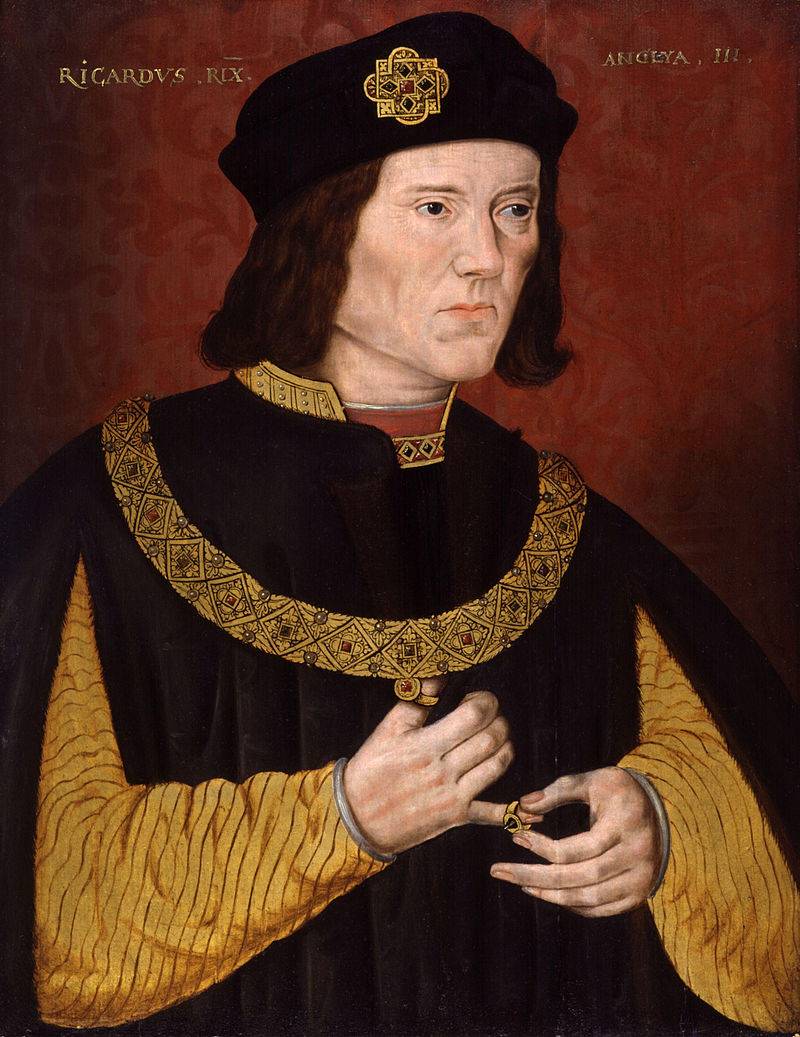 It is also important to emphasize that, although this was a civil war, the neighbors of England, in particular France and Burgundy, took the most active part in it. France wanted to weaken England even more, and Burgundy sought to weaken France, so the continental states did everything to ensure that the British killed each other as long as possible. In their lands, they gave shelter to the fugitives, helped them with money, and even provided military contingents. 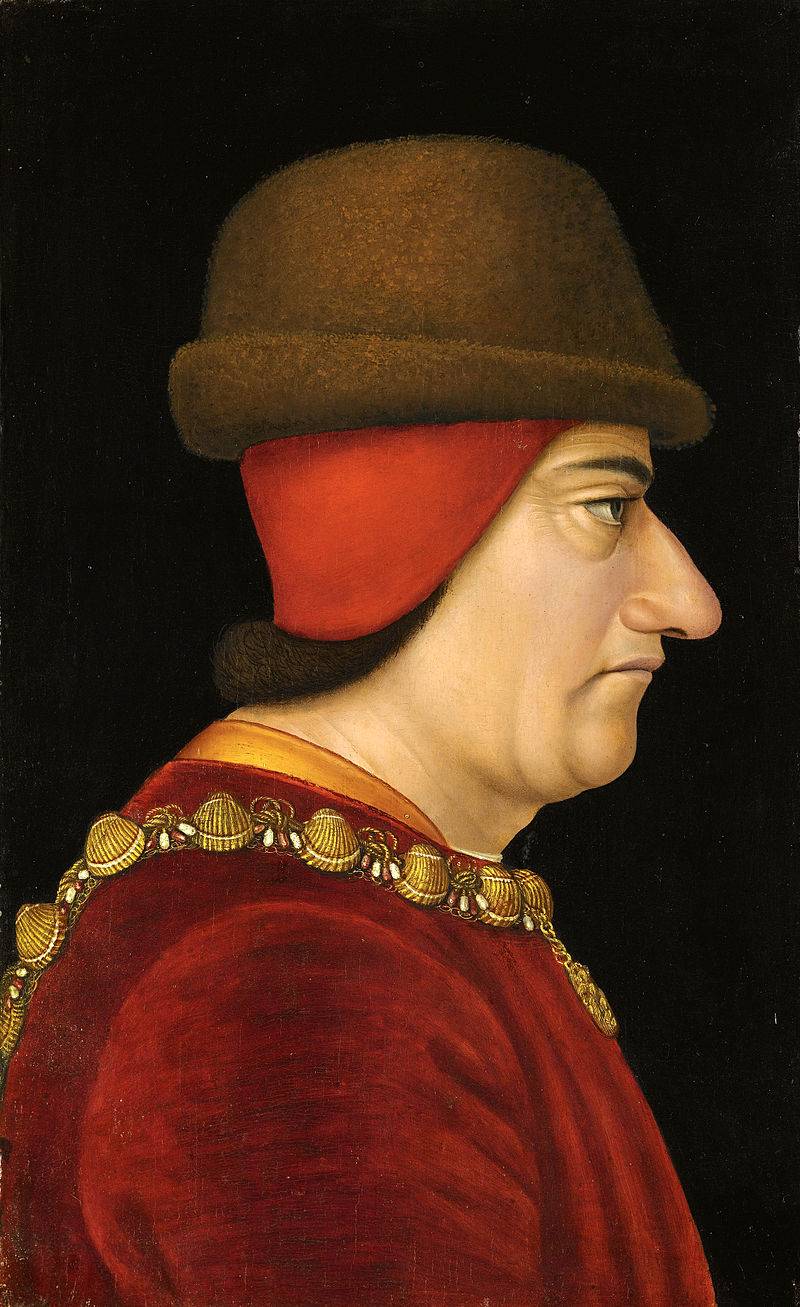 But ... "new time" - new songs! If the Hundred Years War was still purely feudal war, then already in the middle of the XV century the knights no longer fought for the seigneur in exchange for land, but served those who paid the most, based on a system of contracts. Increasingly, landowners preferred to lead the lives of landowners, while the rich bourgeois received knighthood. And those and others did not want to dress up in steel armor and fight in them in the heat and cold. 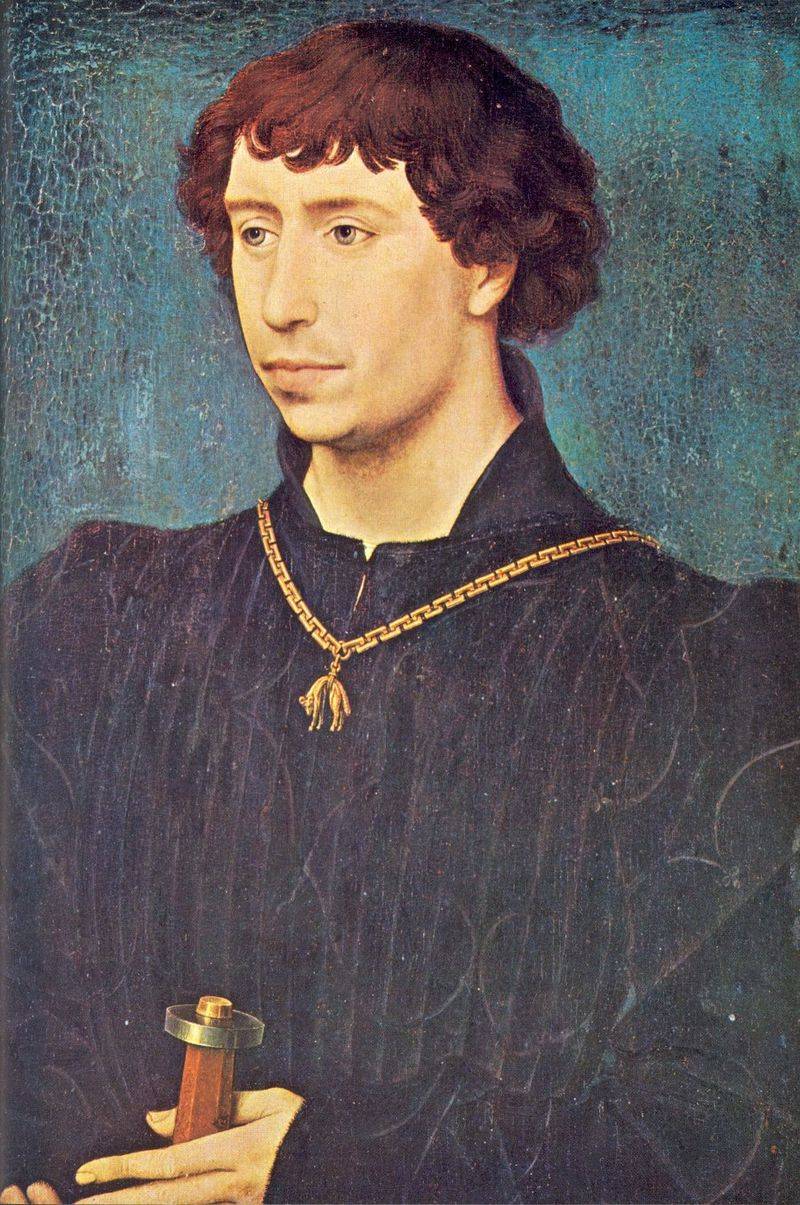 The Duke of Burgundy, Charles the Bold, who supported the Yorks.

Therefore, the institution of squires has spread in England (from the English word –square, “field”, “area”), that is, small holders of land who served by contract, and not on the basis of linen oath. Young people were chosen as squires, including the sons of peasants, they took the trouble to feed, water and train them in military affairs. The future “squire” went hunting with the knights, mastered the Welsh bow and crossbow (we emphasize only as a weapon of hunting, but not war!), And becoming an older man, he followed his master into battle and helped him get him out of the battlefield. Now the “squire” had to not only be able to fight, but also to be literate, read and write in Latin and in French.

Usually the squire was knighted in the range from 18 to 21 of the year. It is clear that the king himself initiated knights from young noble families. But more and more often, the squires did not become knights at all, although, fighting on the battlefield, they could get armor for themselves no worse than the armor of their master. That is, the Rose War coincided with the crisis of knighthood, which now increasingly had to fight not with its own kind of noble warriors, but to fight with the men armed with bows and crossbows, and act on the battlefield against cannons! 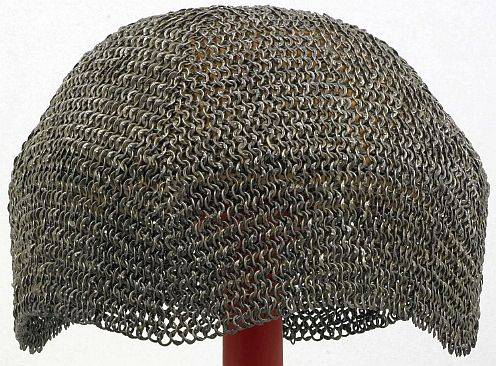 If we look at the miniatures of the era of the Hundred Years War and then the miniatures of the Rose War, we will undoubtedly notice how much the armor of these two wars differ, which followed each other with a small interval. In the Hundred Years War, the knights fought, being dressed in short Jupon jackets, under which were chain mail or stripes armor, a helmet with a bascinet was worn on the head, first with a pointed visor, then with a round, convex one. In miniatures depicting the War of Roses, dressed clothes are present on the warriors only occasionally. In most cases, they wear white armor, in which the chain mail is of secondary importance. Chainmail is used in pieces that are sewn onto a combat doublet — quilted, ready-to-wear clothing. She is sewn under the armpits, on the sides, on the back sides of the elbow joints, using it as a “petticoat” under the skirt of metal strips, or even knit chain mail pants from it, although it was hardly comfortable to ride them.

And now let's turn to “our” favorite effigiyami, because they really will not deceive us and give an accurate idea of ​​what the knights of the Rose War looked like.

This “plaque” (breaststroke) belongs to Giles Dobeny (d. 1446), South Wales, Petherton, Somerset. It has completely “white armor” with a “skirt” of bell-shaped bands. On the head is a large bascinet, behind which, instead of a pillow, a tournament helmet, decorated with flower wreaths, is placed under the head. The armor, as you can see, is very simple. The armpits - which was typical of the early "white armor", were closed with shieldless flaps. The elbow pads and knee pads remind the conch. Approximately to 1440, gauntlets like mittens gave way to real gloves, which could have pyramids that strengthen them, such as gadlings or even thorns for hand-to-hand, on their knuckles. Another feature by which you can easily determine the time of this armor is the oblique sling of the sword. Prior to that, she was worn flat down on her hips horizontally and a dagger was attached to her. With this knight, the dagger Rondel is most likely fixed in a leather loop, simply riveted to the skirt strip. Sword - with the top handle of a characteristic shape, resembling a cork from a decanter.

The plaque of William Wadgem (d. 1451) - that is, just at the turn of the century!). There is a big bascinet on the head, but there is already no spine. They were replaced by half-guns or plate shoulders, descending to the chest and back. Two plates are fastened to the bottom plate on the straps - tassets. The sword has crosshairs, curved forward and disk pommel.

Rich people could afford the pleasure of buying such or similar armor from merchants from Italy and Germany, the knights and squires were content with “serial” armor in large quantities produced in Milan. Knight John Cressi in 1441 bought the exact same set as the two above, for 8 pounds 6 shillings and 8 pence, but the armor for his squire cost him less - 5 pounds, 16 shillings and 8 pence. It is clear that there should have been workshops where each such purchased armor was customized to fit the owner’s dimensions, possibly adding some details to it, since the armor fitting badly on the figure is not at all like a suit not made to measure - how well the armor sat on the body, sometimes life depended!

Ctrl Enter
Noticed oshЫbku Highlight text and press. Ctrl + Enter
We are
Chernobyl notebook. Part of 3My grandfather's front-line letters (part 2)
49 comments
Information
Dear reader, to leave comments on the publication, you must to register.