How German soldiers in Crimea froze 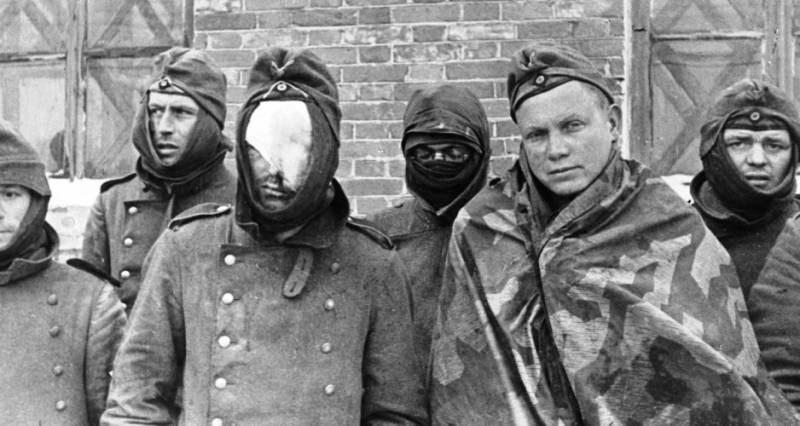 As you know, in 1941, the German command made a fatal miscalculation, not providing its troops with winter uniforms suitable for the Eastern Front. Then, when the consequences of the miscalculation became obvious, one of the German quartermasters came up with a terrific way to help the freezing soldiers, by inventing a stunning instruction for them ...

The anti-tank commander Hans Biederman recalled his participation in the siege of Sevastopol: “The second half of November 1941 was freezing nights. Fortunately, in Crimea there is no cruel Russian winter, and we did not experience the long suffering from temperatures below zero that our comrades in the northern parts of the front had to endure. In the northern and central parts of the Crimean peninsula, winter is mostly similar to the one that happens here in Germany, with frost and snow, but on the southern coast, on the “Russian Riviera,” the weather remains relatively mild. ”

But even there, in the relatively tolerable conditions of the Crimea, the unsuitability of the German uniform for the winter turned out: “The days and nights spent let us understand that the winter uniform issued according to the provision on service in the German infantry division was too light, especially for the soldiers in the front line. In front-line conditions, we were forced to live in open trenches or behind stone walls, and the roof over our heads consisted of a light tarpaulin raincoat. In these primitive shelters, we were open to the elements, and it became even worse with the onset of frost and rain. The rear units, including the intendants and support staff, usually used the opportunity to find warm rooms and settled in the existing Russian houses, despite the fact that large-scale naval guns from Soviet ships and from the fortress could cover these targets far behind us. ” Some quartermaster thinker came up with a way to help the German soldiers: “From somewhere in the rear, we received instructions that at night temperatures below zero, army socks can be used as gloves.

The recommendation, clearly stated in a clear military language, stated that soldiers at the front line should cut two holes for the thumb and index fingers in the sock. Someone probably did not know that our boots were about to be thrown away, and their socks almost turned into tatters and there were so many holes in them that it was easy for us to find openings for all five fingers. ”

Who created this wonderful instruction in serious creative torment? What "gloomy German genius"? Socks instead of gloves, but what to use instead of socks? After all, they have already turned into rags. Underwear for such a need to adjust? Was the problem of delivering gloves to soldiers fighting in the Crimea really such an unsolvable problem? Did the Germans "hesitate" to organize their confiscation in Odessa, Nikolaev and other localities nearby? Do not think to buy them in Romania?

The guerrilla movement in the Crimea and the surrounding territories was just being organized. A serious threat to German communications from the actions of the guerrillas has not yet been. To paralyze the supply of Germans with sabotage at that moment was completely unrealistic. But almost the whole winter of 1941-42 was fought by German soldiers in the Crimea, warmed by a wise sock and glove instruction.

It was only at the very end of winter that the situation began to change: “The companies of our infantry regiments were too exhausted during the months of uninterrupted fighting to perform such a task. Now the 9-I company of our regiment consisted of only 18 people; The duties of the company commander were Feldwebel. For weeks, the soldiers did not know a respite, beating off Russian attacks, and then attacking again. Stress and fighting losses aggravated the climate - wet, cold days and frosty nights. In the trenches, under the shelter of a tattered cloak, pocket stoves on which food could be heated from a candle could be heated only to warm sore joints and stiff hands. We perfectly understood that our light clothes are not at all suitable for the Russian winter.

In response to appeals to society for the help of our all-knowing brown leaders, who were sitting far from the fighting in the East, a collection of clothing was organized for soldiers of the Eastern Front. Warm ski sweaters, fur vests, sportswear, thick blankets, woolen socks and mittens, collected this way by the agency of winter assistance, first came to us in February 1942 of the year. ”

Send socks, mittens, etc., in February, when spring is near - this is just the highest chic of quartermaster bullying a soldier. Although, of course, it would be possible to send gloves to the Crimea in June.

Ctrl Enter
Noticed oshЫbku Highlight text and press. Ctrl + Enter
We are
Myths of the Great Patriotic. Papier mache helmetFather told
11 comments
Information
Dear reader, to leave comments on the publication, you must to register.