Vladimir Shainsky - a bright symbol of the Soviet era

January 24 2018
25
A few days ago the country said farewell to one of the brightest people - symbols of the Soviet era: composer Vladimir Yakovlevich Shainsky. After long approvals, a farewell ceremony with him took place on January 22 at the Moscow House of Composers. Buried composer at Troyekurovsky cemetery. 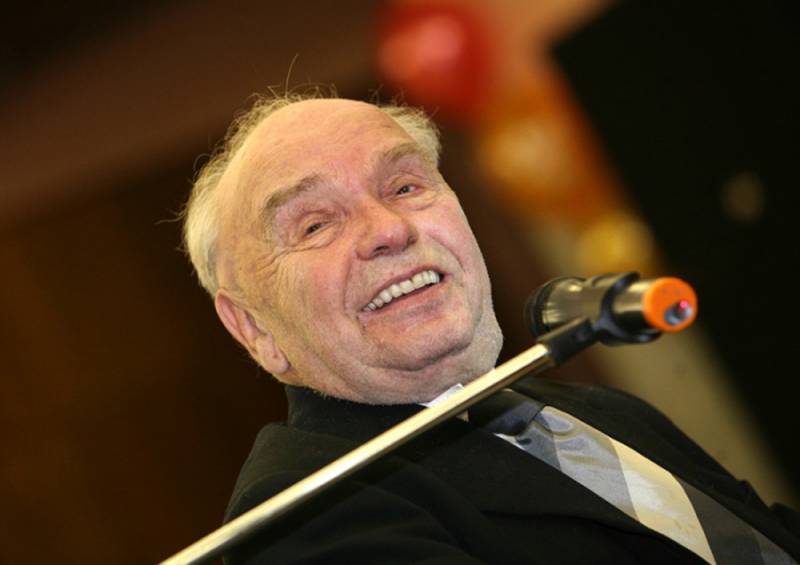 Perhaps this event went unnoticed on our site for the reason that Shainsky is considered, above all, the author of children's songs. But, first of all, his songs played a huge role in the formation of the personalities of the Soviet people, in educating the younger generation - and this already means a lot to the country. For many people with children's love for these sweet and kind cartoons, in which songs of Shaininsky sounded, love for the Motherland begins. Secondly, he was a man of his Epoch - the great Epoch, when our country not only had tremendous authority in the world, but also could create, without exaggeration, great works for children. It is regrettable to state the fact that after the collapse of the USSR too few high-quality cartoons, feature films, real children's songs that all the children would know.

And thirdly, Shainsky wrote not only children's songs, although many media noted, above all, this side of his work. He also composed music for such a well-known song, such as “A soldier walks through the city,” with the lyrics of Michael Tanich. And take the song “Do not cry, girl, it will rain. The soldier will return, you just wait ”(the words of V. Kharitonov) ... Is it not easier to serve a soldier in the army if he is sure that his beloved will wait for him? With all the gaiety and lyricism, these songs raised the morale of the defenders of the Soviet land.

“If we forget the war” ... Poems by Robert Rozhdestvensky, music by Vladimir Shainsky. The well-known, prophetic song that the memory of the war is needed throughout the Earth ... Unfortunately, after the death of the USSR more and more often blows are made to the most sacred - this historical memory. Maybe that’s how much blood spills in different corners of the globe?

The composer has not so famous songs, but very strong ones. For example, "Adzhimushkay", written in the words of V.Dubrovin. It tells about the Kerch heroes who, during the Great Patriotic War, hid in the Adzhimushkay quarries and from there fought a merciless struggle, inflicted sensitive blows on the occupiers. "Hold on, you are not slain, Adzhimushkay, underground garrison" ...

Vladimir Shainsky was born on December 12 of 1925 in Kiev. When the boy was 11 years old, he began studying at the music school at the Kiev Conservatory - he chose the violin as his musical instrument. Unfortunately, the war began, which turned the life of the family and interrupted their studies. Volodya with his family was evacuated to Tashkent. There he was able to continue his studies at the Tashkent Conservatory. In 1943, he was drafted into the army. He served as a signalman, at the same time he began to compose music.

Shainsky began his composer's journey with classical music - he created a symphony and a string quartet. But soon he found himself in a completely different genre - in the genre of song. Especially - the nursery. And also in music for films and cartoons: “School Waltz”, “Az, Buki, Vedi”, “Little Raccoon”, “Trash! Hello, Aniskin and Fantomas, Cheburashka, Shapoklyak and many others. Among his works is also the children's opera Troy vs. Marabuk.

After the collapse of the Soviet Union, the talent of the composer turned out, alas, not to be in much demand. Like the talents of many other creative people. In 2000, Shainsky emigrated to Israel, then moved to the USA. Despite this, he remains our, Soviet, Russian composer, an outstanding son of his homeland. The author of such songs as "Chung-Chang" and "Cruiser Aurora", "Blue Car" and "Together have fun walking", "Crocodile Song Genes" and "Grass, Grass", "Friendship - Freundschaft" and "Going on the BAM train ". These songs reflect our Epoch, an important period in the life of our country, the fun of childhood and the experiences of youth ...

Vladimir Shainsky died December 25 2017 year after a serious illness. And, although it happened in a foreign land (in the USA) - it is very correct that this man found his last refuge in Moscow.

Ctrl Enter
Noticed oshЫbku Highlight text and press. Ctrl + Enter
We are
Reports from the militia of New Russia for 27-28 September 2014 of the yearResults of the week. "Well, do not change me because of every idiot!"
25 comments
Information
Dear reader, to leave comments on the publication, you must to register.