Navigator Day of the Navy of the Russian Federation

January 25 2018
23
Every year on January 25, our country celebrates a professional holiday - Naval Navigator Day fleet Russian Federation. This is a professional holiday for all Russian military personnel whose activities are directly related to plotting ships, ships and aviation The Russian Navy, as well as monitoring the operational operation of navigation devices and calculating movements. Sometimes this holiday is also called Navigator's Day.


An interesting fact is that even relatively recently, the Naval Navigator's Day was celebrated in our country twice a year. For the celebration, the dates of the spring (20-21 March) and autumn (22-23 September) equinoxes were chosen. It was precisely these days that it was easy to determine the directions of the world without using special tools and instruments - the Sun rose strictly in the east, and it set, respectively, in the west. This practice existed until the 1997 year. Admiral of the fleet Felix Nikolayevich Gromov, who served at that time as Commander-in-Chief of the Russian Navy, made changes to the date of the celebration. He signed the corresponding order “On the introduction of annual holidays and professional days in the specialty” on July 15 1996 of the year. In accordance with the order, the Navigator Day of the Navy of the Russian Federation should celebrate January 25.

It is worth noting that the date of the celebration was not chosen by chance. It was on this day of 25 on January 1701 of the year that Peter I issued a Decree, which, in particular, noted: "To be mathematical and navigational, that is, nautical art of cunning art learning." To implement the king’s will, the School of Mathematical and Navigational Sciences was established in the country; a new educational institution was located in Moscow, in the Sukharev Tower. This day today is fairly considered to be officially the date of foundation of the navigator service of the Russian fleet. 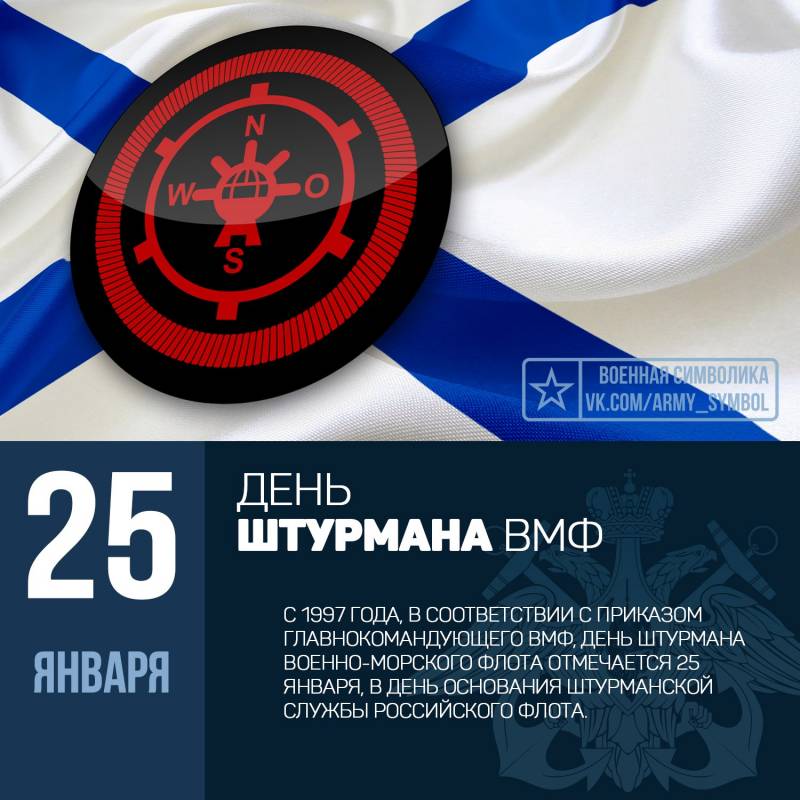 The very word navigator came to us from Holland (stuurman, from stuur - “steering wheel” and man - “man”). Literally it could be translated as a man behind the wheel. This definition accurately reflects the meaning of this profession. At the same time, a few centuries ago, and today, the navigator has a huge responsibility, since at sea a ship can always face unforeseen circumstances. Of course, modern equipment has greatly simplified the work of navigators, but they are still required to perform their work without modern electronic equipment, which can fail for various reasons.

Peter I, who laid the foundations of the Russian fleet, was well aware of the importance of the navigator service. In this case, the duties of the navigator and the ship's sub-navigator were documented in the 1720 year, they were contained in the first Russian Sea Charter. On the ship, depending on his weaponry (number of guns), it was necessary to have a navigator 1-2, who had a sub-navigator in 1-2 subordinate. For example, on vehicles with linear 50-90 instruments have relied on state and two two navigators podshturmanov, if 32 guns - at 1 2 navigator and assistant navigator, 14 16-shells - and the navigator on 1 1 podshturmanu. At the same time at that time the position of the navigator in the fleet stood in order of seniority between the skipper and the boatswain. For navigation, the navigator reported directly to the captain.

Navigators were required to receive the necessary supplies for the navigator part (compasses, magnets for magnetizing compass hands, lots, hourglasses, etc.). On a battleship in those years it was supposed to have 8 magnetic compasses right away and up to 10 an hourglass of various lengths: from half a minute to half an hour, inclusive. At the end of the campaign, the navigators reported to the captain on the use of supplies, and then handed over the remnants of the warehouses (stores). At the same time, navigators should have had their own personal atlases of nautical charts, navigation aids and instruments (quadrants, hailstones, noctures, compasses, etc.). Also, the navigators were obliged to keep in order the compasses, periodically to check them, to monitor the hourglass. 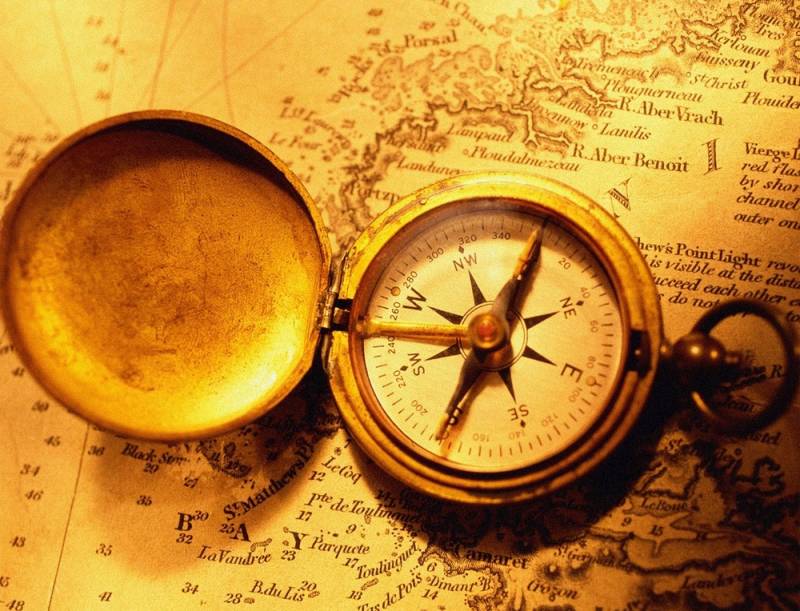 Immediately before the maritime mission, the navigator was charged with inspecting the steering wheel. At sea, navigators were responsible for analytical calculations, recording in their journal the course, the drift of the ship, the distance traveled by the ship, the compass declination, the flow of the sea, the wind, and a lot of other information. When sailing near the coast, navigators were obliged to study it, mapping all unfamiliar shoals, rocks and large stones. When anchoring the vessel, they were engaged in controlling the time of his throwing depending on the drift, and after anchoring, they followed the ship's movements.

At one time, many famous Russian naval commanders began their military career with the position of navigator of the ship. Among them were the admirals who laid the foundation of the modern fleet of our country, such as S. Gorshkov, V. Mikhailin, A. Mikhailovsky and many others. AT stories Great geographical discoveries names navigators ranked with the names of the commanders of ships. For example, in the Primorsky Territory alone, the names of the navigators of the Russian fleet were named Cape 64, 12 Island, 9 Bays and 3 Peninsula, thus their names were immortalized for history.

More than three hundred years have passed since the appearance of the fleet in Russia, shipbuilding, science and maritime business have come a long way since then, but the navigator’s work is still in demand and honored in the fleet. According to the Chief Navigator of the Russian Navy, Rear Admiral Edward Luika, the navigator specialty, which appeared in our country simultaneously with the appearance of the first warships, today is highly demanded, this specialty can be called one of the main naval specialties in the Russian Navy. The admiral emphasizes that even without a navigator, even in our time, it is impossible to imagine either the movement of a ship, or its actions to use standard weapons systems on board. In the conditions when Russian warships and submarines again perform the responsible tasks of a naval presence in the oceans, the role and responsibility that falls on the shoulders of naval navigators is only increasing. 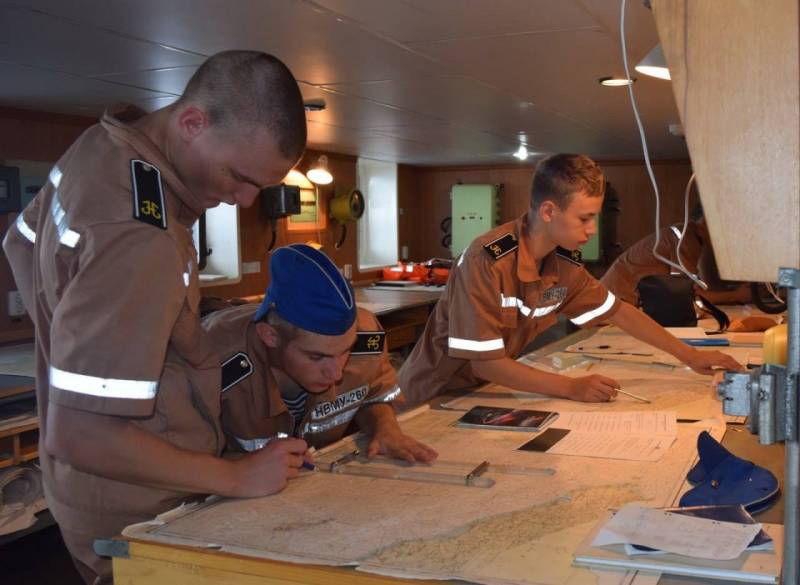 According to the data on 2017 year, the navigator service of the Navy of Russia numbered about 3000 specialists, about 1000 of which are officers. It is also more 200 people faculty of various Russian naval schools. About 50 of them have a degree, and more than 30 teachers have an academic title. Today, the naval service of the Russian Navy includes more than 10 training units, the main ones of which are the departments of the naval navigator service in the Naval Academy, the ship navigation department in higher naval educational institutions located in St. Petersburg, Sevastopol, Kaliningrad and Vladivostok, and also in the training centers of the Russian Navy. The navigator service of the Russian fleet today has at its disposal both special simulators for future naval training for navigators and modern training laboratories. Also, for the naval training of navigators, several training ships and about 10 training boats are actively used.

At the same time, the prestige and demand for the navigational profession are still high. This is confirmed by a fairly high competition for admission to study. So in 2016, the competition in the Russian naval educational institutions for the navigator's specialty was 3,5 man per seat. The Russian fleet is interested in the qualitative selection of candidates for admission to the first course in the navigator's specialty. The quality of the selection and training of future navigators directly determines the successful fulfillment by the warships and vessels providing the Russian Navy with assigned tasks, without various incidents and navigational accidents, which at sea may have the saddest consequences both for the ship and for its crew.

“Training navigators for the Russian Navy today takes into account the active process of fleet renewal as part of the State Shipbuilding Program, receiving new surface and submarine ships of the new generation into the fleet, equipping the navy with new weapons, modern navigation systems and complexes. Before the ships of the Russian fleet are increasingly assigned important tasks that are directly related to the actions in the composition of heterogeneous, interspecific and homogeneous groups. All this requires from the specialists of the navigational services of all Russian fleets and the Caspian flotilla an even higher level of professional and practical training, ”notes Rear Admiral Edward Luik. According to him, navigation support for the fulfillment of assigned tasks at sea is acquiring even greater importance nowadays, as Russian ships are increasingly appearing in various parts of the World Ocean, often still poorly understood. 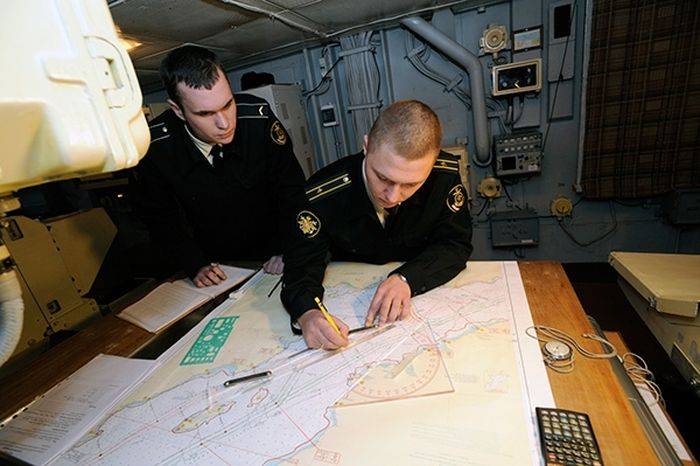 January 25 team "Military Review" congratulates all the navigators of the Russian Navy and veterans of the navigator service with their professional holiday. The Naval Navigator's Day of the Russian Navy is a holiday for all people who, as part of their duty, performed or continue to perform very important tasks to ensure the navigation safety of surface ships and submarines, as well as various vessels supporting the Russian fleet in various regions of our planet - from the hot tropics to Arctic ice latitudes.

Ctrl Enter
Noticed oshЫbku Highlight text and press. Ctrl + Enter
We are
Naval Navigator's DayReports from the militia of New Russia for 27-28 September 2014 of the year
23 comments
Information
Dear reader, to leave comments on the publication, you must to register.