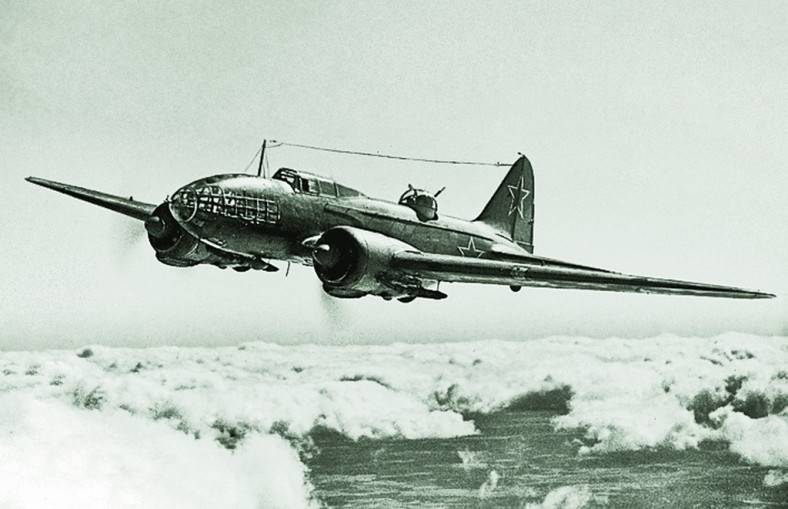 В stories aviation long-range period of World War II, there were two unique cases: a fall from different heights of a navigator and a pilot with undisclosed parachutes, which ended successfully: both aviators remained alive. It happened in January and April 1942. Both the navigator and the pilot had to leave the same type of aircraft DB-3F (IL-4).

25 January 1942, the squadron of the 98 th bomber regiment of the long-range bomber aviation, which included the crew of the pilot N. P. Zhugan on the DB-3 f plane, flew to the bombardment of the railway junction in the Warsaw area. After completing the combat mission, the pilots sent the plane to the base, but were attacked by the Messerschmitts and were shot down. Nikolay Zhugan ordered the crew to leave the plane with parachutes. Only the navigator responded to the team. Ivan Chissov left the plane, jumping out of the lower hatch. The height of the aircraft was about 7000 meters.

“When they hit us in the tail fins and killed the shooter and the radio operator, the plane began to lose height, and then suddenly turned over with its“ belly ”up. The tail of the aircraft was repulsed, so it rolled over. Oxygen hoses were torn off. I tried to sit on my knees and take the pedals to pull my body to the astrolian. One attempt succeeded, but it could not be opened with fingers or hand. Then I beat him with the fist of my right hand. So in the upturned state of the aircraft, I fell out of it. And the fighter is right there. He felt a burn in his left leg. Decided not to open the parachute. Falling with undisclosed. And when he began to distinguish the earth, it is somewhere meters 700, pulled the ring. But what is it? Ring with a rope in his hand, but the parachute did not open! That's where the thought came - that's all, the end. Then I realized that the cable connecting the exhaust ring with the parachute gate turned out to be broken.

I fell at the beginning of the slope of a ravine, thickly covered with snow. The parachute is under me ... Then I began to turn from head to foot. When the body stopped in its fall and rotation, I felt that I was being poured with blood — it was going through my throat, nose and ears. And although there was noise in my head, the dog barking and the cock crowing were auditioned well. I realized that not far from town. He wanted to wipe his face with blood, but his hands did not rise. Then people with stretchers came up and carried me to the hut. There they undressed me, put me in order, put some warmers on me. In the evening Zhugan came, questioned, and after that I was sent to a hospital in Mosalsk. 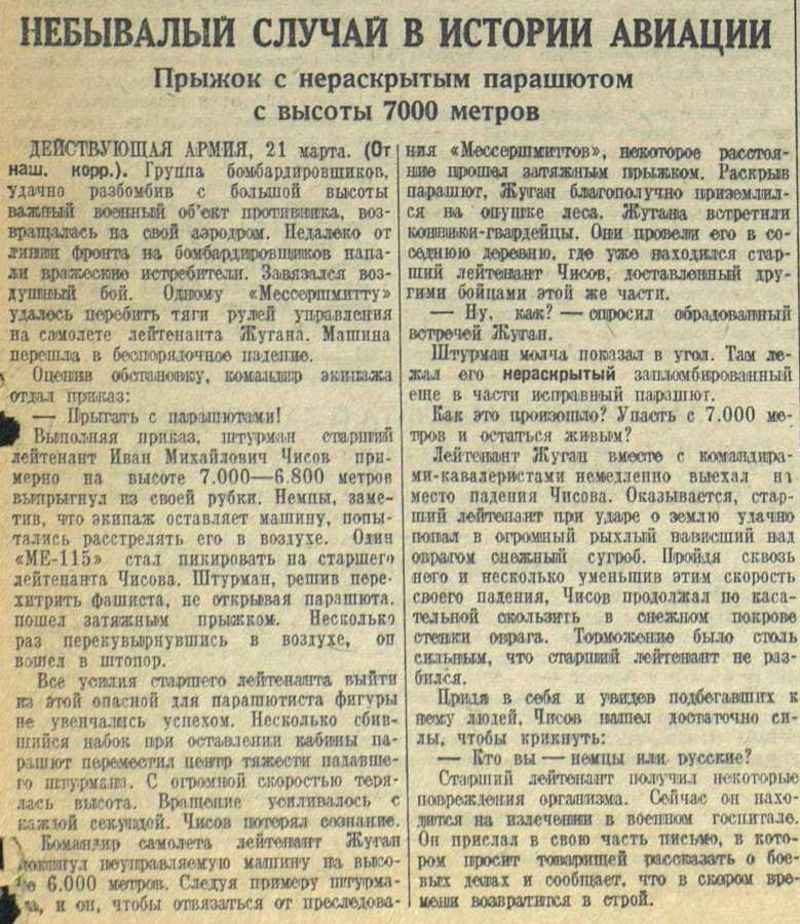 From the flight work written off, but in the frames left. He became a teacher of navigational affairs in the Voroshilovgrad military school.

The group, which was to strike at the rate of Hitler's command in Vilna, included the crew of V.K. Grechishkina.

Above the target, the bomber came under heavy anti-aircraft fire and, in addition to everything, was attacked by an enemy fighter. Right motor out of order. Upon returning to cloud cover, the car began to ice over. All devices are out of order. The commander and navigator decided to fly strictly to the east as long as there was enough fuel. It is on the plane is not infinite, and once had to end. Fortunately it happened already over its territory. Typing in the last liters of fuel 900 height meters, the captain ordered the crew to leave the aircraft. The pilot himself was thrown last at an altitude of 600 meters.

Having counted out the set five seconds, Grechishkin pulled the hood, but ... did not feel the usual inhibition of the fall. He threw back his head, and there, instead of a white dome, he saw a parachute canvas twisting with a rope. Throwing off his gloves, he began to pull this rope to himself, hoping to dissolve the lines. But the height was not enough. Blow, loss of consciousness. In such a state, with parachute lines suspended in his hand, he was found by a groom in the morning. Making sure that the pilot was alive, he took the village to the hospital, and from there it went to the hospital.

- Luck! Luck in the sense that I fell on the slope of a ravine and in deep snow. Then they told me that his depth was about twenty meters. Lost consciousness, but not for long. Woke up and heard someone talk. It seems that I am somewhere in the dungeon. I wanted to shout, but there was no voice. And the snow cover was heavy. After a while I was able to move my arms and legs. My movements are noticed. I was dragged out and put in a sleigh. Then PO-2 flew after me. So I ended up at the hospital.


These are two absolutely incredible cases during the war. One of them was awarded the Guinness Book of Records.

Ctrl Enter
Noticed oshЫbku Highlight text and press. Ctrl + Enter
We are
The father of Russian physiology. Ivan Mikhailovich SechenovConversations with Timofey Panteleevich Punev. “No air force had a bomber similar to the Pe 2.”
23 comments
Information
Dear reader, to leave comments on the publication, you must to register.