Mikhail Delyagin: The West is preparing a coup for us

January 24 2018
79
The aggregate West (including global speculators and their organizational structure — the American state) has launched a war of annihilation against Russia — for the time being, a cold one. 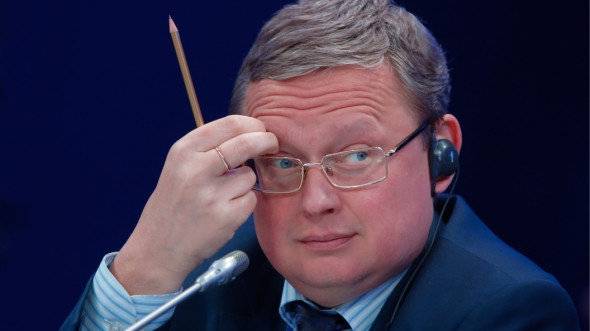 The most important reason for this is the value incompatibility of our civilizations, exposed by Vladimir Putin’s Valdai speech in September 2013: the West’s employee of profit transforms a person for new types of consumption and, consequently, new markets, and Russia sees it as dehumanization.

In addition, the United States can exist only as long as the rest of the world pays for their consumption, lending them money at non-market low interest rates (that is, buying their government securities with non-market low yields). For this, they need the chaos of the world - so that intimidated world capitals move to the USA as the only “safe haven”. Russia has stopped the expansion of chaos in Syria and in the Donbas and, from the point of view of the US leadership, should be punished for that. After all, if chaos does not expand, if fear does not increase, the United States will remain without the influx of money they need.

The global crisis no longer allows increasing profits by increasing revenues - and monopolies are moving to lower costs. Libya, Syria and Iraq have shown that the strongest field commander sells oil many times cheaper than the weakest state - it means that “field commanders” should be in charge of oil exporting Russia, and not the state.

It is important to take into account the shock that the West is still experiencing because of the manifestation of Russia's sovereignty over the issue of reunification with the Crimea - without asking for it, the West, without permission.

To understand the level of this shock, imagine that every morning during 30 years you opened the refrigerator and had breakfast with a chop lying there (the relations of the West with our country with 1987 of the year are not a “horseman” relationship with the horse, ” . And then one day this cutlet spoke to you. And she even stated that she is ready to enter into negotiations with you, equal, honest and based on international law. Do not you start painfully remember that they drank the night before?

Western elites are precisely in this state: they do not believe their eyes. But they understand that this obsession will not dispel by itself. We must act. The standard course of the West against states demonstrating the desire for sovereignty is the organization of a coup; we have seen this more than once.

An important detail: the West needs not the coming to power of its puppets, but an incomplete coup, anarchy, chaos, the disruption of Russia in turmoil and the destruction of our statehood.

The objective allies of the West are Russian liberals, proceeding from the paradigm of serving the state to global monopolies, and not to their people. Through the government and the Bank of Russia, they control the country's socio-economic policy and strive to regain their full power, which they had in the 90s.

Their allies are a large part of the West-oriented representatives of big business and top management, who are already accustomed to perceive President Putin as an obstacle to their current and direct threat to their strategic interests.

Liberals have someone to rely on. Even the uncontrolled government bodies are largely disorganized and do not have a strategy. Partially, they demonstrate openly ignoring the needs of the Russian population (it’s enough to recall the head of Kaliningrad region’s governor Alikhanov to the question “Why are the regional authorities not planning to restore reimbursement for kindergartens?”

Public administration bodies do not create guidelines for society. And even if these guidelines will be designated by Putin, then after five years of unpunished sabotage of his May decrees by the liberal government of Medvedev there are fears that the words of the president will not be accepted by the society with former enthusiasm. Russians will lose their sense of perspective (except for the prospect of further destruction of the economy and lower living standards), which will make them susceptible to manipulation and provocation.

Russia's refusal to respond with a “blow to blow” on foreign policy, its vain appeals to the West to observe the norms of international law (trampled by the same West in 1999, when they bombed Yugoslavia) and appeals for cooperation (while the West took a course our destruction) gives the impression that the Russian state is losing the subjectivity gained in the days of Crimea and the impunity of the further escalation of the West’s aggression against us.

Under these conditions, a recent humiliating action with the prohibition of our national flag at the upcoming Winter Olympics can be regarded as an "artillery preparation" from the West. And the inability of the state to protect from the obvious arbitrariness the pride of Russia - its champions - causes the masses of fans to feel a weakness of such a state.

At the same time, the recruitment of Russian oligarchs and simply wealthy people in the United States and Great Britain and the transformation of the Russian “elite” into a coup d'etat is going on. Whoever doesn’t want to become a Western agent, the arrest of Kerimov as a “subtle hint”.

Tangible strikes should be expected immediately before the presidential elections. One of these could be a full-scale offensive of the Ukrainian army already prepared for this in the Donbas to drag Russia into a fratricidal war.

In the economic sphere, we can expect a ban on the basis of sanctions on foreign investments in Russian government securities. This will cause the flight of speculative capital, and possibly the devaluation of the ruble, the disappearance of some goods from trade, the increase in prices for the rest.

It is also possible to freeze state assets of Russia in the United States, which means the loss of more than a quarter of international reserves and the aggravation of devaluation. Preparation of a similar freezing in Europe is not excluded.

Finally, various kinds of sabotage are possible, including computer, destroying the public psyche and creating the impression of incapacity of the state. Rehearsals in the form of shares of telephone terrorism and computer attacks on Russian banks - to identify state response schemes - have already been held.

Against this background, it will be possible to proceed to the direct organization of the Maidan. It is significant that Facebook seemed to have worked out a mechanism for intercepting control over the accounts of leaders of public opinion, placing in them calls opposite to their political views, written with perfect observance of their style. For example, Alexander Prokhanov did not regain control of his account under openly absurd excuses for a long time - during which his account was used for frantic and completely contradicting his views (but ideally corresponding to his style) anti-Russian propaganda.

It is possible that such control will be established over a large number of accounts of Russia's key public opinion leaders (and not only on Facebook), which suddenly deployed their audience not to protect, but to destroy statehood.

The “crawling away” from Russia of Kazakhstan (a sudden forced transition to the Latin alphabet) and Kyrgyzstan (which introduced the national holiday in honor of the anti-Russian uprising 1916 of the year and abandoned its obligations under the EAEU, all this after Putin’s personal support of its president) .

It is important that one cannot defend oneself from the West’s aggression without eliminating the moral, psychological and material dependence of the political class of Russia on the West (eliminating “offshore aristocracy”), and also without moving from a strategic defense (guaranteeing defeat) to an active, diverse and resourceful offensive against the West.

In addition, the condition for the existence of Russia is a decisive transition from the policy of destroying our country in the interests of global speculators to its development: comprehensive modernization of the infrastructure, which requires limiting financial speculation and monopolism, eradicating corruption; reasonable protectionism; guaranteeing a real subsistence minimum; normalization of tax and migration policies, health and education.

However, even signs of understanding of the threats and tasks set forth are not visible yet.

Ctrl Enter
Noticed oshЫbku Highlight text and press. Ctrl + Enter
We are
The world we leave, the world we enter, and the world between themOn the other side of the “red” and “white”. Izborsk Club Report
79 comments
Information
Dear reader, to leave comments on the publication, you must to register.