January 25 2018
39
In the Carpathian region, in the presidential residence "Sinegora" Petro Poroshenko recently held a meeting in a narrow top circle. It is noteworthy that, among other things, the Speaker of the Rada Parubiy and the head of the National Security and Defense Council Turchinov were present; Interior Minister Avakov and Ex-Prime Minister Yatsenyuk refused to attend; A representative of the US embassy was not invited. The list of participants and non-participants in this meeting speaks about the current political situation in the Bandera remake four years after its formation and prospects. 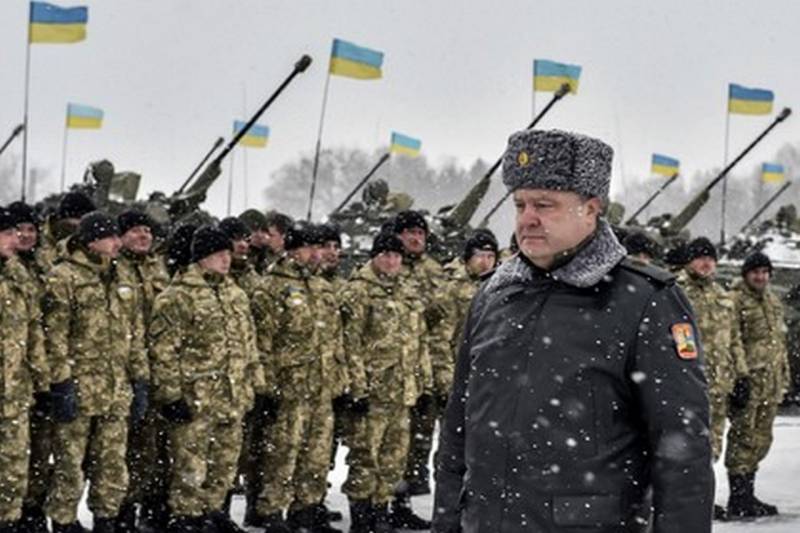 There is a split of the ruling elite of the “Bandera democracy”, behind which stands the American embassy, ​​the arbiter of all the “young independent democracies”, and this arbiter, that is, the judge, relies again on Arseniy Yatsenyuk and his comrades. After a rest in Los Angeles, Yatsenyuk plunged into parliamentary activity, ardently supported the adoption of the law “on reintegration” - the war in the Donbas, and, as we see, is very cold towards Poroshenko. Like the US embassy in Kiev, which criticizes Poroshenko for the “wrong” bill introduced to the Rada on the Anti-Corruption Court.

By the way, this split of the junta, and the position of the US embassy, ​​explain the continuation of Mikhail Saakashvili’s adventures in Kiev, who also arrived to Ukraine from the USA, and the integrity of Mihomoydan, still under Avakov’s sensitive guardianship, which is still overclocked, apparently waiting for the fourth anniversary “ revolution gidnosti.

Kiev political analyst Mikhail Pogrebinsky called the Rada’s adopted law “On the Reintegration of Donbass” also “the first step towards war with Russia.” This follows from the text of the law. Other experts recall Poroshenko’s words about a “politico-diplomatic” solution of the Donbas issue with the help of the law “On Reintegration”, which, as it were, excludes the war in Donbas from the current agenda. They believe that "reintegration" can be directed inside Ukraine, up to the imposition of martial law in Lviv and Transcarpathia. What is Poroshenko's ploy here? - Probably, the American ambassador Marie Jovanovic does not know either.

The moment of truth will probably be Poroshenko’s signing of a law on “reintegration” - a war that he promises to do. The “war party” in Kiev, headed by Yatsenyuk, will demand the literal implementation of this law, that is, the commencement of hostilities in the Donbas, along with the American embassy and the Maidan of “Saakashvili”.

Russia is also preparing for the force option, the special representative of the Russian Federation in Minsk, Boris Gryzlov, said that “the United States sanctioned the force solution of the Donbass issue” with the law “on reintegration” adopted with their submission. Add, coinciding with the presidential elections in Russia with a view to delegitimizing them. With the adoption of the law “on reintegration”, Poroshenko can legally begin military operations in the Donbas.

Moscow, in order to declare its position, is waiting for the official entry into force of this law, where Russia is called the “aggressor” and the “invader”, who disavows the Minsk agreements. What will be the answer? Vladimir Zhirinovsky on air Vladimir Solovyov said that he would submit to the Duma a bill on denouncing the Grand Treaty of Friendship between Russia and Ukraine. There used to be precedents when Zhirinovsky predicted the actions of the Kremlin. Such an answer to Russia will have major consequences, not only for Ukraine, but also for Europe and America.

For four years now, the Bandera issue has revolved around the transit of Russian gas to Europe. Nobody knows when Moscow will gather with the spirit and put an end to the Ukrainian transit, or will Bandera help with this? Plans to blow up the "pipe" from the "Bandera guides" were, but they were frightened by the wrath of Berlin and Europe.

Today, Europe has somehow become less concerned about its own interests in Ukraine, the United States has become more active, but their Russian-European “pipe” does not care at all, even if it explodes. This pipe can explode if a “reintegration” war begins in Ukraine, because it is impossible to predict where and how it will end. In this respect, the mining and infantry brigade of the Donbass rotation by rotation in Transcarpathia 128 is noteworthy, to the place of permanent deployment, although this fact can be interpreted in different ways, given the aggravation of relations between Kiev and Budapest.

Poroshenko is now under suspicion of his Western donors, formally, not in opposition to corruption. In fact, the list of claims against Poroshenko is different and much larger. The US demand from Poroshenko for anti-corruption reform of the country is the famous American “impracticable requirement”, or another operation “under a false flag”, which often ends in death for the patient.

If Poroshenko postpones the signing of the law “on reintegration” - to the war, sending it to the back of the Constitutional Court, or postpone the war announced in that Donbas, this law, Arseniy Yatsenyuk can join Mihomaydan, and with Avakov and the US embassy, ​​together with the Nazi “Azov” the demand for the immediate creation of the Anti-Corruption Court, and the national impeachment of the “huckster Poroshenko”. And Poroshenko will be the second Yanukovych ...

George Soros, the famous American prophet, again turned his eyes on Europe in an interview with the Financial Times: “The European Union is an institution that is on the verge of collapse. Now Russia is a resurgent force. ” Given the special “love” of Soros for Russia, it is difficult to explain such a forecast by his flattery to Russia. As for the collapse of the European Union, it is inevitable if the transit of Russian gas stops, other prophets have been talking about this for a long time, including adviser to President Reagan, economist Paul Craig Roberts. In other words, Soros from America foresees the explosion of a transit gas pipeline in Ukraine.

Ctrl Enter
Noticed oshЫbku Highlight text and press. Ctrl + Enter
We are
Reports from the militia of New Russia for 27-28 September 2014 of the yearResults of the week. “While the enemy draws attack maps, we change landscapes, and manually”
39 comments
Information
Dear reader, to leave comments on the publication, you must to register.