America without a muzzle 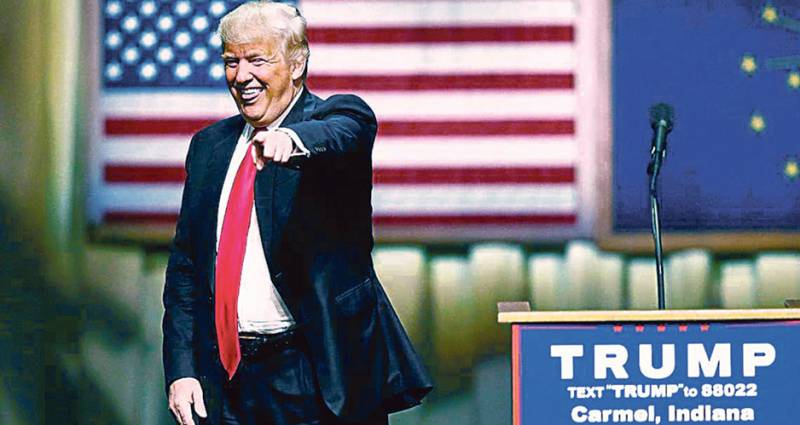 Russia's relations with the United States are rapidly moving from a cold snap to frosts. Americans one after another strike at the most sensitive places of the Russian economy - the oil and gas and banking sectors. In February, after the publication in the US of the list of businessmen close to the highest authority of the Russian Federation and implicated in corruption, bitter cold is expected. But to someone in Russia this can get very hot.

Russian elite in bewilderment. How so? Mr. Trump promised before the elections to improve relations with Russia. And now they are the worst in the last 25 years. The blame for this is blamed on the restless neoconservatives (neocons), who have long formed the US foreign policy. This is a special group of influential figures, such aristocrats - the fathers of the nation, which considers a business, even a large one, not quite a worthy occupation for true gentlemen. Their high calling is to define the international relations of America.

The National Security Council, the State Department, the CIA, the foreign policy departments of major newspapers and magazines, elite universities — these are the habitats of these predators of the night, ready to shed the blood of hundreds of thousands in the interests of, of course, unwise people, the light of progress and democracy to which they have to be conveyed by means of bombs and rockets.

Although, of course, the neocons are closely connected with big business. At the end of the prestigious universities, they go to large banks and financial corporations. From there to the high sphere of foreign policy, inaccessible to commoners. And then, honestly serving American imperialism, again on warm, but already much more highly paid places in banks. Everything is debugged long ago.

And suddenly there is a nouveau riche Trump. Yes, of course, he has achieved impressive achievements in a difficult construction business. But in foreign policy - zero. Meanwhile, the neocons do not care who sits in the White House - a democrat or a conservative. They always rule. Trump tried to do something in his own way, but he was quickly enlightened by a wild campaign of “revelations” in relations with Moscow.

It would, however, be a dangerous delusion to assume that Uncle Don is an innocent victim of evil neocons. In terms of aggressiveness, he will give 100 odds to any Harvard or Princeton graduate. Note that Mr. Trump is not only a president and a successful entrepreneur. He is also the author of several books on the popular topic "How to achieve success."

Take one of them: "Big thoughts and do not slow down." There Trump's life philosophy is articulated very frankly. In order to understand how America’s relations with Russia will evolve, it is useful to familiarize yourself with these revelations. Quotes are lengthy, but they talk about Trump's style more than a bunch of articles.

“... If you want to win, you need to be strong, like flint, and ready to work with elbows and fists. You will try to rob and trample. You have to take the fight, give back and kick their ass ...

When someone deliberately harms you, my advice: pay off in full! If you do not settle scores, then you are a jerk! If someone has hurt you, grab the villain in the throat ...

Always rush at people who rushed at you. Always give change. We live in the jungle, which is full of all kinds of animals that are sure to try to attack you. If you are afraid to give change, people will perceive you as a loser! They will know: whatever they do, they insult you, show disrespect, use you openly, they will get away with it. Always give change and settle scores.

I adore crushing my opponent and gaining my advantage ... there is no greater pleasure for me. All the time you hear people say: “A good deal is one in which both parties win.” Bullshit! A cool deal is one where you, not your opponent, wins. Crush your opponent and get something for yourself - that's the point. In negotiations, I like to play for an all-out victory. ”

Everything is clear, is not it? Has Trump changed his habits by turning from a businessman into a head of state? It is clear that in foreign policy he professes the same principles. “A great deal is one where you, not your opponent, wins.” What do you think, dear reader, what instructions did the US Special Representative for Ukraine, Mr. Walker, receive? Looking for a compromise? Or "crush your opponent and get something for yourself"?

Trump most likely wanted to improve relations with Russia, not because he likes us more than the same neocons. No, it was a manifestation of pragmatism. He did not want to spend forces and funds on the imperial foreign policy, because his goal is to re-industrialize the United States in order to keep up with rapidly developing China. His task is to concentrate the energy of the nation on the modernization of the country. He believes that such insignificant things, like who rules Moscow, should not distract from much more important matters. To improve relations with Russia meant for him to neutralize our country as a source of problems that distract from the strategic goal.

Did not work out. The President of the United States, in contrast to Russia, is only one of the elements of the system of foreign policy formation. The rules of the game were established a long time ago, and the attempt to change them failed. As a rational businessman, Trump decided that it was more profitable for him to play by the established rules. Russophobia so Russophobia! What's the difference!

The “hot war” of the USA against Russia is now impossible. In America, they understand this. However, they are patiently waiting for our mechanical engineering and science to be completely degraded. And there are grounds: the next budget cuts show that the problems of maintaining defense capability still persist. In 2018, our military spending will be 46 billion dollars. And in the United States - over 700 billion. The difference is more than 15 times!

The Americans are able to wait patiently, if necessary for decades, until their main adversary is weakened, so that at the right moment to strike a decisive blow. Now the edge of the attack is directed to the economic sphere. In addition, the law on sanctions, adopted in August last year, directly affects the immediate circle of the country's leadership.

This is a particularly Jesuit strategy - to dump the head of state with the hands of those whom he raised to the heights of wealth and power. However, how many times in stories this has already happened. Suffice it to recall Tsar Nicholas II, who was not at all blown up by the Bolsheviks, but by his relatives and close associates with the active participation of the British and French "allies". So the “Russian” Alfa-Bank has already announced that it will not lend to the defense industry. Like, do not want to fall under the sanctions. There are no holes in the ship's hull yet, but the rats have already run ...

At the same time, it will be very difficult to raise people in their defense by shouting “the enemy on the threshold”. The “cleansing” of Russian oligarchs who plundered public property and hid money abroad, will be perceived by society more likely with gloating. It is unlikely that there are many who want to sympathize with the predators that even larger animals want to devour.

The experience of bankers who have lost cheap loans in the West, the suffering of oil and gas companies due to blocked access to the latest technologies is unlikely to affect the feelings of the ordinary citizen, faced with the problems of daily survival. However, the threat looms not only over the oligarchic bankers, but over the whole of Russia. How to act in this situation?

There is nothing new in trying to isolate our country. The USSR has undergone a total boycott since its inception. So what? Not just survived, but also created a powerful army, industry, science.

And now we are able to fend off sanctions by returning billions of dollars (six trillion rubles) from US banks to 100 and reviving our once mighty industries. But first, Russia must be firm in its relations with America. Such noble gestures, like inviting the children of US diplomats to the Christmas tree in the Kremlin in response to the expulsion of dozens of our diplomats and their families for the United States, are a sign of weakness. There it is perceived as a signal for the continuation and intensification of pressure on Russia.

Read what a very knowledgeable American writes to this account: “The excessively cautious diplomacy of Russia only increased the likelihood that Washington will understand it wrongly. Without accepting the requests of Ukraine’s breakaway Russian provinces to reunite with Russia, the Russian authorities are opening up the way for Washington to provide military means to their Ukrainian puppets in their attempts to seize these provinces. If these attempts succeed, the prestige of Russia will be damaged, and Washington will receive a new impetus for aggressive actions. Sooner or later, Russia will be forced to stand up and fight. Russia's premature proclamation of victory in Syria and the withdrawal of the Armed Forces from that country provided the United States with the opportunity to remain in Syria and attempt to renew its efforts to overthrow the Assad government. Russia should defend its victory. If Russia does not do this, then it will induce Washington to more aggressive actions. ”

Do you think it was written by one of the few American Russophiles? No matter how wrong! This is Paul Roberts - a representative of the very American aristocracy, a former deputy finance minister in the Reagan administration, the author of such influential publications as the Wall Street Journal, Businessweek, Washington Times. Actually, in the Reagan administration there could not be others. However, Roberts is a realist and understands that frantic neocon Russophobia will sooner or later drive the country into an adventure similar in catastrophic consequences to the Vietnamese one.

Let us return once again to the attitudes of our main "partner" - President Trump: "If someone has hurt you, grab the villain in the throat. Always rush at people who rushed at you. Don't let yourself kick like a soccer ball. Always give change.

In my opinion, a good set of principles for Russian foreign policy in current relations with the Western world. When our sworn friends broke their nose in Syria, we were secretly applauded by the whole world, tired of American impudence. Strengthening the Armed Forces based on a strong economy, reviving science and industry is the simple secret of how to effectively respond to those who want to cling to our throats. Do you agree, dear reader?

Ctrl Enter
Noticed a mistake Highlight text and press. Ctrl + Enter
We are
A great interview with Sergey Lavrov: about Ukraine, Obama and IranAbout Stalin and Khrushchev
16 comments
Information
Dear reader, to leave comments on the publication, you must to register.