Erdogan: "Are there Kurds? And if I find?"

January 24 2018
20
On the eve, there were reports that the Turkish army decided to extend the military operation "Olive Branch", which began in Syrian Afrin, and on the territory of Iraqi Kurdistan. Military aviation Turkey inflicted a series of missile and bomb attacks on the positions of representatives of the combat wing of the Kurdistan Workers' Party.


When statements by Secretary of State Rex Tillerson that Turkey needed to stop the operation and withdraw its troops from the territory of the north of the Syrian province of Aleppo came from the United States, the Turkish president, known for his special eloquence, decided to take the floor. 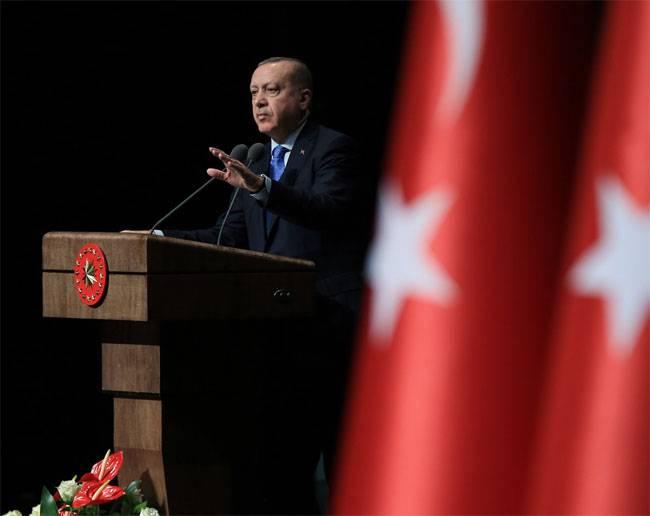 According to Erdogan, who commented on Tillerson’s statement, Turkey will complete its operation only after “order is established on the southern borders of the country”. Erdogan also noted that the operation will be conducted until the complete destruction of the threat posed by "terrorists". Turkish President calls the terrorists armed groups, consisting mainly of Kurds of the PKK. In the American interpretation, these are the military detachments of the Syrian Democratic Union (SDS), from which Washington was going to form some kind of border forces. Plans for the formation of such forces on their southern borders, as stated in Turkey itself, became one of the starting points for the start of a military operation.

Erdogan’s statements did not end with this commentary from Tillerson. According to the President of Turkey, if the US is so concerned about the need for the withdrawal of Turkish troops from the north of Syria, why have they not yet withdrawn their troops from Afghanistan and Iraq? In the United States, it seems that they didn’t say anything for 100 for the first time, regretting that they didn’t manage to throw Erdogan off in the summer of 2016.

Further, the information-disinformation fight showed itself when Kurdish resources publish photos of civilians killed as a result of Turkish attacks on Afrin, and Turkish resources in response declare that all these fakes will expose in any case.
In all this stories Special attention is paid to the position of the official Damascus. The fact is that, according to all international norms, Turkey is carrying out an illegal invasion of the territory of a sovereign state - without an official invitation from the authorities of that state. In fact, they act no more legally than the United States on Syrian soil, for whose activity a positive mandate was not issued by either the UN Security Council or the official authorities of the SAR.

Leafing through the Syrian press, one can conclude that most of the newspapers try not to cover the events in Afrin very carefully, or to issue streamlined materials about the reaction to the “Olive Branch” by other countries. No, of course, there are very unambiguous notes about the illegal invasion, but in general, as in that Internet meme, “everything is not so simple” ... Thus, the Syrian state news agency SANA publishes materials that more often do not tell about Damascus reaction to the Turkish bombing, and the reaction of representatives of other countries. For example, about the reaction of the Russian embassy in Lebanon.

Of material:
Russia's Ambassador to Lebanon, Alexander Zasypkin, expressed great concern to the Russian Federation about the Turkish aggression against the Syrian city of Afrin.

And this is another material of the same news agency: "The Egyptian Parliament condemned the Turkish aggression against the Syrian city of Afrin."

However, we are getting to the official reports on the reaction of the representatives of the Syrian authorities:
"People's Council of the UAR strongly condemned the Turkish aggression in the Syrian Afrin".

In general, the Syrian press still looks a bit confused. It is understandable. On the one hand, Turkey has carried out an unauthorized invasion, and it must be condemned according to all rules and canons. But on the other hand, the invasion is carried out on those territories that are controlled by pro-American forces, tuned in by the US special services to continue confronting the SAR government forces. Moreover, the operation "Olive Branch", initiated by Erdogan, is carried out a few days before the start of the Sochi Congress to find ways of a political settlement in Syria. And official Damascus perfectly remembers that representatives of individual Kurdish military-political groups declared their refusal to participate in this congress. Accordingly, the same Damascus, sort of like, is advantageous for the Kurds to become more accommodating. What a sin to conceal - the threads of control over the situation are as confused as possible. Damascus expects that among the allies there is a man who in fact keeps all these threads under the necessary and sufficient control.

And they count on it not only in Syria. Thus, statements about Greek information resources appeared that if Erdogan was not stopped in time, he could switch to “establishing a security zone” not only on the southern, but also on the western borders. Greek political analysts make it clear that they are worried about both the belligerent attitude of the Turkish President and some unresolved territorial issues against this background. Moreover, in Greece they remembered that not so long ago, Russia and Turkey had to “redraw” the route of the Turkish Stream gas pipeline - not through Greece, but through Bulgaria. And the revision took place a few months after the Greek authorities declared their interest in the Turkish Stream as a gas pipeline to reduce Athens’s dependence on Brussels. Are there almost no Kurds in Greece? - And if you find ...

In other words, the Greeks intimidate themselves with Erdogan’s militancy, who allegedly can take advantage of political and economic friction with Athens in order to “attack Greece after the attack of Syria and Iraq”. Moreover, if some Greek experts believe that this is utter nonsense, since Erdogan "will press on NATO allies and he will stop," then others believe that the world is such that alliances exist only on paper, and that Erdogan can "take a couple of Greek islands under its dictatorial wing. " And, it turns out that even if this is the case, then this becomes an information precedent when it is not Turkey that is part of the EU, but the territory of the EU is part of Turkey ...

By and large, these days, the most severe contradictions in the composition of NATO for several decades are showing themselves. Representatives of the military bloc say in words about unity, but in fact it has reached the point that some openly “extinguish” allies of others in retaliation for trying to arrange a “maidan” on their territory.

Moreover, some members of NATO declare their fears of other members of an overgrown “friendly military-political alliance”. The only certain thing is that there is always a reinforced concrete argument in NATO for all occasions and even “death”: “Putin is to blame for everything, after all, it is he who is pushing Erdogan to tectonic shifts in NATO, in order to drive himself into Brussels on a white horse” ...

Ctrl Enter
Noticed oshЫbku Highlight text and press. Ctrl + Enter
We are
War in Turkish KurdistanTurkey against the Kurds. Is there a new phase of conflict ahead?
20 comments
Information
Dear reader, to leave comments on the publication, you must to register.