The breakdown of the hegemon. The Pentagon has officially declared itself a "wimp"

January 24 2018
29
The US National Defense Strategy 2018 of the Year, openly made public by the Pentagon, is only a brief retelling of the main document, addressed to the broad working people, analytical and conspiratorial masses. The true document is under lock and key, I mean it is classified. From the abbreviated version it becomes clear that the current United States considers itself systemically "weakened." The text has a term like anatomical: “strategic atrophy”. What happens to the hegemon? Can not collect the remnants of the forces? 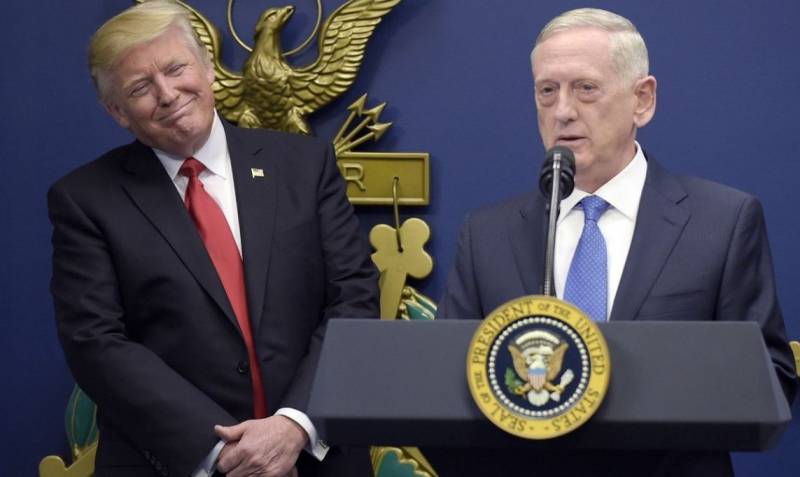 The US National Defense Strategy in short form is available at this network address. The brief document is actually not so short. Therefore, we will offer readers its basic positions.

The permanent mission of the US defense department is to provide the necessary combat power to curb war and protect the security of the American people. If a deterrence strategy fails, the combined forces will be ready to win the war. This is stated in the introduction to the new Strategy.

The Pentagon provides military force for the US President and US diplomats to “negotiate from a position of strength” using “America’s traditional diplomatic tools.” Quotes are not without reason - that is what the document says.

Then it suddenly comes to American weakness and even "atrophy." However, such a sad and pessimistic message is accompanied by optimistic notes.

“Today we are leaving the period of strategic atrophy,” the military wrote, “realizing that our military competitiveness, our advantages have been destroyed. We are faced with a growing global chaos, characterized by the weakening of the old world order based on certain rules and creating a more secure environment to this day than all that we have recently observed. ”

“For decades, the United States has enjoyed an undeniable, if not dominant, advantage in every field of operations. We could deploy our forces whenever we want, place them where we want, and act as we wish. Today, every sector is contested, be it airspace, land, sea, space or cyberspace, ”says the text of the Strategy.

Having assured the world of its “strategic atrophy” and also that the Pentagon will get out of there over time (no specific dates are set or they are kept secret), the American military machine lists its fierce enemies scattered around the world.

Enemy number one - "interstate strategic terrorism." The fight against it is named in the document "the main task of US national security."

Enemy number two has a proper name: China. This state is a "strategic competitor using a predatory economy to intimidate its neighbors in a period of militarization." Particularly indicated on the South China Sea.

Enemy number three also has a proper name: this is Russia. She violated the principle of the inviolability of the “borders of neighboring states” and wants to get economic and diplomatic power “over her neighbors”. According to the authors of the Strategy, Russia also seeks to "destroy the North Atlantic Treaty Organization" and change the situation in the field of security and the economy of Europe and the Middle East "in its own favor." Moscow uses "new technologies to discredit and undermine democratic processes in Georgia, the Crimea and eastern Ukraine." In addition, the Russians are "expanding and modernizing the nuclear arsenal." All this is enough, the authors of the document note to summarize: “the problem is obvious”.

The fourth enemy is North Korea. She stands “outside the law” and continues “reckless rhetoric”, despite “condemnation and sanctions from the United Nations”.

The fifth enemy of the United States is Iran. He "continues to spread violence" and remains a state that throws "the most significant challenge to stability in the Middle East."

The sixth enemy is the remnants of the terrorists of the “Islamic State” (“IS”, the group is banned in Russia). Despite the defeat of the “caliphate”, the document says, “the threat of terrorist groups” remains high. The American military "very likely" admits that the IS will continue to "kill the innocent and threaten the world" and will do it "even more widely."

Such an impressive list of enemies led American defense strategists to the following conclusion.

The security environment is becoming "increasingly complex." It is determined today by “rapid technological change” and the existence of a “continuous armed conflict”. In this environment there is no place for “complacency,” the Pentagon points out. The US "must make difficult choices and prioritize," highlight the "most important." The US military has no right to lose!

The “Unclassified Overview”, as defined in the document, displays a number of fundamental principles of the 2018 National Defense Strategy of the year.

Americans must "compete, restrain and win" in the current difficult environment.

Long-term strategic competition, rapid and uneven development of technology, new concepts of war and rivalry now cover the whole range of conflicts, which requires the creation of joint forces corresponding to the new reality. The Pentagon proposes the introduction of a "more deadly" force, sustainable, innovative and collaborative, which implies the actions of not only the US Army, but also the forces of "allies and partners." It is this scheme that “will support American influence and provide a favorable balance of forces that will protect a free and open international order”. All of this together and subject to the modernization of the forces will ensure "the preservation of peace through power."

But this will require "costs." Rejection of such power and expenditures on “protection” will lead to “a reduction in the global influence of the United States, erosion of the cohesion of allies and partners” and other troubles - up to squeezing the United States out of the markets, which will result in a decline in American “welfare and living standards.”

The authors hope that the "investment" in the US military industry will be "stable" and certain. Military forces must be upgraded and ready for battle. They must conform to the spirit of the times, otherwise the United States "will quickly lose its military advantage."

In short, the creation of a united force should ensure the full “protection” of the American people.

These theses are very similar in their spirit to the party slogans of the days of the aged General Secretary Brezhnev. But, in contrast to the communist slogans of Moscow, through the Pentagon Strategy shines through the true spirit of American charity: money, money, and again money. Without "costs" there is no "protection"; without "modernization" there will be no "technology" and "gain" - neither in wars nor in economic competition. Even in diplomacy there will be defeats, for the power of American diplomacy is provided by military force. So it is accepted in American politics. And not only in it. The Soviet Union, whose slogans were mentioned above, also had considerable military power and was able to reinforce its point of view with the presence of modern weapons and nuclear arsenal.

The impression is created that the Pentagon needs to mention the “period of strategic atrophy” exclusively in order to officially demand even more cash infusions into the military. For this purpose, numerous enemies are enumerated that constantly “squeeze” the United States from somewhere - now from the Middle East, now from world markets, now from the South China Sea.

It is these enemies that are marked by the perpetrators of the weakening of the “world order” that the United States liked so much and which has now reeled everywhere - from the Middle East to Europe and separately taken by Ukraine and Russia. But the Pentagon’s military do not indicate in their document what kind of forces contributed to the “Arab spring” in North Africa and the Middle East, who welcomed and supported the coup d'etat in Ukraine, who imposed sanctions against Russia and who finally stifled the DPRK sanctions, threatened Pyongyang from the world tribune. There’s nothing to say about Iran - after Obama’s diplomacy, Mr. Trump took yes announced Iran as a sponsor of terrorism.

The entire course of the current administration of the White House is pure confrontation. With regard to the buildup of the arms race and the development of the military-industrial complex, this confrontational course is largely copied from Reaganomics. Whether it will lead to economic and competitive success is another question. At the time of R. Reagan, the American economy was still really American, and not moved to China. Today, such centers of power have manifested themselves, which under Reagan simply did not exist: they were only in their infancy. And to turn them into enemies, scattering them in paragraphs of the "defense" strategy, is the height of the stupidity and the very complacency that Pentagon experts dismiss.

Observed and commented on Oleg Chuvakin
- especially for topwar.ru
Ctrl Enter
Noticed a mistake Highlight text and press. Ctrl + Enter
We are
Situational analysis of the death of the MH17 flight (Malaysian Boeing 777), made on the basis of engineering analysis from 15.08.2014US National Security Interests and American Values: Primary and Secondary
29 comments
Information
Dear reader, to leave comments on the publication, you must to register.