January 24 2018
43
Through the efforts of the Ukrainian junta and its warriors soon every day in the Donbas will be a mourning anniversary .... Three years ago, on January 22, 2015, Ukrainian shells landed on a trolleybus that approached the Donetskgormash bus situation in the district of Bosse, Leninsky district. Then eight people died and 26 were injured.


This date is remembered in Donetsk every year. So this time, the head of the Donetsk People's Republic laid flowers at the memorial, which was installed at the site of the shelling. Together with him about two thousand people came to the memorial event. This massacre then greatly shook the Donetsk people, so every year thousands of people come to worship those whose life was so tragically cut short ... 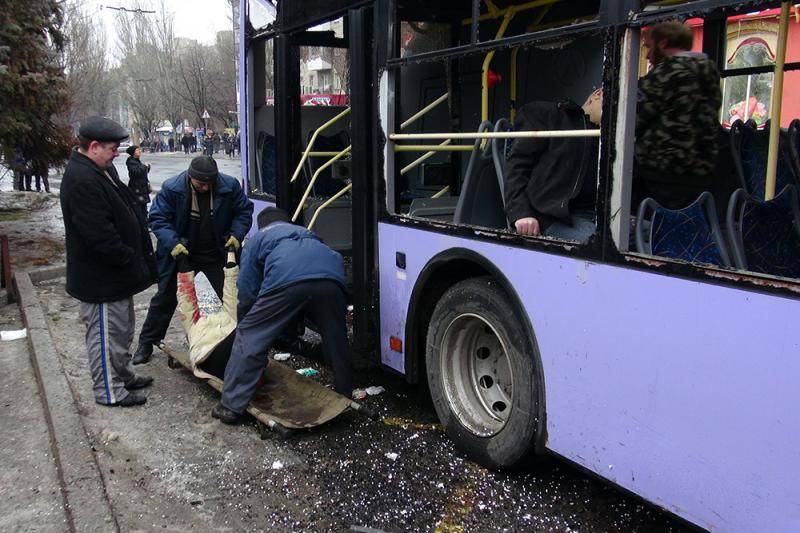 And right on that day, when they remembered the victims of the tragedy three years ago, - the Armed Forces of Ukraine brought artillery strikes to the city of Dokuchaevsk. Five civilians were injured. And on the eve of January, 21, in the “gray zone” in the Elenovka area, as a result of the shelling of a passenger bus, one person was killed, another one was injured.

The authorities of the DPR intend to send a request to the OSCE monitors to investigate the killing of a civilian and punish those responsible. According to the deputy commander of the operational command of the Republic, Eduard Basurin, the shelling of a bus near Yelenovka may have been carried out by the 93-th separate mechanized brigade of the Ukrainian Armed Forces. Basurin added that the Ukrainian media could blame the crime on ... the military of the Donetsk People's Republic. Really, after each similar crime in Ukraine, the DPR is accused of “self-shelling”. So it was after the death of eight people at a bus stop in the neighborhood of Bosse. And many, many more times.

No wonder the head of the Republic, Alexander Zakharchenko, argued that the law on the so-called "reintegration" of Donbass "would allow unleashing the hands of the Ukrainian military." "Ukraine is going to fight and creates for this a legal platform", He said.

Indeed, the bill that Mr. Poroshenko submitted to the Verkhovna Rada was considered and generally adopted on January 18. And almost immediately after that - already two crimes: shelling of the bus in Yelenovka and residential areas of Dokuchaevsk.

According to this “document”, Russia is officially declared an “occupier”, and the authorities of the DPR and the LPR are called “occupation administrations”. From the bill blows hatred and to the People's Republics, and to Russia. Under the guise of reintegration, it is assumed that Donbas will force its will. Actually, this imposition has been going on for almost four years, and from here comes the numerous tragedies of ordinary citizens, including the one that occurred at the bus stop in the Bosse housing estate, as well as the recent death of a person near Yelenovka.

However, with this bill is not so simple. In the Verkhovna Rada there were three courageous deputies from the “Opposition bloc” (Alexander Vilkul, Yury Boyko and Mikhail Papiyev). They submitted for discussion a draft resolution implying the annulment of the decision on “reintegration”. Now, according to the rules of the Verkhovna Rada, the signing of the law by the speaker of the parliament and submitting it to Mr. Poroshenko for signature is postponed.

Of course, this delay is not for long - only until the beginning of February. In order to withdraw the “reintegration” bill, it is necessary that 226 deputies vote for the ruling on this. In the Verkhovna Rada so many sensible, sober-minded people with civil courage, simply can not be found. However, we can say thanks to those people who are still trying to stop the escalation of the conflict and attempts to unleash a hot phase of the war (if people are dying now - you can only imagine how many will die if the insane power of Ukraine decides on full-scale hostilities). Regardless of whether it will be able to do it or not, these deputies certainly deserve respect ...

The fact that many residents of the DPR and the LPR in the case of this pseudo-integration (and in fact - the occupation) is waiting for reprisal, no doubt. Politicians, journalists, political scientists, public figures of Ukraine, who consider themselves “patriots”, “Svidomo” (conscious), have completely abandoned any, even ostentatious, intellectual husk and openly demand blood. Supporters of the Republics are accused of the so-called “collaborationism”, “collaboration with the militants”. Even for magnets with the symbolism of the DNI, neo-Nazis are ready to destroy people.

It is symbolic that Poroshenko, speaking at the "Day of the Unity of Ukraine", for one second said the absolute truth: "The joyful holiday of the Day of Unification will be for Ukrainians with a bitter taste, while the boots of the Ukrainian invader ... the Russian occupier tramples our Ukrainian sovereign land».

Yes, the truth he said “lasted” only a moment - he immediately recovered. But precisely withapogs of the Ukrainian invaders trample the land of Donbass, where the people in the 11 May referendum 2014 of the year clearly expressed their will: to create a Republic independent of the Bandera junta, which came to power through a coup d'état. Part of this land remains under the control of the Armed Forces of Ukraine and the punitive battalions, and there the “Ukrainians” are implanted with fire and sword. And those cities and towns that could not be brought to their knees are subjected to artillery strikes and without any “reintegration” law. It can be expected that with the adoption of the law of blood will spill more - even if a full-scale war does not start, shelling will intensify.