January 24 2018
47
Nowadays shooting weapon going through hard times. In the international market, there is a constant increase in competition with a shortage of truly fresh, new ideas. It would seem that mankind has gone a long way from the moment of the invention of gunpowder to the creation of modern models of small arms, having already made all the available discoveries and introduced all the advanced technologies. However, progress does not stand still, and small arms, especially military ones, will gradually continue to evolve.


The development of promising models of small arms are engaged today in many countries, while often the design of a new weapon resembles samples from science fiction films. The same can be said about the development of Canadian engineers who are working on the future assault rifle. New small arms are created in the framework of the so-called SIPES program - Soldier Integrated Precision Effects Systems (integrated high-precision destruction system). Work on this program in Canada has been going on for more than 10 years.

Increased shooting accuracy, high firepower and development integrated electronics, which is designed to provide communication with command and combat control networks - these are the main features that are inherent in the conceptual model of the new Canadian assault rifle. DRDC - Defense Research and Development Canada (Canada’s defense department of research and development) and Solt Canada are working together to create the weapons of the future in Canada. 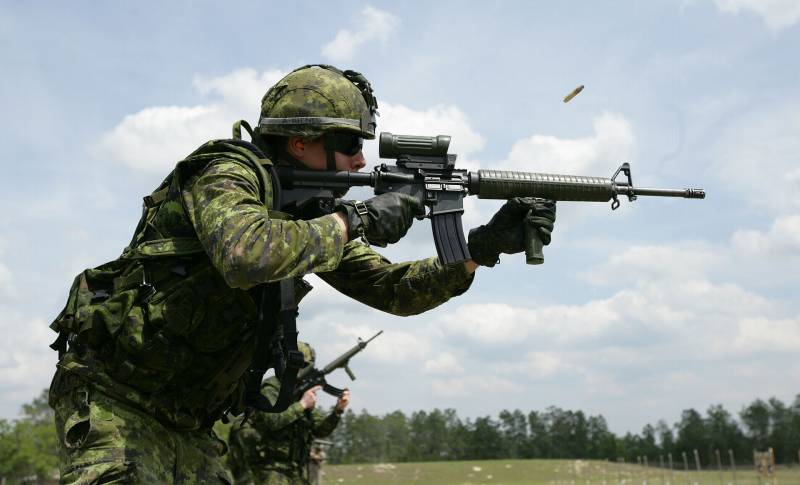 Canadian Soldier with Colt C7A2 Assault Rifle
The company Solt Canada before 2005, was known as Diemaco. Today, it is not just a manufacturer of licensed copies of American small arms, mainly rifles based on Armalite AR-15. The company created the С7 assault rifle (similar to the American M16A1E1) and the С8 carbine (the analog of the American Сolt 653 M16A1 Carbine). These models had a number of differences that were associated with the specifics of the use of small arms in the Canadian armed forces. In addition, based on the experience gained by the Canadian military during the war in Afghanistan, their automatic rifles received a number of improvements. For this reason, a number of NATO countries (Great Britain, Denmark, Norway and the Netherlands) preferred the Canadian design to the American original. Most likely, the main role was played by the best adaptability of С7 / C8 models to difficult, unfavorable climatic conditions of operation, primarily in the northern regions.

Over time, the company Solt Canada began to engage in their own development of weapons. The specialists of this weapon company created the 40-mm EAGLE hand grenade launcher, the original LSW light machine gun based on the M16 assault rifle and the new modular MRR assault rifle. Solt Canada is based in Ontario, near Toronto, innovation is not an empty sound for it. At one time, Diemaco, which turned into Solt Canada, was a subsidiary of Héroux-Devtek, specializing in the production of various components for the aerospace industry. The most important achievement of Heroux-Devtek was the creation of a high-tech chassis for landing the lunar module Appolon-11. So COLT Canada has a rich technical heritage and tradition.

It is worth noting that the Canadian development corresponds to the accepted ideas about the appearance of promising automata and the possible directions of their development, which in 2016 was voiced by Mikhail Degtyarev, the chief editor of Kalashnikov magazine, in an interview with Lenta.ru. According to him, it is difficult to wait for something fundamentally new in the market of assault rifles without creating fundamentally new ammunition for them. A possible direction of development, he called bezgilzovye cartridges, as well as the use of gas or liquid propellant as a charge. He also believes that in the future weapon systems may appear with other methods of charge initiation, for example, with a non-mechanical cap, and electro-initiation. 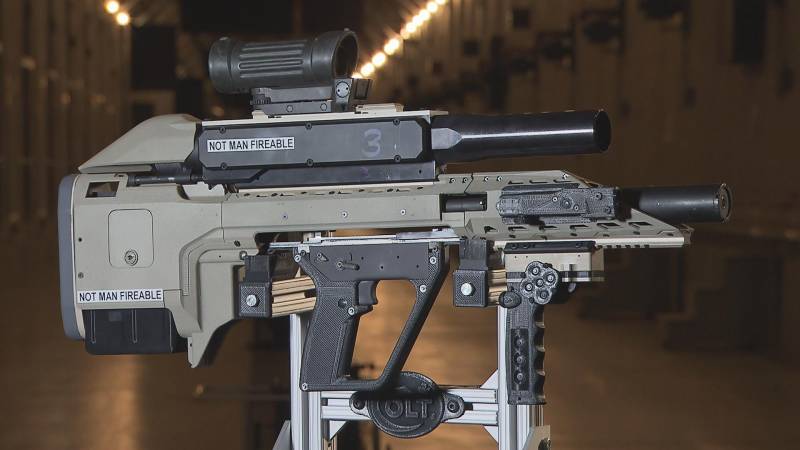 A prototype of the Canadian rifle of the future, presented by the DRDC in February 2015 of the year
At the same time, Degtyarev called the use of guided ammunition in relation to hand-held small arms unlikely, calling it an insanely expensive idea, even if one just conducted experiments in this direction. According to him, in the near future in the world one should expect the appearance of new assault rifles, which are turning into weapon complexes with new grenade launchers integrated into the design. Who can get new intellectual ammunition. According to Degtyarev, in a grenade launcher caliber one can already afford to consider various systems of explosive ordnance: contactless, remote, with a programmable fuse and others.

A promising assault rifle being built in Canada is already in something that meets the voiced criteria. She will receive an integrated 40-mm grenade launcher and a new ammunition. The weapon was originally developed specifically for the telescopic cartridge. New small arms are created in Canada as part of an integrated weapons platform known as System of Systems (literally “system of systems”). It is being developed for the Canadian Armed Forces and includes in addition to the fighter’s individual weaponry also communications, navigation, ballistic protection, power supply, command and control, as well as a helmet system, a sensor system (including a micro drone) and a transport system, related to each other by personal network.

Work on the new assault rifle carried out directly under the program SIPES, which was mentioned above. They began in October 2007 of the year and are also known as SARP II - Small Arms Replacement Project II (small arms replacement project, second stage). In the framework of this project, in the period from 2012 to 2022, the year in Canada should be created a new modern small arms, which will be integrated into the new system of combat equipment. It is assumed that the new assault rifle will be able to hit both the enemy's manpower (including a non-lethal option) and its equipment using new ammunition. It is worth noting that Canadians do not spare funding for the development of new weapons. The total cost of the SARP II project is estimated at more than one billion dollars. As a base platform for prospective small arms, several manufactured samples are considered, including the FN SCAR, Beretta APX-160, as well as the FN P90 and PDW HK MP7. 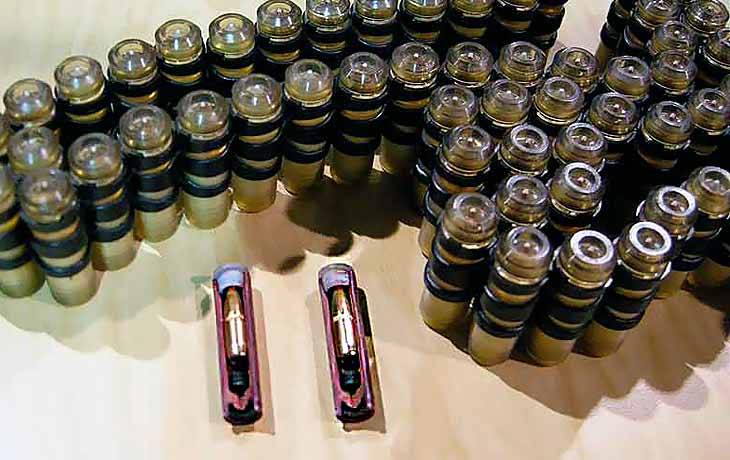 5,56 caliber mm telescopic cartridges
As part of the SARP II project, Canadian engineers plan to achieve the following goals:
- increasing the rate of fire;
- ceramic barrel;
- a bed with a metal matrix obtained by injection molding;
- modular design of weapons with the ability to easily change the caliber;
- equipping weapons with a set of software-controlled sensors;
- The use of telescopic ammunition of a new caliber (Canadian engineers are considering both sleeveless and cartridge cases);
- the use of high-energy nano-powder;
- use of bullets with a segmented core;
- the use of environmentally friendly ammunition;
- optional action of ammunition on the target - lethal or non-lethal;
- wireless communication, working in real time with other components of the combat system;
- Plug-and-Play architecture, operating via Ethernet;
- interface bus for data and energy;
- the presence of radio frequency (RFID) or biometric identification systems on the weapon;
- implementation of an unconventional aiming system in practice, which should include a target identification system, a modular fire control system, an automatic tracking and firing system for the selected target in motion, a SWIR / LWIR night sight (combining the properties of a thermal imager and an IR sight), and power supply independent of the weapon.

A number of the listed technologies have been successfully implemented in modern realities and are applied in practice, but the full list of goals is truly impressive and able to impress the imagination. Especially, taking into account the fact that Canadian engineers set themselves the goal to realize everything conceived at least in the form of existing prototypes, that is, weapons that will be embodied in the metal. At the same time, the adoption of a new system or its components is out of the question; the developed demonstrators of new technologies should become the basis for the creation of new full-time systems of small arms. 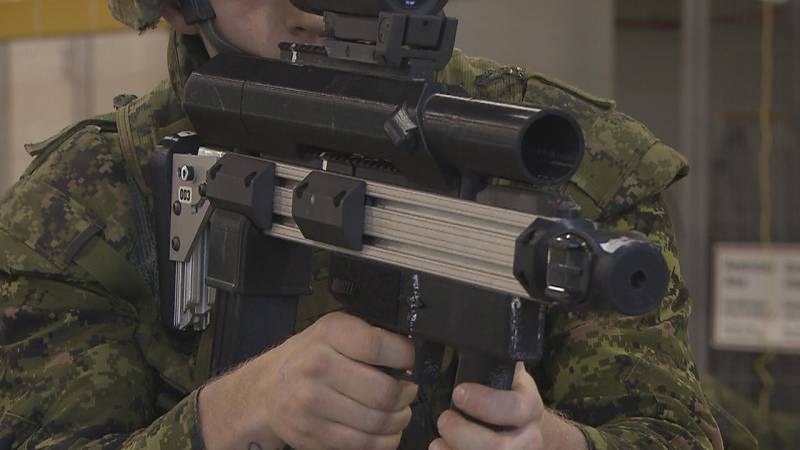 It is worth noting that every day fantasy is getting closer to reality. In February, the DRDC 2015 held a presentation that included a press release, several photos of the future rifle and a video. In this case, it is not even about an assault rifle, but about a full-fledged rifle-grenade launcher complex. Already then it was emphasized that one of the main tasks facing the developers was to reduce the weight of the weapon. To this end, Canadian engineers used several types of lightweight materials, and also minimized the weight of those nodes that are made of steel. In the end, it turned out that a fully equipped prototype of a new weapon weighs less than a serial Colt C7 assault rifle, equipped with an M203 rifle grenade launcher. This rifle is currently in service with the Canadian army.

The use of new telescopic cartridges plays a role in reducing the weight of the new weapon. In case of a sleeveless design, this ammunition is a bullet that is completely or partially covered with a layer of highly effective powder substitute. In order to determine the possibility of using such cartridges, the creators of the new rifle had to carry out detailed tests, during which the safety and stability of cartridges for a long time, as well as the absence of negative effects caused by their aging, were checked.

Studies that accompanied the creation of a new rifle, and affected the process of developing new technologies for automatic search, capture, tracking and subsequent destruction of targets. As part of these studies, a number of specialized software algorithms and sensors were created that provide for the use of weapons in almost all typical situations that may arise during hostilities. It is assumed that in the near future a new Canadian rifle will also be able to independently fire at the targets being accompanied. This is planned to be achieved through the introduction of technologies similar to those of the American company TrackingPoint. 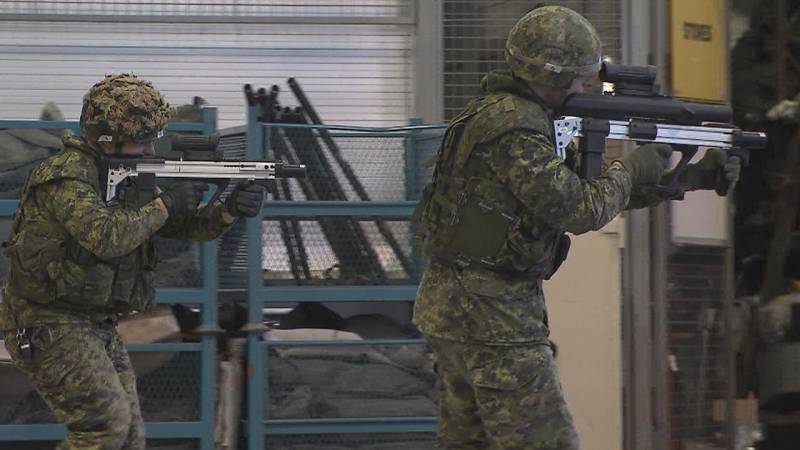 Presented in the photographs and video rifle made in the layout of bullpup, in which the trigger is carried forward and is located in front of the store. Today, this scheme is quite common for small arms in NATO countries. The rifle caliber is 5,56 mm, while the weapon has a rate of fire regulator that allows you to adjust the rate of fire in a wide range. As an additional weapon, an 40-mm grenade launcher with three grenades located in a round drum or a shotgun of an 12 caliber can be easily mounted on a rifle. It is reported that the grenade launcher will be able to use smart ammunition. The easy integration of the grenade launcher and the place for its installation allow us to speak about a full-fledged rifle-grenade launcher complex.

According to the developers, the new assault rifle will be a flexible weapons platform that can be used in any environmental conditions and in any theater of operations from hot deserts and arctic snow to dense urban development. It is known that the first prototype of weapons created in the framework of the SARP II project was tested by firing from a machine tool, and also passed ergonomic and operational tests at Canadian military bases, which suggests that this project definitely deserves close attention, at least sides of weapons industry and military specialists in many countries of the world.

Ctrl Enter
Noticed oshЫbku Highlight text and press. Ctrl + Enter
We are
TrackingPoint introduced a line of self-loading riflesAccurate air discharge
47 comments
Information
Dear reader, to leave comments on the publication, you must to register.