The dogs of war are returning 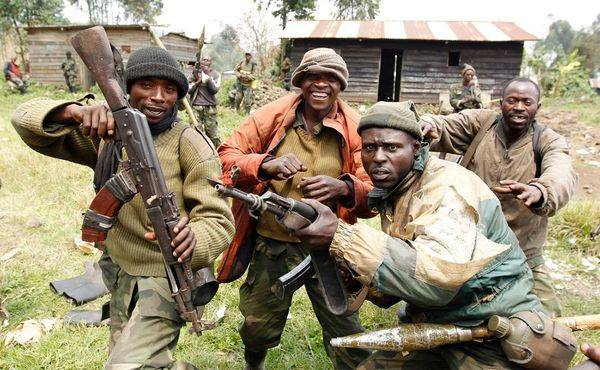 Just before the New Year, there was an attempt at a coup d'etat in Equatorial Guinea, a small but very oil-rich (third exporter of oil on the continent) state in Central Africa.

According to the country's security ministry, approximately 30 people penetrated into the territory of Equatorial Guinea from Cameroon in order to carry out a series of attacks on government structures, provoke riots and overthrow the government of President Obiang.

Nobody will surprise anyone with reports of state coups in Africa. But even for Africa, such a number of attempts (albeit unsuccessful) coups, as in Equatorial Guinea, becomes simply indecent. Only in the 2000-ies there were already three. In 2004, a group of mercenaries commanded by a graduate of an elite university and a former British special forces member Simon Mann were arrested in Zimbabwe in preparation for their flight to Equatorial Guinea. One of the organizers of the coup attempt was Mark Thatcher, the son of former British Prime Minister Margaret Thatcher. In 2009, a group of armed men (they were hired thugs from Nigeria) attacked the presidential palace in the capital Malabo by boat, but this attack was repulsed and the detachment of the attackers was defeated.
And here is the third attempt in December 2017. True, this time the mercenaries were not elite British paratroopers who served as bandits, but a mob hired from among citizens of the Central African Republic, Chad and Sudan.

It must be said that attempts to overthrow the power in the republic were also noted in the twentieth century. Equatorial Guinea even became the prototype of the fictional African country Zangaro in Frederick Forsyth's famous Dogs of War.

However, if we compare the information on coups in different countries of the world with what is known about attempts to overthrow the regime in Equatorial Guinea, one feature will be evident. In most other countries, local personnel dissatisfied with the ruling regimes are performers of coupd'etat. In Equatorial Guinea - exclusively foreigners.

This is not to say that all the citizens of Equatorial Guinea are crazy about Obiang and do not want any changes. It does not happen. But this is to the fact that the degree of discontent with the government (as it is in any state) here clearly does not reach critical values, when people are willing to risk themselves for the overthrow of power.

Then to whom and what did not please Equatorial Guinea, more precisely, the regime ruling there? All the laments of human rights activists about the unfortunate Equato Guineans, who live on two dollars a day, are not worth a damn and are meant only for housewives sitting at TV sets. The fact is that all the arguments of critics are smashed to smithereens only about two facts that even the most stubborn fighters against the Obiang regime cannot deny. Here are the facts.

The average salary in Equatorial Guinea is 1000 dollars per month.

Equatorial Guinea does not supply refugees and illegal migrants to Europe. On the contrary, it is in Equatorial Guinea that tens of thousands of people from Africa and China come legally and illegally to work. There are even visiting Spaniards who cannot find work at home and are looking for a better life in their former colony.

Who does not know, Equatorial Guinea was formerly a colony of Spain. In 1968, the Spaniards left the poorest country in Africa, but already in the middle of 1980, they found so much oil here that they called the republic the second Kuwait.

According to Malabo, Equatorial Guinean Foreign Minister Agapito Mba Moku has already said that the failed coup attempt is an “international terrorist act” because terrorists and mercenaries from different countries who could be financed by citizens of other countries were involved in the incident. Those who wish to redistribute a Guinean pie will in no way give up attempts to join the country's oil riches. In this case, a direct threat is created to the interests of a number of international, primarily American companies, from the first days after the “discovery of oil” operating on the Guinean shelf.

As well as Chinese, Moroccan, Egyptian and French companies engaged in large-scale infrastructure projects in Equatorial Guinea. The organizers of the coup attempt could have been aimed at the CEAL (Central African Monetary and Economic Community - CEMAS), which, in addition to Equatorial Guinea, includes Cameroon, the Central African Republic, Gabon, the Republic of the Congo and Chad, and is one of the most effective integration alliances on the continent . It was not without reason that immediately after the reports of the incident occurred, the delegations of all the indicated countries began to arrive in Equatorial Guinea, which unanimously expressed solidarity and support to President Obiang. The concern of African leaders is understandable. Someone wants to see Africa still weak and fragmented, and its wealth - reliably picked up.

Ctrl Enter
Noticed a mistake Highlight text and press. Ctrl + Enter
We are
List of destroyed the largest and most high-tech enterprisesMilitary reform as an integral part of the security concept of the Russian Federation: Systematic dynamic assessment
23 comments
Information
Dear reader, to leave comments on the publication, you must to register.