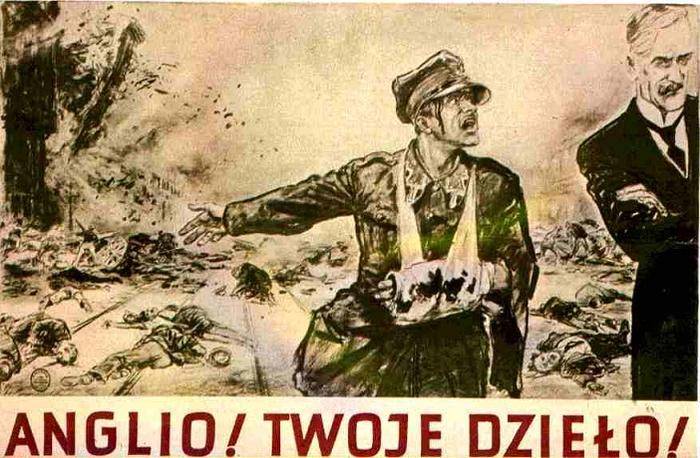 Amazing in stories tragedy is repeated in the form of farce. In 1939, the Poles issued a poster accusing England of treason. Indeed, the declared war of Hitler Germany was a formality, rightly called the "strange war". And now, after almost 80 years, England again "betrays" Poland. Now, having left the EU and ceasing to feed the Poles both with jobs on their island and with funding from European funds.

Winston Churchill, the former British prime minister during the Second World War, wrote a lot of frank information about Poland and the Poles. In particular:

There were always two Poland: one of them was fighting for the truth, the other was groveling in meanness

The modern Poland assembled from patches was glued together by the whole world - the Western European countries after the First World War as the antipode of Bolshevik Russia and, in part, of the defeated Germany. The Soviet Union, after the Second World War, as an ally against all of the same Germany that lost all again, and its own allies in Europe, who quickly became enemies.

The Poles themselves remained all the time in the trend described by Churchill:

Poland developed rapidly and dynamically, turning into an exemplary country that came to the European embrace from the "communist torture chambers". To date, Warsaw shows the best performance among the latter-day members of the European Union. Which does not spoil either the millions of Poles who left the country (according to official data, 2 million by 2013), nor the several million local migrant migrant workers who have left the collapsing Ukraine who have left.

The Polish authorities, always successfully exploiting both Polish arrogance and Polish nationalism, resolutely "grabbed God by the beard" and began to build the most formidable, independent and mono-ethnic state of the European Union. Within the framework of this great goal, Polish legislation was reworked, brakes were lowered or EU requirements were placed on the shelf, which prevented the Polish authorities from pursuing their chosen policies, fanned the flames of nationalism. Which, in addition to traditional Russophobia, has received as fuel and immediate neighbors.

Hidden and not very claims to the Vilnius region constantly hamper any economic projects with Lithuania. From rich Germany they suddenly begin to demand additional payment in the form of reparations for the damage inflicted on World War II, they look predatoryly on neighboring Galicia. While Ukrainian, but in fact - Polish Kresy vskhodnie. The formed team of the PolukrLit on 80 with more than one percent consists of Poles and is “ready to ensure law and order” on adjacent lands to Lviv inclusive. The massacre of Poles by Bandera is legally registered, the genocide of the Polish people is determined, the amounts of claims and reparations have not yet been announced, but the “process has begun”, lawsuits on the seizure of land and property in Galicia are being prepared, numerous lawsuits are on the way.

But the land and financial claims of Poland are quite understandable, if an unbiased look at what is happening from the outside. And it's not the story. There are so many centuries of wars between the same France and Germany that it’s impossible to pick up all the stumbling blocks. Nevertheless, they live without hysteria at the interstate level.

Claims on “Wielkopolska”, on overseas colonies (it was like that), on the lands of neighbors and their wallets, are partly determined by the fact that for centuries, from generation to generation, tales of lost majesty and chosenness of this Slavic tribe, and partly because several generations of Poles live not only on earned money and self-created benefits.

The battles of the Great Patriotic War had not faded yet, and the trains with tractors and cars, fuel and food, clothing and building materials stretched from the war-torn Soviet Union to Poland. After the victory, similar trains have already gone from defeated Germany. From which the works of Stalin were otkushen in favor of Poland, and even a piece of territory freed from local German residents. In Poland, factories and plants were built, technologies and documentation were transferred for the production of machines, aircraft, ships, etc. For the "Polish version of socialism" the USSR paid regularly and a lot.

And then the baton from the weakened hands was picked up by the US and the EU. The Yankees paid for the protection of their interests on the European continent and the deployment of their weapons, the Europeans - for the movement, and then their stay in the European Union.

30 is a million-strong country, stretched between Old Europe and the post-Soviet states, flourished. Millions of tons of cargo rolled along both sides of Poland through roads and railways, hundreds of billions of tons / cubic meters of oil and gas through pipelines, millions of people moved. The cheaper labor than in Germany and similar countries ensured the competitiveness of local products; from the EU leveling funds, Poland received annually grants for more than 10 billion euros (more than 2004 billion euros from 100).

But that's not all. According to official data, Poland’s foreign debts as of the end of 2016 have exceeded 336 billions of dollars. It turns out that over the years of their stay in the EU, each Pole (from old man to baby) received about three thousand euros as a gift and at the same time managed to take in dollars and at the end of 2016 of the year could not return almost 10 thousand dollars. Agree that with such financial injections, people are accustomed not only to earn good money, but also to receive regular “premiums”. Simply put, this level of macro-financial assistance allows you to get more material benefits with less labor.

The finale of this life is predictable. The Poles see the EU simply as a cash cow, which has created the current standard of living for them and does not want anything more from this union. As well as from the United States-pay for Russophobia, and okay. And on the policy in relations to Cresam vskhodnym influence "not allowed"!

As a result, the contradictions between the bureaucrats of Brussels and Warsaw are gaining strength for the second year. But the fact that the EU is headed by former Polish Prime Minister Donald Tusk makes this process particularly piquant. And the Poland-EU conflict also bears obvious traces of internal disassembly. Up to the charges of Tusk that his government had blown up the plane with his twin brother Kaczynski, who now heads the leading party "Law and Justice". This is ridiculous, but on January 11, a commission of the Polish Ministry of Defense called an explosion aboard an aircraft the cause of the crash of the presidential Tu-154 in 2010 over Smolensk. That is, it is no longer any "bad Russians" out there that have done something harm, but real terrorists. And not just like that, but at least in collusion with the Tusk government, which did not prevent or even “did not notice” the explosion on board!

It should not be forgotten that already this year the Poles will elect local authorities, and next year - national - the president and the new parliament (the Sejm). And Donald Tusk’s Civic Platform claims real power.

So one should not be surprised at the words of the current European Council President Tusk, who, in an interview with Tygodnik Powszechny, said that Warsaw may raise the issue of leaving the EU if the country from the recipient of European subsidies turns into a donor.

I can easily imagine the situation when Poland will be among the net donors, then the Polish government can decide that it is time to ask the Poles if they want Poland to continue to remain in the EU

According to Tusk, the current leadership of Poland “at least does not perceive with enthusiasm the country's membership in the European Union.
Britain’s withdrawal from the EU and the departure from the “leveling policy” already announced by Brussels makes Donald Tusk’s prediction reasonable. Already from 2020, Poland can turn into the same donor as Germany with France. But the Poles will never feed the same Lithuania - Polish arrogance will not allow.

And therefore, the gap within the EU will grow and spread, including with the active participation of the Polish leadership.

Ctrl Enter
Noticed oshЫbku Highlight text and press. Ctrl + Enter
We are
Polish claims to Ukraine. Will Warsaw decide to “bite off” Galicia?The tragedy of the American army ("The Atlantic", USA)
35 comments
Information
Dear reader, to leave comments on the publication, you must to register.