Results of the Russian operation in Syria: an analysis of Western analysts

January 24 2018
13
The French DSI magazine in November-December 2017 published an interesting article by Michelle Goya, “Le modele de l'intervention russe”. It is remarkable in that it represents a foreign perspective on the outcome of the Russian operation in Syria. Our blog translates this material.


Two years after the start, Russian intervention in Syria is a success, as it allowed the Syrian regime to remain in power, which was the main task, and also contribute to its possible victory [in the civil war]. It also helped restore Russia's diplomatic weight, primarily in the Middle East. This result was achieved at a relatively low price, and taking into account the means used, this operation can be considered as an operational model. 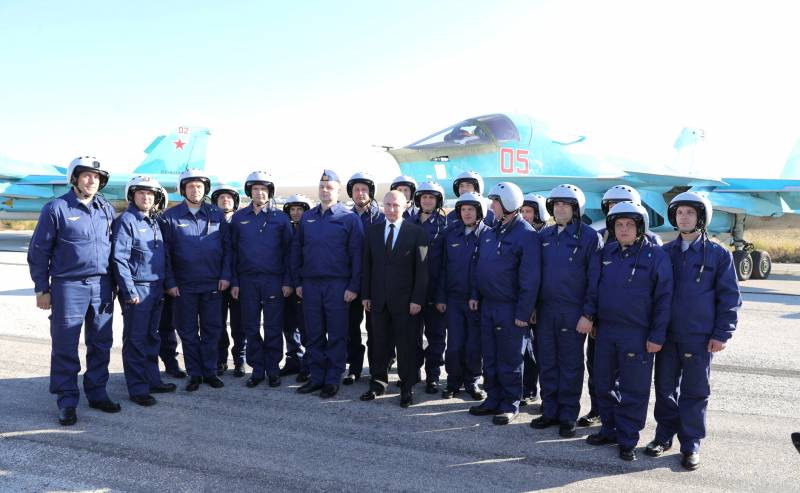 During the Cold War, the American strategy talked about the strategy of a “careless pedestrian” by analogy with a man who suddenly stops on the road, putting the driver in front of a choice between sudden braking and a catastrophic accident. Since, by definition, neither the pedestrian nor the driver wants to get into an accident, this leads to the fact that the first one stops and the second controls the situation on the road. The USSR and Russia are accustomed to such methods after the invasion of Czechoslovakia in 1968 and before the annexation of the Crimea in 2014, between which was the seizure of key objects in Kabul in 1979 or the sending of a group of paratroopers to the airbase in Pristina in 1999. The Syrian case is more complicated than the previous ones, since this time it’s not about a face-to-face collision, but there are “mosaic” hostilities that do not involve two hostile camps, but there are different goals (private or peripheral) ), and this makes this conflict at the same time difficult and long. As for the external actors, they show the intention not to collide directly. But as a result of this, the lightning-fast seizure of territory by one side automatically prevents the other, put before a fait accompli, from penetrating it. There is only one “pedestrian”, but there are a lot of drivers, which forces everyone to slow down. This “pedestrian” is the Russian expeditionary force, which was suddenly sent to Syria in September 2015. 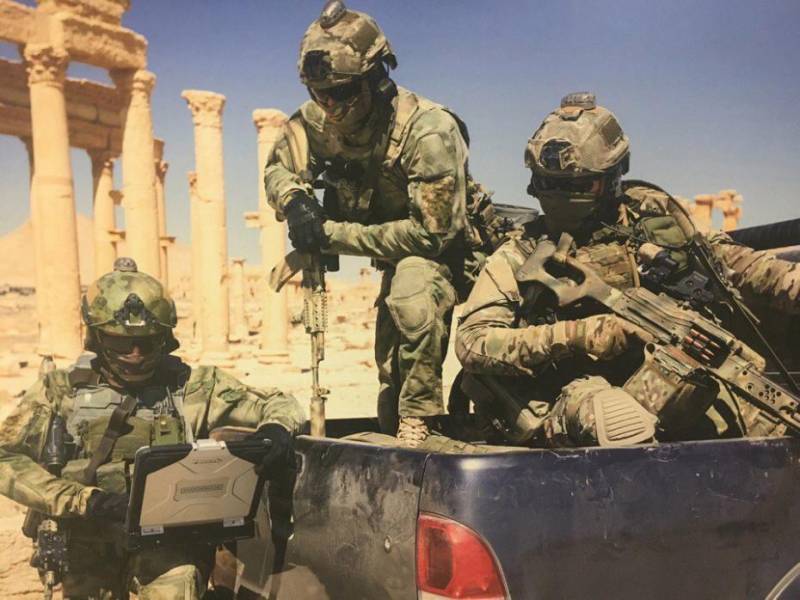 In strategic terms, the unexpected deployment of troops leads to the fact that it is already necessary to react by “jumping over” the stage of public negotiations with the Parliament or the UN Security Council. These formalities were circumvented in the summer of 2015, when the Russian executive received the right to act without prior approval in the country, referring to the cooperation agreement with Syria, 1980 of the year. From an operational point of view, this situation implies a solution to the contradiction between the approaches to the rates of participation in hostilities and the critical mass. This contradiction can be resolved due to a clearer definition of the necessary funds, and also, first of all, due to the possibility of delivering them to the theater of operations either by sea or through a long-range military transport aviation fleet, which still has order. 100 military transport aircraft Il-76 and nine heavier An-124. These capabilities, as well as the opening of Iraq’s airspace, also made it possible to immediately transfer to Syria almost everything needed for the two main tactical systems: air defense and reconnaissance and attack weapons.

The air defense systems of the Syrian army, reinforced by Russian advisers, were significantly strengthened by the transfer of more advanced systems to Syria: four Su-30M fighters (bmpd in the text), mobile Pantsir-С1 and Tor-М1 mobile systems, and first of all complex C-300F cruiser "Moscow". At the end of November, the 2015 of the year in Syria were C-400 SAMs, whose radar stations could cover almost the entire territory of Syria and a large area of ​​neighboring countries. 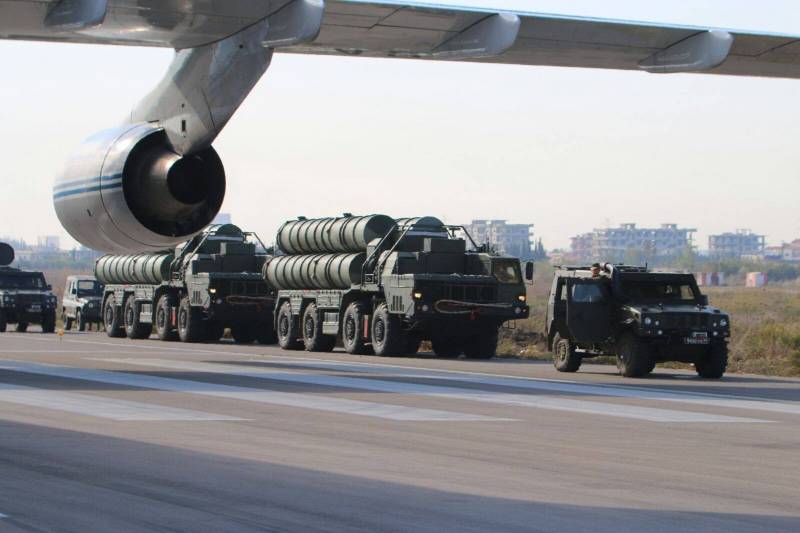 Launchers 5P85SE2 of the Russian C-400 anti-aircraft missile system at Hmeimim airbase in Syria, November 2015 of the year

There was no aerial threat from the militants. The idea was to create a “forbidden zone” for other actors, especially the United States, who were constantly suspected of planning to launch an air operation against Damascus. This did not prevent incidents. 24 November 2015 of the year the Russian plane was shot down by a Turkish fighter; in June 2017 of the year, US forces shot down two Iranian UAVs and a Su-22 fighter-bomber during the first air battle of 1999. It also did not prevent American strikes on a number of Syrian military infrastructure facilities. The ban was not complete. This zone mainly covered the main areas of operations of the regime’s forces, which allowed the American coalition to have freedom of action in its attacks on the IG in the Euphrates valley and in the east of the country. This zone also missed several strikes on protected objects, but these strikes were carried out by cruise missiles. Due to their small number and accuracy in conducting these cases, first of all, they show that the sky over Syria is still controlled by Russia, even though not a single C-400 rocket was launched.

Just like the queen on the chessboard, the very presence of modern air defense systems in the theater of theater allows us to achieve great results without even taking action. They force all actors to maintain constant contact with Russia, and, therefore, to negotiate with it.

As soon as the freedom of maneuver in the air for external actors was limited, the second direction for exerting effort was to get out of the tactical impasse. From the very beginning, the Syrian conflict was distinguished by a slow pace of development of events on earth. This was primarily the result of the weak percussion capabilities of various hostile camps in comparison with those spaces for which battles were fought and which were not easy to capture, since they were mostly residential buildings with a dense population. This impasse could be overcome by innovation, and, above all, thanks to the emergence of fresh resources from external players. The appearance of fresh replenishments quickly parried the opposing side. 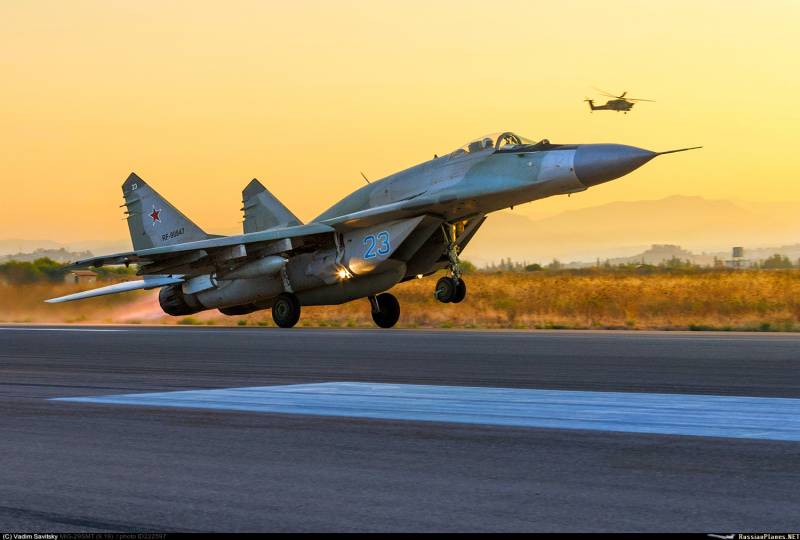 The Russians did their best to change this unstable equilibrium into stable chaos, which nevertheless worked for the pro-Asadov coalition. To this end, one or two mechanized or air-assault brigades of the Russian army could be recruited. But it was decided to limit the presence on the ground of one battalion of marines to protect the bases, and also to focus on PMCs no less than 3000 people whose losses are not so visible and sensitive [to public opinion]. 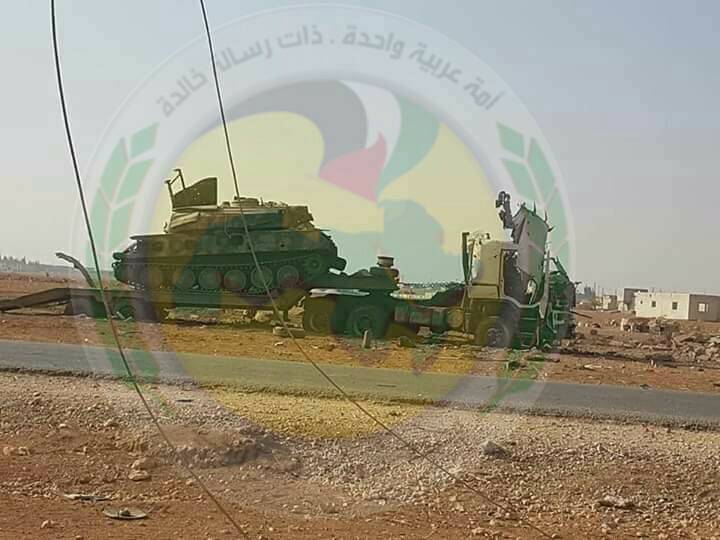 ZSU-23-4 "Shilka" and the trailer of the Caliphate, destroyed by the blow VKS Russia, the district of the city of Hama (Syria), October 2017 of the year

The tool for getting out of the tactical impasse became, using the Soviet term, reconnaissance-shock complex (RTC). The reconnaissance component consisted of a dozen aircraft, including the Il-20М1 electronic reconnaissance aircraft and several UAVs, and first of all the Special Operations Forces (MTR) group, which operated in the enemy rear. The strike component was represented by 15 howitzer caliber 152 mm and MLRS, as well as the aviation group numbering 50 aircraft (attack aircraft, fighter-bombers and combat helicopters), and their number varied in different periods of time. Initially, the KIA consisted of 1970-s aircraft, which might seem a bit primitive compared with Western standards. But for the first time the Russians began to use controlled weapons, albeit in limited quantities. But the Russian group initially could operate from the Khmeimim airbase, and then from the forward bases in Sheyrat and Tiiyas, and then from Palmyra, and then was able to increase the number of sorties (on average 1000 monthly). Russian troops quickly gained experience and compensated for the lack of high-precision weapons its mass, as well as the complementarity of the means used, greatly surpassing the capabilities of the western coalition, which relied on fighter bombers for security reasons. 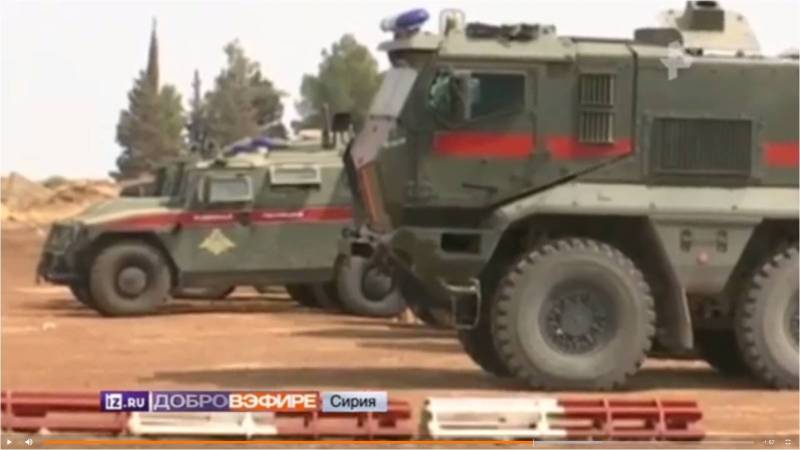 The funds involved were also limited, but well suited to the tasks and were sufficient to help mobile ground forces, which for the most part were under Iranian command, allowing them to take over in every major battle and move away from tactical environments. The fact that these funds were Russian, while people were involved in this, led to the fact that this pressure was maintained, and any foreign intervention “in the exclusive ground space” was very delicate due to the fear of escalation of the conflict.

Complementing the hostilities on Syrian territory proper, Russian military intervention made it possible to strike from long distances, which were carried out either by the Navy using Caliber missiles, or the VKS with X-555 and X-101 missiles. These attacks were too rare to be of real operational value. Their real goals lay on a different plane. It was about showing Russian public opinion, but most importantly, the Western countries that Russia has non-nuclear weapons that can cause significant damage, even to those countries that are protected by US missile defense systems, or cause significant losses even to the most modern fleets. Russia reserved the opportunity to “provide” these means of preventing TVD penetration to its allies. 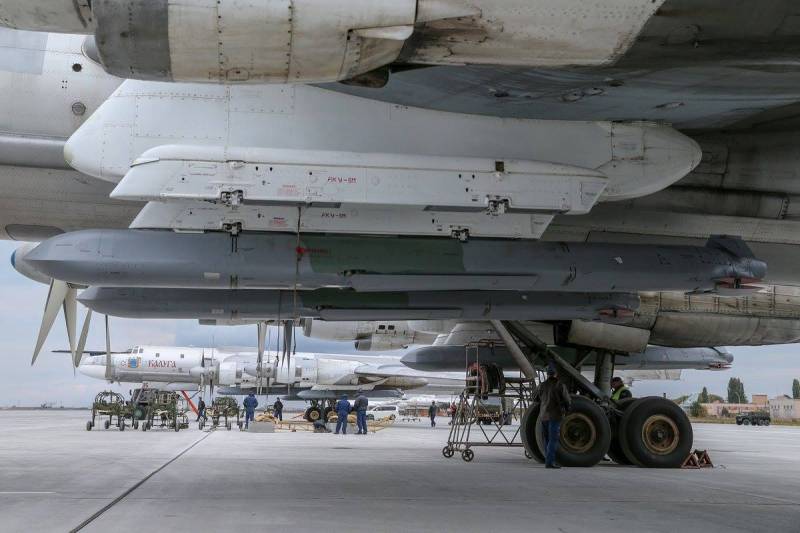 Thanks to the appearance of the Russian expeditionary corps, pro-Assad forces were able to increase the number of combined operations and quickly secure the most vulnerable territories, as well as surround, and then capture East Aleppo, repulse Palmyra and attack the enemy in the Euphrates region without interference from external forces. Loyalists almost completely control the geographical center of the conflict: the major axis of the highway M5, which crosses Syria from north to south, and around which most of the population lives. For their part, the rebels are now torn between two geographic poles - Idlib and Euphrates, which are held by Islamists, proxy structures behind which stand Turkey, the Kurdistan Workers Party, Jordan, Israel and the United States. 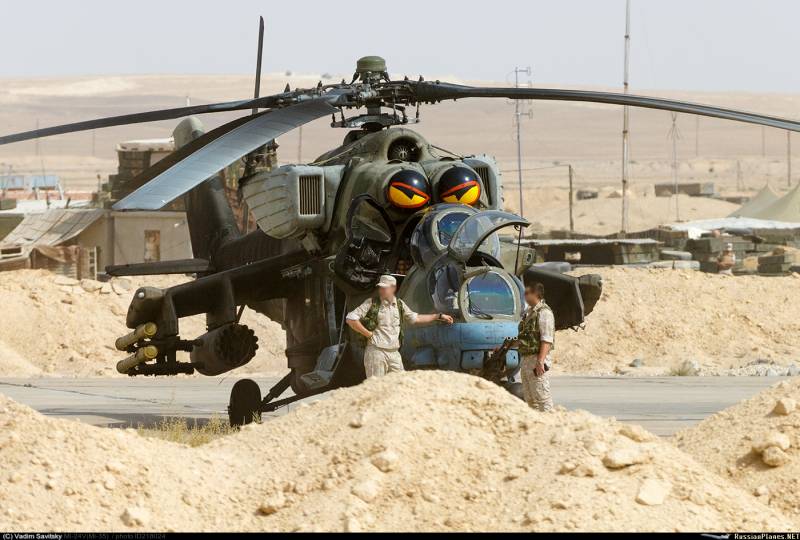 Combat helicopter Mi-35М (onboard number "33 blue") from the composition of the aviation group of the Russian Aerospace Force in Syria, 15.09.2017

These results were achieved with relatively modest means. According to the Russian Ministry of Defense, it was paid for with the lives of 37 soldiers. But this figure is undoubtedly two to three times higher, given the “irregular” formations, half of whose losses occurred in the first seven months of the 2017 of the year. Compared with the recent conflicts of the Soviet era or the post-Soviet era, these losses are very insignificant. Even during the “nine-day” war against Georgia in 2008, the official losses were higher. The main material losses at the time of this writing were three aircraft and five helicopters, lost as a result of accidents or enemy fire. The average cost of the conflict in the amount of 3 million euros per day is also quite feasible, even for the Russian economy.

The war is far from over, but Asad will not lose it, and this evolution is primarily the result of Russian intervention. This is primarily due to the presence of a clearer political vision, as well as consistent actions, as well as willingness to take risks, compared with those who support the opposition. The presence of Russians in the front row, even if it automatically led to losses, due to its aggressive behavior towards external players and a sharp increase in combat potential compared to local forces, also made it possible to unblock a tactical deadlock. Due to a better concentration of efforts and agreement on negotiations, the change became much greater than in the previous four years of war. Taking such a position, Russia also acts as a necessary mediator for any diplomatic work, and again manifests itself as a power that influences world affairs.