Everything! Aircraft carrier will not: electricity is over

January 24 2018
62
Eh! Glorious times were! This is me saying that America was ready to wipe out the offender of its citizens into powder and even could not regret a “whole” aircraft carrier for such a good purpose. Such an Internet meme got its birth during the US grenada campaign against the sovereign island state of Grenada, which showed willfulness and wished to leave the sphere of state influence and even (!) Placed Cuban advisers on its territory without asking for permission from the feudal - from the USA.


Then, in 1983, outraged by the boorish and cynical attitude of the island's governor towards the population (in the best traditions of American democracy!), Who is living in poverty against the backdrop of “guber” booze with booze and prostitutes (ashotakova)! All pro-American governors adhere to such face control, otherwise you are not pro-American!) An American protege, the public of this island (and this is an island off the coast of Venezuela with a population of 110 thousand at that time) equipped a delicious pendal to the pro-American governor, kicked him out of power residence and graciously (on his own head) allowed him to "vegetate" in his own villa. The pendal received by the Grenadian governor resonated echoed in the heads of the US State Department, turned into a jingle and this jingle in their brain became a brilliant plan to free the languishing governor, a prominent representative of American civilization on a wild and uncivilized island! The plan was good, and it was further supported by a stronger plan - to escort for this mission a whole squadron of seven warships led by the Independence aircraft carrier, a squadron of five auxiliary ships led by the tank landing and helicopter-bearing Guam, carrying 9,5, XNUMX thousand of any "creature in a pair" ie - all sorts of marines, rangers and "seals", five tanks and 30 armored personnel carriers. 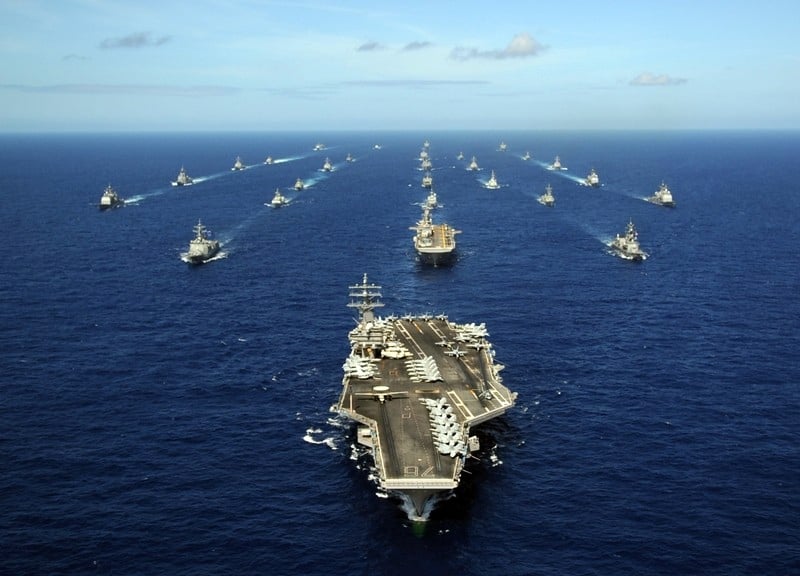 The armada described above was opposed by: 200 people of Cuban workers invited to arrange a local airport (this is how the Grenadians are the main strike force and a threat to the American grouping) 400 quadruple DShK of the same production, 600 armored personnel carriers - 5 and 23 BRDM and 8 people - Cuban advisors. Still, unfortunately for the population of Grenada, on the island at that time were 8 American students from among those taking part in an annual internship on campuses. These very students were urgently required to release, according to American politicians. Apparently - from the very annual practice.

Describe the whole battle, which began with the traditional failure actions of American warriors, it makes no sense. Whoever wants it, he will google, find what he is looking for and enjoy the description of the usual mediocrity of the US strategists. It makes sense to voice the loss ratio

From a military point of view, the operation is careless, the losses are incredible and inconvenient.
This can only be justified by the fact that the admiral commanded, and he was not given two weeks to prepare.

American students ran up to 80 people a day, or rather, calmly flew two flights of one An-24. After two weeks there would be no one to save.

Loss of defenders of the island:
17 Grenada soldiers killed.

Alas, the losing side does not report either its heroism or losses. As for the stories of American sources about this “Epos”, the myth of the heroic “Cuban builders” actually looked like this:
“There were only 200 of them and they had nothing to shoot with - they didn’t fight. They surrounded their hostels with barbed wire, held 2 for weeks and sent to Cuba. And 17 Americans were treated by wounded Cubans on a Guam helicopter carrier and they also flew home. But 47 military advisers who fought with the Americans, took refuge in the USSR diplomatic mission and flew home with our diplomats. According to the contract of the parties. "

This is all, dear readers, a prelude and an illustration of what is happening today in the land of Syria near the city of Afrin, and one more confirmation that "Wolverine is no longer a cake." And the following happens, in my opinion:

The ill-fated Kurds, who believed the American stories about the fact that now they - the Yankees - their best friends, considered themselves the accomplished masters of a state that had not yet taken place, and on this ringing wave they began to do all kinds of obscenities, namely, they began to ignore the proposals of Al-Assad about the need for negotiations on the topic settlement of the Kurdish issue on the territory of Syria, rejected the proposal of the Russian command of the Russian Aerospace Forces grouping on the same topic, and also began to unceasingly promote the remnants of Islamist radicals in vostoyanii coalition Syria - Russian VKS - Iran - Hezbollah.

Surely, the United States, launching, arming and facilitating the seizure of vast territories of Syria by Kurdish formations, promised them with a blue eye that, “as soon as, then immediately,” ie. - as soon as Turkey starts fighting against the Kurds (and for Erdogan the Kurds near the Turkish border is an abscess that can only be removed surgically), the United States will not force the aircraft carrier at the head of the squadron to defend its best friends to the Syrian desert. Fortunately, Madame Jen Psaki at one time has already suggested how this can be done, threatening AUG of Belarus. For persuasiveness, they even delivered MANPADS to frighten the “evil Turk”.

Do not scare. Trouble ... Turkey has begun active hostilities against the Kurdish enclave and has been successfully annihilating the Kurds for several days already. And already from the part of the Kurds themselves and "of all progressive humanity," cries for the innocent victims and (obviously from a professional clue from Washington) that Russia is to blame for everything. And what are the best friends? They are silent. And, if it is sensible to judge, they have nothing to oppose to the coincidence of interests of the Syrian leadership and the Turkish. And this is not just a coincidence of interests, but also an active defense of one’s interests through force. And the most interesting thing is that the position of both Turkey and Syria is supported, publicly and privately, and coordinated with Russia. What happens - Russia managed to act on two fronts? Yes, and without significant costs. And in contrast to the doubts that the positions of Turkey and the Russian Federation are coordinated, indicate consultations between the General Staffs of both countries.

But for the Kurds, the situation - the seams. Slyly made by the inhabitants of the desert put the wrong horse. And for the states, the situation is not easy. In order to declare oneself as a full-fledged and weighty participant in the conflict, there are few options - either to watch because of the sand dune, or to go to an obvious provocation, which is fraught with an answer and you can cool it up along the ridge.

Here is such a geopolitical conflict, friends, suggests how to act in the case when our closest “nebrat”, supported and lowered by our eternal “partners” off the leash, will completely get rid of and dare to grin towards Russia. It will be necessary to act on the principle of the hero of the movie "The Diamond Hand" - "I will beat gently, but hard ...!"

Ctrl Enter
Noticed oshЫbku Highlight text and press. Ctrl + Enter
We are
A great interview with Sergey Lavrov: about Ukraine, Obama and IranWhat you didn't want to know about England
62 comments
Information
Dear reader, to leave comments on the publication, you must to register.