January 22 2018
48
The crews of Su-34 bombers and MiG-31BM fighters, based on one of the airfields in the Voronezh region, completed tactical flight tasks for refueling aircraft in the air during long-haul flights, reports press office Western District. 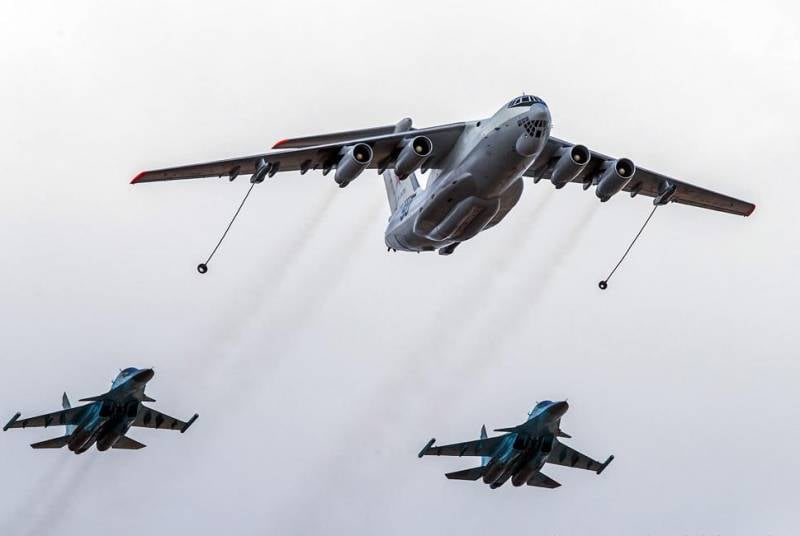 Refueling was carried out from the aircraft tanker IL-78 VKS of Russia for 8 hours. Pilots not less than the second training class are involved in the training. Testing the tasks of replenishing fuel reserves in the air significantly expands the range of operational-tactical training in combat aviation and allows you to operate in areas located at a considerable distance from the places of basing,
quoted by the press service of the deputy commander of the air defense division of the military district Colonel Roman Kosteniuk.

Performing in-flight refueling is one of the most difficult stages of flight training.

“At altitudes from 4 to 8 thousands of meters at speeds above 500 km / h, the Su-34 or Mig-31BM pilot should approach the air tanker at a distance of 10-15 meters and with the released rod, contact the tanker cone sensor, then maintain a place in I am building up to the completion of the fuel intake, ”explained in the district.

It is also reported that "to develop flight tactical missions for refueling, over Su-50 bomber pilots and MiG-34BM fighters were involved over 31." For four days, the crews performed over 120 refueling exercises both in the daytime and at night, alone and in pairs.

Ctrl Enter
Noticed oshЫbku Highlight text and press. Ctrl + Enter
We are
MiG-31BM interceptors set a new recordSudden verification of the combat readiness of the Northern Fleet, ZVO and Airborne Troops
48 comments
Information
Dear reader, to leave comments on the publication, you must to register.