Project "ZZ". Bad to be easy. Good is hard

January 22 2018
51
The school tragedy in Ulan-Ude hit the pages of the largest American newspapers. The New York Times and the Washington Post are writing about a teenager with an ax. The massacre in Russia - not only in Buryatia and Perm, but also in other cities - essentially resembles what happened in the United States more than once. The Columbine Massacre (1999) became a kind of role model. Why does the younger generation take an example from the worst? It is simple: a good way leads to a constructive one, it takes a long time to learn this, and it is enough to imitate a bad one. Hence the crowd of current antiheroes. 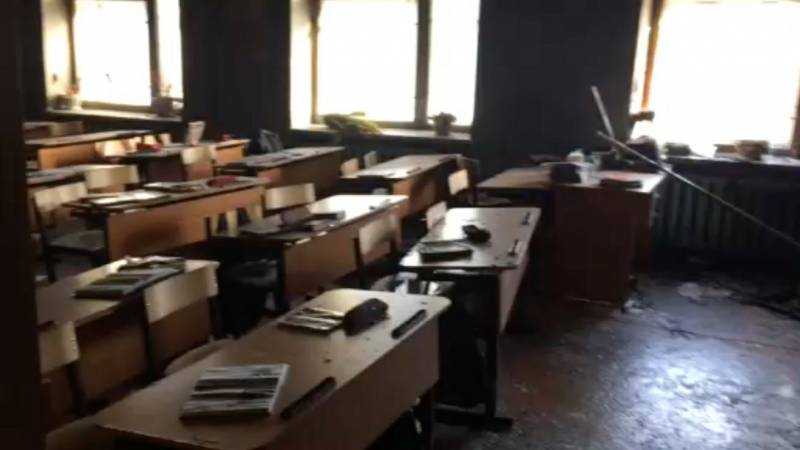 In the south of Siberia, a teenager armed with an ax, attacked classmates at school, injured several children and a teacher. This was reported by Russian officials, writes "The New York Yimes" with reference to the Associated Press.

According to the Investigative Committee of Russia, the ninth-grader entered the class during the lesson and attacked the seventh-graders and their teacher. He threw an incendiary bottle into the office and tried to commit suicide before the arrival of law enforcement officers. However, the guy failed to do this: the assailant was hospitalized.

An official investigation is underway. The motives of the teenager are not yet completely clear, indicate the American editions. The attack took place in the Sosnovy Bor microdistrict on the outskirts of the Buryat capital Ulan-Ude.

This is the second attack on the school, which happened in Russia last week. Also in the American editions it is reported that in another place two teenagers hit the children and their teachers with knives. A dozen people were injured. Then the teenagers with knives "tried to kill each other, but were detained."

As just reported Interfaxaffected by the attack in Ulan-Ude will receive compensation. This was stated by the head of Buryatia Alexey Tsydenov. Compensation amount 400 thousand rubles.

“Today we sign an order on the allocation of funds to the victims ... Everything is agreed, today the money must be brought to the people, the accounts are already open ... Since all the victims were in the hospital, and one of them is in serious condition, one in an extremely serious condition and four in a state of moderate severity All of them will receive, by analogy with federal regulations on 400, thousand rubles, of course, excluding the assailant, ”Tsydenov said.

As for the culprit of the tragedy, the teenager who committed the attack on the school, Oktyabrsky District Court of the capital of Buryatia extended the period of detention to January 11 hours 23.

The school in Sosnovy Bor has already resumed work. The tragedy is reminded by the fact that two representatives of the military police are on duty in the hall, a teacher is standing nearby. The children are now met by the director himself. Many schoolchildren came to class today with their parents. However, they are not allowed beyond the threshold.

As stated RIA News" A representative of the military police also received instructions not to let journalists inside. Allowed to enter children and teachers.

Military police will be on duty at school for at least a week, until further notice. Probably, further employees of a private security company will be hired.

A psychologist will attend the school all day.

The causes of the attack are now being investigated by the investigators. According to one of the versions, armed with an ax B. intended to take revenge on the teacher of the Russian language and literature: she recently gave him a deuce, spoiling the final grades for a quarter, reports "Baikal Daily".

Another version is based on the fact that B. has long been preparing an attack, wanting to "become famous" and repeat the "feats" of other schoolchildren. Adolescents who know B. reported that he was not distinguished by exemplary behavior, and he was often seen with cigarettes and drinks.

There is also information that the aforementioned B. was a member of the local community of the “Arrestant Unity”. AUE is a youth group living according to criminal "concepts".

The second tragedy happened at school number XXUMX in the Motovilikhinsky district of Perm. This bloody horror also hit the Western media.

“When the lesson began, two people came in and said:“ We will kill you, ”he quotes "BBC" one of the injured students of the 127 school was an employee of the Keith shopping center, where schoolchildren came running for help.

January 15 teacher Natalia Shagulina taught a class lesson for labor at 4 "B". Why did two teenagers go to her office? It is not known for certain. All the BBC interviewed people who dealt with the victims agree that the initiators of the attack entered the office consciously.

One of the attackers attacked the teacher, another blocked the door, and then both began hitting the children until they could escape from the classroom.

The Perm Department of Education stated that the teacher "took the whole brunt of herself." She was hospitalized with severe wounds. “Natalia Vasilyevna is a very courageous person. When she came to, the first thing she asked was: how are children, is everything okay? It’s a pity, he says that I couldn’t save everyone, ”said Olga Vasilyeva, Minister of Education of the Russian Federation.

Later, two groups of private security companies and fighters of the Rosguards arrived at the school. In the office number XXUMX, they found both the attackers bleeding.

As for the personalities with knives, then, according to the regional Ministry of Internal Affairs, "one of the instigators of the fight" was registered in a psycho-neurological dispensary, reports RBC. The second has already completed nine classes of this school and entered the Perm Polytechnic College named after. Slavyanova.

This second, L., was supposed to have an account on the VKontakte social network and was signed on the group dedicated to the shooting in Columbine (USA). In addition, he published on his page a video about that American tragedy.

The press notes that L. was a replicator. "He finished nine classes, - quotes "Life" parents of one of the students. - Repeatedly remained in the second year. It should be in 11, in theory. I studied badly. Previously, he was not aggressive, he was calm at school. To want to kill someone - no. His family is happy, there is a father and a mother. But he ran away from home. I didn't like being controlled. ”

If you run through the Russian media, a sad picture will open up to your eyes: blood in educational institutions in Russia is already a trend of modern times. That is why the massacre in Russian schools has already reached the American and European media.

A few days ago in high school pos. Smolny Chelyabinsk region student stabbed his "opponent". Motives are being investigated. According to preliminary data, "a weaker student tried to defend himself from the repetitionist who pestered him."

In November last year in a Moscow college were discovered bodies of third-year student A. Emelyannikov and teacher OBZH. The aforementioned Emelyannikov killed a teacher, and then published pictures on a page on the VKontakte network. Then the student committed suicide. According to version, the student settled accounts with the teacher: he threatened to expel him. Some of the student’s acquaintances linked the murder with mental opacities due to computer games.

September 2017 of the year. Teenager in school Ivanteevka shot from the pneumatic weapons to the teacher when she kicked him out of the lesson. “The boy was late for his computer science lesson. He came in ankle boots and a long black cloak. 38-year-old teacher made a remark to him because of this appearance, then she led him out of class. Pupils say that the teenager and the teacher spoke in raised voices, then there was a sound of a shot and the cries of the teacher, ”said source. 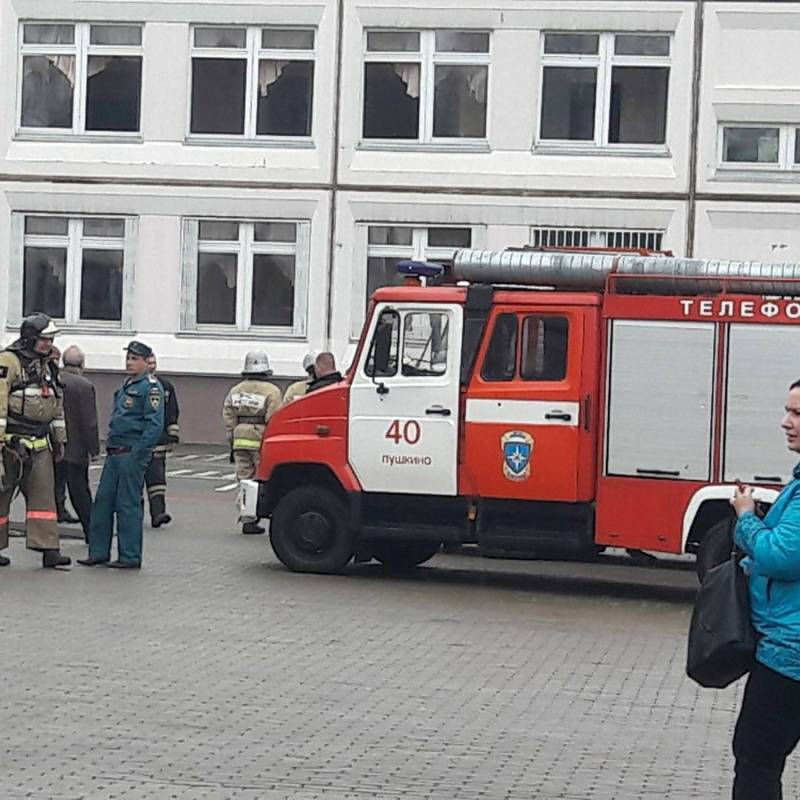 Judging by the records of "VKontakte", this student is a fan of weapons, and is also interested in mass executions in schools. There are jokes on his page like this: "A man with a gun will always find a purpose in life."

In February 2014, a high school student appeared in Moscow school №263 with a gun, from which shot in geography teacher. The latter died on the spot. When law enforcement officers arrived at the scene of the tragedy, the teenager began to shoot in their direction. One police officer was killed, the second was injured. Later this high school student was declared insane, and the court sent him for compulsory treatment. The incident described turned out to be the first case of shooting the “American scenario” in Russia.

This is not all tragic cases. Google yourself.

Even on a superficial glance it is noticeable who begins the massacre in schools and colleges. First of all, these are unbalanced types, distinguished by poor academic performance: losers and repeaters. Among the reasons that pushed adolescents to the blood, are also called a craving for “selfie” at the crime scene and a desire to “become famous”. A sample for some bloodthirsty boys are murders in the American school of Columbine.

A commission of the FBI and psychiatrists concluded: Harris and Klibold did not want to punish the offenders (which, by the way, cannot be said about most Russian cases). According to experts, the "avengers" act impulsively, killing teachers and "offenders." The teenagers who staged a bloody hell in Columbine thought “globally” and even ridiculed the other “school gunners” who were unlucky. Harris also believed that he was better than the “other” people and used expressions sort of "This w ... antz should have been shot."

In a word, not a trembling creature, but I have the right. He reaffirmed his right by the fact that America is a “free country”.

Now it seems that Russia is becoming a “free country.” “Free” for losers, repetition workers and other people who are not successful, and who are criminal-minded. You can shoot in schools and colleges, you can cut and chop with an ax. And schoolchildren, and teachers. And make a “selfie”, and then tell about your “exploits” according to different “contacts”.

The bad is always taken over easily, but the good must be long and hard to learn. The choice for the younger generation.

Ctrl Enter
Noticed oshЫbku Highlight text and press. Ctrl + Enter
We are
In the wake of the tragedies in Perm and Ulan-Ude. Shooters have already found?Olympic torch relay in the Baikal region
51 comment
Information
Dear reader, to leave comments on the publication, you must to register.