The "olive branch" does not carry the world ...

January 22 2018
33
According to biblical tradition, when the Flood stopped, the dove brought Noah, who had taken refuge from the deadly elements in the ark, with an olive branch. It was a sign that the Almighty is no longer angry with people. Both the dove and the olive branch have since been considered symbols of peace. On the UN emblem, an olive branch has twisted around the globe, and this should have symbolized the slogan “No to War” ...


But today, the "Olive Branch" is called a military operation. Well, this is reminiscent of the blasphemy of the NATO bloc, which called the monstrous bombardment of Yugoslavia - the operation "Merciful Angel". 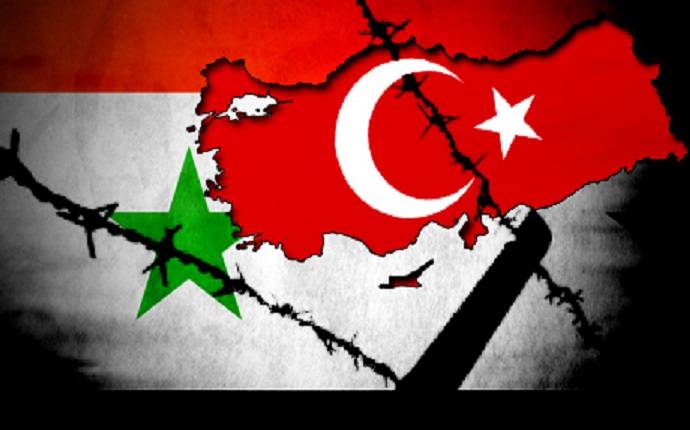 20 January Turkey announced the start of operations in Syria against the Kurdish armed forces. The Turkish Air Force is bombing targets in the Syrian city of Afrin, controlled by the Kurds. During the first day, 153 targets were hit, and 45 smashed objects are now being reported. According to the Kurdish self-defense forces, six civilians and three fighters were killed, another 13 people were injured.

Turkish Prime Minister Binali Yıldırım on January 21 announced the ground phase. According to the latest newsTurkish Tanks entered Afrin with the support of gangs of the "Syrian opposition" (the so-called "Syrian Free Army").

By starting this operation, Turkish President Recep Tayyip Erdogan came into conflict with Washington. Earlier, the United States announced the creation of a new force opposing the legitimate Syrian leadership - the so-called. "Security detachments". According to this plan, these units should consist of Kurds loyal to the United States and funded by them, and be located on the Syrian-Turkish border.

Of course, this turn of events did not appeal to official Ankara. Erdogan can be understood - if the Syrian Kurds, with the support of the United States, become a serious force and decide to proclaim their own "state", this could provoke the Turkish Kurds to revolt. At least, the situation in Turkey will seriously aggravate, old problems will emerge ...

The United States and Turkey have long tormented Syria together. As soon as the confrontation between the legitimate Syrian authorities and the (then "moderate") pro-American "opposition" began, Ankara joyfully joined all punitive measures against its southern neighbor. And this is despite the fact that the earlier Turkish-Syrian relations were not hostile. Under Bashar al-Assad, they were getting better. But Washington said Fas, and Ankara replied: “Yes!”, Without considering the consequences. And the gangsters gathered from all over the world poured into Syria from Turkey weapon and material assistance for militants. The “opposition” of the Turkish masters did not let down — the plundered wealth of the Syrians flowed to the Turkey from the occupied Syrian regions — equipment of factories and plants, cultural property, oil, even bread ...

Now the Turkish leadership fit to "bite your elbows." The United States, in its quest to weaken Syria as much as possible, supports the unhealthy tendencies of Kurdish separatism. With their Turkish “NATO brothers”, the people sitting in the White House and the Pentagon did not count. Erdogan now has to put pressure on the Kurds in Syrian territory. That while the Turkish army violates the sovereignty of a foreign state, of course, Recep Tayyip is not a bit embarrassed - before that Turkey had repeatedly interfered in the course of the conflict, including directly (as it happened, for example, during "Kasab city in the Syrian province of Latakia).

Of course, Syrian President Bashar Al-Assad opposed such a brazen invasion of his country. According to him, "aggression in the Syrian city of Afrin cannot be separated from the policies pursued by the Turkish regime since the beginning of the Syrian crisis and built on the support of terrorism and various terrorist groups».

But it is clear that now the Syrian army will not be able to repel an invasion. She has more pressing tasks, such as, for example, getting rid of terrorists from the province of Idleb and the Eastern Guta area in the province of Damascus. Moreover, many Kurdish forces, fairly stuffed with American help, do not show loyalty to Damascus, but, on the contrary, dream of separation from the country. The Russian Foreign Ministry also condemned the Turkish invasion of Afrin, but it can be expected that the case at this stage can be limited to condemnation.

At the initiative of France, the situation should be considered at a closed meeting of the UN Security Council. On this occasion, Turkish Foreign Minister Mevlüt авavusoglu said that his country considers bringing the issue of Afrin to the discussion of the UN Security Council as “taking the side of terrorists”. All this is reminiscent of the vile and dirty fight predators because of the division of prey.

In such a situation, the Kurds should understand that their dreams of their state are used by the USA for purposes far from the interests of the Kurdish people. And it is precisely the separatist and anti-Syrian positions of individual Kurdish leaders that have led to their present plight. This is a good lesson, for which, unfortunately, you have to pay a huge price ...

The position of the forces that sincerely wish Syria for peace should be unambiguous - all those whom they did not call in the country should not be in it and, moreover, should invade it, as well as arm the militants. This applies equally to the United States and Turkey.

Ctrl Enter
Noticed oshЫbku Highlight text and press. Ctrl + Enter
We are
Reports from the militia of New Russia for 27-28 September 2014 of the yearResults of the week. "Either true or all is well"
33 comments
Information
Dear reader, to leave comments on the publication, you must to register.