January 23 2018
15
Even before the start of one of the largest exhibitions weapons and equipment SHOT Show in Las Vegas, many manufacturers have announced their new items. The Brazilian company Taurus, which added a new model of a revolver to its catalog, was no exception. A remarkable feature of this weapon is that it is multi-caliber, that is, it can use a variety of ammunition, in particular, we are talking about .38 Special, .357 Magnum and 9x19 cartridges, though for the latter it will be necessary to replace the barrel in the revolver. I think that those who know the metric parameters of the cartridges and history the appearance of .357 Magnum, already smiling from such a "multi-caliber" weapons. However, it would not be superfluous to clarify the situation.

What is generally multi-caliber in the view of a sensible person? Multi-caliber is the possibility of using cartridges in weapons that are different in their metric and other characteristics. Implementing such an opportunity is actually not so difficult, as has been repeatedly demonstrated by various manufacturers. However, the real ability to use various ammunition in weapons requires a minimum of barrel replacement for each ammunition, or even partial replacement of the bolt group. 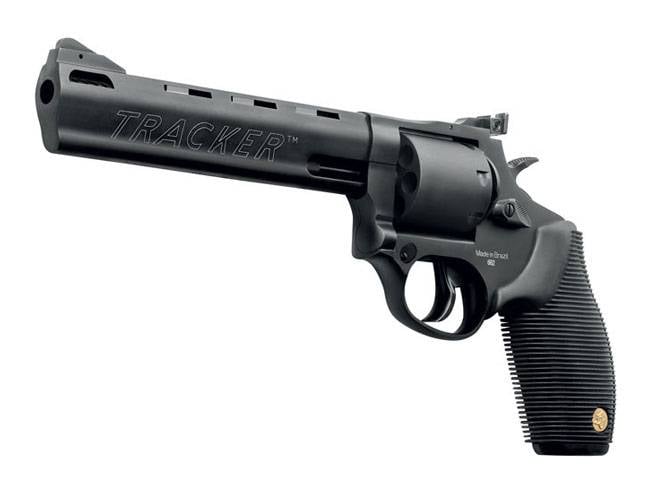 In other words, it is necessary to adjust the barrel bore to the diameter of the bullet, and the chamber to the dimensions of the weapon case. In any revolver, the chamber chamber is played by the drum chamber, which in Taurus 692 does not change for all three variants of ammunition and only one of them needs to replace the barrel of the weapon. That is, the revolver can use at least two different cartridges without any changes in the design, so we can safely say that the weapon is multi-caliber. But there is always one “but” and a thousand reservations. Let's take a closer look at the .38 Special and .357 Magnum ammunition.

The .38 Special cartridge appeared as early as 1898, has long been the main cartridge for US police revolvers and is still considered one of the best cartridges for revolvers used as a means of self-defense. This ammunition did not appear out of nowhere. Its predecessors were the .38 Long Colt and .38 Short Colt, all three ammunition differ only in the length of the sleeve and, accordingly, the powder load. However, no matter how good ammunition is, there will always be a moment when something better is needed. Such a moment came during Prohibition in the United States, when the police needed more effective weapons than Smith & Wesson Model 10 revolvers.

It would seem that there is no problem in this, by that time there were quite a lot of pistols and revolvers for sufficiently powerful ammunition - take it and replace it, only there was no money for rearmament, therefore another solution was found. They decided to modernize the .38 Special cartridge, and in exactly the same way as it was with the .38 Long Colt - by lengthening the case and, accordingly, increasing the powder charge. Unfortunately, it was impossible to use this ammunition in the Smith & Wesson Model 10, since the design of the revolver could not withstand more powerful ammunition. Outwardly, the changes affected only the dimensions of the cartridge, in particular, the sleeve was lengthened from 29,3 millimeters to 32,8 millimeters, that is, if the strength of the revolver design allowed, then it would be possible to use the new cartridge in it. To avoid confusion with the old cartridge, the new ammunition received the designation .357 Magnum, although the diameter of the bullets in both ammunition is 9,12 millimeters.

From this we can conclude that if the revolver is designed for the .357 Magnum cartridge, then it is safe to charge both the .38 Special and the more ancient .38 Long Colt and .38 Short Colt, they differ only in the length of the sleeve. So marketers of the Taurus company could boldly add two more types of cartridges increasing the imaginary multi-caliber weapons.

And what about the cartridge 9х19, which can also be used in the Taurus 692 revolver? With this ammunition, everything is somewhat more complicated. First of all, the sleeve of the cartridge 9х19 does not have a collar, because for fixing the ammunition in the drum are used munclips, which the manufacturer puts in the set to the weapon in the amount of two pieces. Needless to say, cartridges differ in metric characteristics. So, in order for the weapon to be able to use ammunition with a 9,01 bullet diameter of a millimeter, the barrel must be replaced. It would seem that the difference in 0,11 of a millimeter is insignificant, but it matters, besides, the trunks differ in grooves. Much easier with the diameter of the drum chamber. The sleeve diameter of the 9х19 chuck is equal to 9,93 of a millimeter, while the .357 Magnum has a sleeve diameter equal to the 9,63 of a millimeter. The way out of this situation is simple - drill a chamber under the 9х19 to the length of its sleeve, and the rest to drill under the .357 Magnum. The drilled drum chamber itself probably didn’t allow adding .38 Long Colt and .38 Short Colt to the list of used ammunition, and not the age of these cartridges. Although Long Colt would still reach the narrower part of the chamber, but Short Colt would cling to it only a corner of a millimeter 0,25

In general, multi-caliber is really present between two calibers, so that no one seems to have deceived anyone, but the feeling that the manufacturer is not completely honest in this matter remains.

In addition to the so-called "multi-caliber" revolver Taurus 692 does not stand out more than absolutely nothing. This is a regular drum revolver with 7 chambers that leans to the left to recharge. The trigger mechanism can be in two versions: single and double action. 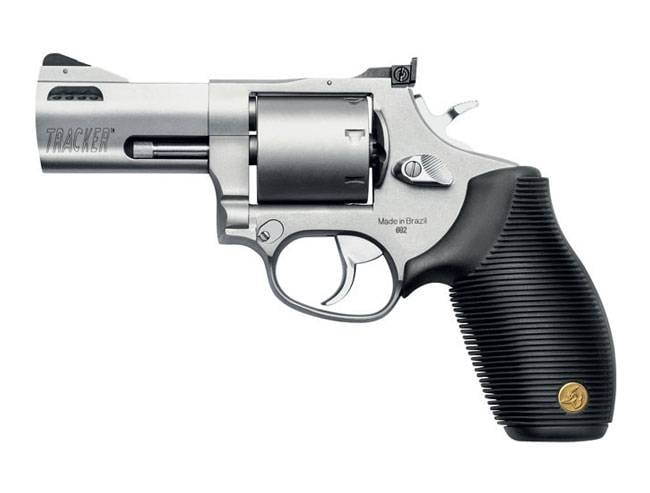 Also, in two versions, this weapon is offered in such a parameter as the barrel length, with a length of 76 millimeters and 165 millimeters. In addition, there are two color options for stainless steel and black. Total we get 8 variants of the same weapon.

An interesting point in the revolver can be identified aiming devices, namely the goal, which is regulated both in height and horizontally.

To reduce the throwing of weapons when firing in the front of the barrel holes are made through which the powder gases make the revolver more stable.

On the trigger of the revolver there is a security lock already accustomed to Taurus products. This lock blocks the trigger mechanism, which ensures the safety of the weapon in case it falls into the hands of a child. 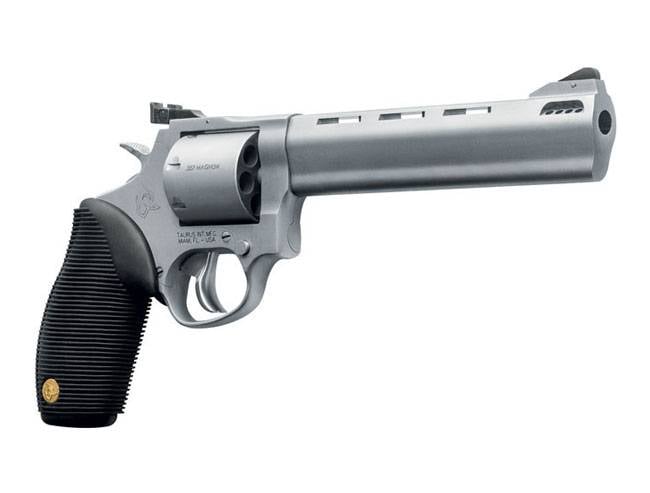 Handles of revolvers have a rubber coating resistant to both temperature extremes, and to ultraviolet rays. Such handles have become an integral part of the revolvers of the company Taurus and cause only positive emotions from the owners of weapons. They have only one drawback, they collect dirt from hands very well, so it’s better to wash your hands before using a weapon, because cleaning the handle of a revolver is much more difficult than it seems.

Characteristics of the Taurus 692 revolver

For a revolver with a barrel length 76 millimeters correspond to the following parameters. The mass of weapons without ammunition - 1 kilogram. Overall length is 207 millimeters. Height - 144 mm. Thickness - 39 millimeters.

For weapons with a barrel length equal to 165 millimeters, the total length is equal to 29,5 millimeters. Weight is 1,3 kilogram. The thickness and height correspond to a more compact version of the weapon.

Both versions of the revolver are fed from a drum with a capacity of 7 cartridges.

As it turned out with a closer look at the Taurus 692 revolver, this weapon is not remarkable. This is the most common revolver without any original and interesting solutions. Yes, it has the ability to use different ammunition, but the same possibility is present in many other revolvers after replacing the barrel and drum, and the list of cartridges that can be used by many manufacturers is much wider. 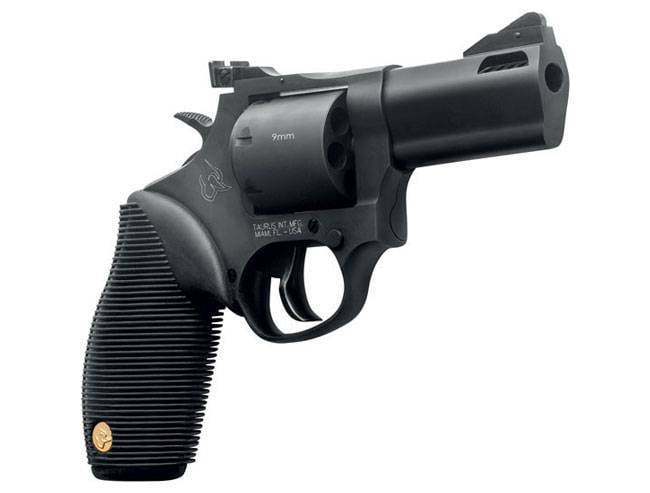 By themselves, revolvers have already worked out over the years the design, and make them bad, with appropriate quality control, is simply impossible. As well as making them superior in the characteristics of competitors is impossible without changes in the design.

It remains to hope that the Brazilian arms company did not show everything that they have, and saved something interesting for the SHOT Show, where for the last two years it has shown interesting, not quite ordinary and original weapons with non-standard, albeit controversial solutions.

Ctrl Enter
Noticed oshЫbku Highlight text and press. Ctrl + Enter
We are
Magnum .44, Clint Eastwood and other bigRussian revolvers
15 comments
Information
Dear reader, to leave comments on the publication, you must to register.